You're in the Army Now!

So you're in a zombie apocalypse.  The neighbourhood is overrun, the vigilantes have run away and the cops can't cope.  What to do?  Send in the army; it's bound to work!

For fighting off zombies, evacuating civilians and guarding base perimeters, you need foot soldiers.  These squaddies are basic plastic troopers from EM-4.  With a little bit of filler, these are decent figures, though their guns are a bit crude.  Still, they are some of the cheapest 28mm figures around, so I'm not complaining!

Here's a close-up of the lieutenant, radio operator and a rifleman.

For support weapons, we're spoiled for choice.  Again, these models are from EM-4, but this time the standard plastic bodies have the cunning metal heavy weapons parts fitted.  From the left: chain gunner, missile launcher, recoilless rifle, flamethrower and autocannon!  Truly the zombies don't stand a chance!  Neither do the houses, gardens, parked cars or lost kittens...

No self-respecting modern soldier is going to walk to the zombie apocalypse!  In any case, they'll need buses, trucks or other such vehicles to be able to evacuate the civilians.

These may look like Hummers, but they are really General Purpose Vehicles (GPVs) from Ebbles Miniatures, now sold by Genet Models.  Compared with many civilian cars, these are quite big.  I don't mind that in a military vehicle; it makes them feel a bit more intimidating!

The GPV kit comes with a choice of 6 colour schemes.  As I mentioned in a recent post here, I forgot which scheme I had used for my first two models when I printed off the second two.  Consequently, they're not quite the same colour.  Bother.  The lead vehicle has been armed with a .50 calibre machine gun, but TOW and grenade launcher options are also available.

A word of caution: I've made several of these GPVs now.  I consider myself to be quite experienced, but the combination of wheel arches and the slopes where the sides meet the underside make it quite the most tricky card model I've ever assembled.  Don't get me wrong; when completed it's a fine model of a very versatile subject.  Possibly not one for the raw beginner, though. 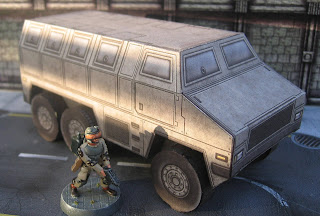 The Armoured Patrol Vehicle (APV) is a lot bigger than the GPV.  It also comes from Genet Models and so has the same look and feel.  It looks as if it could easily carry an entire squad of 10 or more troops and all their equipment (good luck getting that missile launcher or recoilless rifle into a GPV!).   The same weapons kit fits both models; I will probably arm this vehicle before using it on the games table. 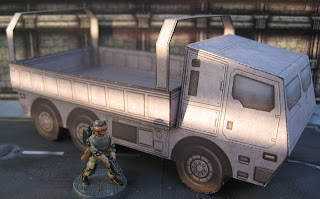 If you thought that the APV was big then this military truck is huge!  Again the kit comes with a range of colour schemes, but this time it also has a number of different backs that can fit on the same chassis.  I've made this one up as an open cargo truck, but covered trucks and tanker versions are also possible.  It's a nice, easy model to make, but I think I'll scale down further printouts rather than making them at the default size.  It's just too big; easily 2 or 2.5 times the height of a man!

With a few more grunts and some trucks, this lot should be able to rescue any embattled citizens from the rampaging hordes of zombies.  Whether the civilians wish to be rescued and taken to a refugee camp or not...