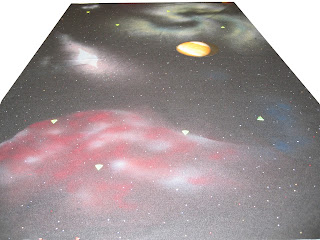 The Klingon 14th Battle Squadron has been dispatched to the Kzinti border, where there are rumours that a hostile task force is trying to break through the frontier.  Both fleets have spread out their ships so they can search wider volumes of space.  Near the 5th planet in the uninhabited Felixis system, contact is made between the lead elements of the hostile squadrons.  Reinforcements are summoned immediately, but they'll take some time to arrive.  Which side will build up their forces quickly enough to overwhelm their enemies?

For this game, I decided to take the "escalating engagement" scenario from Battlefleet Gothic and adapt it for Full Thrust.  So, here's how it goes:

We played this scenario using my Klingon and Kzinti fleets, to a value of 1000 NPV.

As can be seen from the above, 3 of the 4 Klingon groups were somewhat above the average points value for a group (250 NPV), whereas the Kzinti had 3 weak groups and 1 very powerful one. 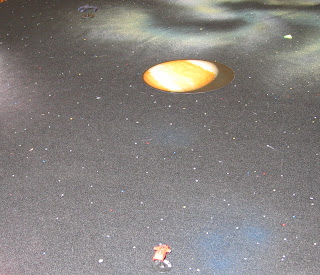 I (as Klingon commander) chose to test for the Relentless first and was immediately successful - the battlecruiser was placed on the table first.  Then the Kzinti player (my son) diced for each of his groups in turn, finally getting a success for his last choice - the destroyer Tiger.  This looked like a very uneven match-up, but perhaps the Tiger could play hide-and-seek around the gas giant until help arrived?  At least the 2 ships were initially out of range... 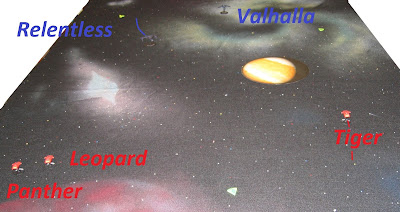 As the Relentless accelerated towards the small Kzinti ship, reinforcements started to arrive.  For the Klingons, the cruiser Valhalla warped in, while the Kzinti gained another 2 destroyers.

Despite the best efforts of the smaller ships to scatter, the 2 large Klingon vessels tore them apart.  Only the Leopard survived the initial volley, though this was something of a mixed blessing as she took a bridge critical hit and was heading straight for the planet of Felixis V!

Just before we determined the 3rd and final groups of reinforcements to arrive, the Kzinti played a Mines event card.  He rolled a '4' for the number of such weapons left over from a previous war and gleefully deployed them around my 2 remaining possible entry points. 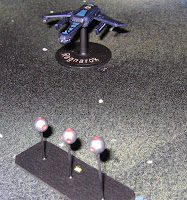 The Klingon cruiser Ragnarok duly arrived.  Fortunately for me, she scattered 4" away (backwards!) from her FTL exit point (mines have an activation range of 3" in Full Thrust).  Unfortunately, she was now heading straight at the mines.  The captain immediately ordered a full deceleration and spent the next few turns pivoting on the spot until she could move away slowly from the threat.  Ragnarok played no useful part in the remainder of the game. 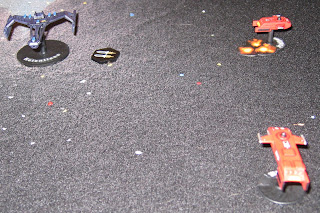 Predictably, on the Kzinti side their last reinforcement was the light cruiser Claw.  Despite being heavily outnumbered (1 CL vs 1 BC and 2 CA), she attacked the Klingon battlecruiser, launching missile salvos as fast as she could!  The Klingon captain was somewhat taken aback by this and ordered that all weapons which were capable should fire on the missiles.  Consequently, return fire at the bold Kzinti ship was light and she took little damage.  Indeed, on this turn one of the missiles breached the defences and the Relentless actually received more hits than she gave out! 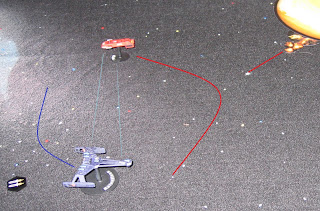 As the Kzinti destroyer Leopard finally ploughed into the planet, the Claw and the Relentless circled each other.  The smaller Kzinti ship was firing missiles for all she was worth and would soon empty her magazines - but what else could she do?  If she let the Klingon battlecruiser get a clean shot at her then the light cruiser wouldn't stand a chance at this range! 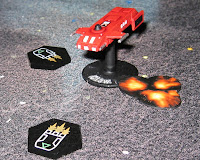 Even as she launched her final volley of missiles (all of which missed or were shot down), the Claw received massive damage from the enemy flagship.  The Klingons, impressed by the way she had fought, held their fire while the Kzinti crew abandoned ship.  However, before the Klingons could board the crippled Claw and claim her as a prize, her damaged warp core blew up!

Sometimes, life just isn't fair!  For the Kzintis, their weakest ship arrived first and their strongest one didn't arrive at all.  For the Klingons, it was exactly the other way round.

What could the Kzinti have done differently?  Perhaps a more balanced fleet composition would have helped, though it's worth pointing out that if the gamble had paid off and the Shadowcat had arrived first then the outcome might have been quite different.  Alternatively, each Kzinti ship that arrived and saw that it was hopelessly outclassed should have attempted to go straight back to warp.  This might not have been successful in all cases, but at least some of their ships might have escaped!