A few Character Cards for ATZ

We've been out today at the cinema, seeing The Hobbit: Desolation of Smaug.  Since the film is quite long and travelling to even our nearest cinema takes a while, I haven't much time for today's post.

I thought it would be nice to remind people about one of my earliest blog posts: ATZ Character Cards.  This was a surprisingly popular article (well, it surprised me) and that early success helped a lot in making me decide to continue blogging.

Anyway, there has to be something new in this post, else you'll all get bored and go away.  I've designed a fair number of new characters for All Things Zombie since the initial publication.  My oldest son has also prepared some cards for his own miniatures.  Here are some of them; see what you think...

Doctor Pertwee is an eccentric old academic, but very much a man of action rather than an ivory tower dreamer.  He has an extraordinary ability with machinery, though his strongly-held principles won't allow him to attack anything.  His female companion is fond of adventure, but tends to lose her head when danger looms. 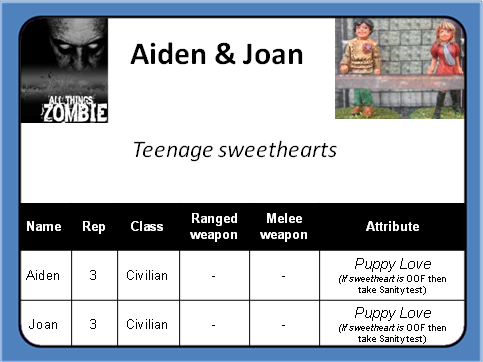 "And they called it puppy love..."  These 2 teenagers are besotted with each other; if anything happened to one of them then the other would surely die! 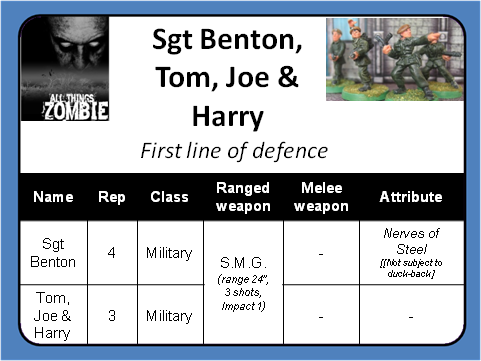 There's a very strong trope (I can't think of the name) that has most of the soldiers in a unit, players in a team or buddies in a group as fairly useless.  It's up to the square-jawed leader to save the day.  So it is with these guys too...

That's all for now, folks!  Until next time, goodbye...