Amongst the Orion pirates, the MacTavish cartel (it's a long story) is known for taking risks.  This time they may have gone too far, though.  One of their squadrons, desperate for supplies, has arranged a rendezvous with the Minotaur, a large freighter carrying fuel and spare parts.  However, in order to avoid attention from Starfleet, the agreed meeting point is in a sector claimed by the Tholians.

Unfortunately for the MacTavishes, these xenophobic aliens have encountered the freighter already and have immobilised it with one of their strange energy webs while they await instructions from their leaders.

The Orion squadron must rescue their supply ship and escape before Tholian reinforcements arrive.  For their part, the Tholians are well aware of the wealth of materials that the freighter is carrying, as well as the possibility of useful data on the pirates' operations, so capturing the merchantman would be good! 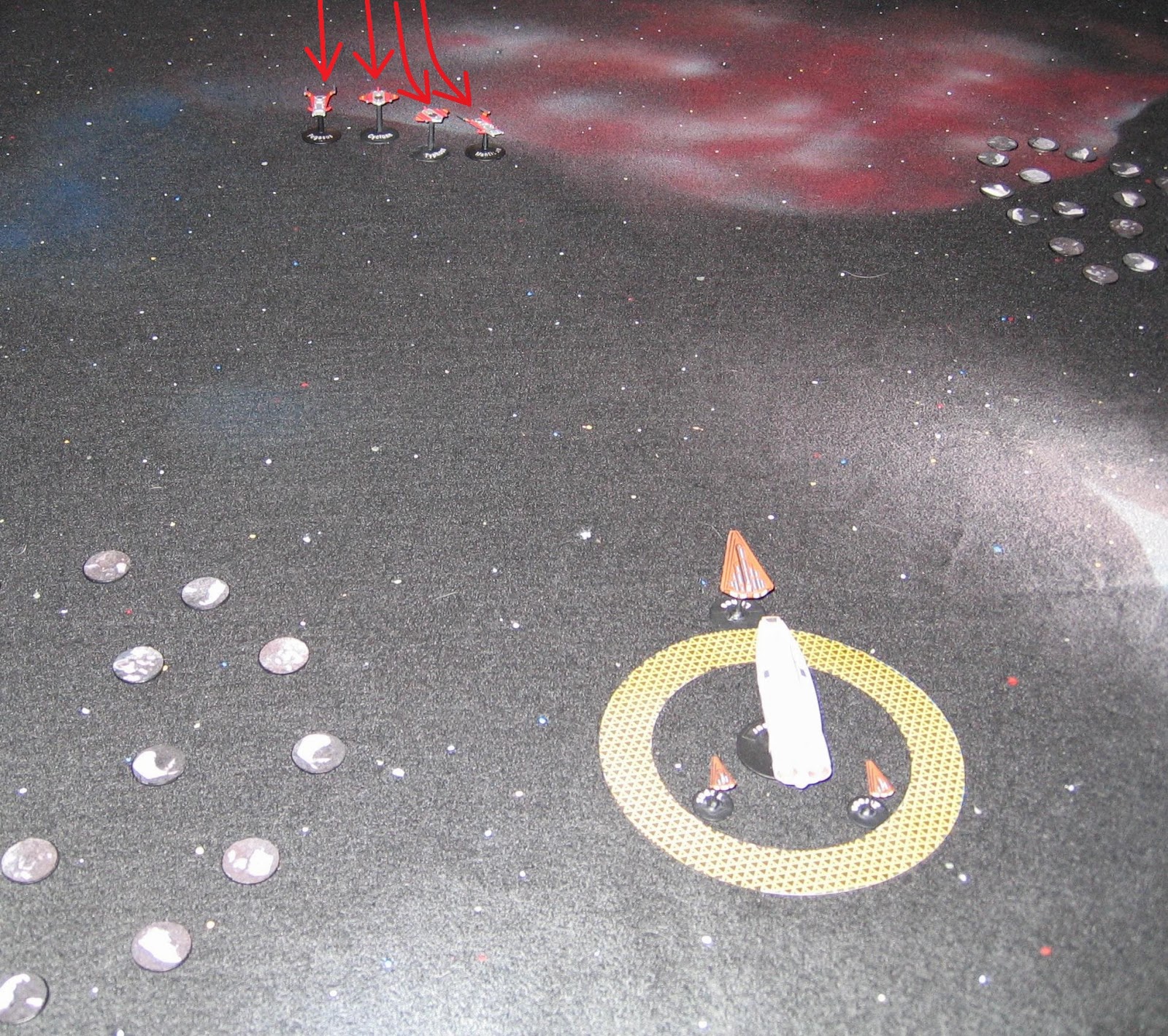 Seeing that the Tholian cruiser was outside the web and on its own, the Orion squadron accelerated hard. They planned to obliterate the larger enemy vessel before braking and turning sharply.  The smaller Tholian patrol craft could be mopped up at leisure. 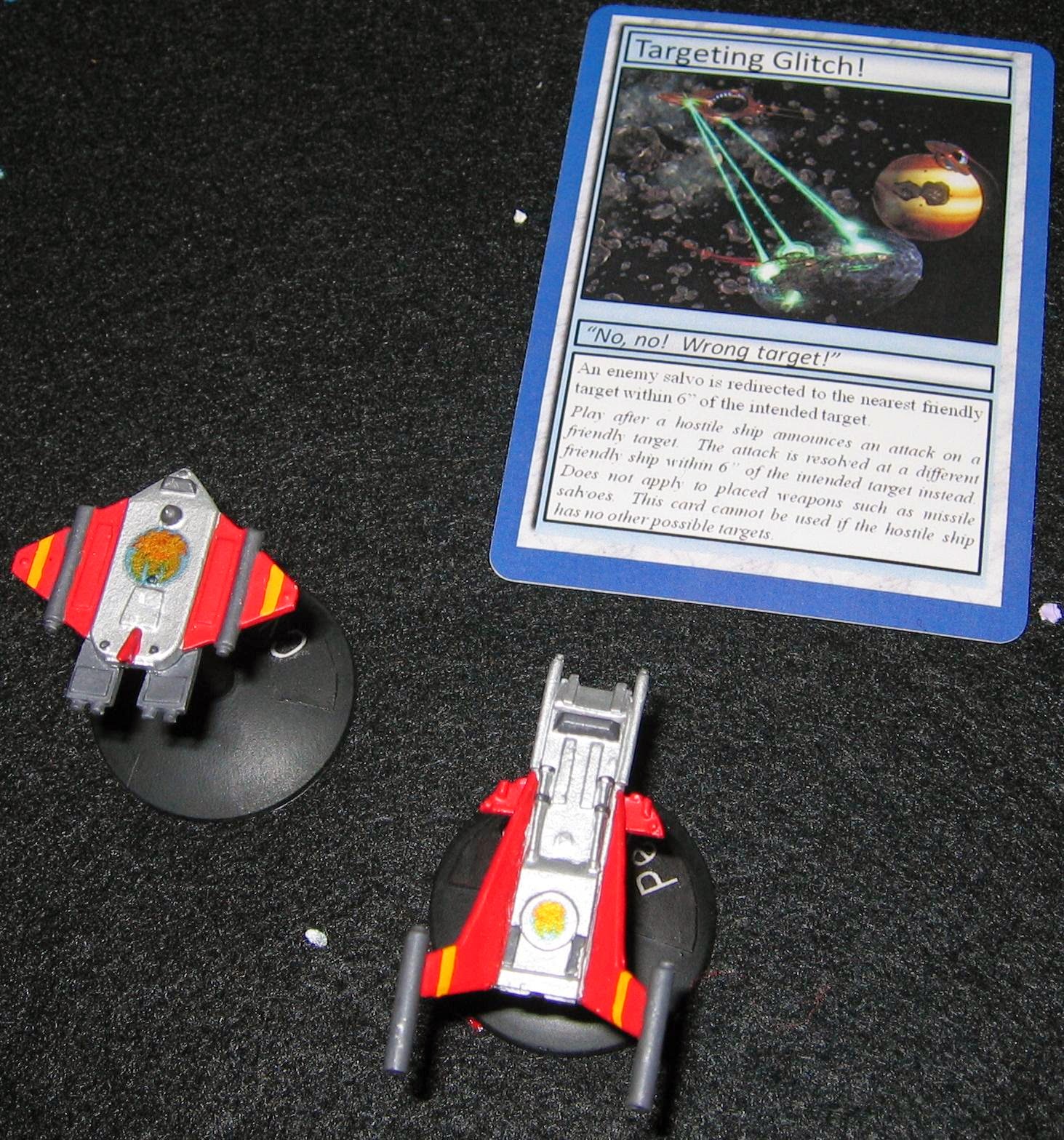 When the Orion squadron reached effective range, things didn't go quite according to plan, though.  The Orion light cruiser Pegasus prepared to fire on the agreed target, but suffered a software fault in her targeting arrays.  Her entire volley was directed at the small Tholian corvette Topaz instead.  Even though the Topaz was partly shielded by the energy web, the tiny vessel took 3 damage points out of her allotment of 4 (a triple threshold check) and virtually every system on the ship went offline.  With the bridge wrecked and life support failing, the remaining crew abandoned ship. 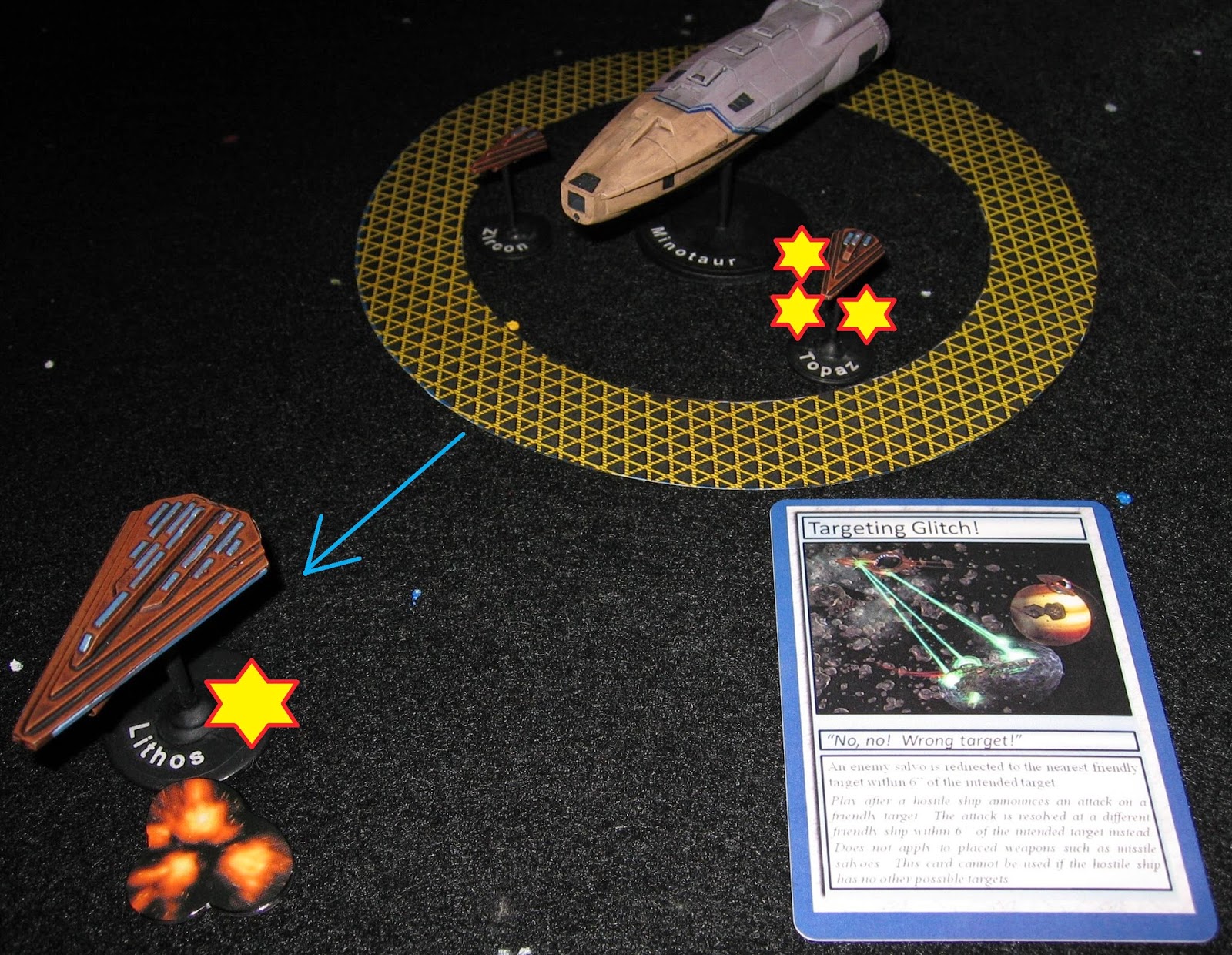 This mistake didn't save the Lithos though, as the other 3 Orion ships all pummelled the Tholian cruiser.  In particular, the heavy destroyer Cyclone scored a runaway series of '6's, causing massive penetrating damage that (amongst other things) knocked out both of the Lithos' fire control systems.  Without these, she couldn't fire back!

Bizarrely, the Cyclone was then struck by a severe energy vortex which spun the destroyer almost back in the direction from which she had come.  Perhaps it was an effect of the over-charged phaser volley she had just fired, or maybe a spatial anomaly caused by the strange Tholian weapon?  Whatever the cause, the Cyclone didn't try to rejoin the rest of the Orion fleet.  A combination of asteroid fields and high speed would have made such a manoeuvre quite risky!  Instead, over the next couple of turns she sailed off the table. 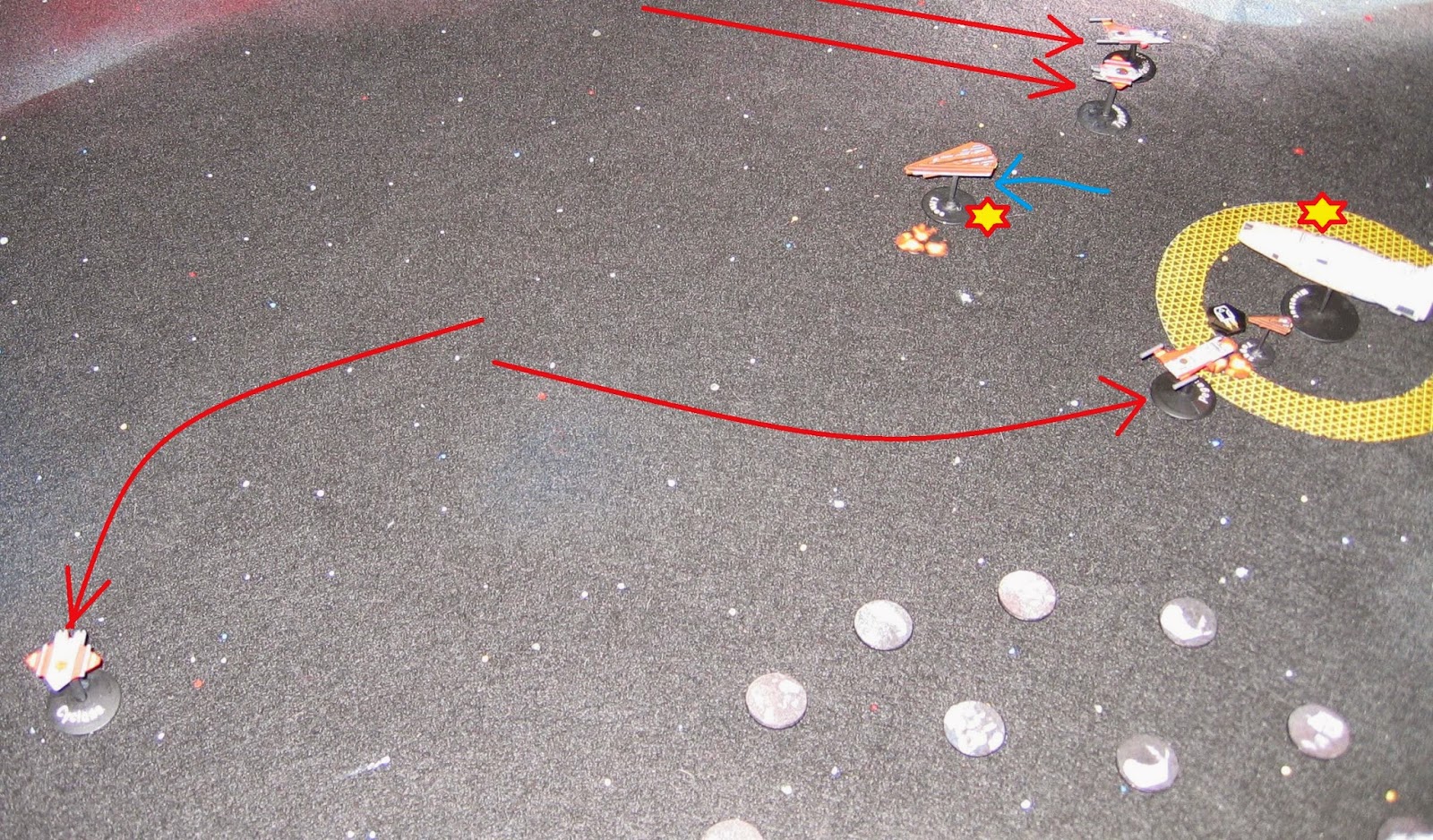 The Orion ships were braking hard now, but they were still going to overshoot the freighter.  Almost contemptuously, the cruiser Manticore swatted the second Tholian corvette (Zircon), thus leaving the web without any power.  At the same time, the other Orion ships continued to hurt the crippled Tholian cruiser.  This time, the damage caused her warp core to go critical and her internal life-support atmosphere boiled away into space through the gaping holes in her hull. 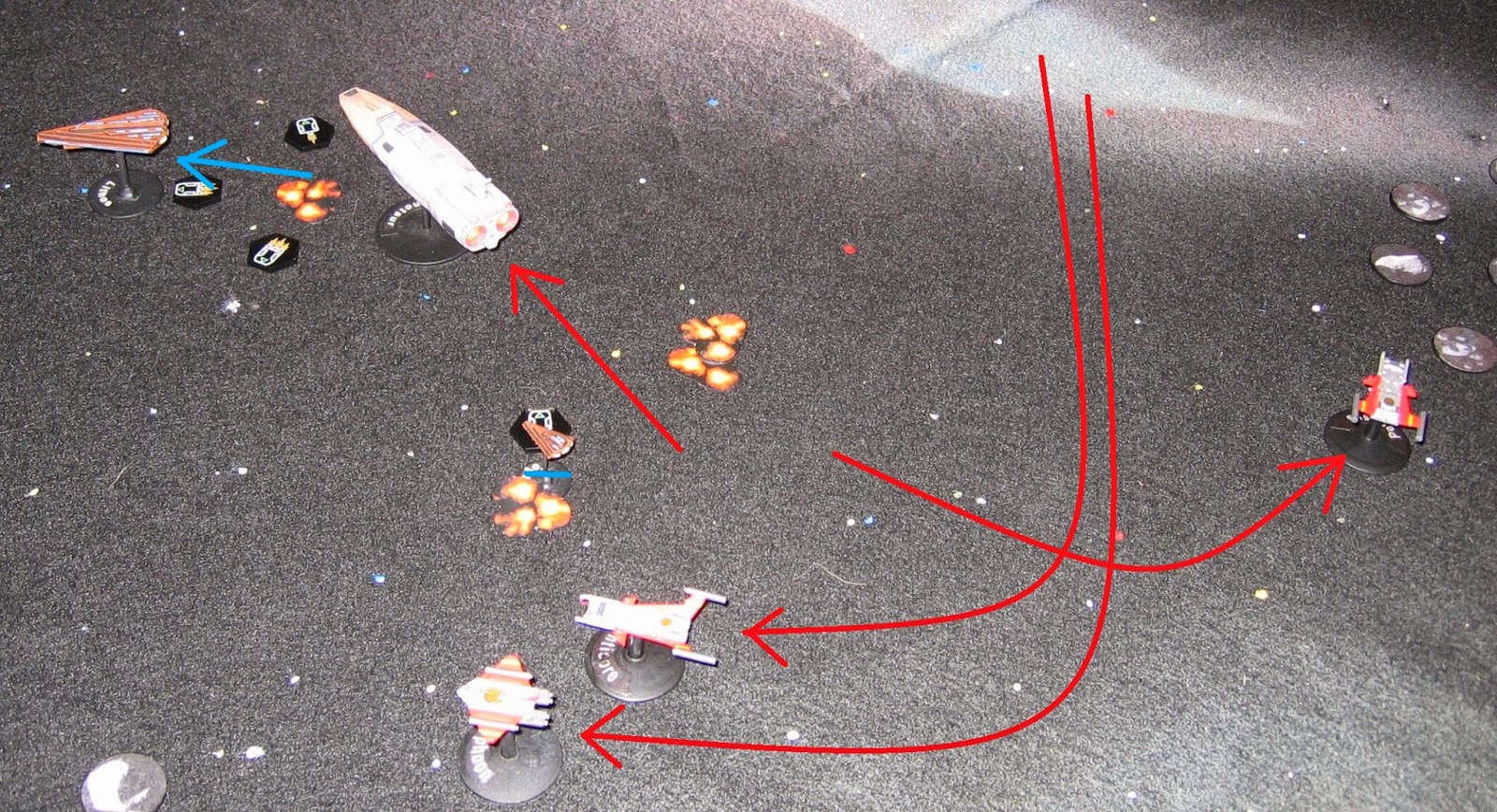 As the web collapsed, the freighter Minotaur was finally able to move.  She started to accelerate in order to escape, but painfully slowly.  Meanwhile the Orion ships turned hard and the Tholian cruiser drifted away slowly, abandoned by her crew.  This was (I think) turn 7, and still the Tholian reinforcements hadn't arrived! 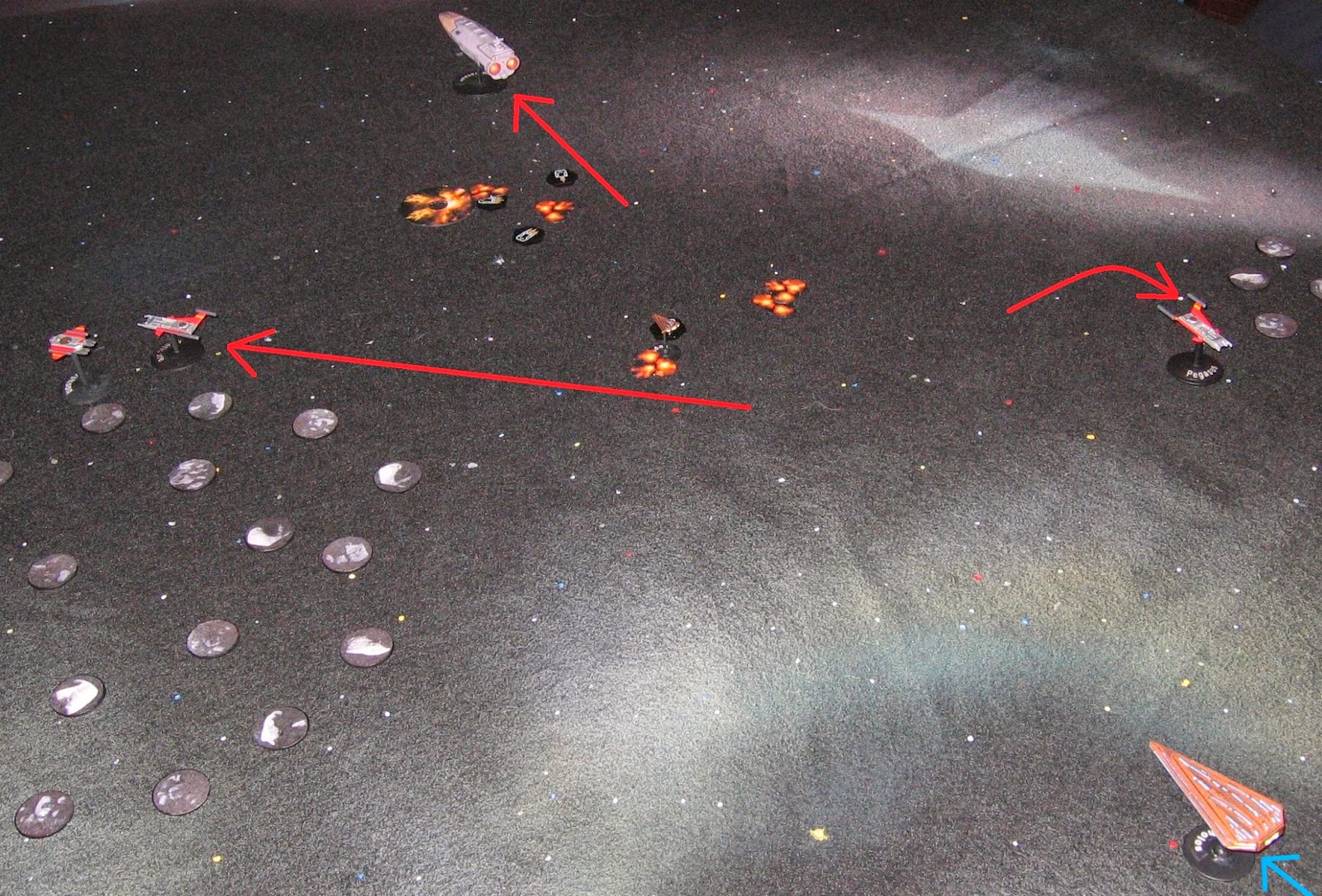 Finally, the Tholian battleship Tholos thundered on.  She was a long way from the action, but travelling at high speed.  Could she catch the Minotaur before the merchantman escaped?

In a bizarre mistaken order, the light cruiser Pegasus actually turned towards the huge battleship, though the other 2 Orion warships both fled. 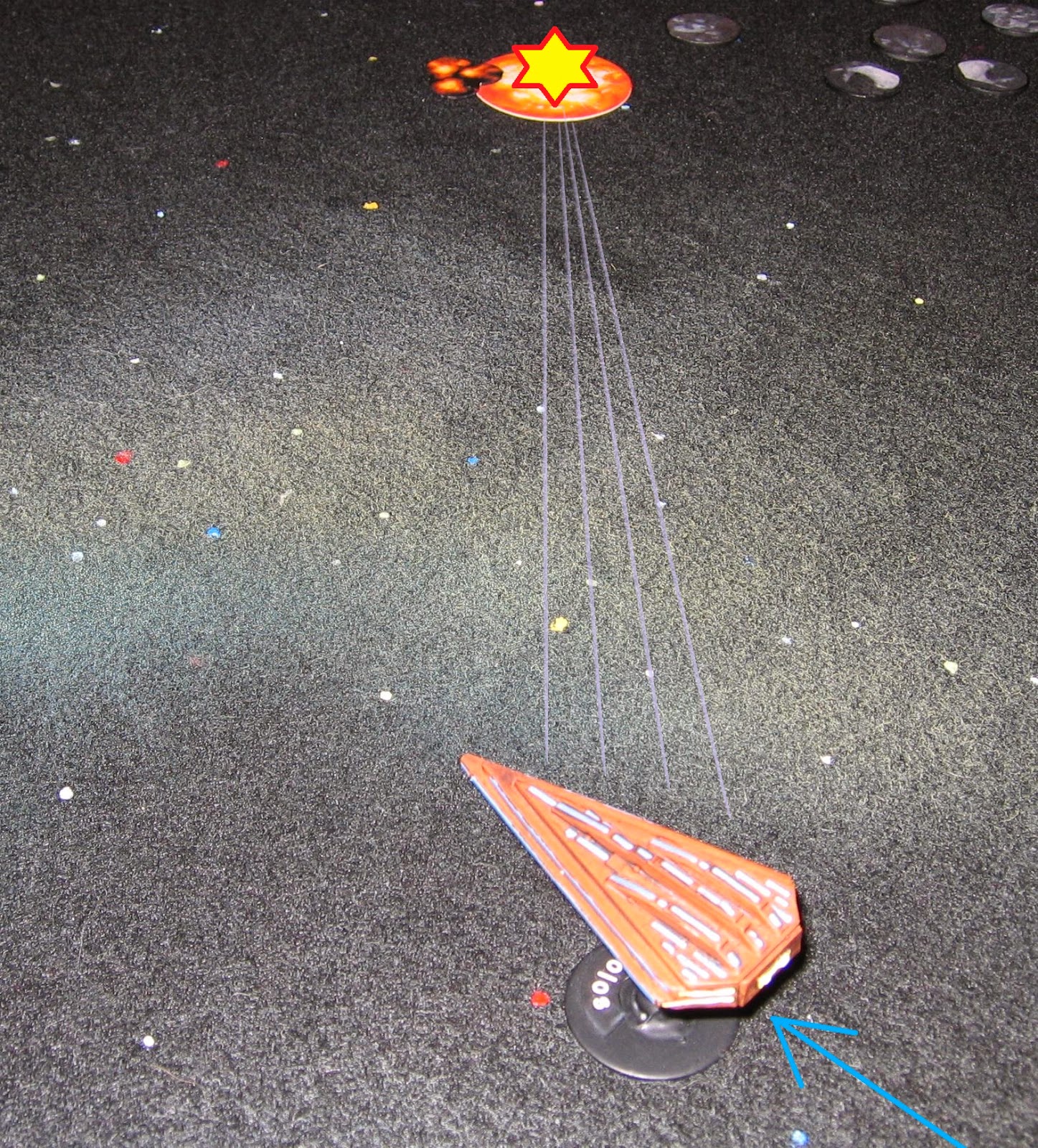 Even though the range was moderately long, the Pegasus didn't stand a chance against the Tholian behemoth.  The Tholos' broadside scored multiple hits, resulting in a runaway warp reactor which exploded immediately. 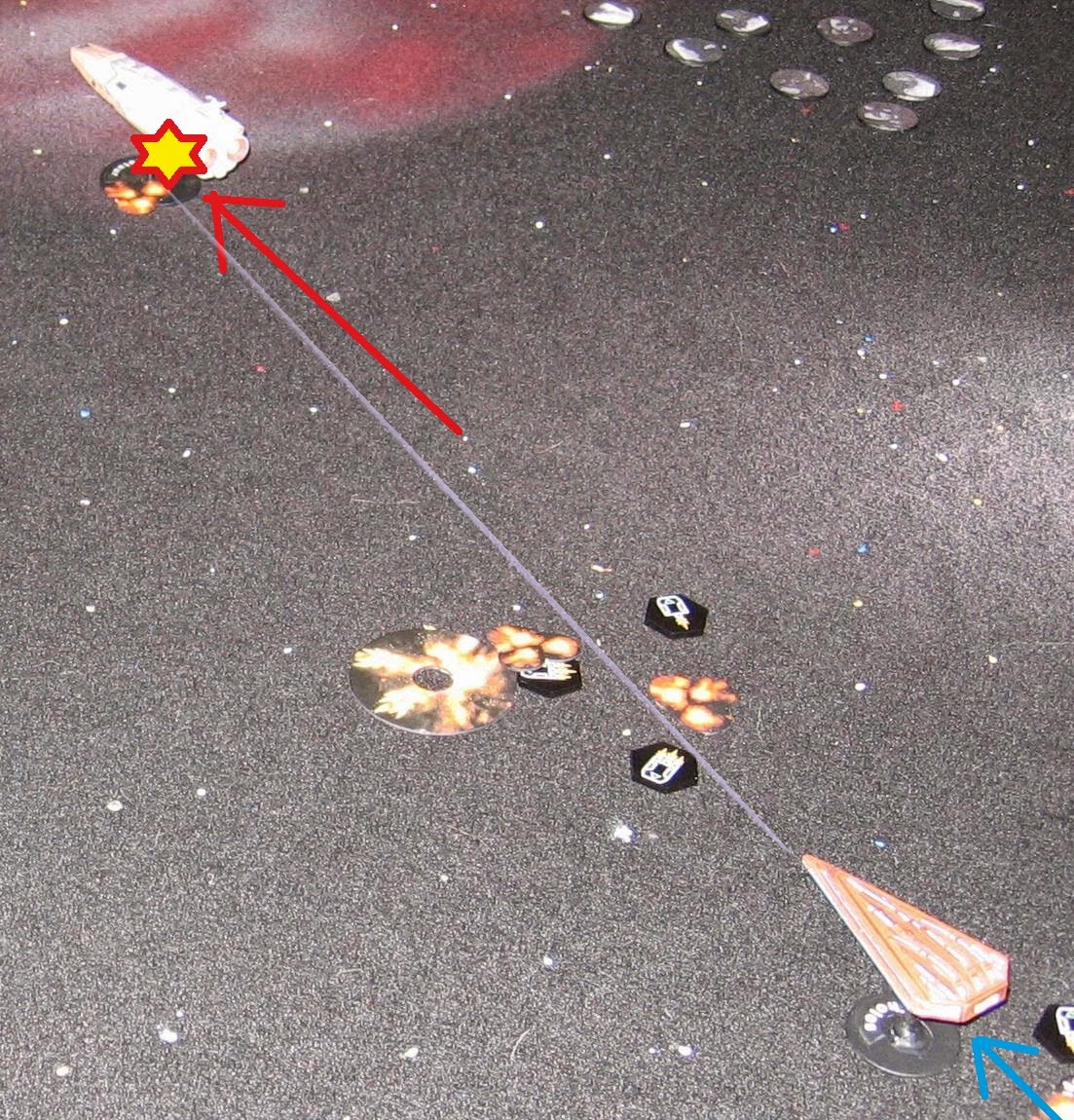 Judging that the Minotaur had too great a lead, the Tholian Inspector General fired some long range warning shots at it.  He was hoping to scare the freighter into surrendering, or perhaps damage its engines.  Instead, a single phaser hit caused a series of explosions (the Minotaur was carrying fuel and engine parts, I suppose) which ripped through the containment field controls for the reactor. 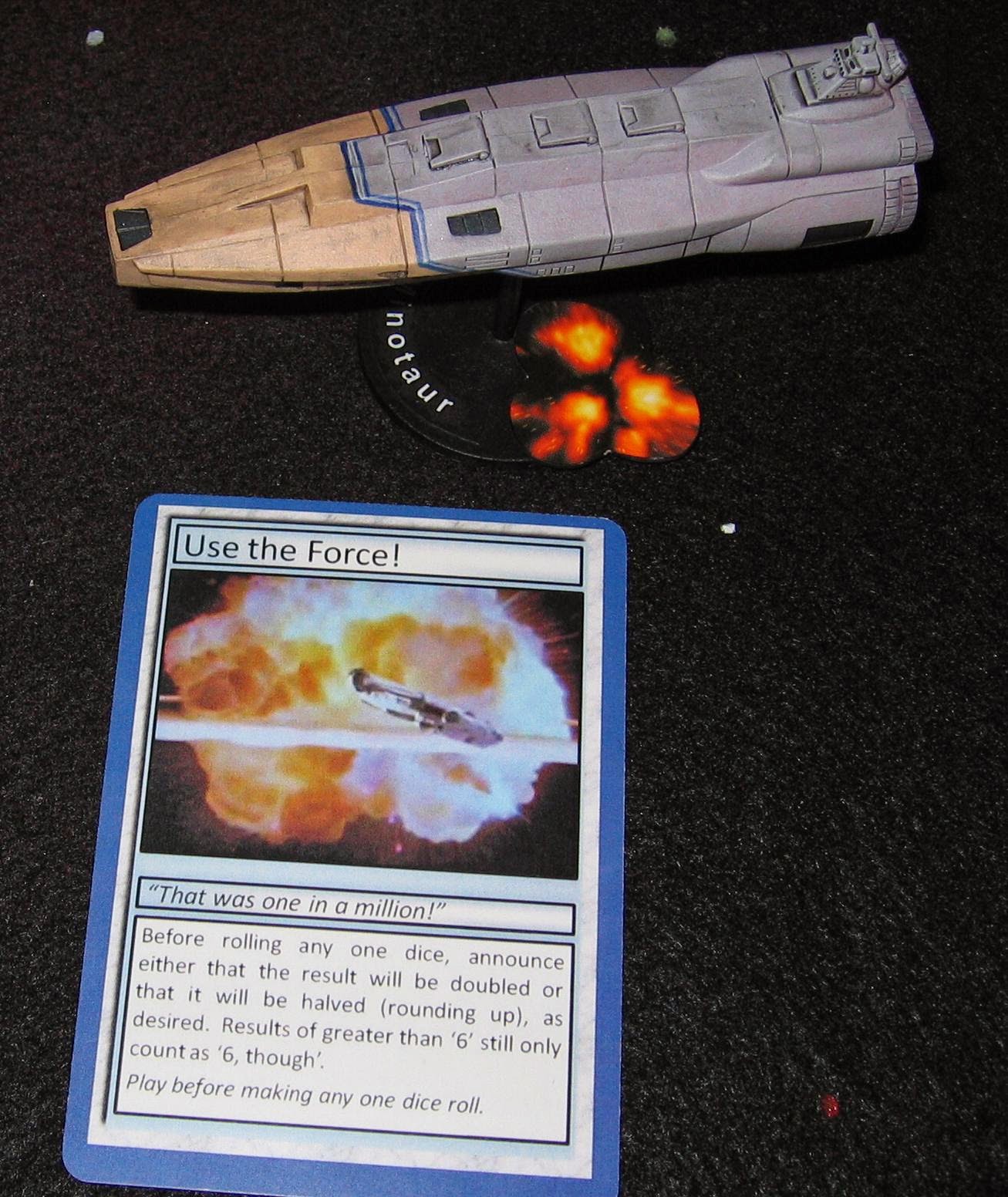 At this point, fate intervened.  The Minotaur's chief engineer had been killed in the fire, but one of the deckhands stepped forward.  "I know what to do!" he exclaimed.  "I've got a feeling about this".  Before anyone could dissuade him, he activated the controls to flood the engine compartment with triclozine.  [With 2 damage control parties, I needed to roll a 2 or under to shut down the critical warp core.  By playing the "Use The Force" card I could halve the result of the dice, thus improving my chances considerably.]

Sadly, the crewman had chosen the wrong option [I rolled a '5'!  Even though the card allowed me to halve this, it still rounded up to a '3' and so the warp core was still critical.  We then rolled to see if it went supercritical and promptly came up with the necessary 5 or 6].  The Minotaur blew up in a spectacular fireball, thus ending the game rather promptly.  Actually, the 2 Orion warships that were still on the table were departing too fast to be caught by the battleship anyway, so there was little point in playing on for 1 turn until they made their "official" departure.

OK, that really didn't go as I had expected at all!  I think that the Tholian player made a bad mistake when he deployed the heavy cruiser outside the web.  Apparently he was hoping to draw off the Orion forces by manoeuvring, but this just wasn't realistic.  Once the Lithos was crippled, the Tholian corvettes were easy meat for the Orion ships.  If I had been running the Tholians, I think I would have tried to board the Minotaur and capture her instead.

The Tholian reinforcements took a long time in coming.  Because of the earlier losses, this meant that the Orion squadron was already on its way home.  Indeed, if the Minotaur had had Thrust-2 instead of Thrust-1, they would probably have been quite out of reach by the time the Tholos arrived.  As it was, an unlucky long-range shot wiped out the prize!

Technically, this was a minor Tholian loss, since they destroyed the prize freighter.  In any case, 3 of the 4 Orion warships escaped with only superficial damage.  The Pegasus would probably have made it also, if her captain hadn't blundered his orders.  The Tholians lost a heavy cruiser and a corvette destroyed and another corvette reduced to an abandoned hulk, so the Tholians would have lost on material as well.

I don't think there was anything much wrong with the scenario, but I do think that playing the Tholians will take a bit of thought!