It's been about 8 months since I last posted any pictures of my workbench (here) and I thought it would be worth while to see how that compares with today's reality.  I'm expecting that it's much less tidy today; I'm having real problems in trying to keep on top of the mess and my ever-expanding range of interests.

As you can see from the picture above, I can barely sit at my desk, let alone do any work.  This is partly why I've not been doing much recently; I just don't feel much sense of satisfaction at making models in such an untidy environment. 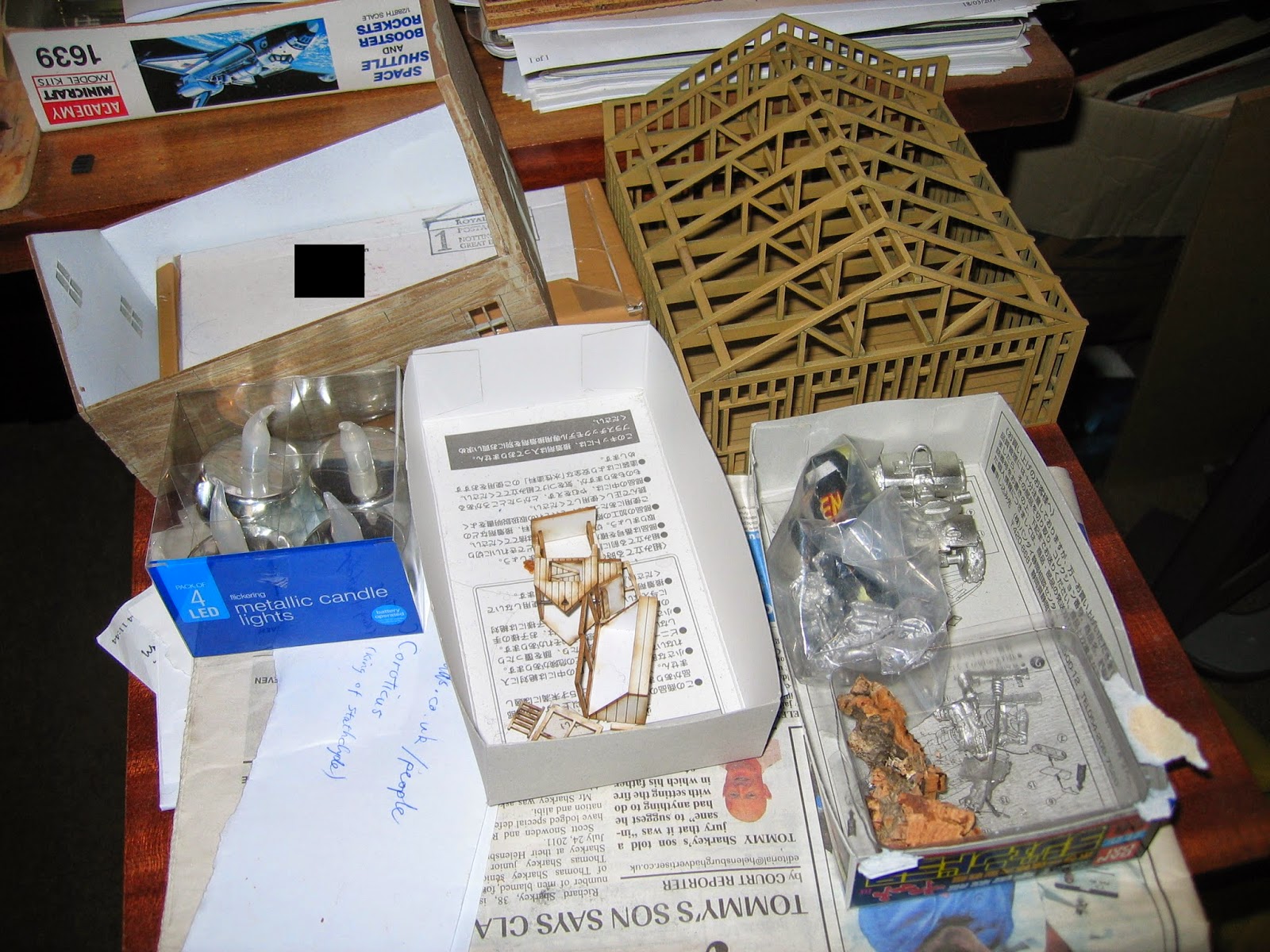 To the right of the desk (on the pull-out leaf) are a couple of part-built Old West buildings - an undertakers and a construction site.  In front of them are smaller outhouses (a garden cold frame and a hen house); the box on the right has a 28mm quad bike. 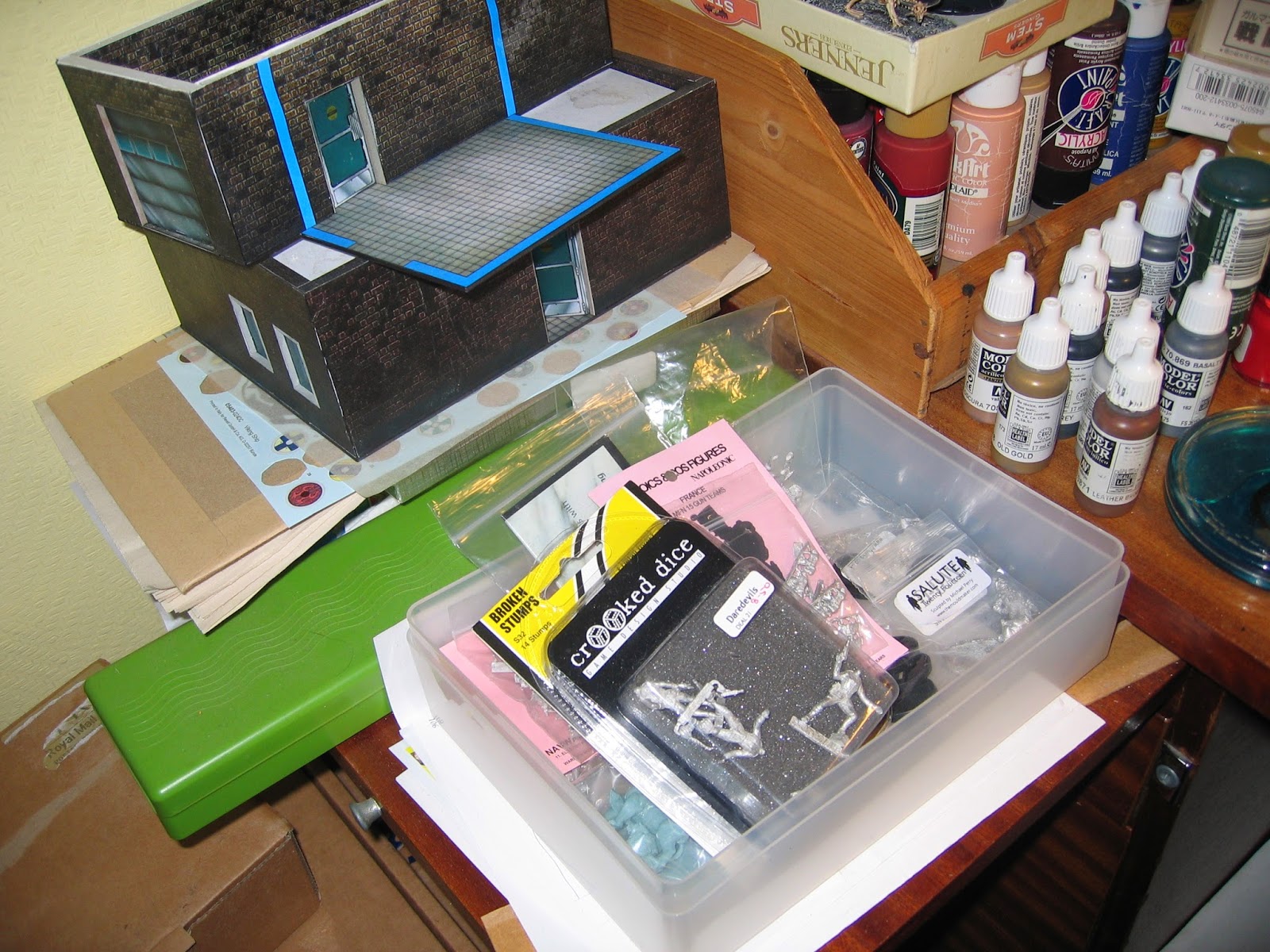 On the left hand leaf is a tray of models that aren't yet opened and started.  I'm being very conscientious about this: they mustn't be built until space has been made on the table by completing something else first.  The tray contains some barbarian heroes (well, heroines, I suppose) from Hasslefree as well as the "Daredevil sisters" (aka Angels from Captain Scarlet).  I wish to get some helmeted heads for the latter before assembly.

At the back are some ruined buildings from the Stoelzel's Structures car sales yard.  They are ruined in the sense that my builds of the models are warped and twisted, not that they portray derelict buildings.  I haven't yet decided what to do with these, so they stay there as reminders to go back to that project some time... 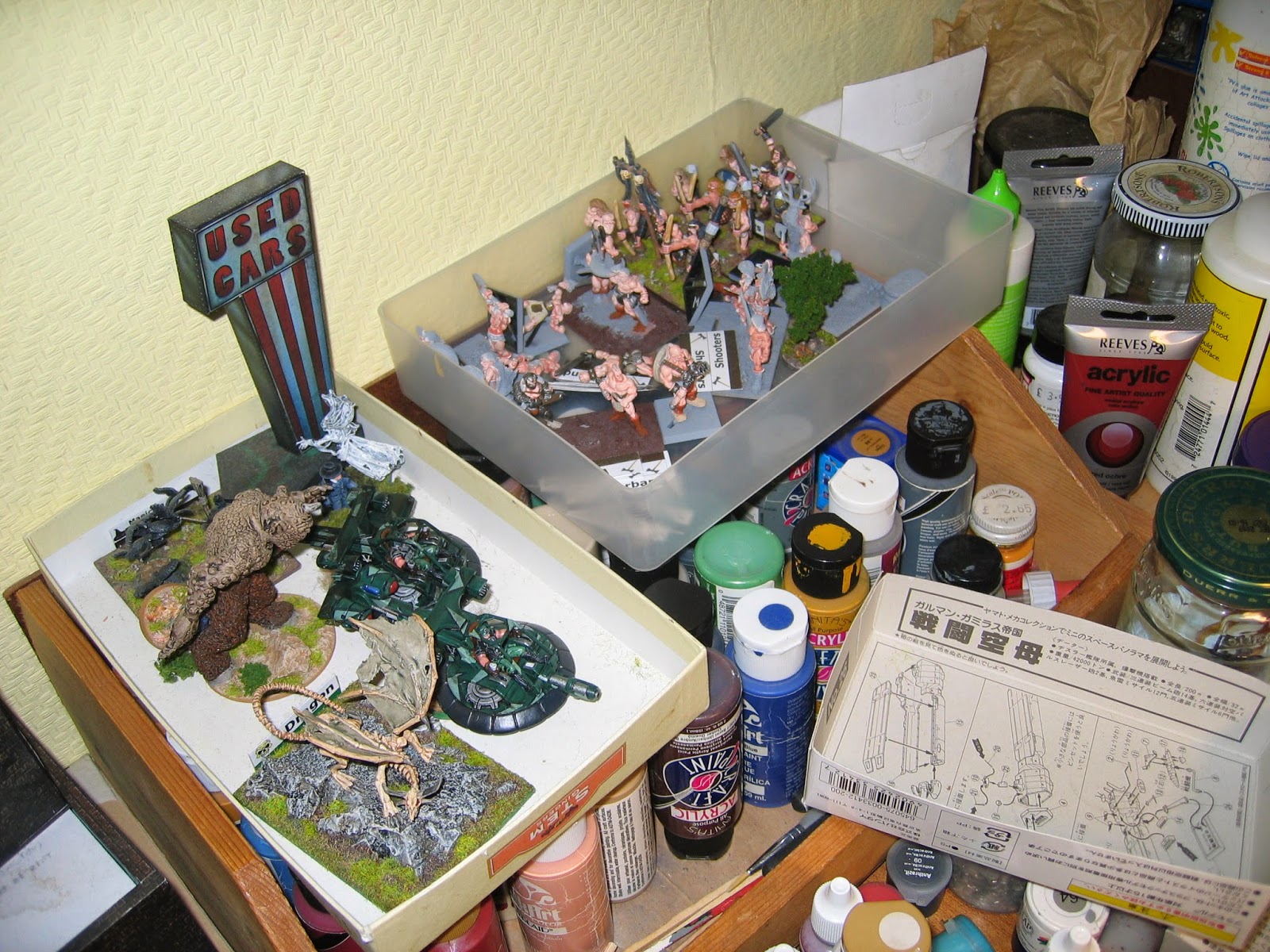 On the desk itself, the extreme left has my collection of paints.  On top of these (due to lack of space, even though it is very awkward to use the paints) are a couple more trays.  The front one holds completed models that haven't yet been put into storage.  You may well recognise some of my recent works such as the undead dragon and the 2 Viridian skimmers.

Behind the completed models, another tray holds elements of my partly-finished Barbarian army for Hordes of the Things.  I think that 3 elements are painted and varnished; all the rest are only partly painted. 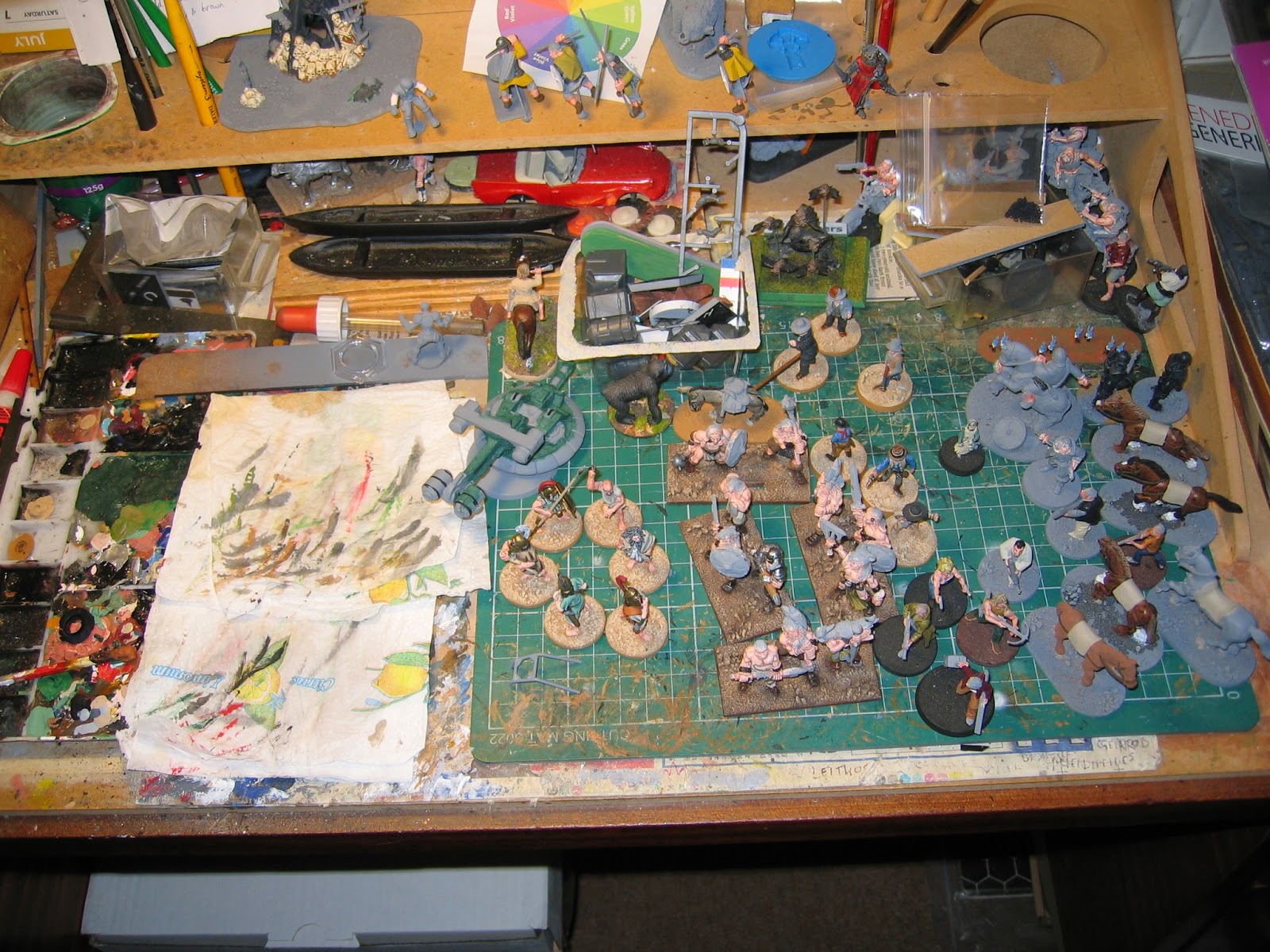 The working part of the bench, in the centre of the desk, is very cluttered at the moment.  Some items come onto this space and move off it again very quickly, but many of the models have been here for months or even years! 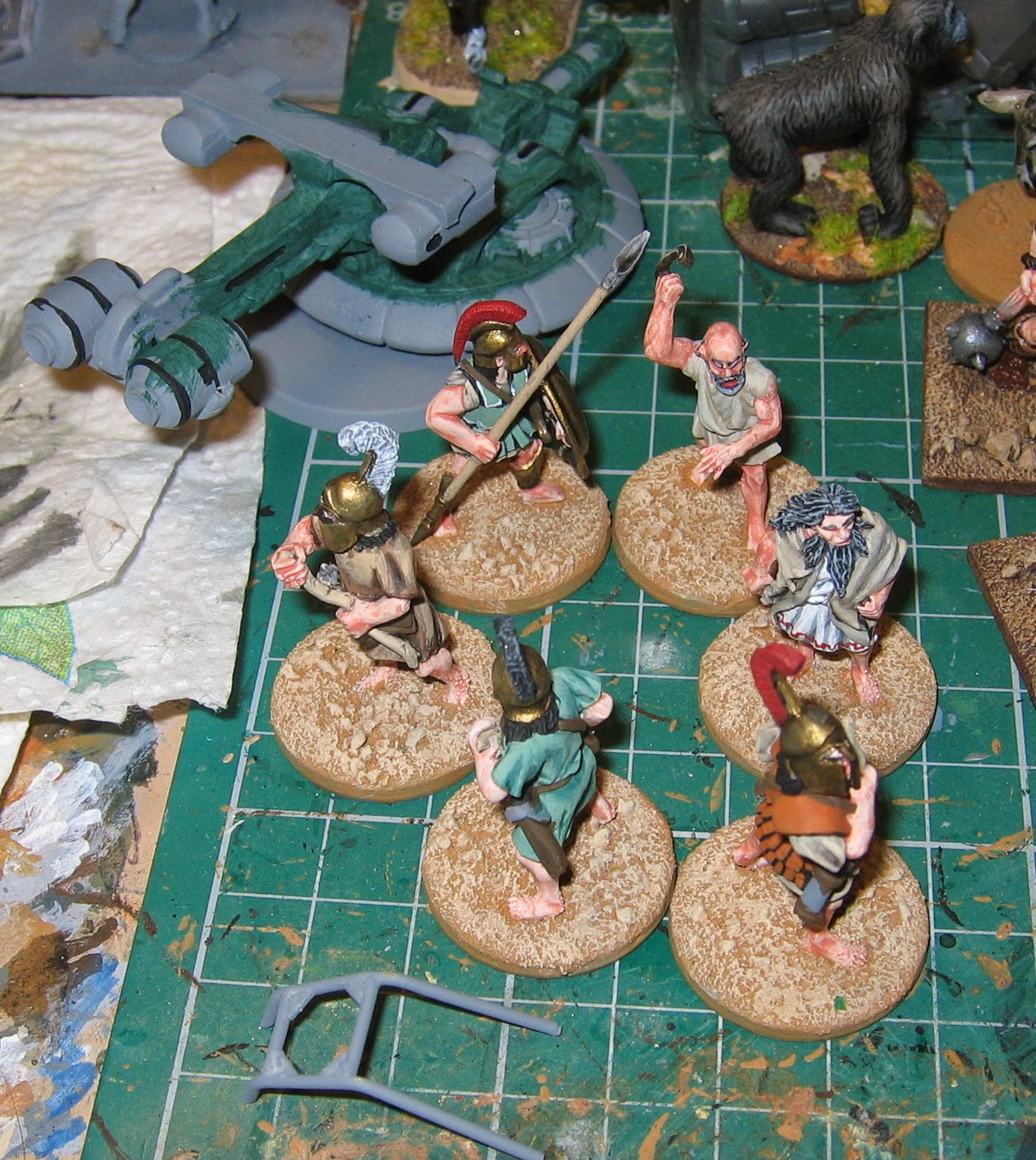 In a little more detail, the bench contains a few more 28mm Ancient Greeks.  These are nearly finished.  They will join (or maybe oppose?) Jason and the Argonauts when I finally get this project ready for the gaming table.  You can see here 3 archers, 1 new hoplite, a slinger and an old man.

Also note that my 3rd Viridian skimmer is just behind the Greeks. 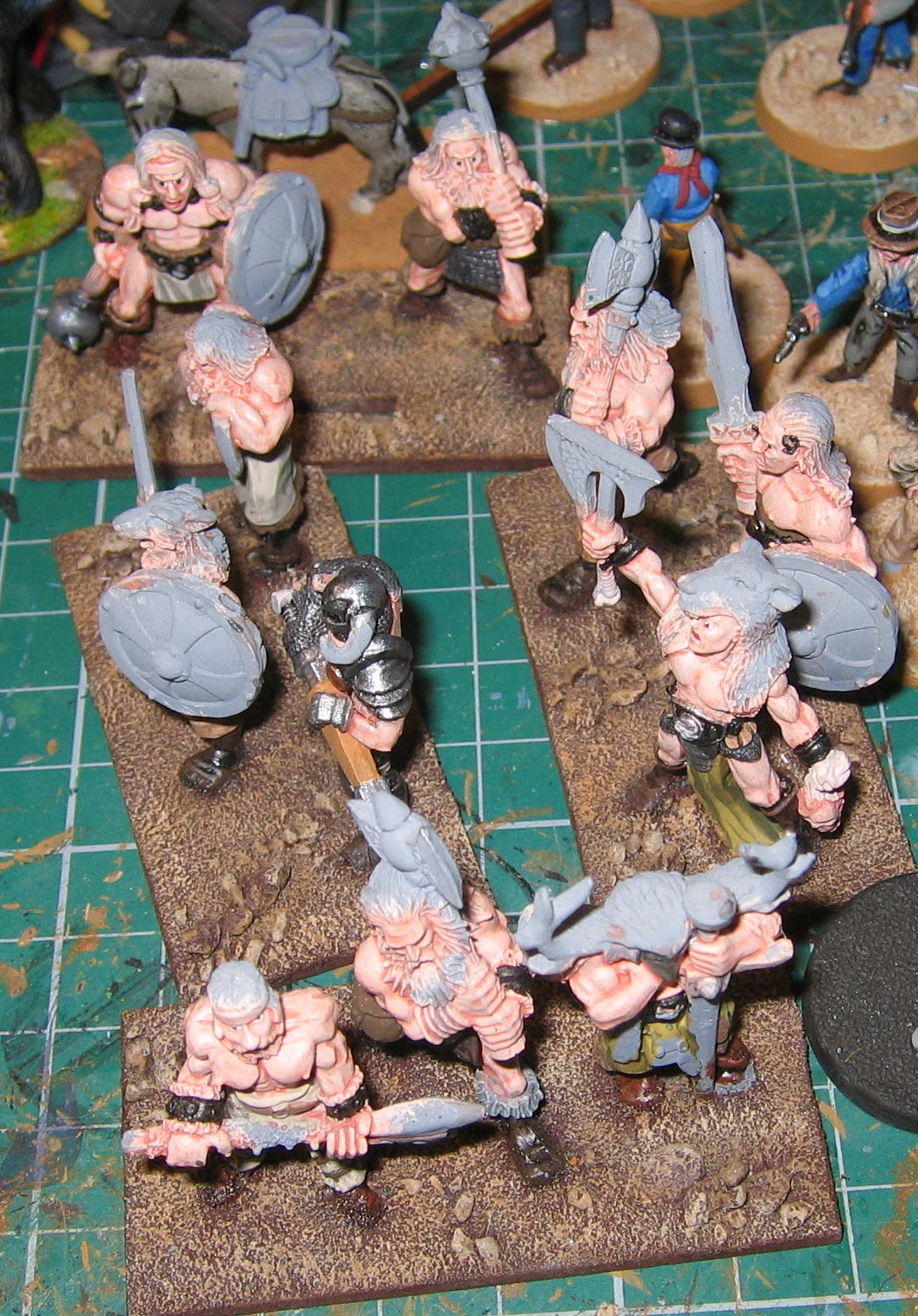 Next on the bench are 4 bases of Barbarians for Hordes of the Things.  Although I'm itching to build some of the heroes for this army, I've set myself the goal of completing at least some of the rank-and-file first.  It's not going very well; these figures haven't progressed much for months. 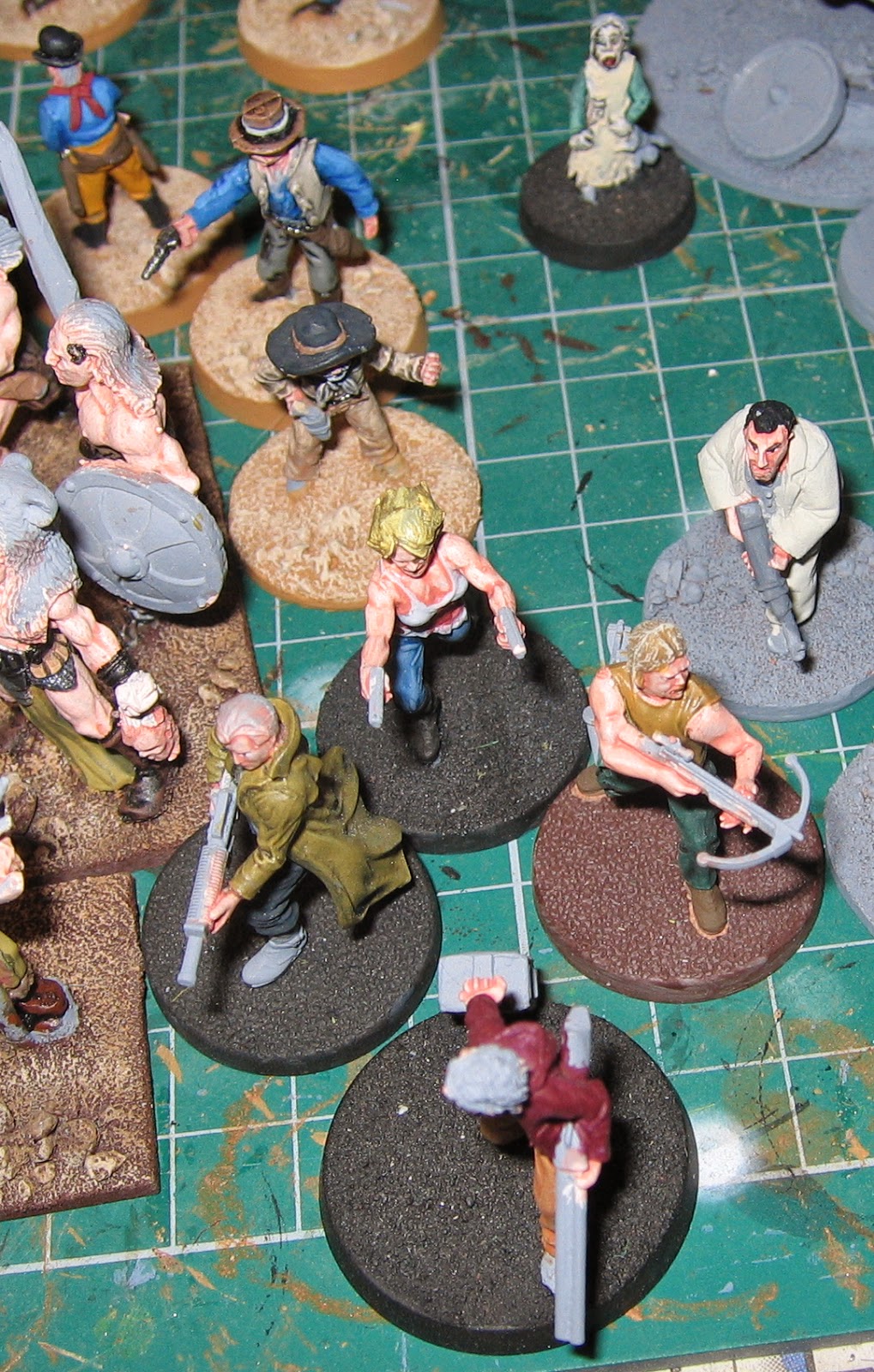 Moving further to the left, I have a few modern survivors, with some cowboys behind them (as well as a lone zombie child). 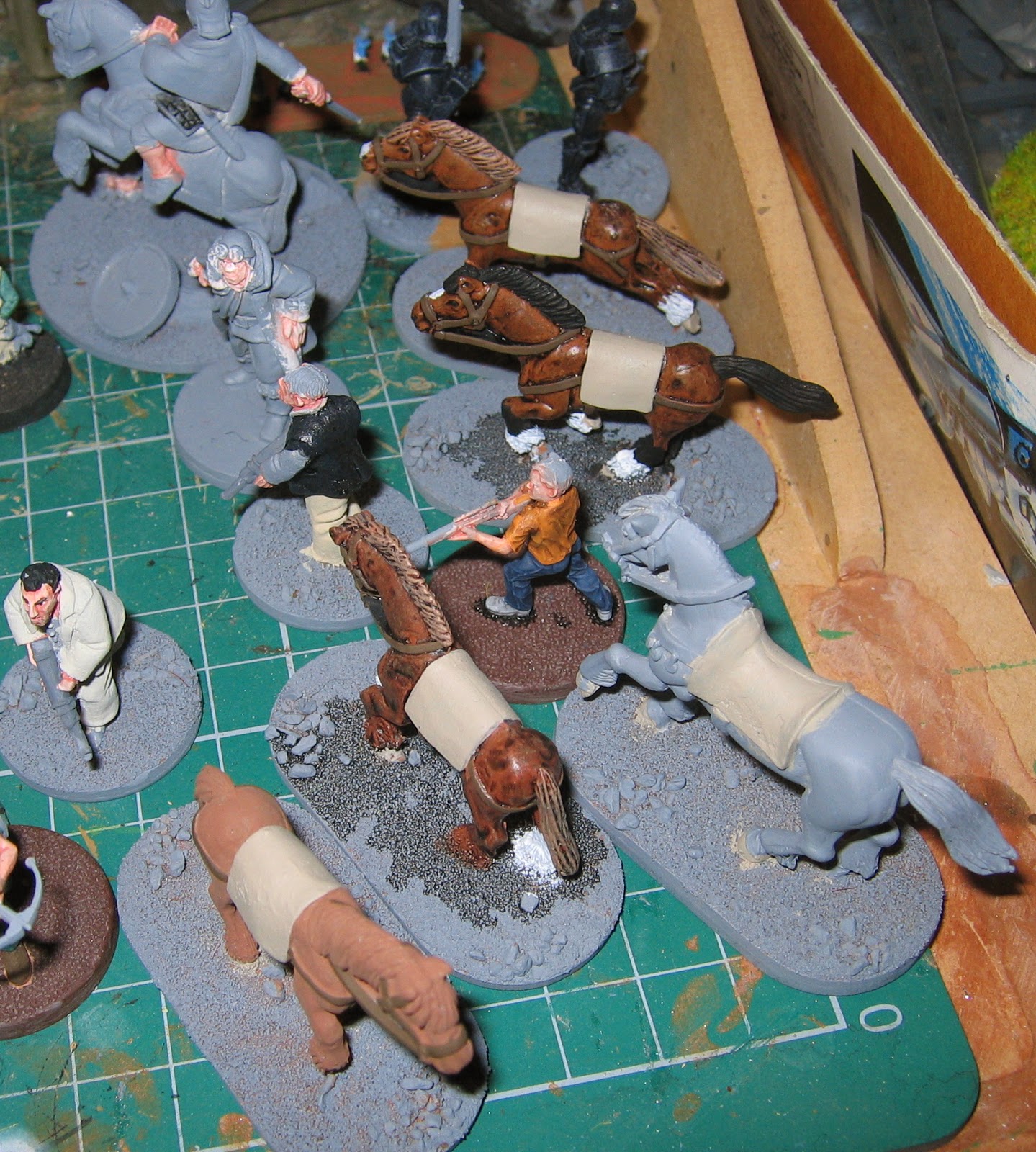 At the right hand end of the workspace are the horses for the first figures in my SAGA Strathclyde army.  This faction are notorious for the high proportion of cavalry in their warbands, though it is really the riders that are holding me back from completing the models rather than the mounts.  Anyway, if/when I complete the few that are here, I've got another 20 or so to build!

Mixed in with them are a few pulp villains and heroes. 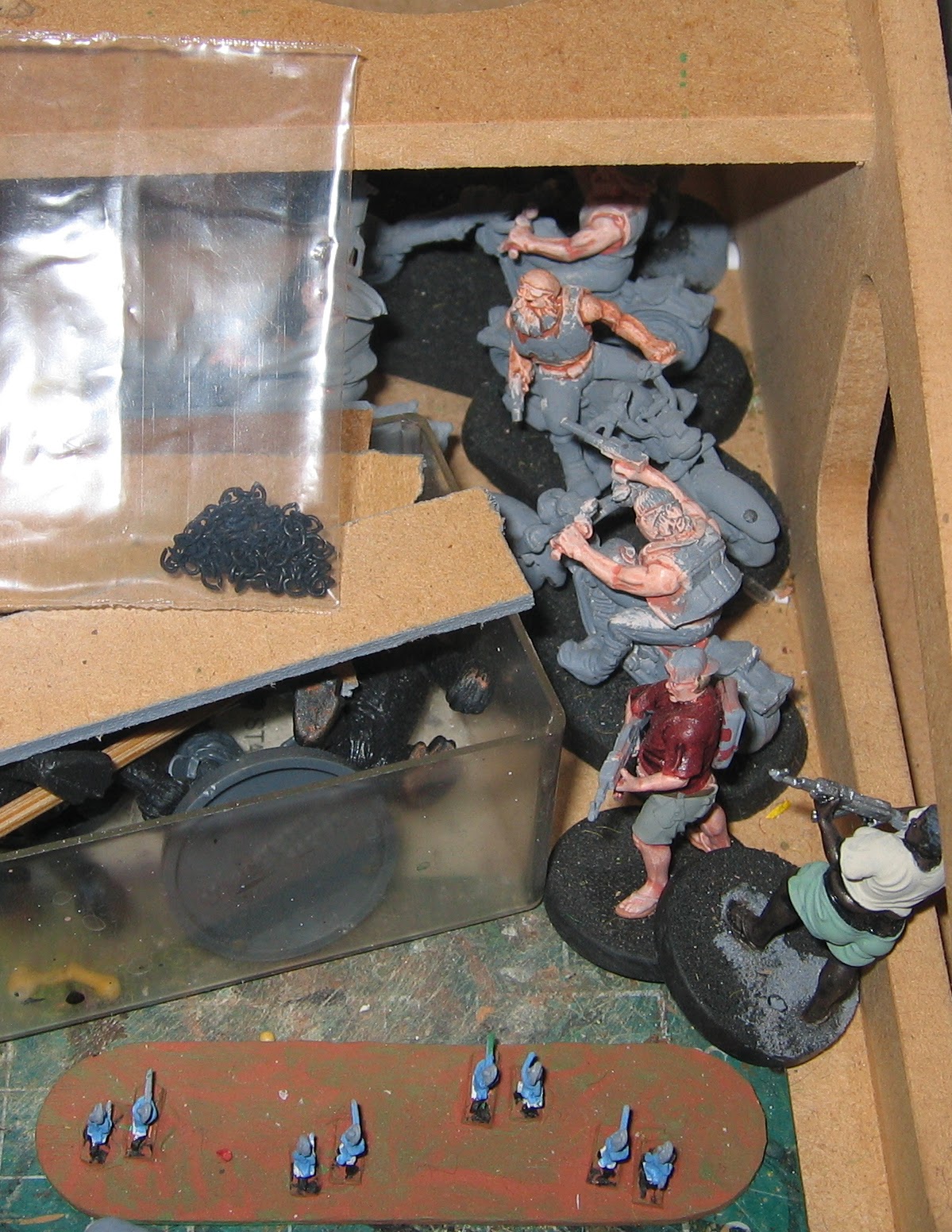 At the back of the workstation, partly hidden under the shelf, are my 28mm bikers.  They've probably been there longer than pretty much any other model on the bench. 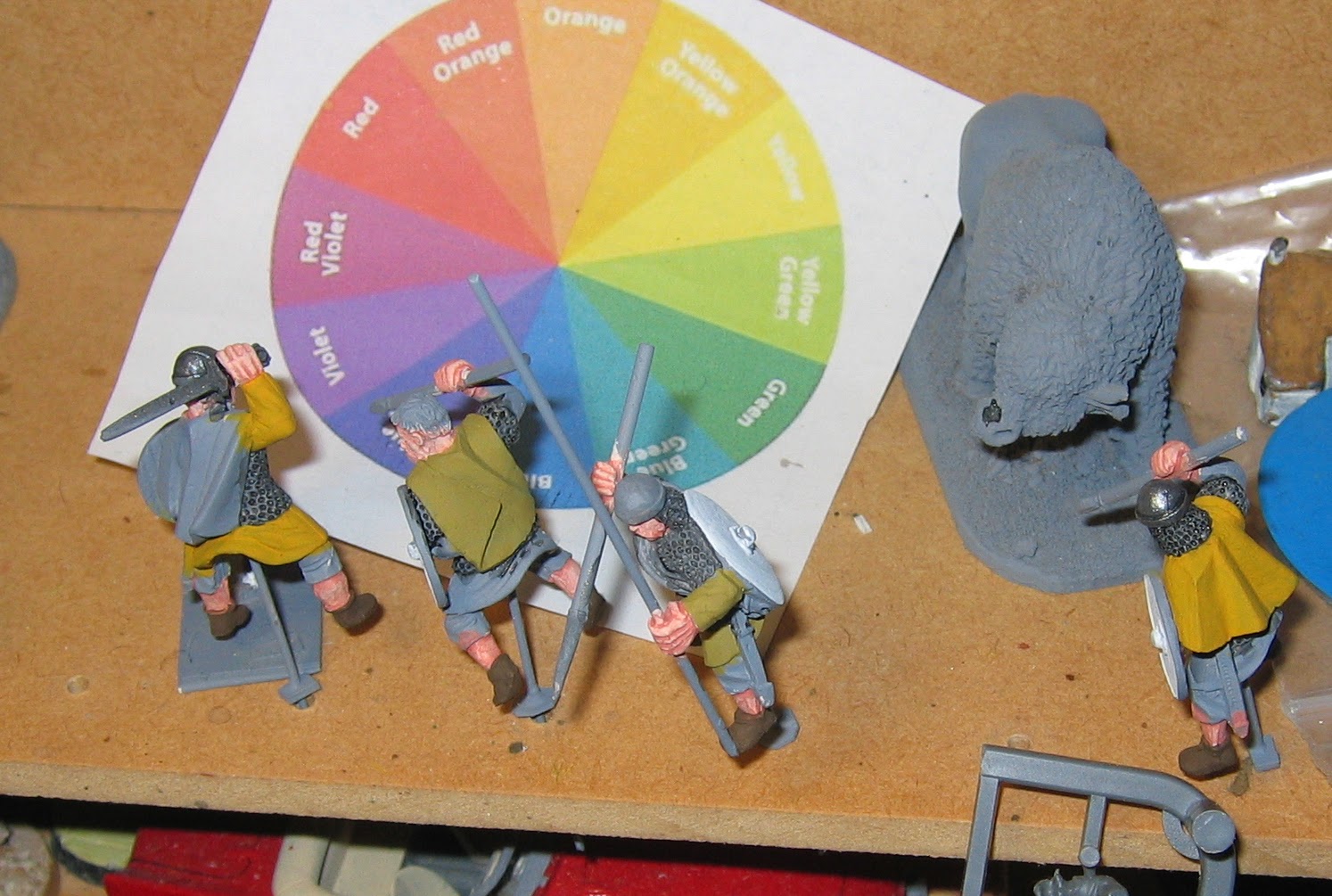 Here are the 4 Strathclyde riders.  As you can see, I've not managed to paint much of them yet, despite having these models since Claymore 2014 (i.e. August). 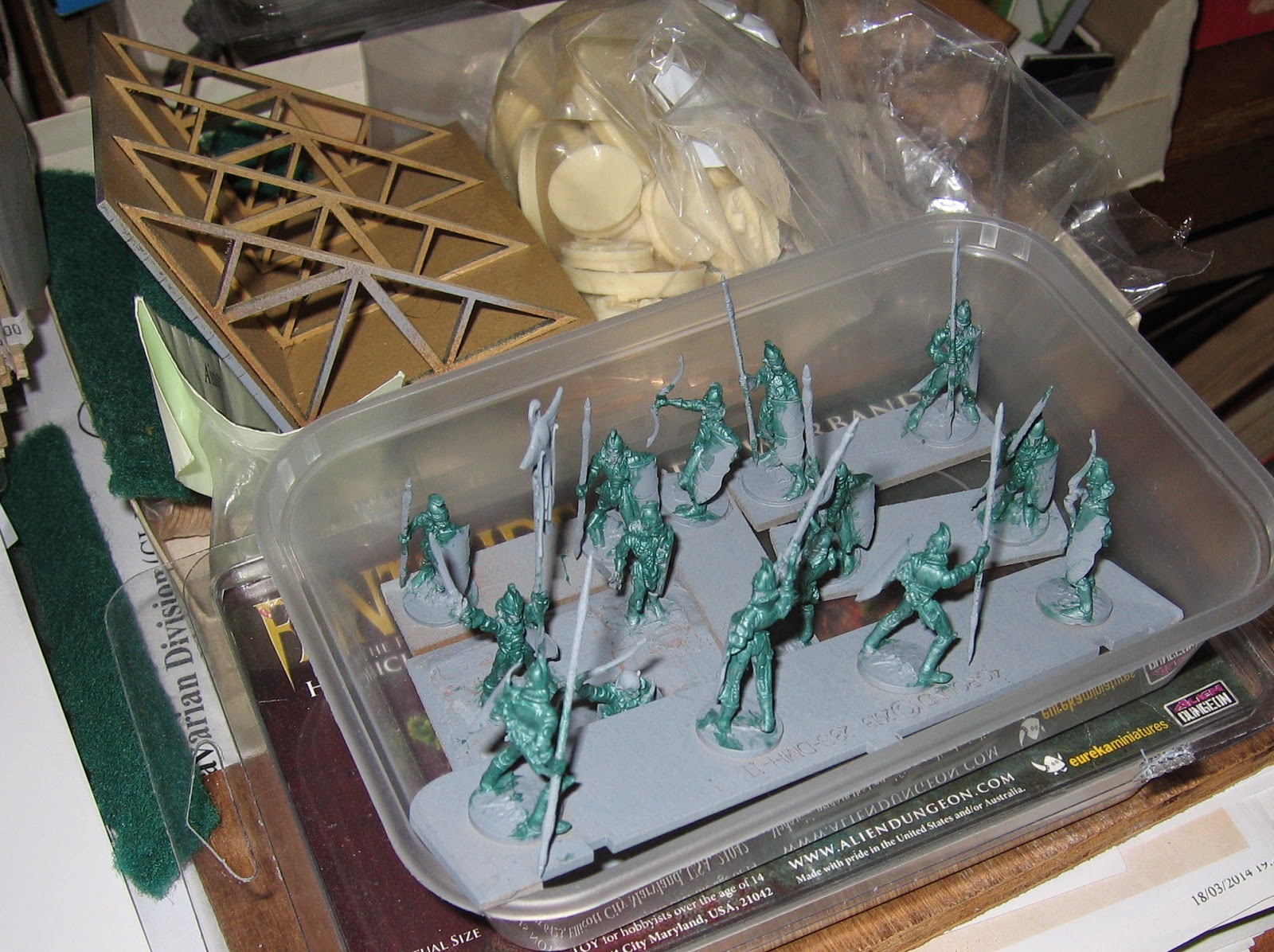 To the other side of the workstation, there are some new additions.  The guys in metallic green armour are my middle son's elves.  He hasn't done anything on these for many weeks and I suspect strongly that I'll need to nag him horribly to get them finished and moved out of my space.

It's nearly Christmas, when I know for certain that I will receive even more models.  If I cannot find a better way of managing this area (and if I cannot find more storage space!) then I'm in danger of drowning in figures.  Metaphorically, of course (I hope)!

I'm pretty much at my wits end here; I've no desire to cut down on the number of my projects, but equally I don't see how I can manage all the current ones either.  What to do?
Posted by Colgar6 at 20:20

Email ThisBlogThis!Share to TwitterShare to FacebookShare to Pinterest
Labels: 2014, Workbench