ATZ Short Stories: Our Boys at the Front, part 2 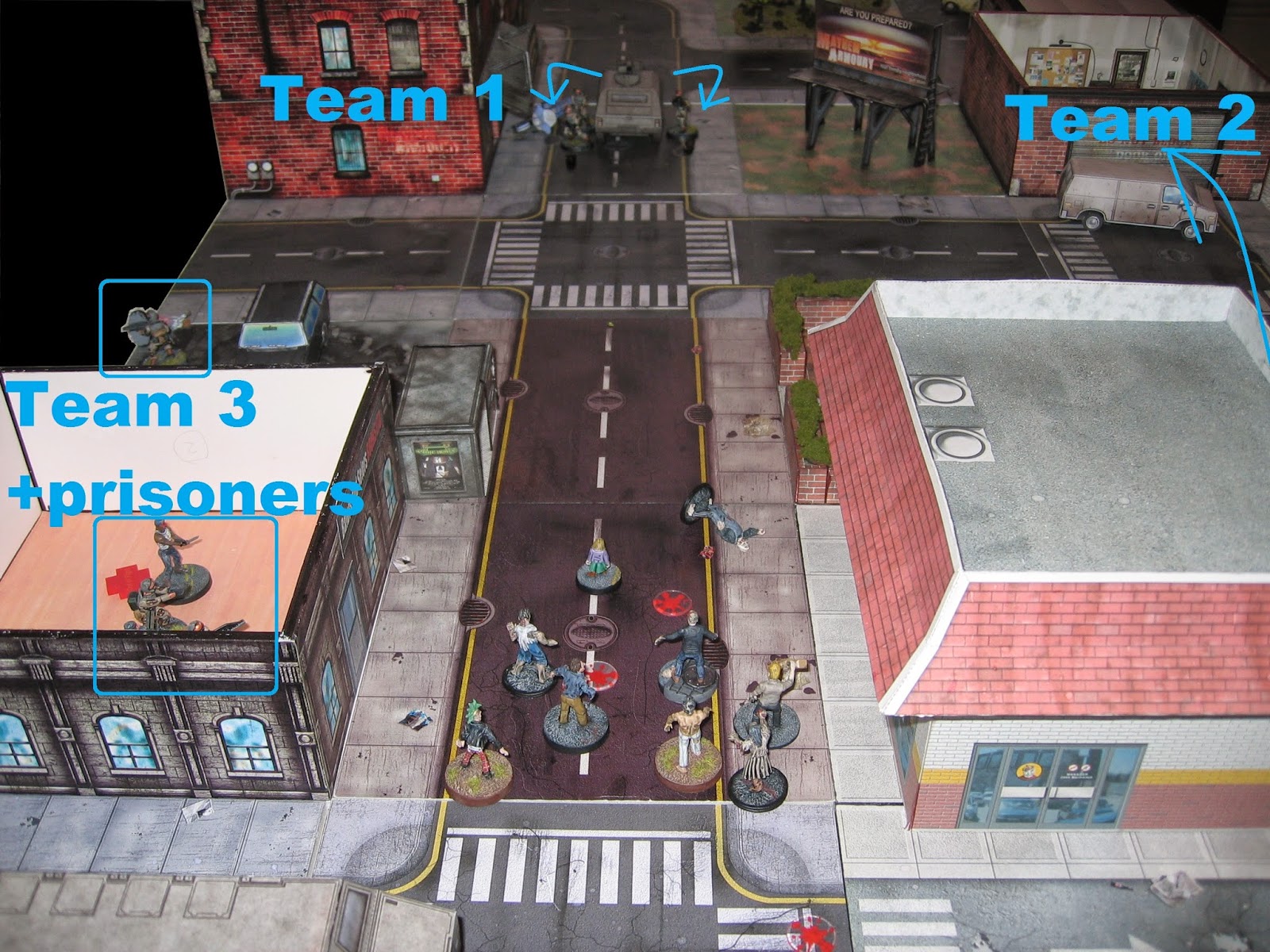 As the initial gunfire died down, the situation was this: 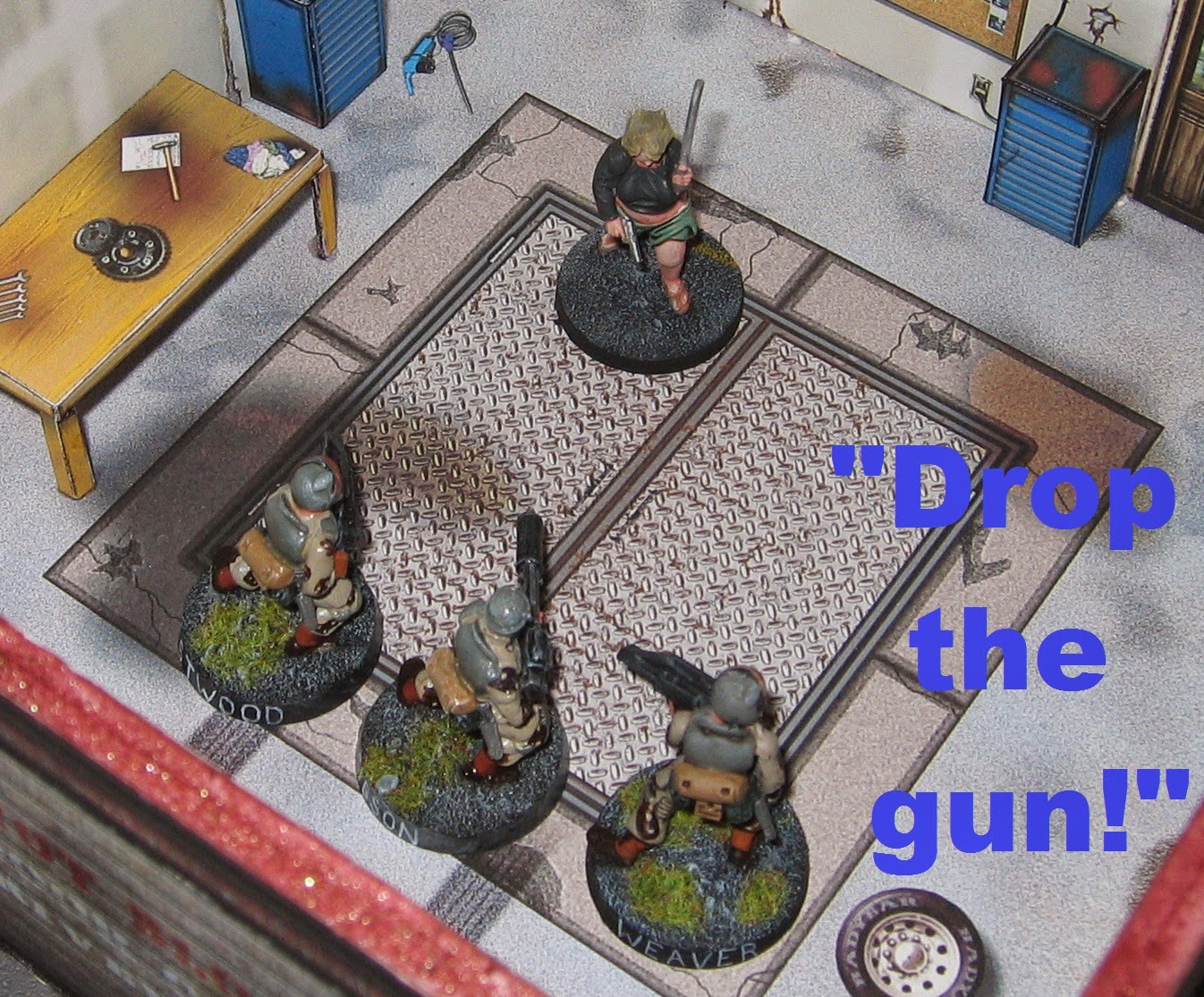 The garage wasn't clear: team 2 found a single hostile inside.  However, they had no trouble at all in convincing Laura to surrender; she was promptly disarmed, arrested and handcuffed. 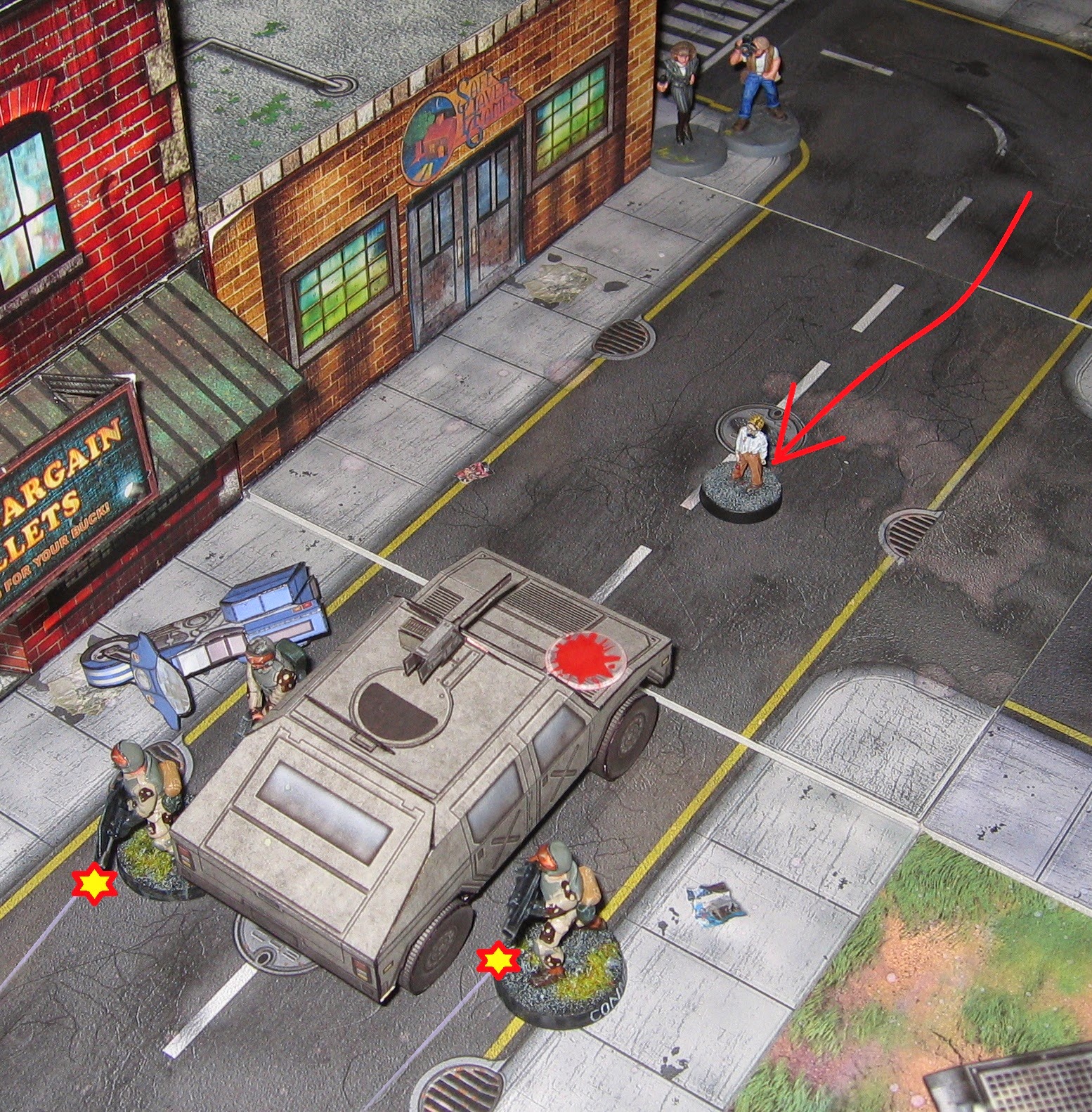 Back at the Hummer, Connery and Van Damme were concentrating on shooting at the zombies further down the road, though this wasn't having the effect that they had hoped.  Brosnan's pistol was out of range, so he stood at the back. 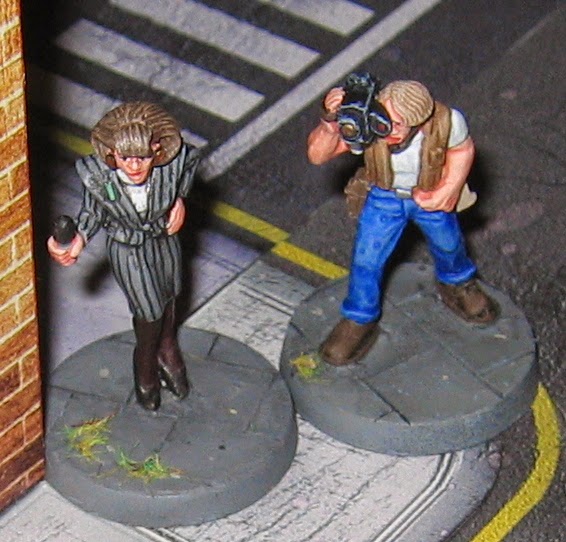 All 3 of the soldiers failed initially to notice a small boy zombie approaching them from behind.  However, they were no longer the only people in the area.  The last remaining PEF was resolved as 2 civilians, who turned out to be a news crew (reporter Lynne Gosnett and cameraman Pete Maclennan).  From now on, all that happened would be broadcast on the evening news bulletin! 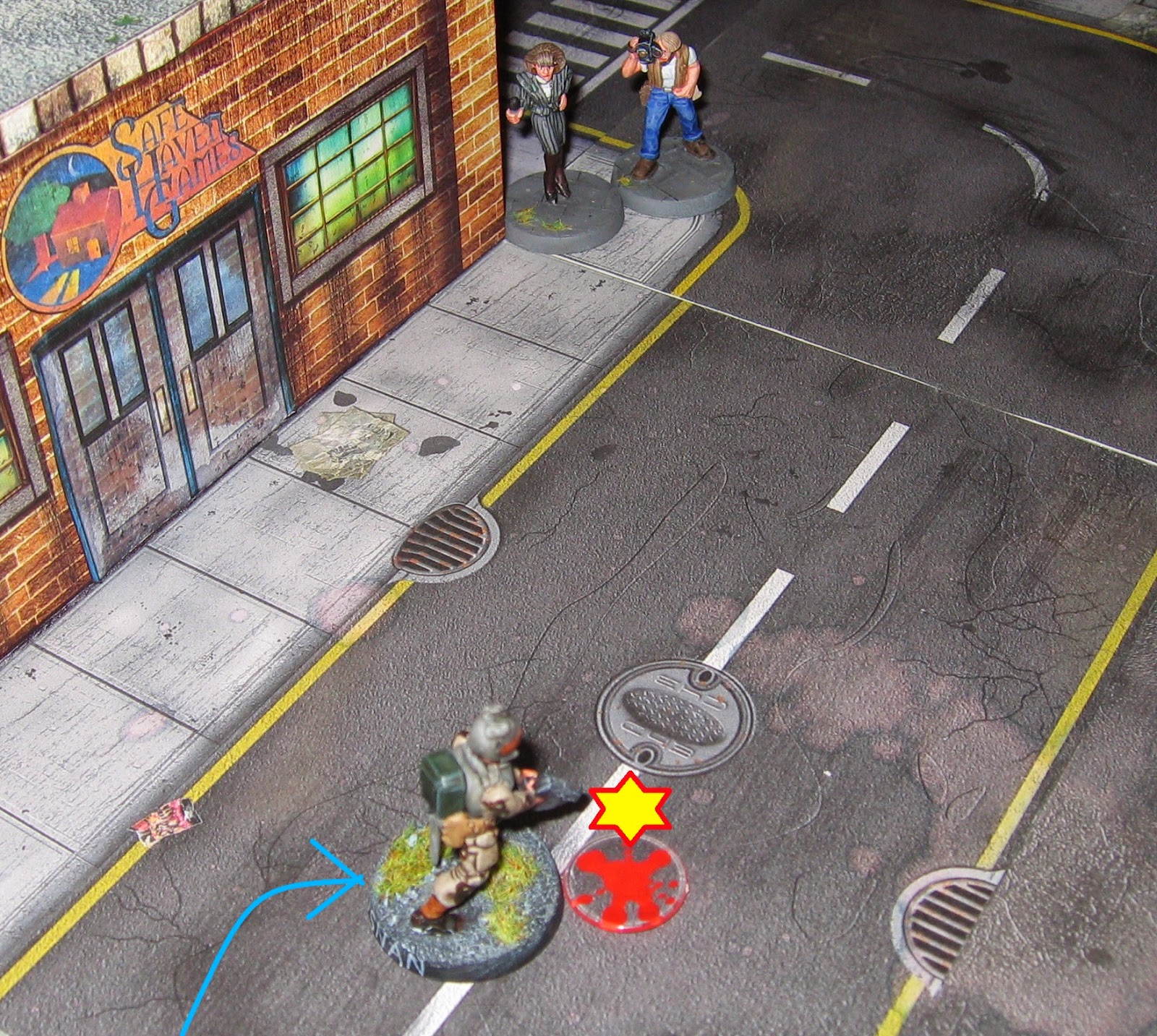 The very first thing that the camera crew recorded was a small boy zombie approaching the soldiers from behind.  Lieutenant Brosnan must have heard voices or something, for he looked around and sized up the situation quickly.  He drew his combat knife, ran at the child zombie and caved in its skull with several mighty blows.  As the gore sprayed around, Lynne's stomach heaved and her news commentary faltered. 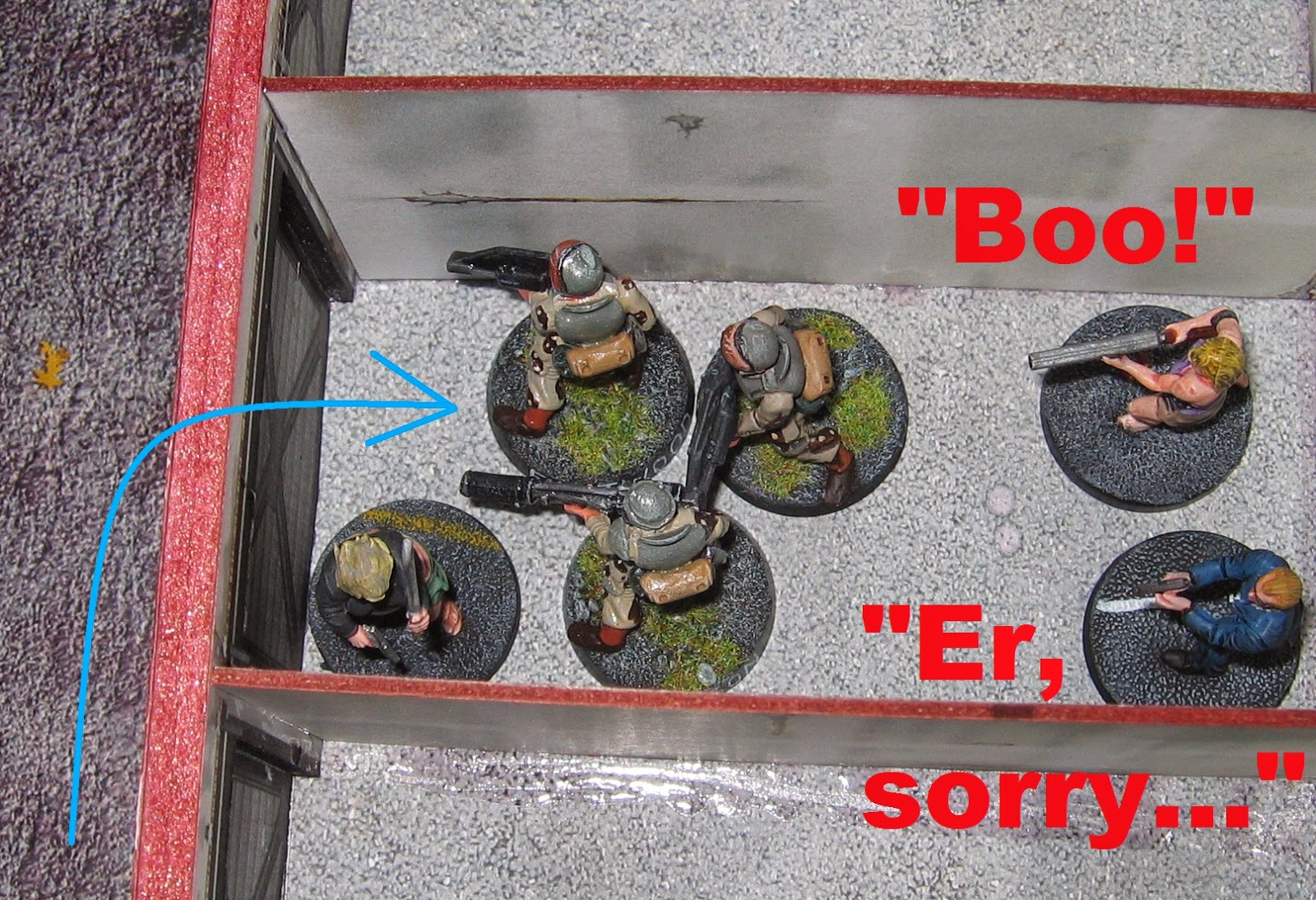 Team 2 (and the prisoner they had arrested) were still making their way through the maze of buildings to the north-east.  For a moment it looked as if their perfect record would be spoilt when they were ambushed by a pair of gunmen.

However, the "Drop Your Weapons" test went very badly for the ambushers; they came out holding their hands high before the soldiers had even realised that the gangers were there.  They lost their nerve, I guess.  Team 2 now had 3 prisoners and was running short of plasticuffs... 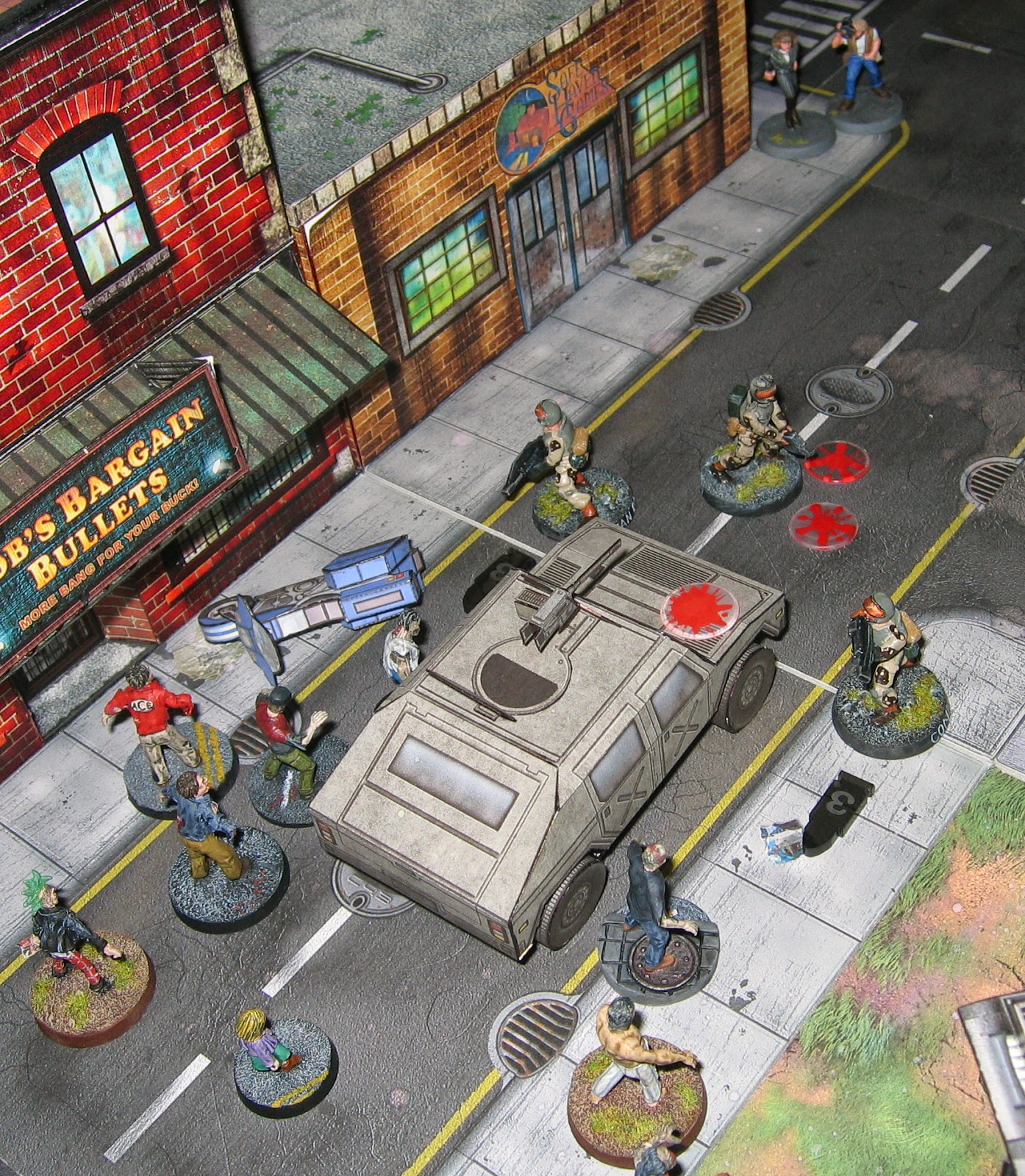 The "single, aimed shot" policy wasn't working for team 1.  In desperation, they resorted to burst fire in an attempt to thin out the horde of shamblers that was approaching them. 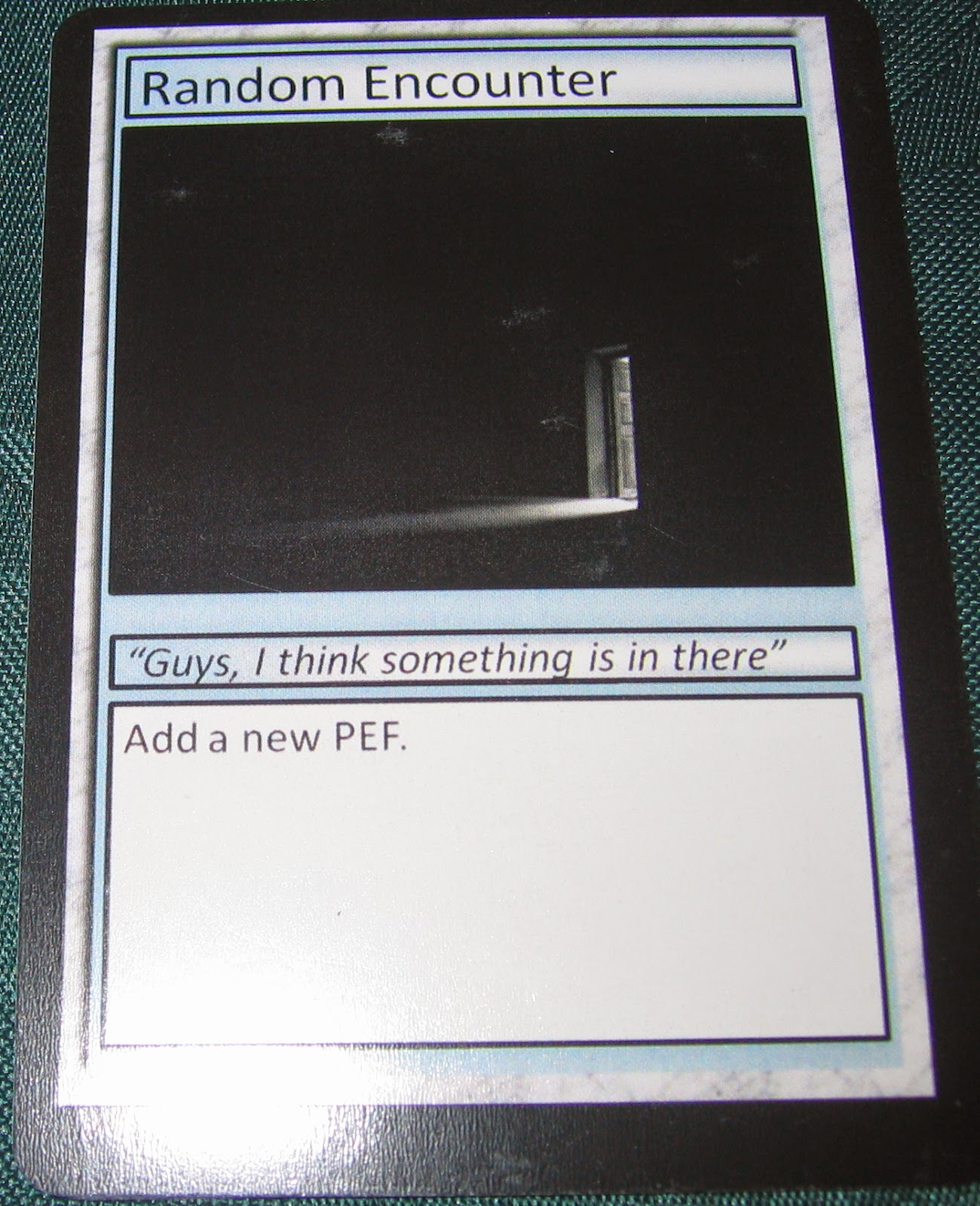 We then drew another random event.  Even though all the original PEFs on the board had been removed, we added a new PEF to the board.  Random placement put it in the crossroads in the centre of the board, which happened at that moment to be unobserved by any of the player characters. 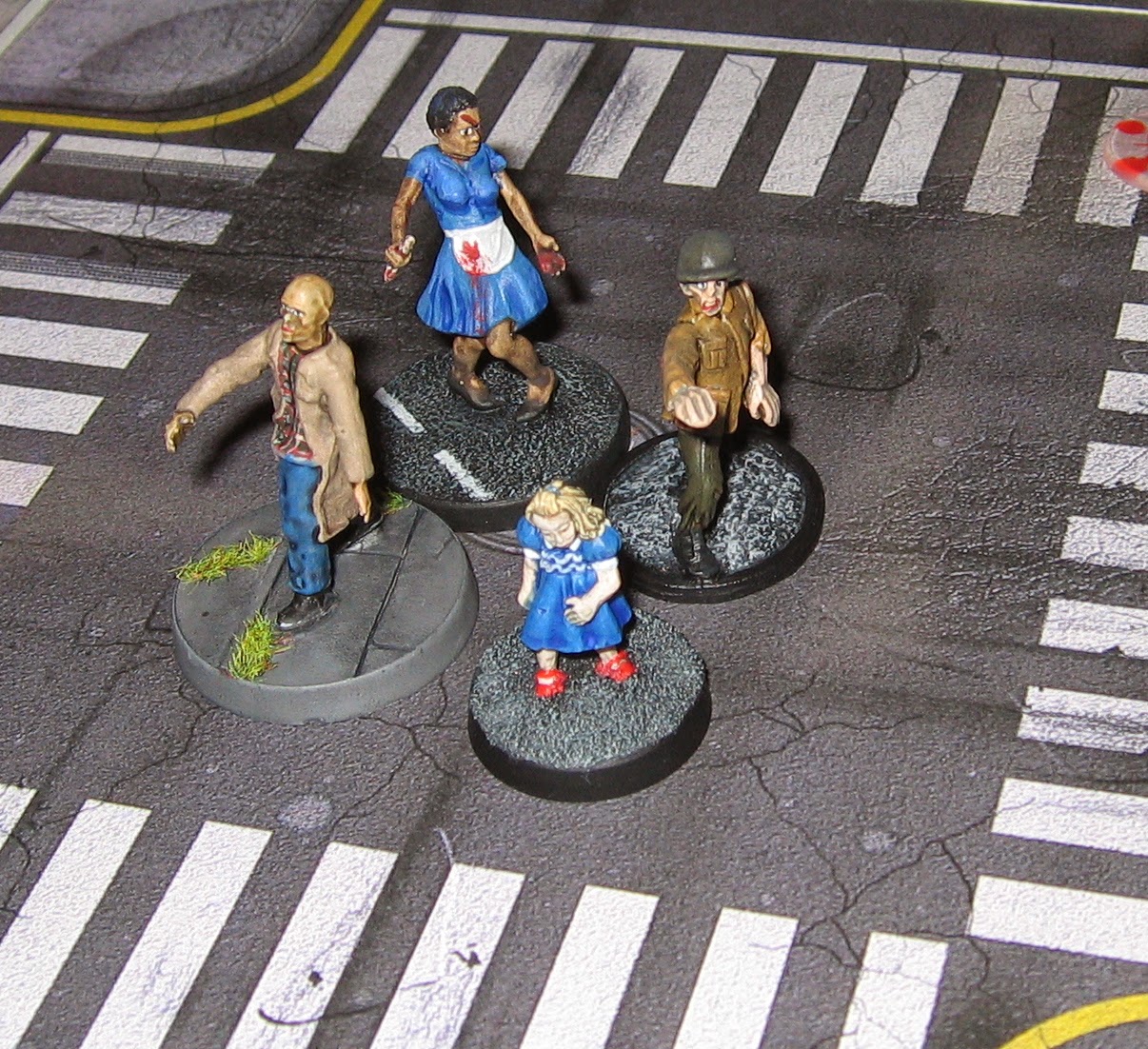 Team 3 (minus Dalton, who was lost and fighting off one zombie after another in the wasteland) had finally crept out of the bookstore and had taken their 2 prisoners back to the truck.  They chained the gangers to the inside and then returned to the main street, just in time to see the new PEF.  It was immediately resolved as another 4 zombies - as if anyone needed that! 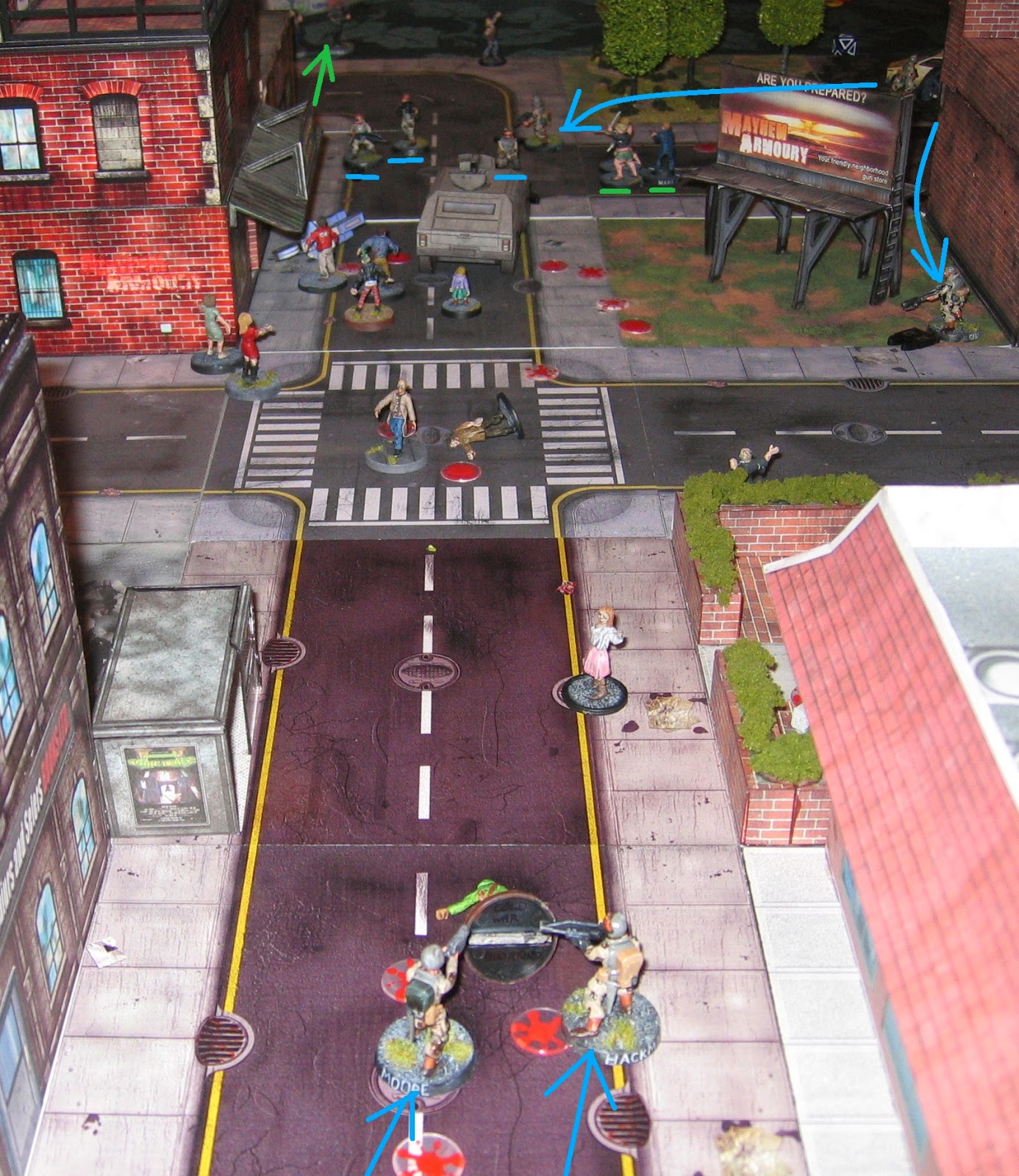 By now, there were zombies everywhere!  The news team skedaddled, barely escaping from a zombie that got to within 1" behind them before they could activate.  I suppose they were too intent on filming the scene ahead of them (or, in Lynne's case, too busy heaving her guts up!).

Team 2 ran out of the now-cleared garages to reinforce the command team near the Humvee.  In doing this, they didn't pay much attention to their prisoners, who wandered aimlessly but unscathed through the whole mess.

The remnants of team 3 started to move up the street, using their combat knives to fight off the light opposition near them. 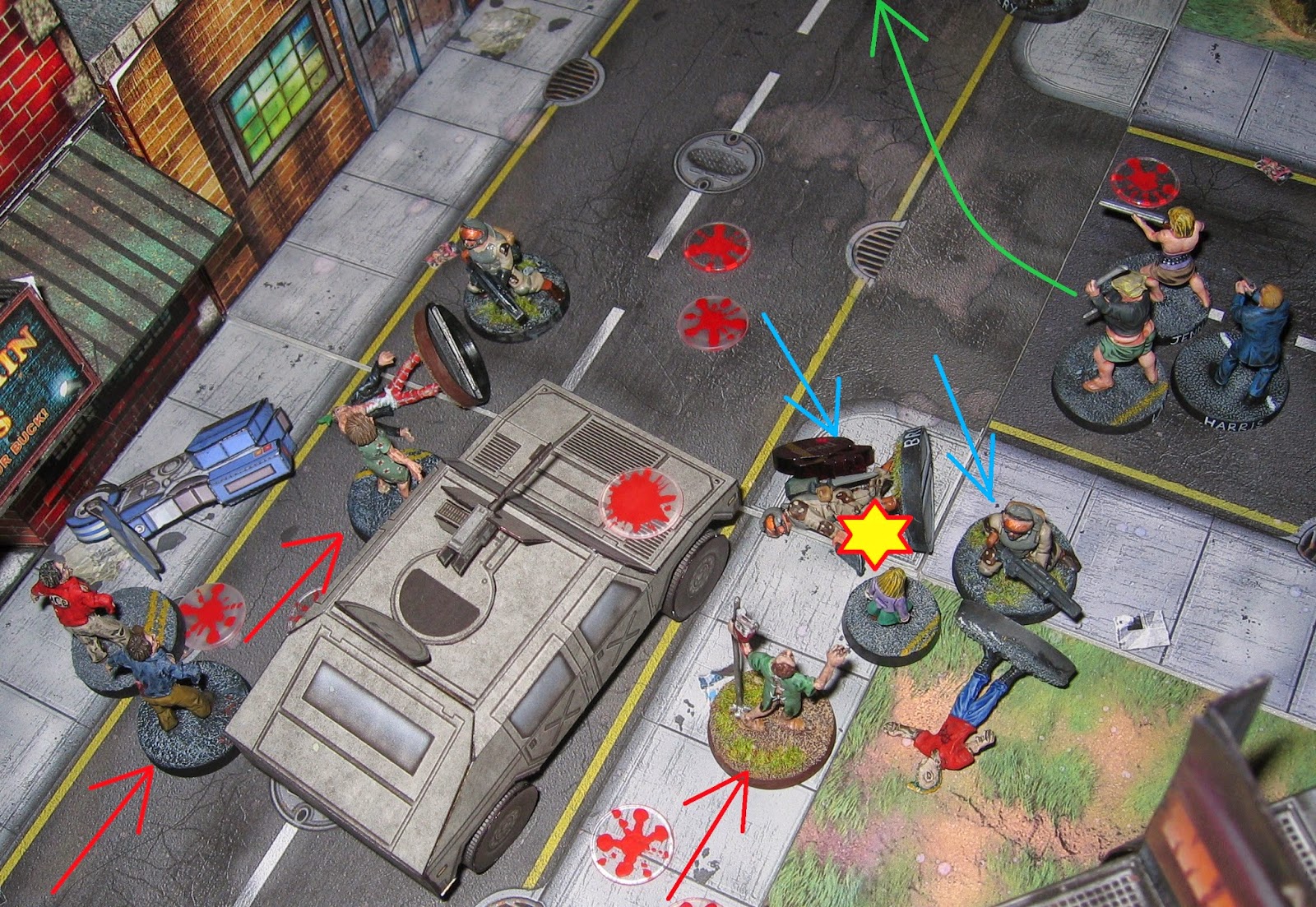 For a moment, it looked as if the extra soldiers might turn the tide, but then Lieutenant Brosnan made a terrible slip.  He ordered his men to cease fire and attack the zombies with knives instead of guns.  Whilst Connery and Van Damme managed to fell their victims, Brosnan missed his stroke against a small girl zombie.  She grabbed his hand and bit a finger off; when the Lieutenant reeled and fell over from the pain, she leaped upon him and tore his face off with her sharp, little teeth. 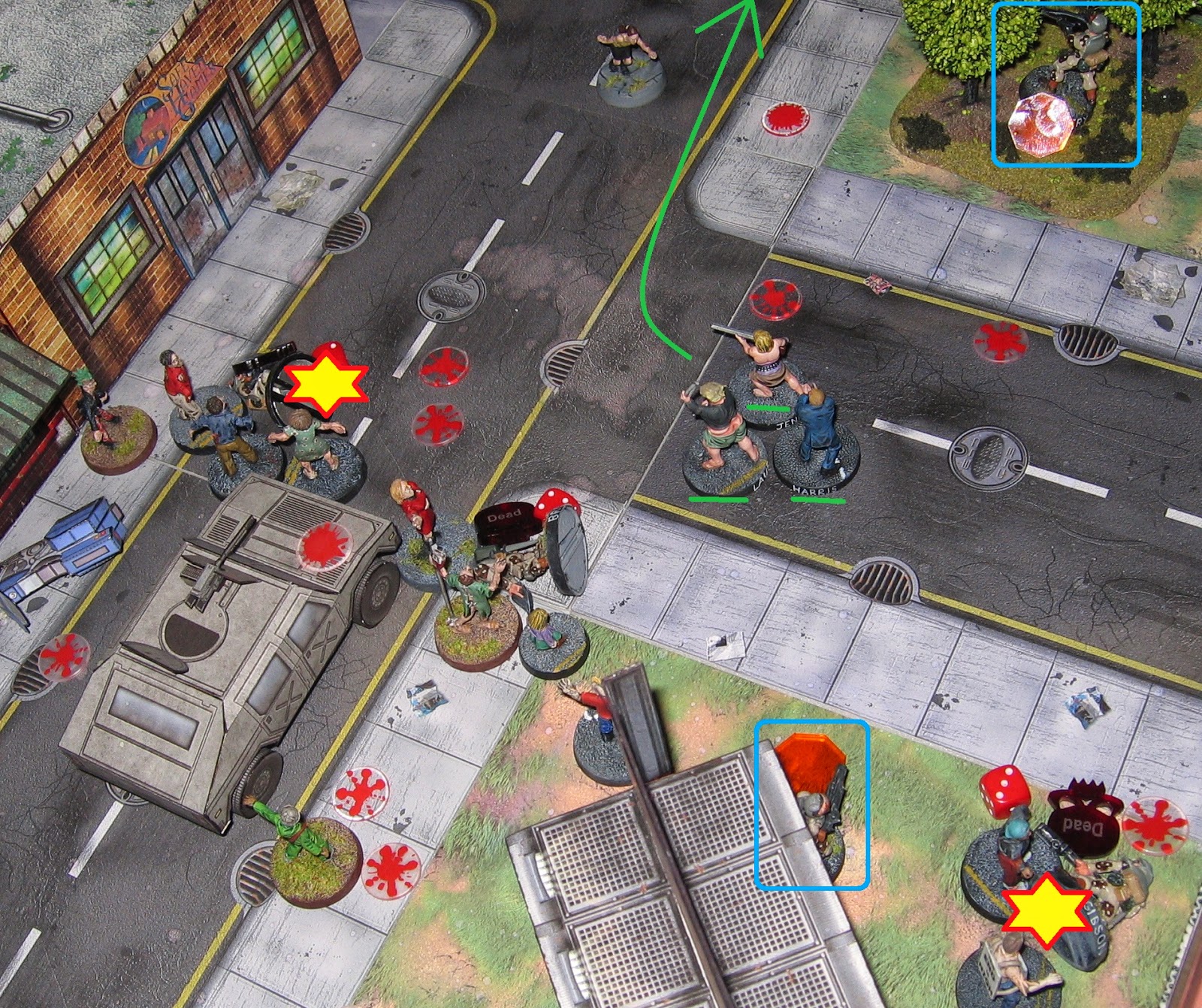 The resulting "Man Down" test went very badly for the soldiers.  4 of the 5 remaining members of teams 1 & 2 were close enough to see or hear the Lieutenant's screams of anguish and all of them were horrified and stunned into inactivity for at least one turn.  At this critical moment, the zombies advanced again and, meeting no resistance, promptly killed and started to eat both Van Damme and Gibson.  The other 2 squaddies were only saved because all of the zombies had closer targets than each of them.

The 3 prisoners decided that this would be a good moment to split, so they ran off as fast as they could (with their hands still tied behind their backs). 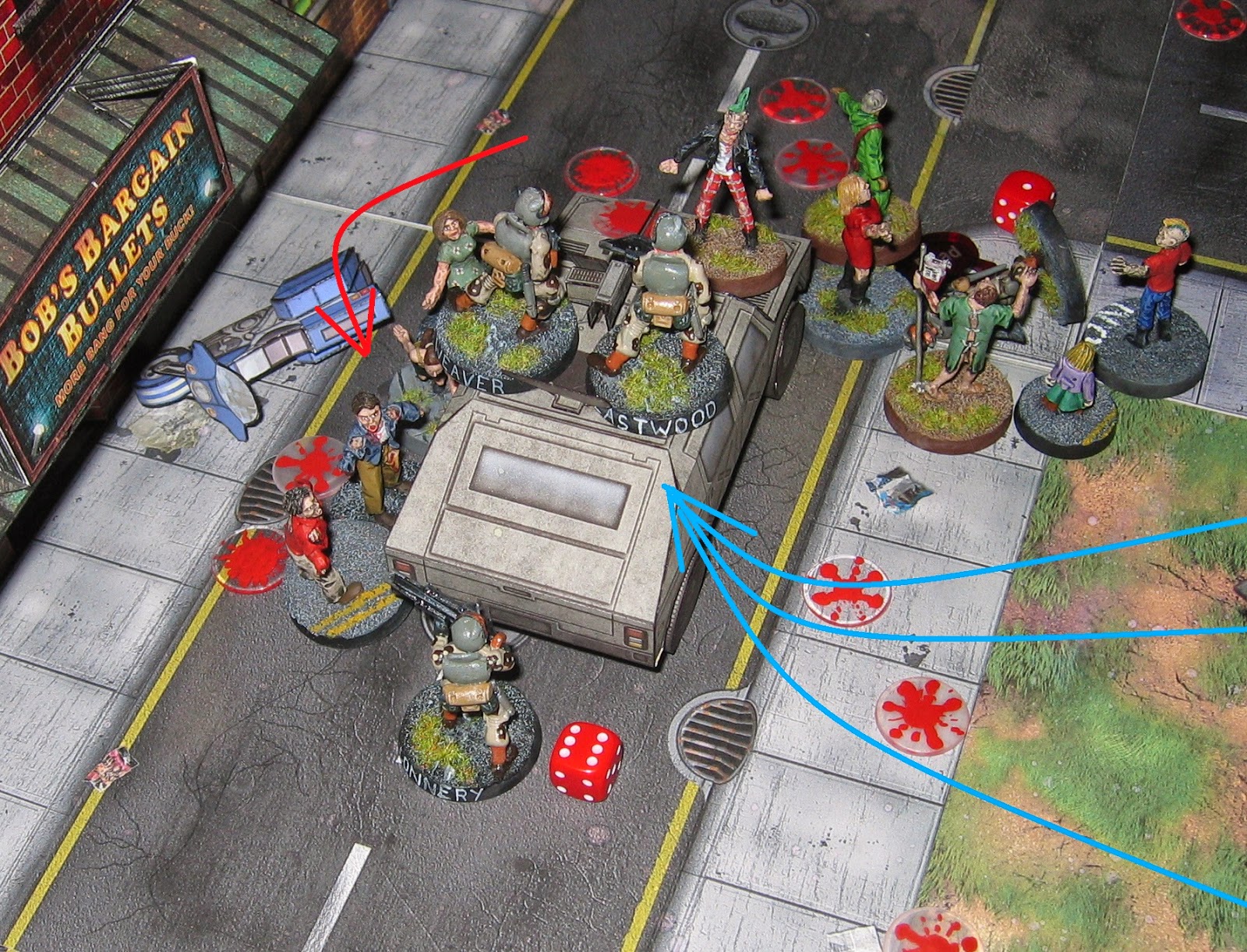 Once they had recovered from their initial horror, Eastwood and Weaver ran for the Humvee.  The zombies were all distracted by their feasting, so they didn't have any trouble in reaching the vehicle.  They waited a moment for Connery to join them, though by this time some of the zombies were beginning to look round in search of fresh prey.

Fortunately for the soldiers, Eastwood managed to start the Humvee on his first try, though his comrades had to fend off some fresh attacks before the vehicle could start to move. 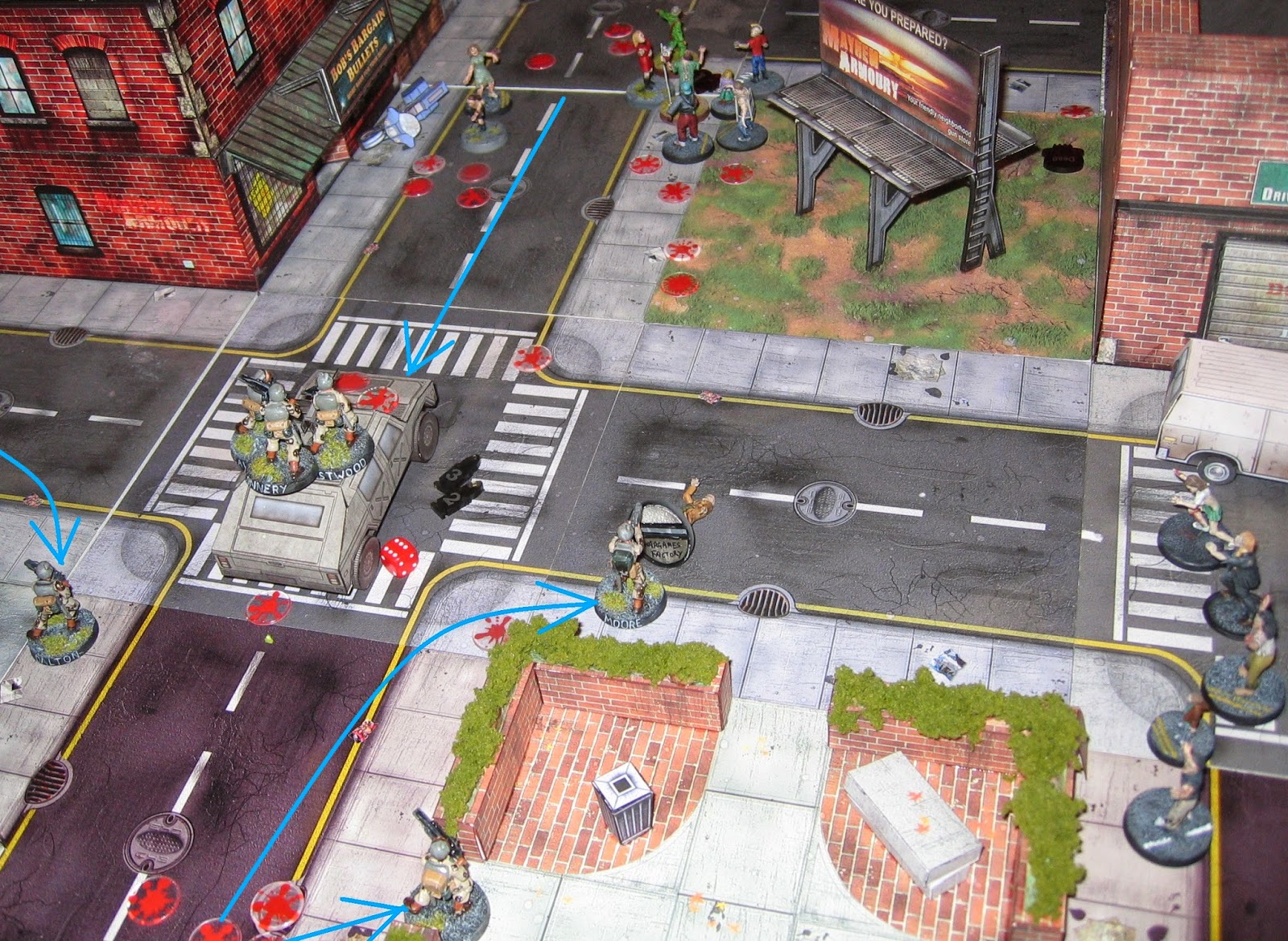 Finally, the Humvee reversed away from the immediate danger, just as team 3 came up the road to assist.  Even the wayward Dalton rejoined team 3, having finally finished off all the zombies that had attacked him one after the other.  Was this the break that the soldiers needed?  Could they turn this around and sweep the area clean? 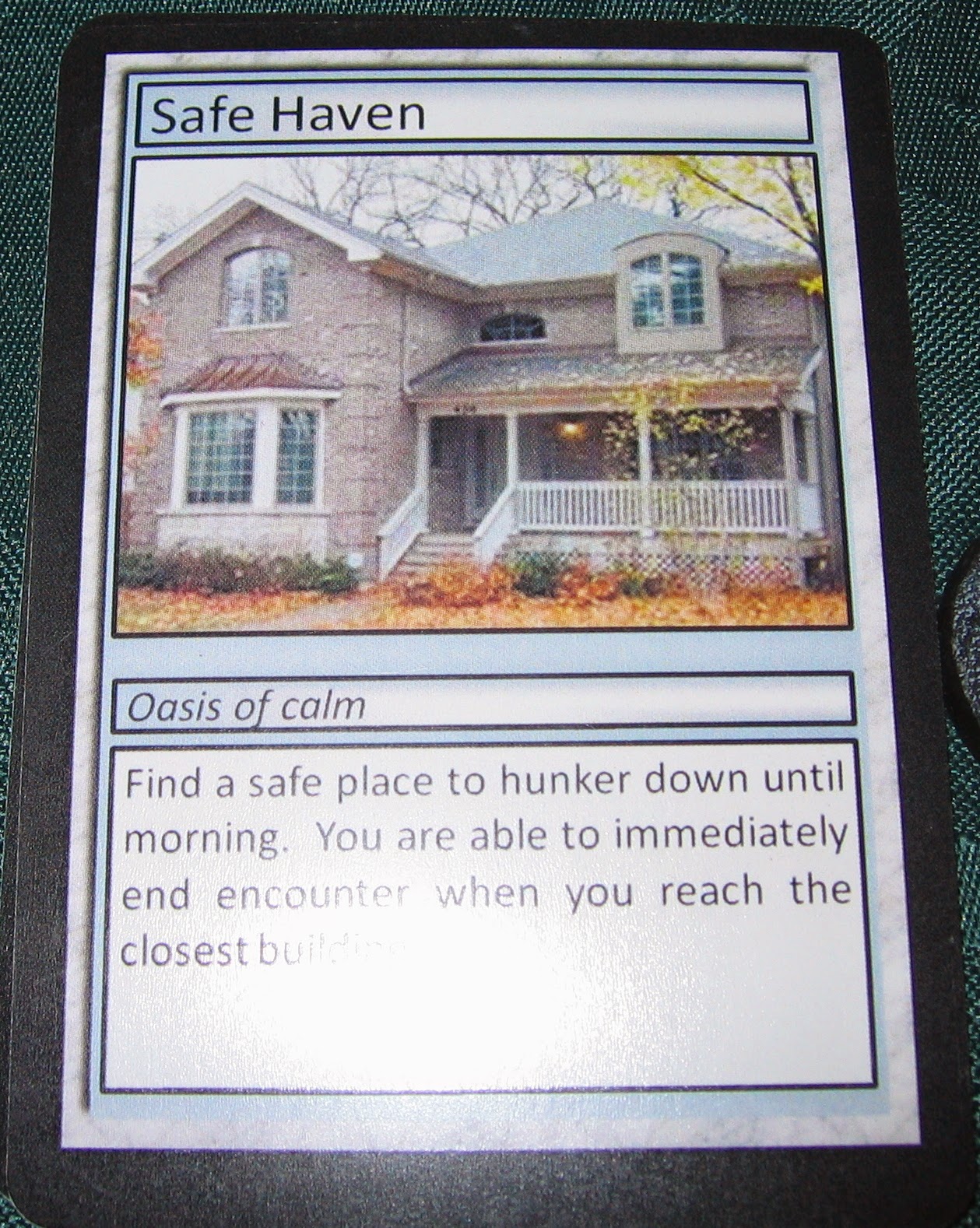 Another random event occurred, though it wasn't immediately obvious what benefit a Safe Haven would be to the squad. 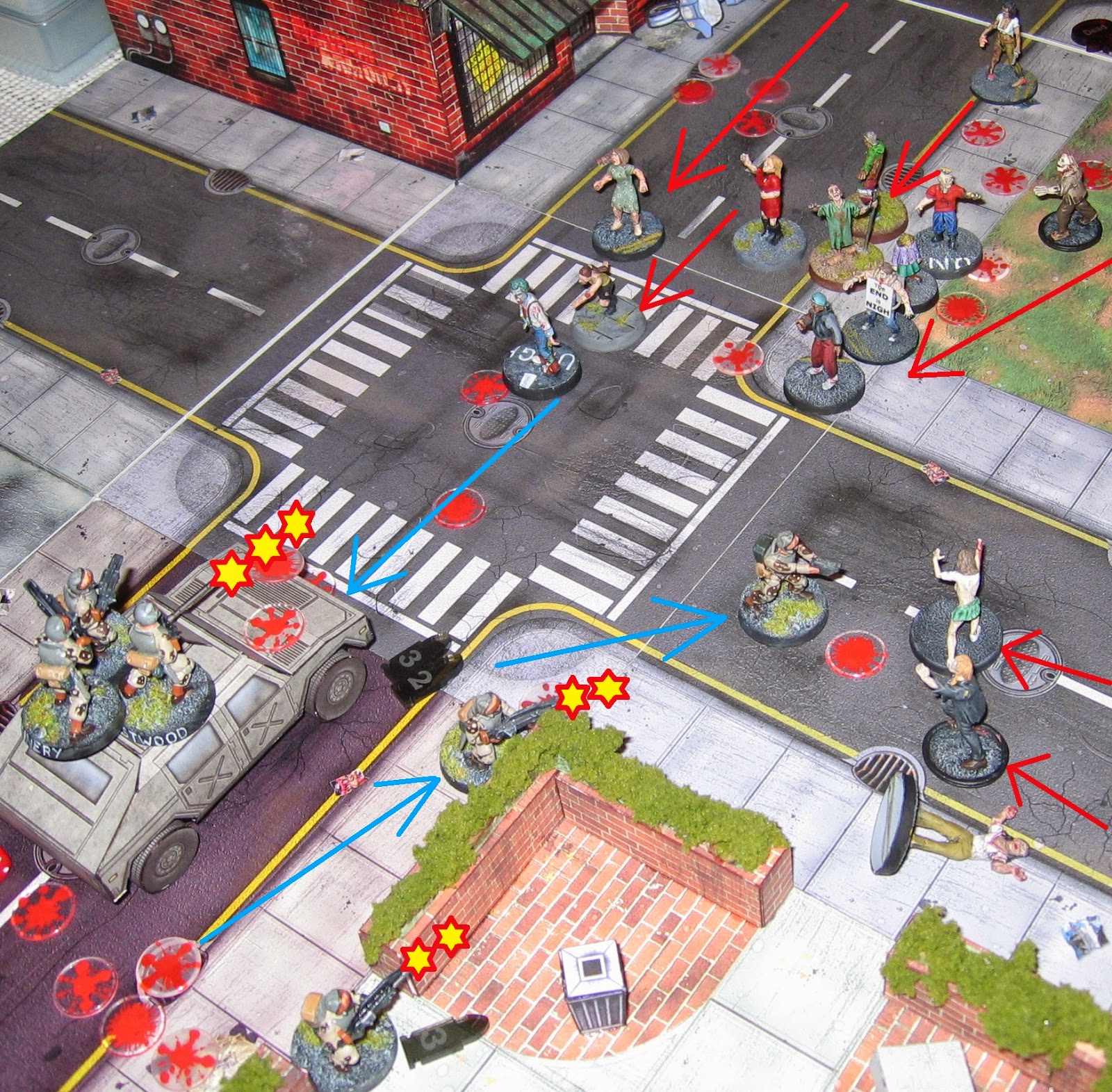 Once again, the temptation to use their automatic weaponry was too much for most of the soldiers.  After all, there were plenty of targets; perhaps some automatic gunfire could thin out the mob a bit?

Moore had other ideas; he thought that a knife might work better.  He was slightly ahead of his colleagues and had dispatched a zombie successfully, when... 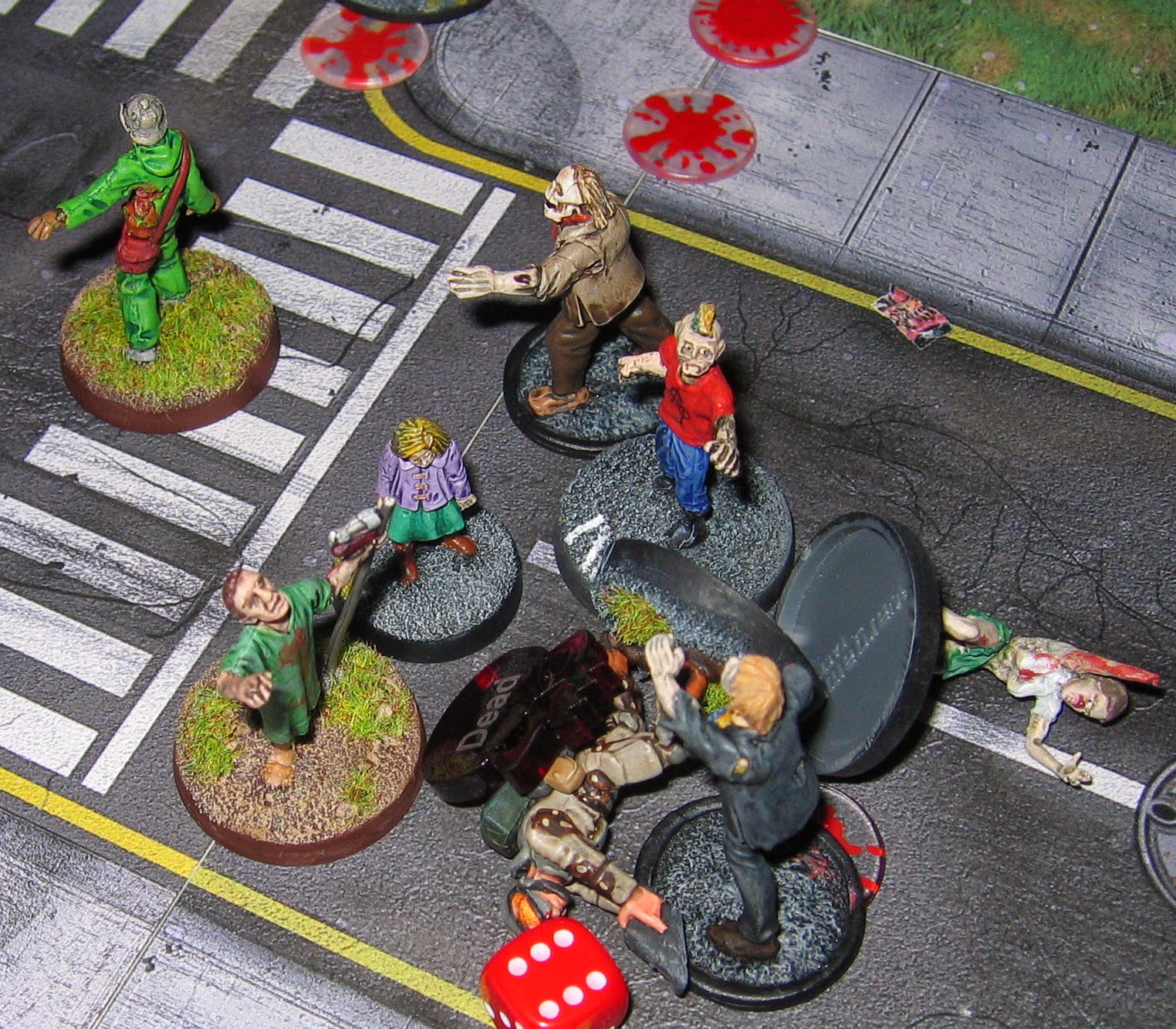 ...he found himself cut off and surrounded by the ever-growing numbers of hungry zeds.  Although Moore fought the first one to a standstill and knocked down the second, the third, fourth and fifth zombies overwhelmed him.  Moore vanished beneath a pile of bloodied, clutching arms. 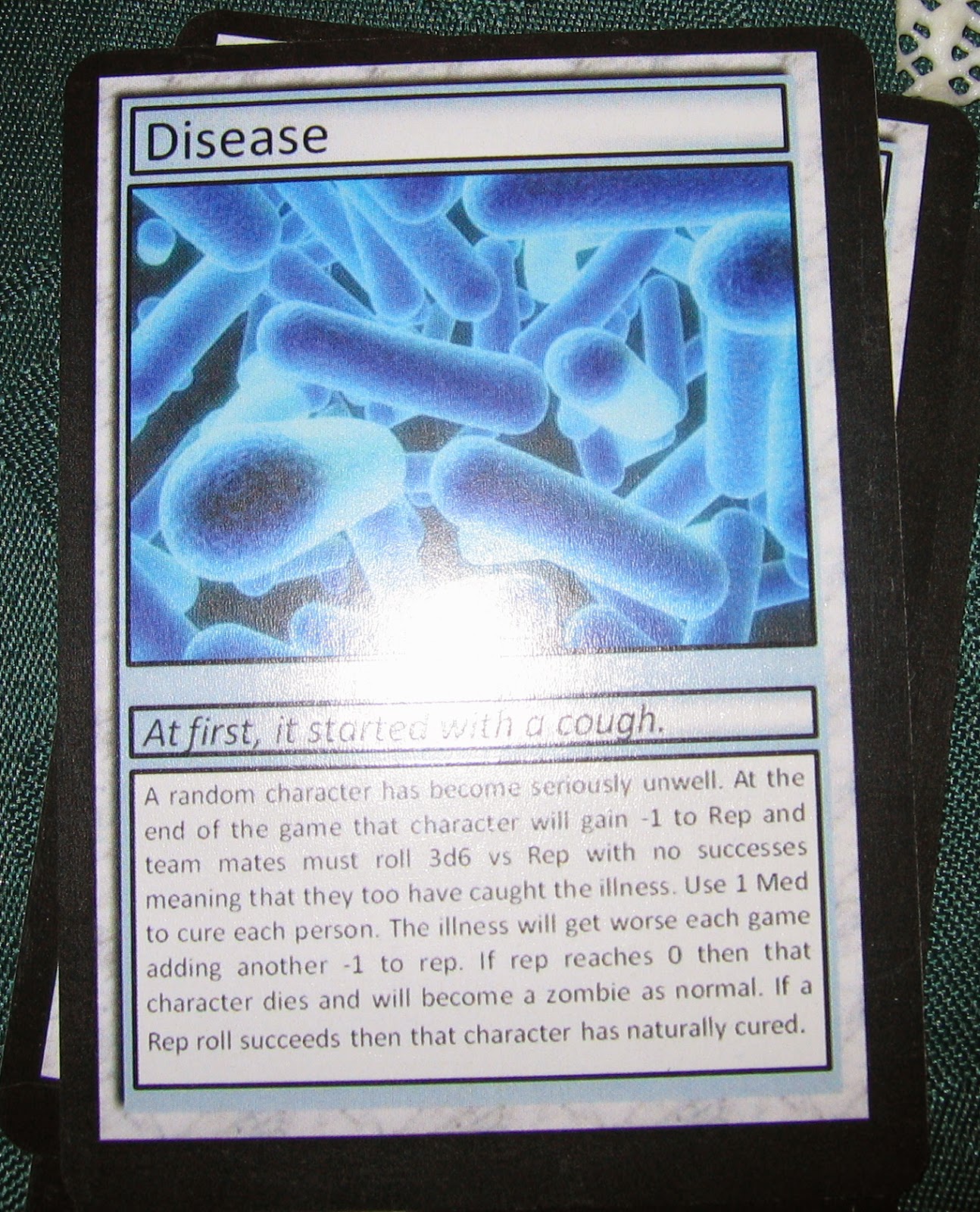 Time for another random event.  Hackman sneezed, though in the heat of the battle no-one else really noticed.  He'd been feeling fine this morning, but had a bit of a sore throat now that he came to think about it. 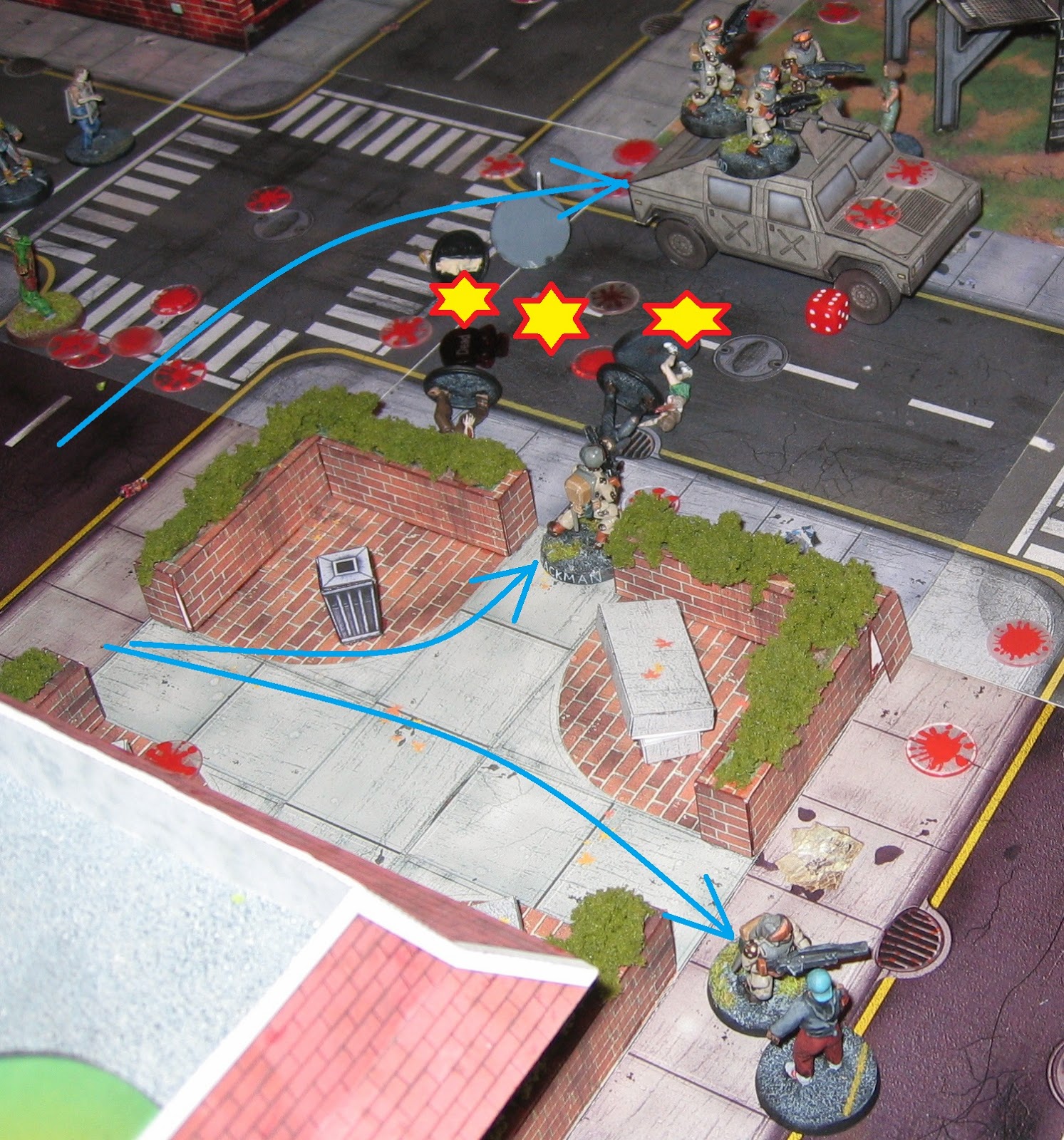 The Humvee moved forward again as Eastwood hit the accelerator.  He crunched round the corner, barely able to see where he was going because of the zombie corpses already caught on the bonnet of the vehicle.  As it was, the Humvee clipped the feeding frenzy over Moore''s body and sent zombies flying in all directions.

On foot, Hackman and Dalton moved through the park, trying desperately to keep away from the larger groups of zombies. 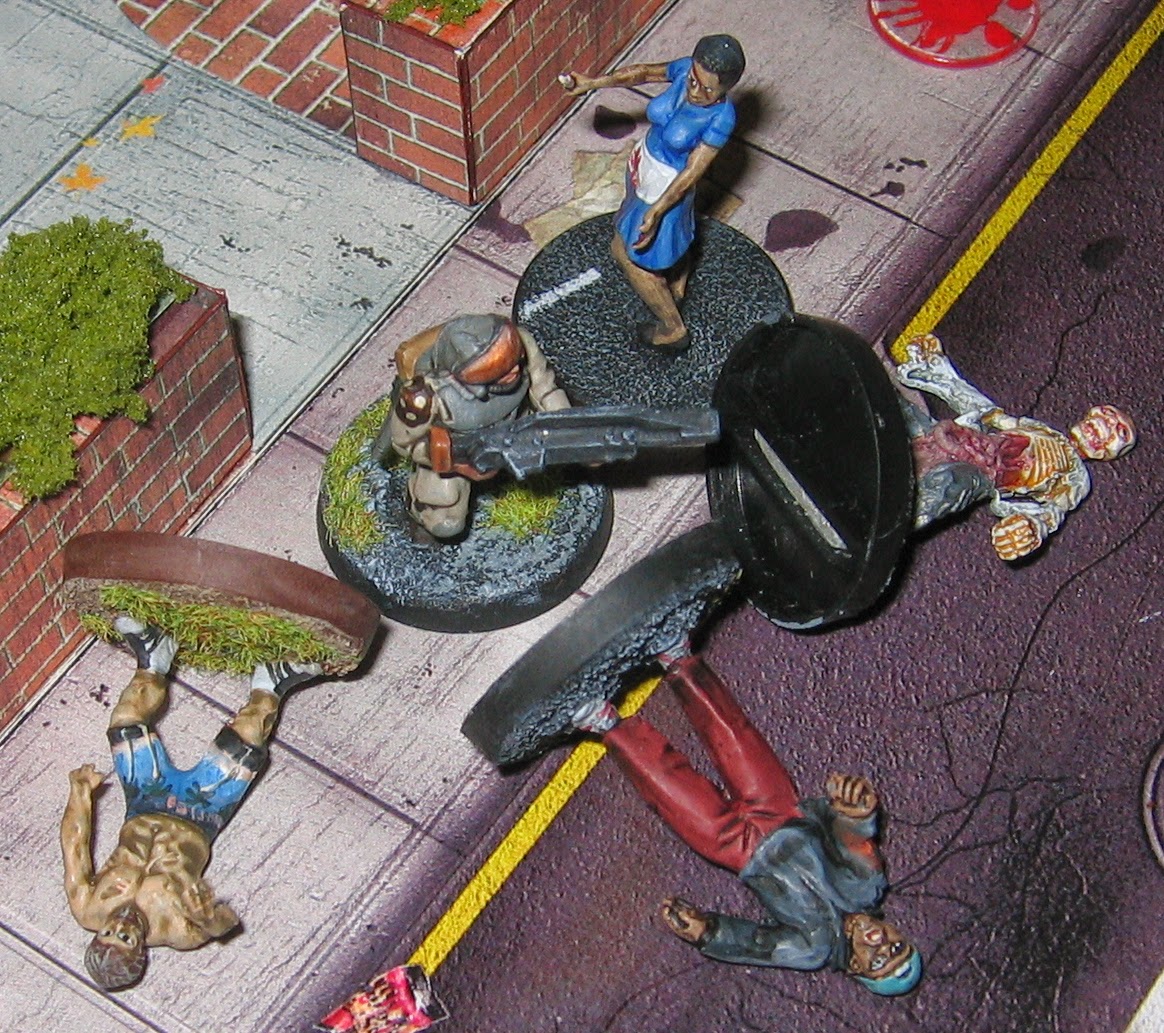 This time it was Dalton who found himself alone and outnumbered.  Unlike his predecessor, he managed to keep knocking the zombies down so that he never had to face more than 2 or 3 at a time.  For several rounds, he held his own in this manner until Hackman ran over to assist and finish off those zeds that were still moving. 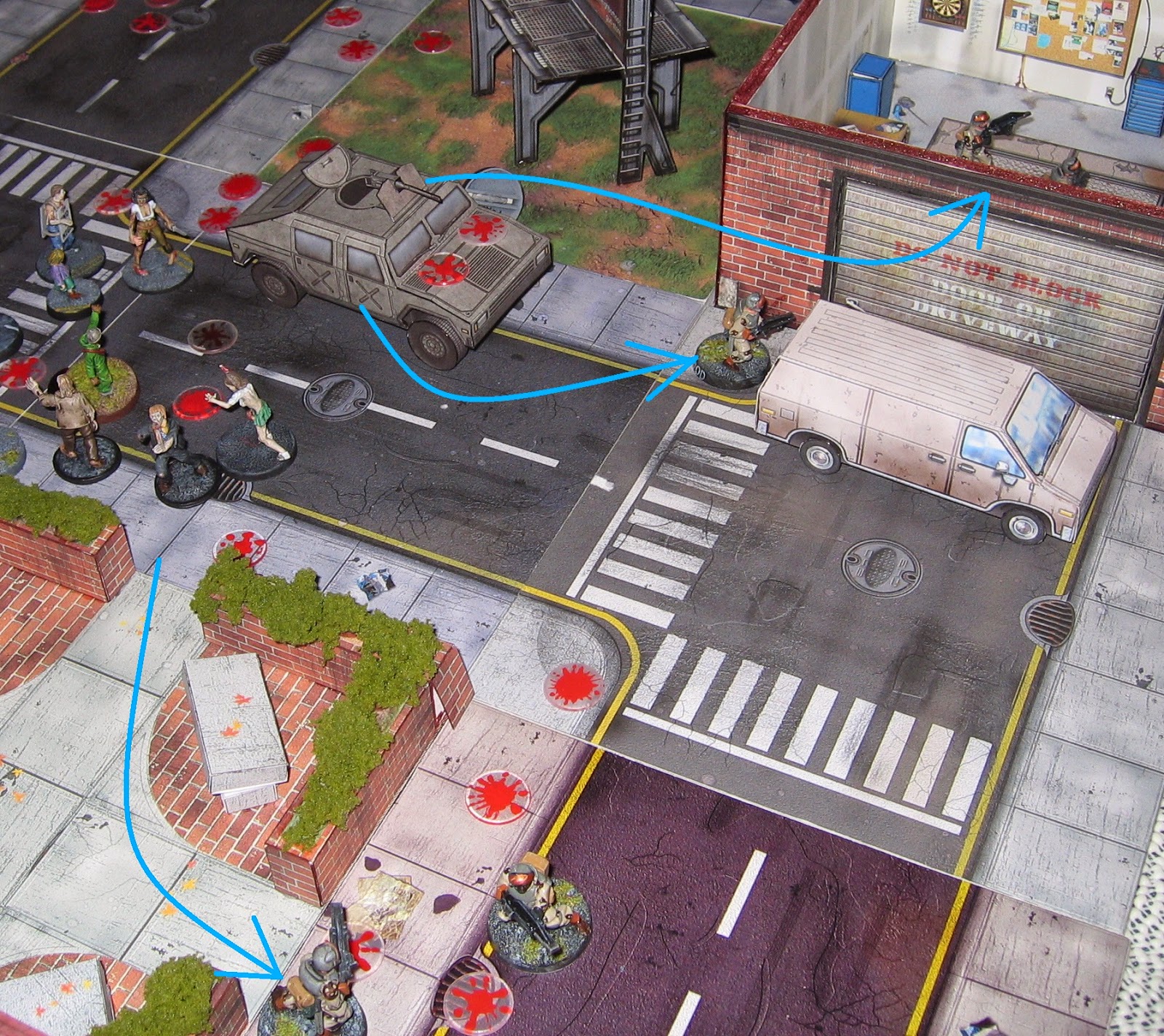 Eastwood, in the Humvee, didn't fancy his chances of manoeuvring the vehicle back on to the road.  "Everybody out!" he commanded.  "Make for the garage - perhaps we can hold them off there!"

The crew disembarked swiftly and ran for the building whilst the zombies from the road smash were still picking themselves up.  [Remember that "Safe House" event earlier?  There was something about the garage that repelled the zombies, for now at least.  Perhaps it was the oil fumes that masked the scent of the men's blood and sweat?  Maybe the zombies had vestigial memories and thought of it as a dangerous place that was unlikely to be a source of food.  Or the light shining off tools, hubcaps and mirrors confused their senses?  Who knows?] 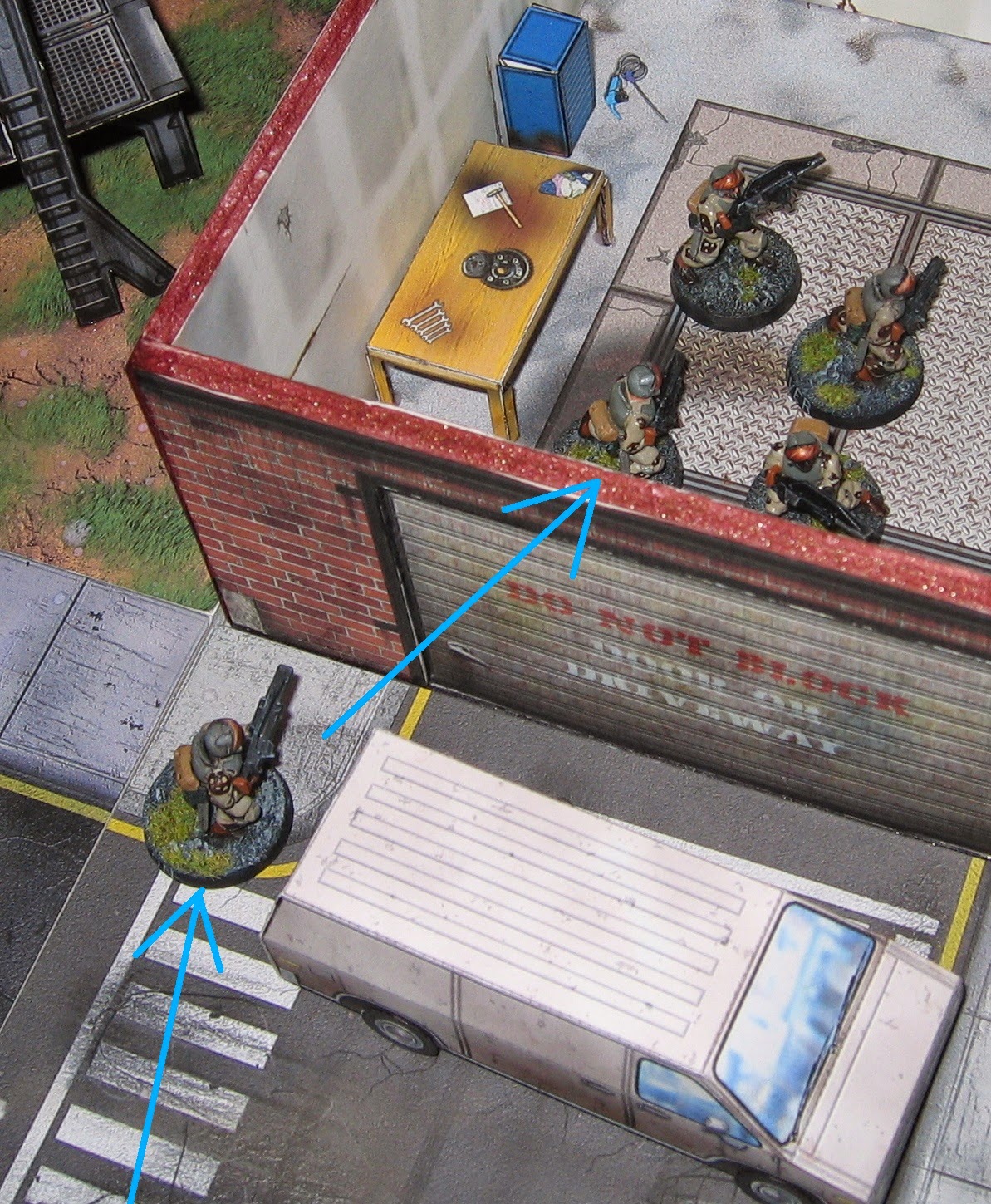 Seeing this, Dalton and Hackman ran to join the rest of the squad.  They closed and barricaded the door and then slumped to the ground, ragged with exhaustion.  As they listened to the moans from the street, they knew that it would be a long night...

This was a disaster, no doubt about it!  4 of the 9 soldiers were dead, 3 of the prisoners had run away and the other 2 were still locked up inside the armoured truck.  Although it probably didn't matter now, some of the worst violence inflicted by (and to) the squad had made it onto the early evening news.

We rolled for the effects of the illness that Hackman had contracted.  He recovered without any ill effects, while none of the other soldiers caught it.  I suppose that's something positive, at least!
Posted by Colgar6 at 14:14