Today, my friend Steve visited and we spent the entire day gaming.  This doesn't happen very often, usually because of health issues or family needs in one or both of our households, but sometimes we do find a suitable conjunction in our calendars.

Anyway, we played a total of 3 miniatures games: 1 of Song of Blades and Heroes and 2 of 7th Voyage.  All of these will be described in due course.  I finished off the afternoon by introducing Steve to The Awful Green Things from Outer Space, in which I played the Green Things and lost very badly.  Still, I did destroy the crew's robot. 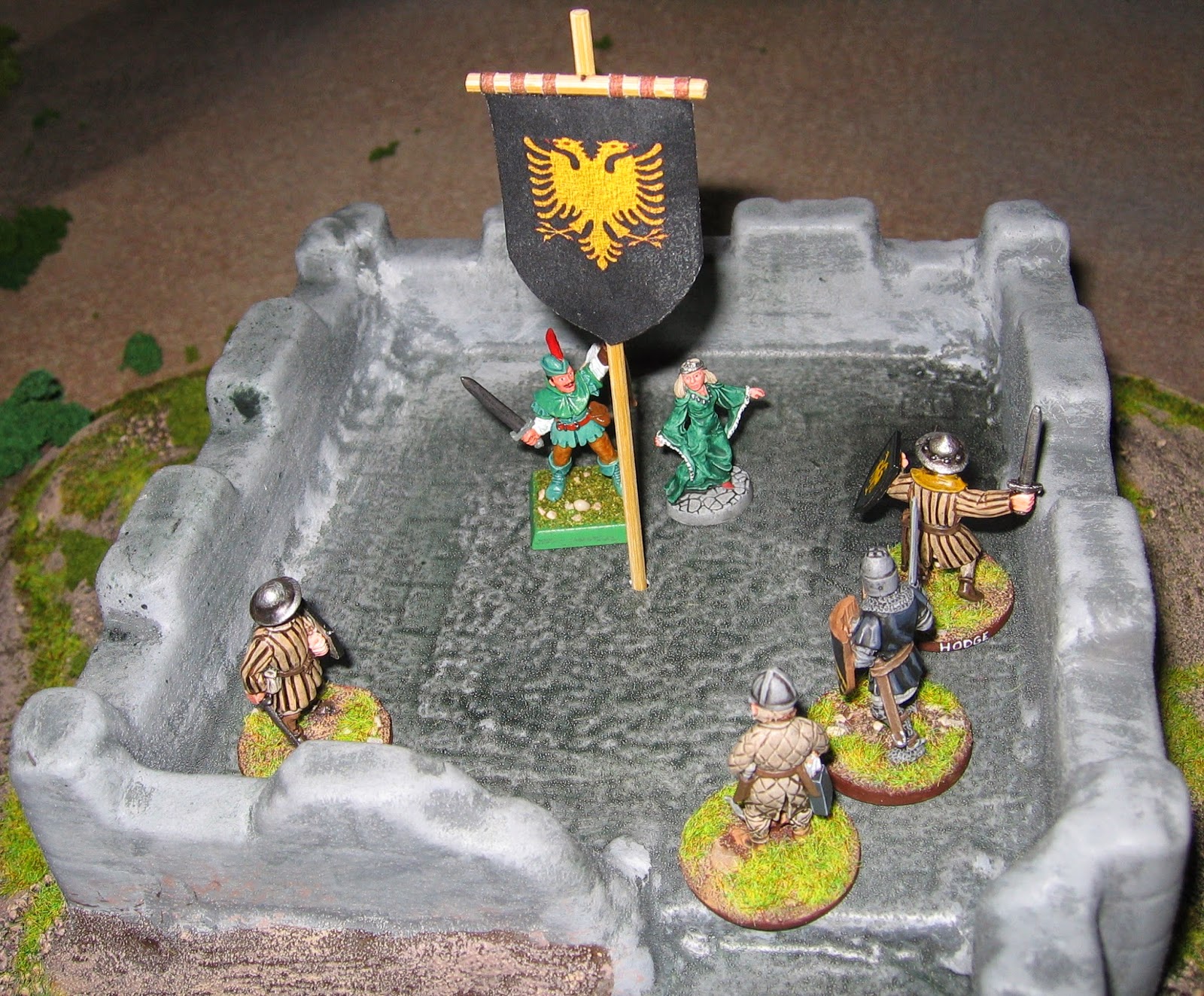 After the disaster at the tournament, the captive outlaw Robin Hood was thrown into the dungeons of a small castle to await the king's justice.  Maid Marion has learned of this and has vowed to assist him in escaping.  She has tricked her way past Sir Godfrey, the castellan, and his guards and has managed to open Robin's cell and pass him a sword.  Can the pair now escape to the safety of the outlaws' forest? 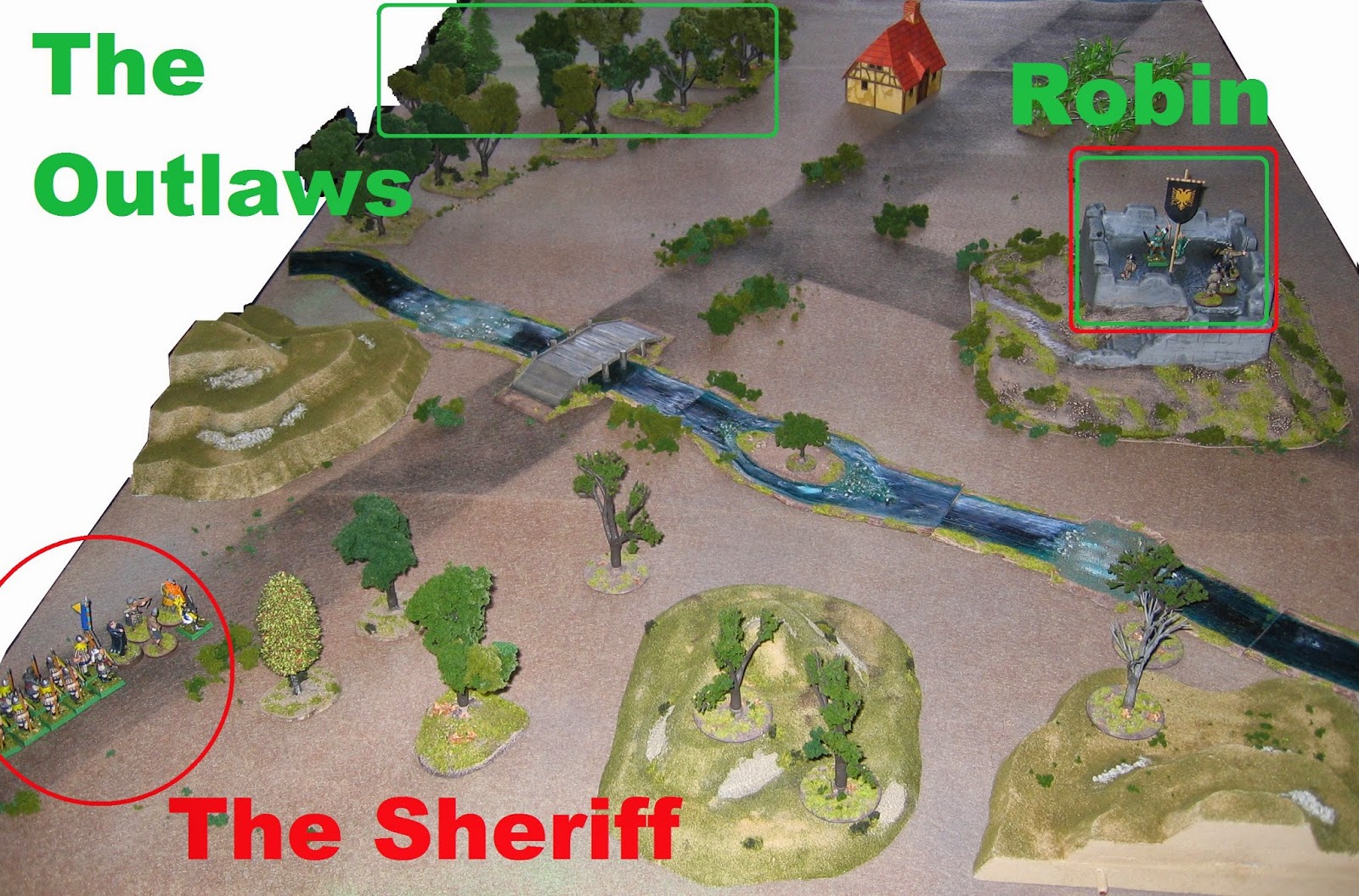 Robin and Marion must escape to the edge of the table behind the forest.  To do this, they will need to overcome or evade the guards at the castle and flee before a large relief force of the king's men arrives.  Some help is available though: there are some further outlaws in the forest.

The outlaws take the first turn. 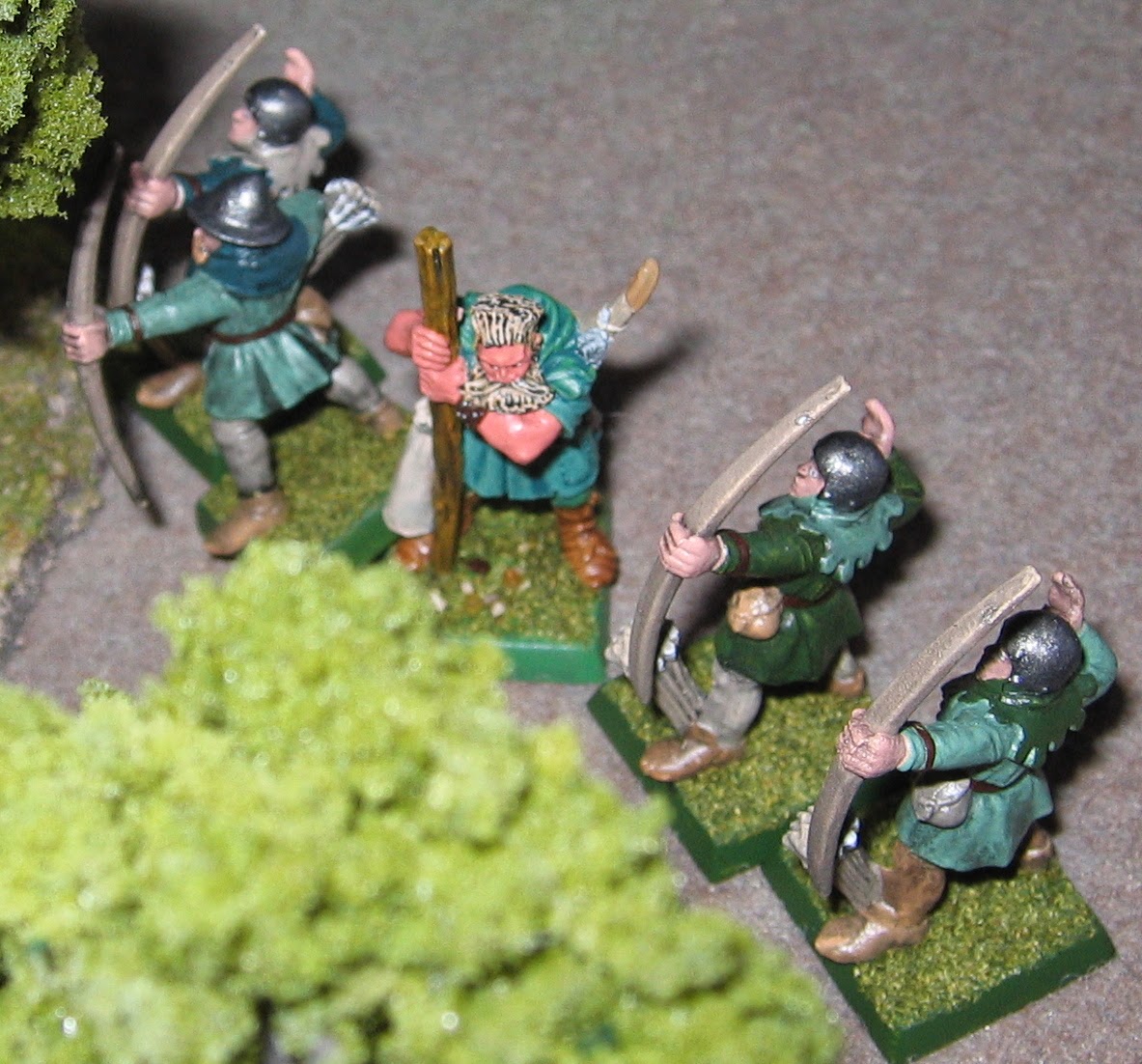 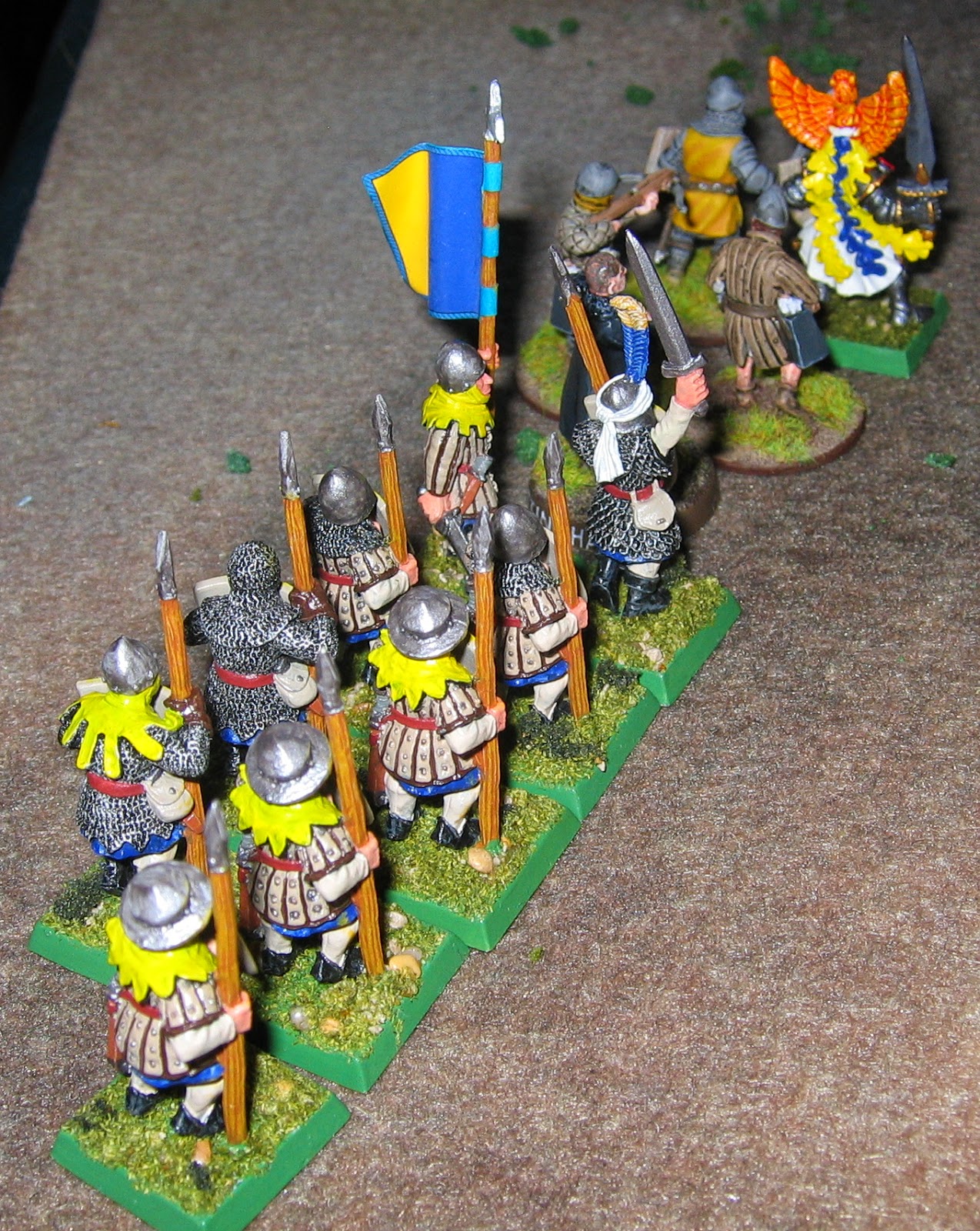 The sheriff has a lot more men than the outlaws, but most of them are rabble and are therefore not very good.  His knights are better than the average merry man, though. 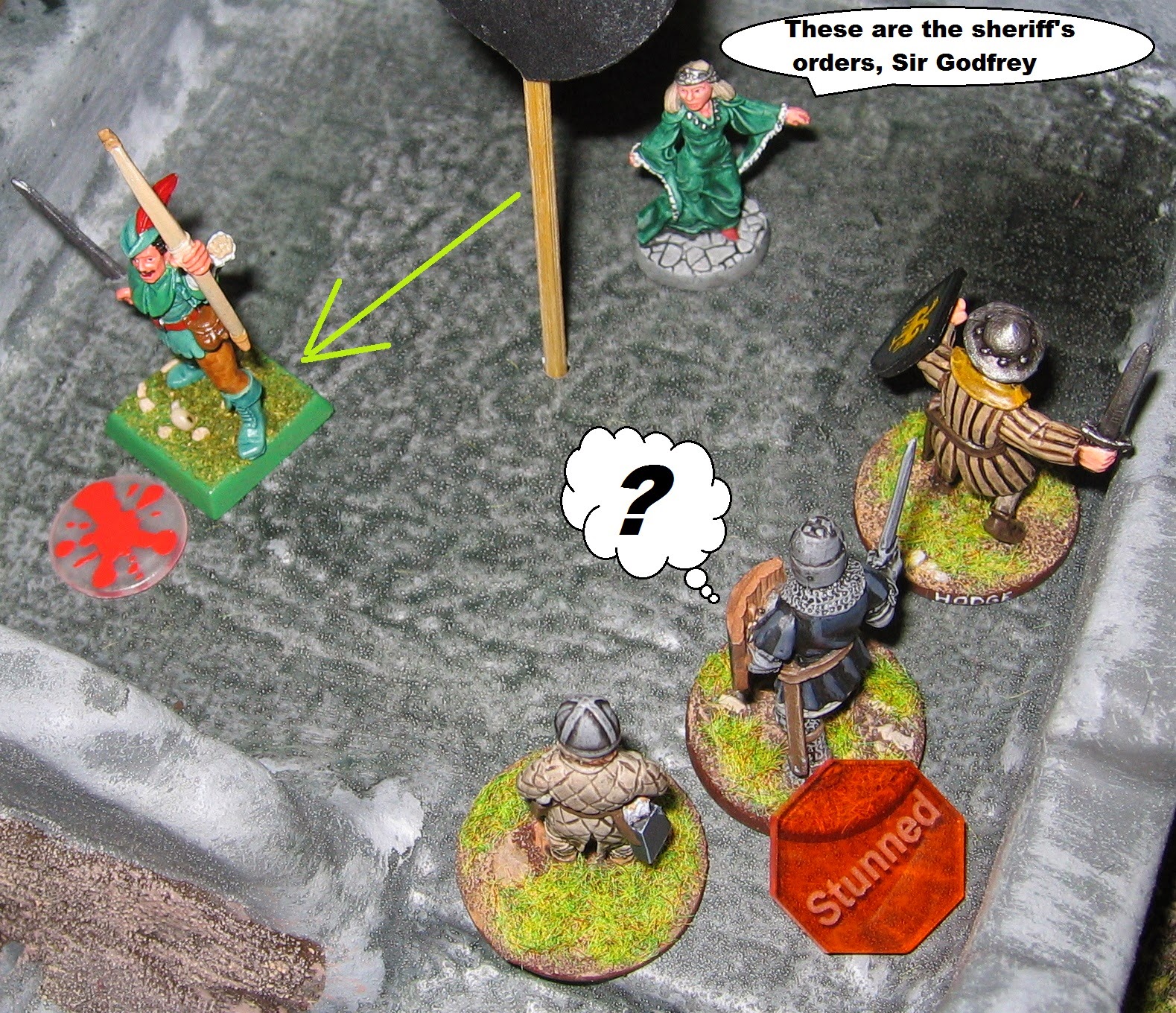 Straight away, Marion told the castellan that she was absolutely not helping Robin Hood to escape, but instead just making a simple visit to enquire after the prisoner's welfare.  In the background, Robin slew one of the guards. 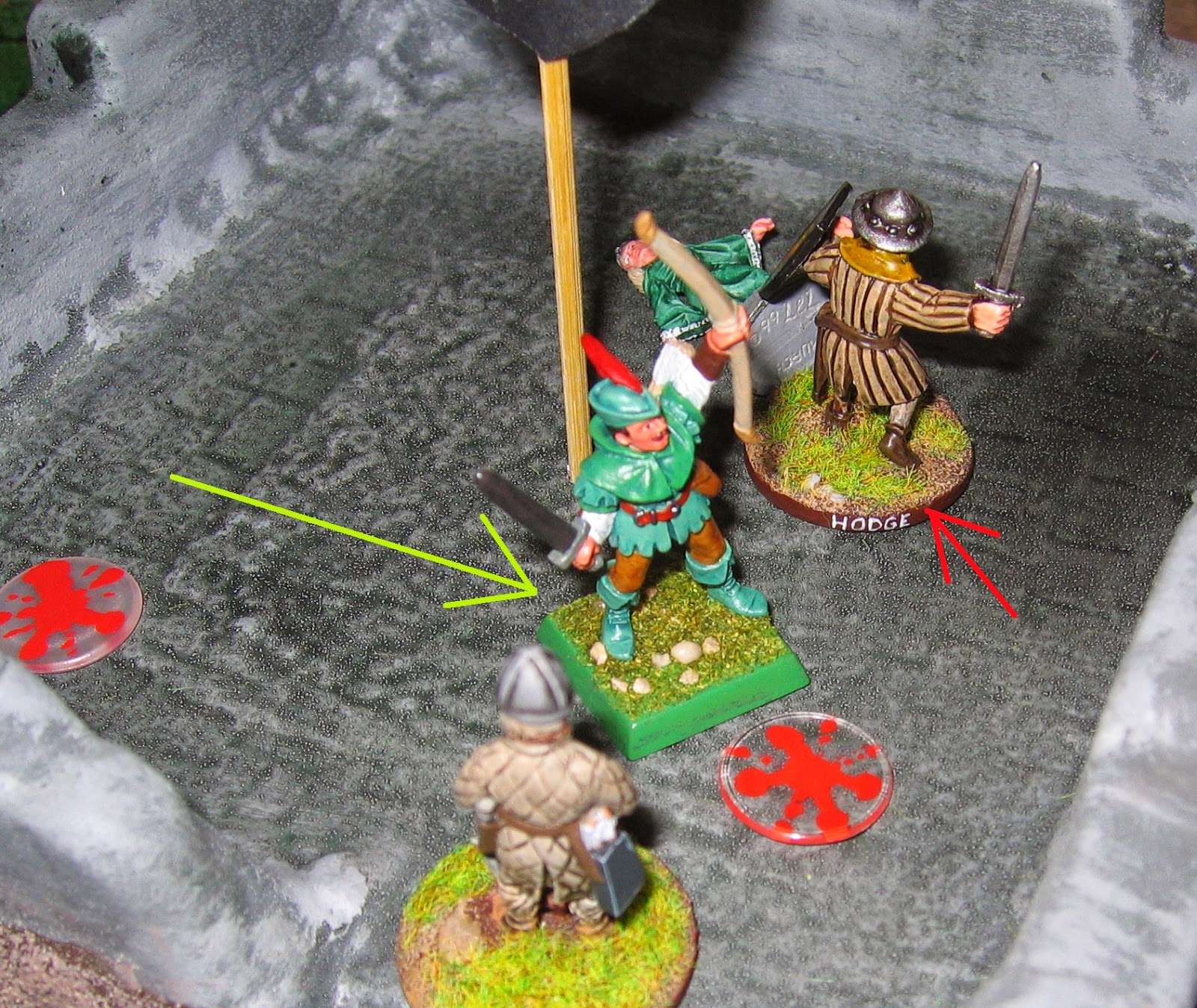 The outlaw chieftain continued his rampage; he charged at the confused knight and ran him through.  However Hodge, the remaining man-at-arms, was a bit quicker on the uptake than his boss had been.  "You bitch!" he shouted at Marion.  "You'll pay for this!".  He stepped forward and smashed Marion to the ground. 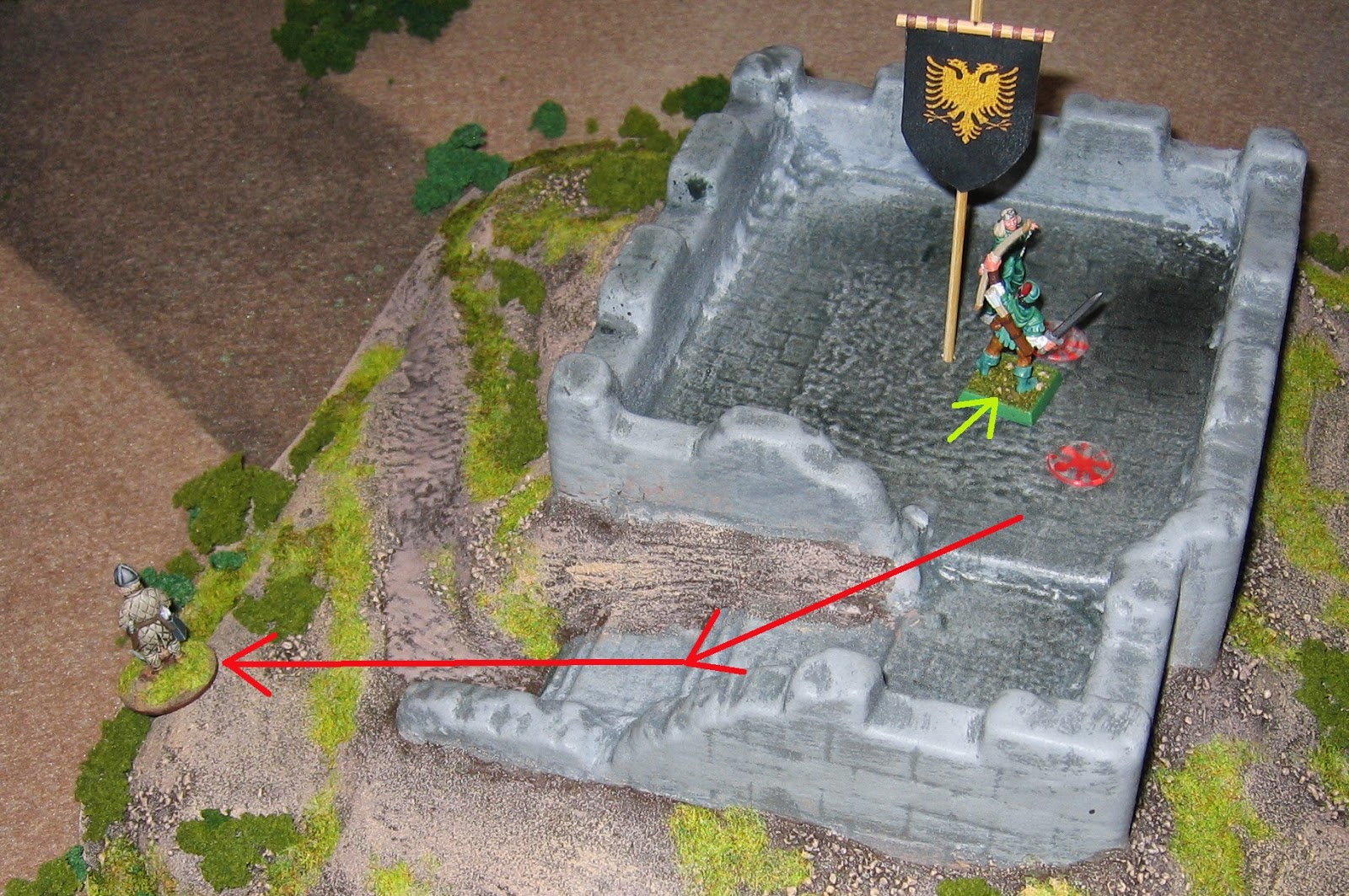 Bruised but still defiant, Marion clung to the enraged guard and impeded him enough for Robin to turn and slay him too (gruesome kill).  This was too much for the remaining crossbowman, who half ran and half tumbled down the steps to get away from the victorious outlaw. 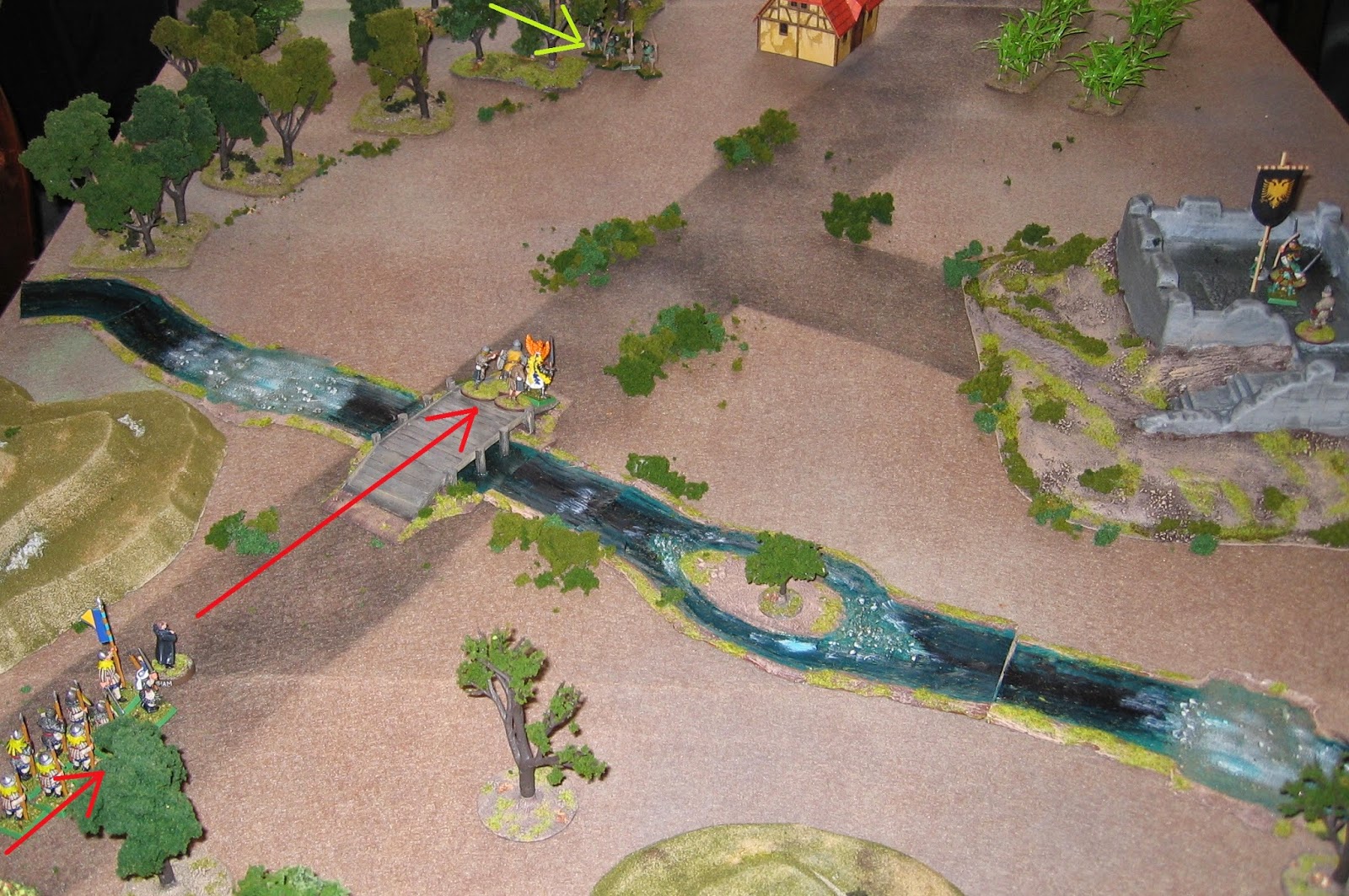 The sheriff's column were still marching steadily along the road (I just couldn't get them to move any faster!), though the knights and crossbowmen were running on ahead.  They could see outlaws on the edge of the forest now, even though they were't yet aware of the breakout attempt at the castle. 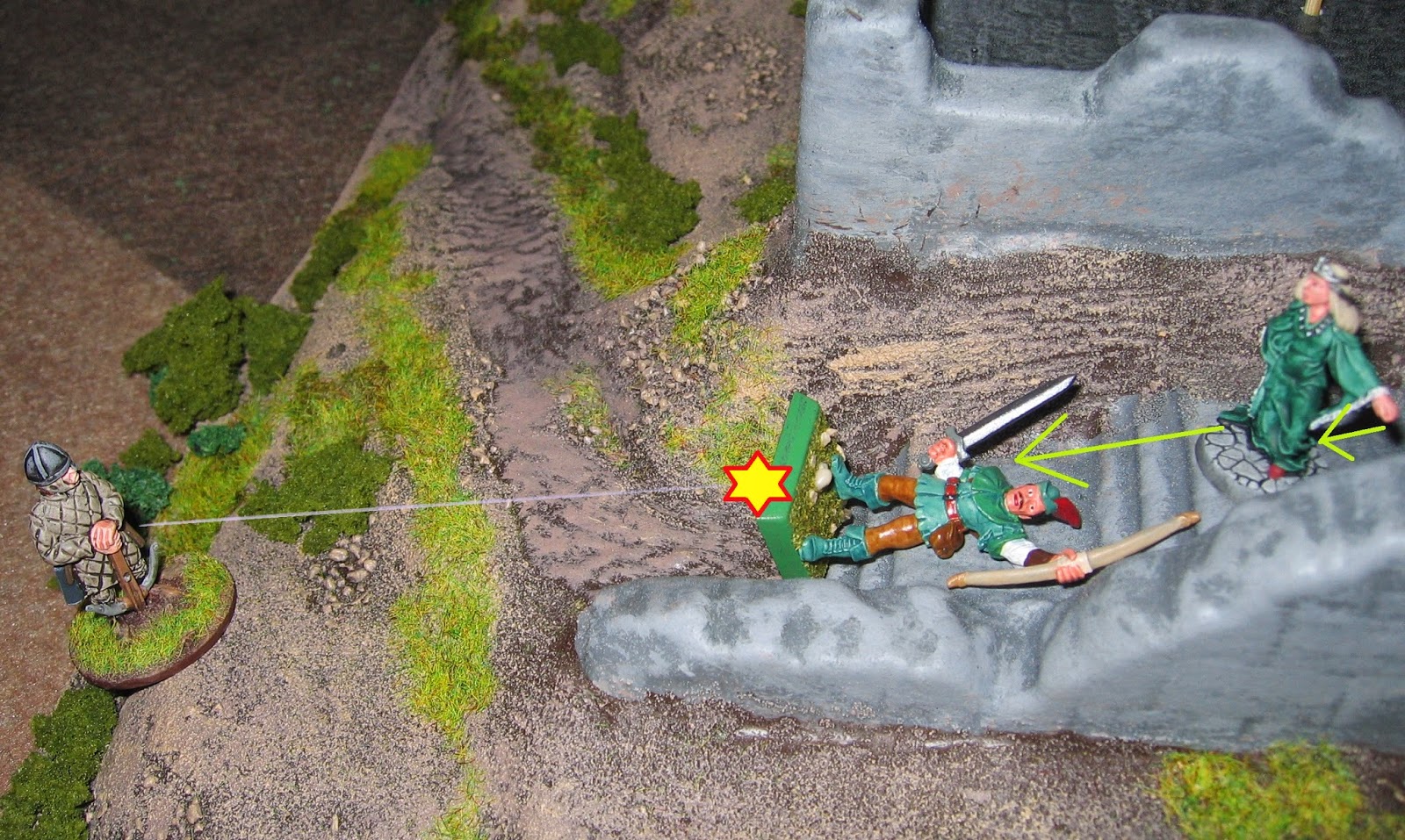 Thinking that they were safe now, Robin and Marion ran down the steps of the castle.  They hadn't realised that the last remaining guard had stopped nearby.  He fired his crossbow and although the bolt missed, the distraction caused Robin to fall down several steps (ouch!). 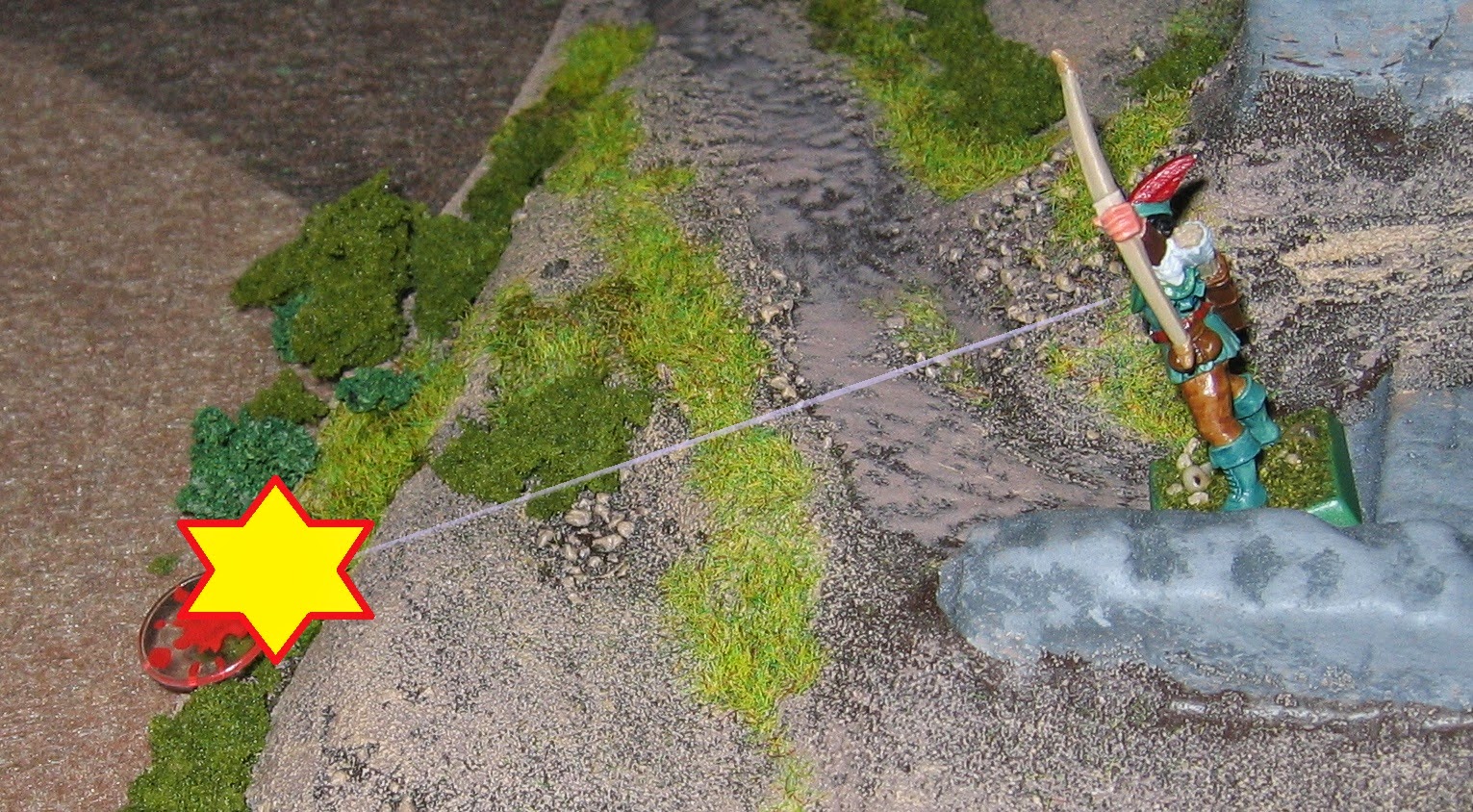 Recovering quickly, the master archer loosed an arrow of his own at the troublesome crossbowman and slew him (another gruesome kill, but there were none of the Sheriff's men in range to be bothered by this). 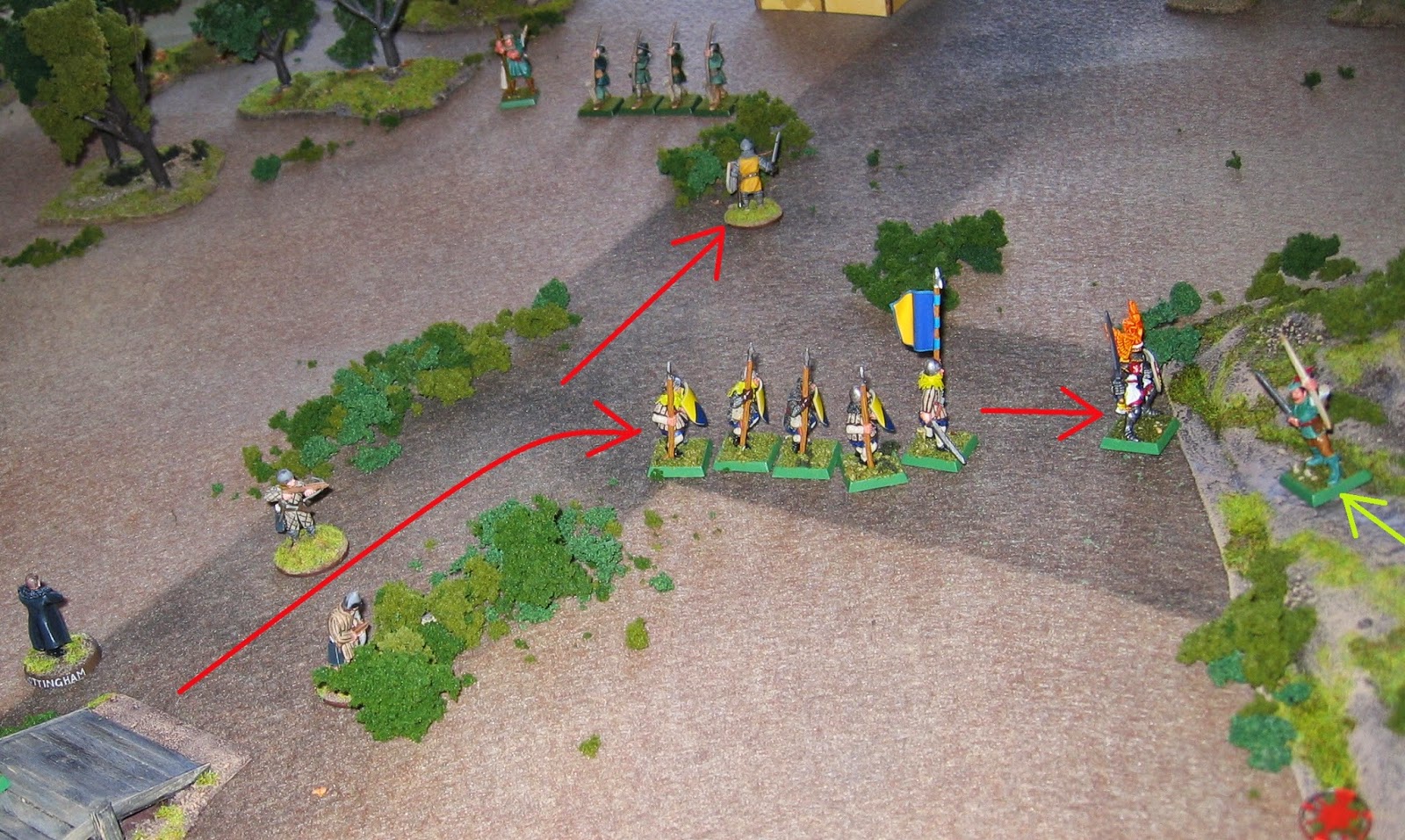 Did the crossbowman die in vain?  Perhaps not, for the delay had allowed the vanguard of the sheriff's column to reach the road junction.  Just as Robin and Marion ran down the path towards their friends, Sir Guy of Gisborne stepped forward from his men to challenge the outlaw! 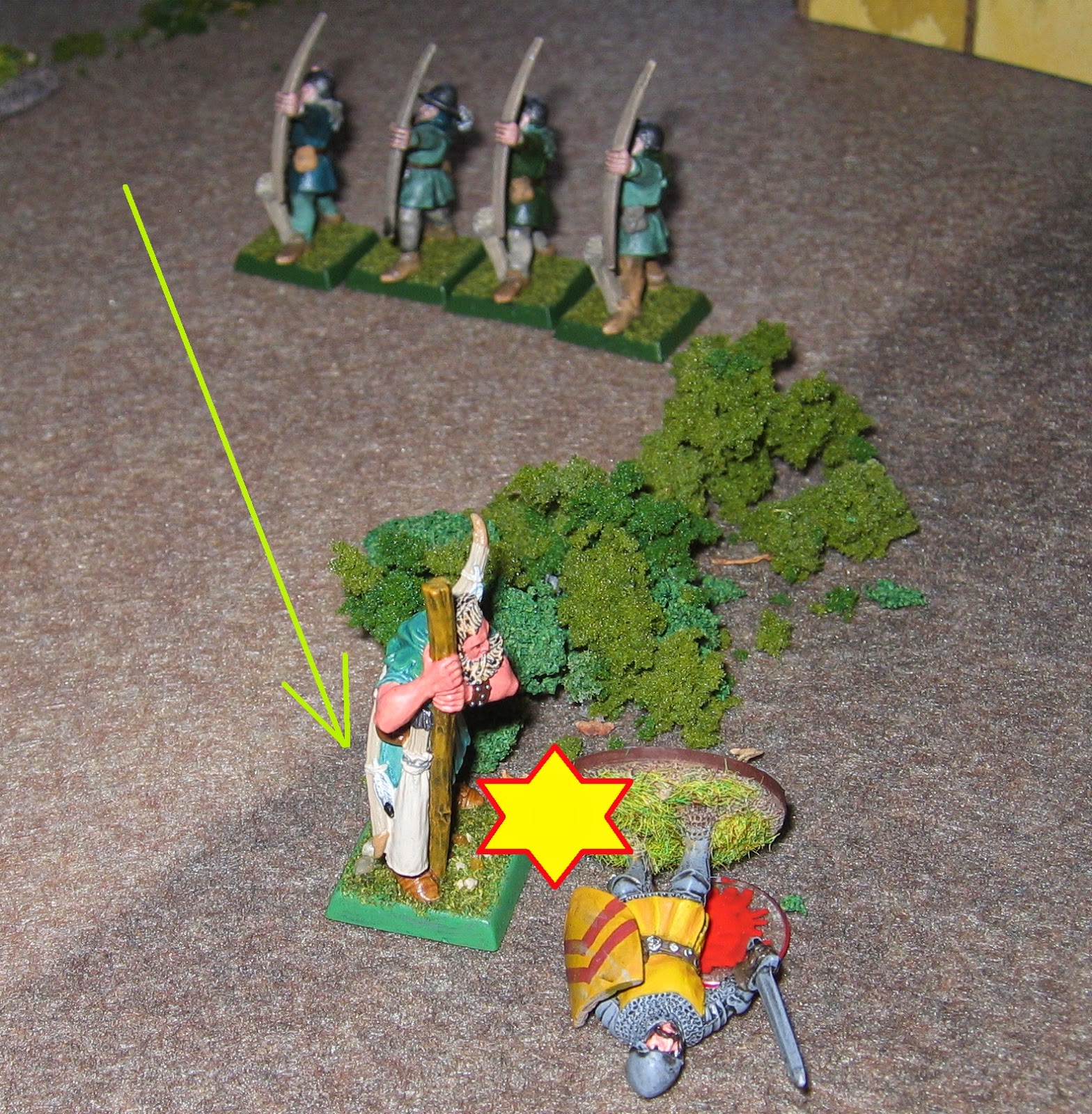 On the fringes of the forest, Sir Walter held off the merry men by hiding behind a hedge.  The outlaws loosed a few desultory arrows at him, but the knight was untroubled by this.  However, after a few turns, Little John had had enough.  "Sod this!" he exclaimed as he strode forward and felled Sir Walter with a single blow from his staff. 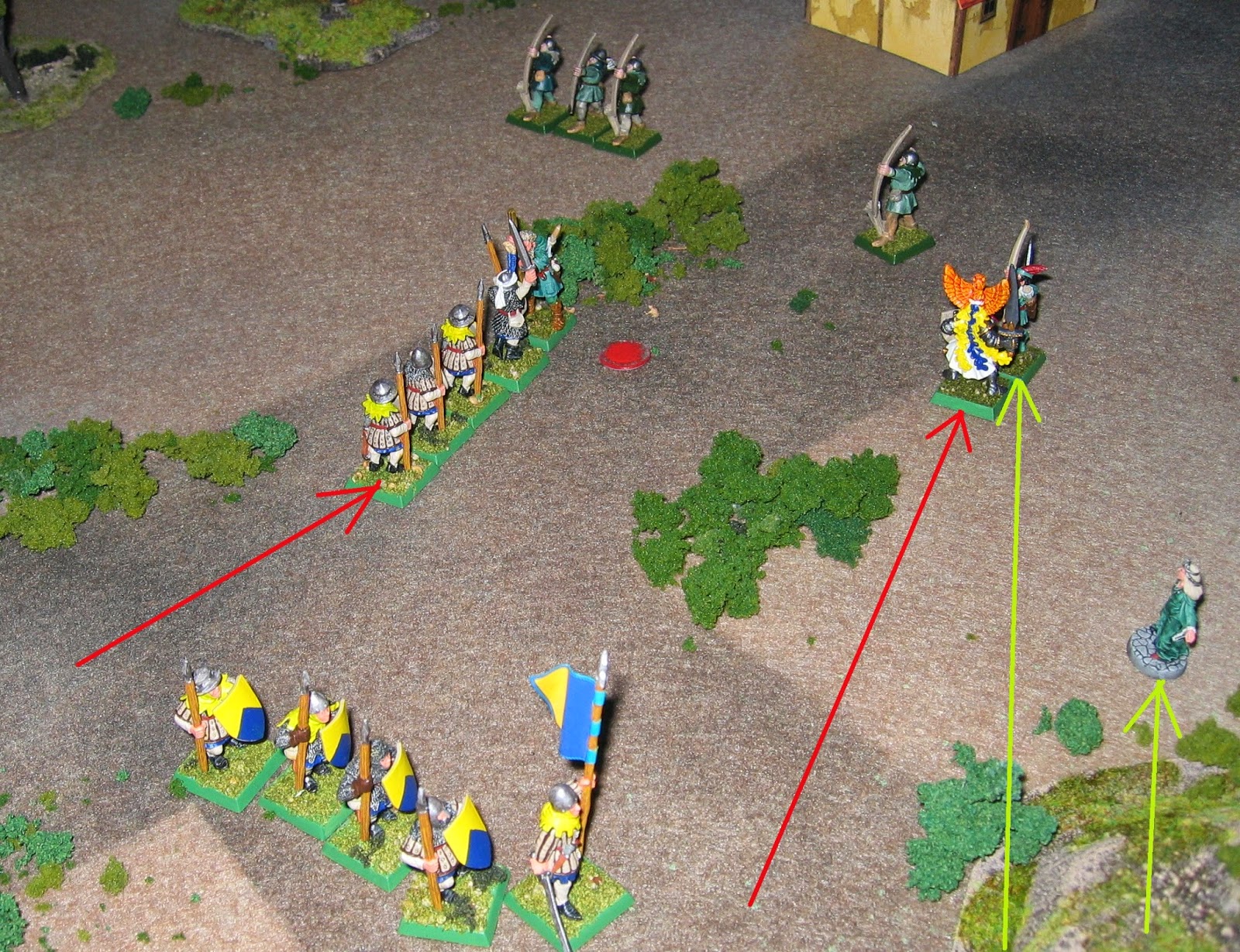 Seeing all the reinforcements coming, Robin and Marion attempted to evade - but Guy was too quick and managed to catch up.  "Coward!  Face me and die!" he shouted at his rival.

A file of soldiers followed the sheriff's orders and engaged Little John in an attempt to isolate and (ultimately) surround him. 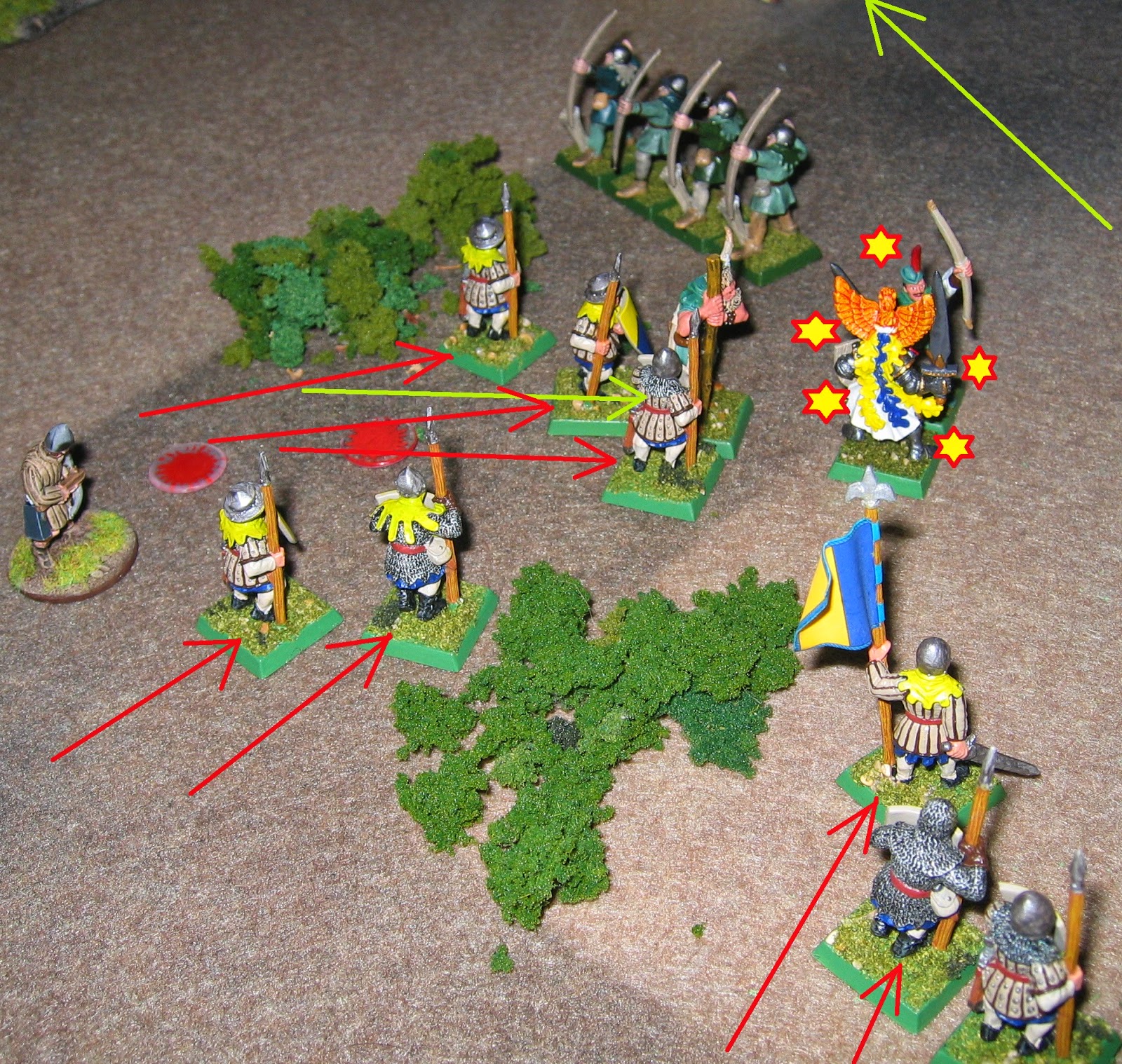 As Marion ran past on her way towards the forest, Robin and Guy fenced each other for several turns.  They were evenly matched; neither could land a telling blow on the other.  Sometimes Guy forced Robin to take a step backwards, whilst on other occasions Robin landed a blow that was only deflected by the knight's armour.

All the time, more men-at-arms were arriving, though they were not yet close enough to intervene on Guy's behalf..  Little John attempted to reach his friend, but was constantly engaged by the sheriff's spearmen. 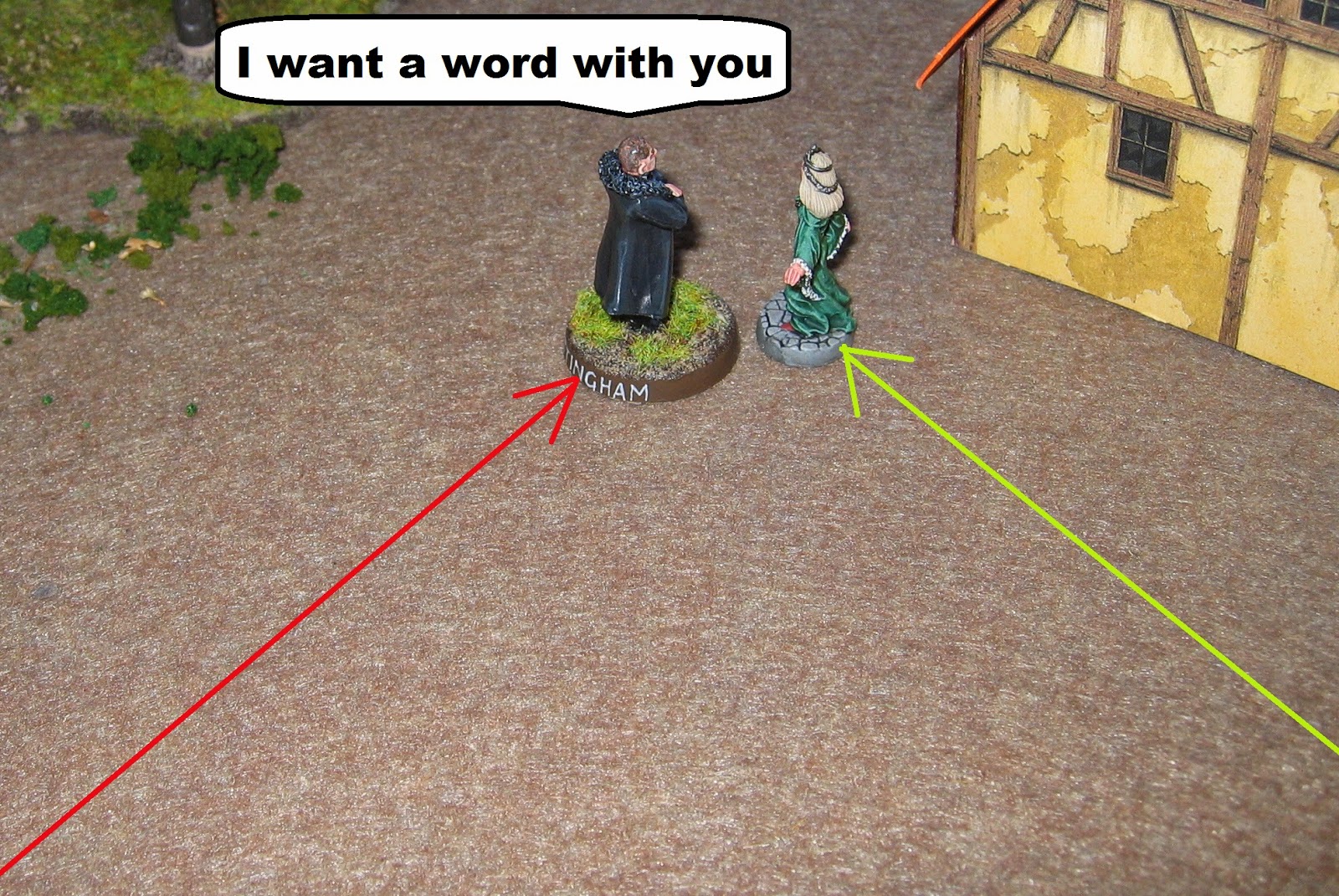 Just short of the forest, the fleeing Maid Marion was intercepted by the Sheriff.  He had been skulking in the background until this point, urging his men forward.  However, when he saw Marion alone in the distance, he caught up and grabbed her by the arm.  "Not so fast, my lady" he said.  "You seem to be running away, but from whom?  What is your part in this affair?" 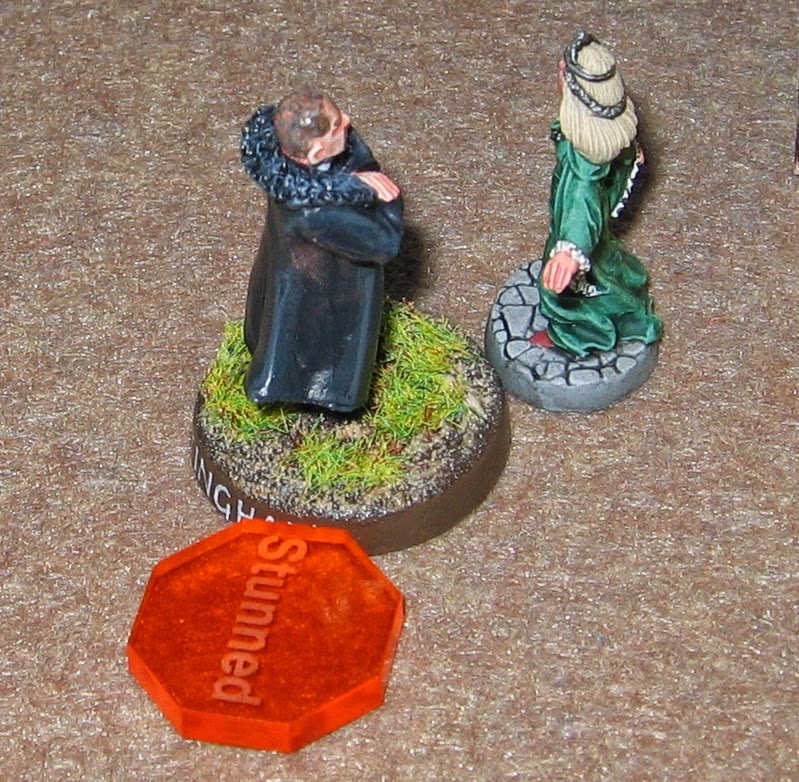 "Of course I'm escaping, you idiot!" she replied.  "They're fighting back there; I don't want to get hurt!"  The sheriff was distracted momentarily, but he recovered quickly.  "No, I think you're assisting the outlaw, Robin Hood!" he returned.  "You're going to spend a good, long spell in a dungeon.  Let's see if that changes your disrespectful tone" (muah ha ha!) 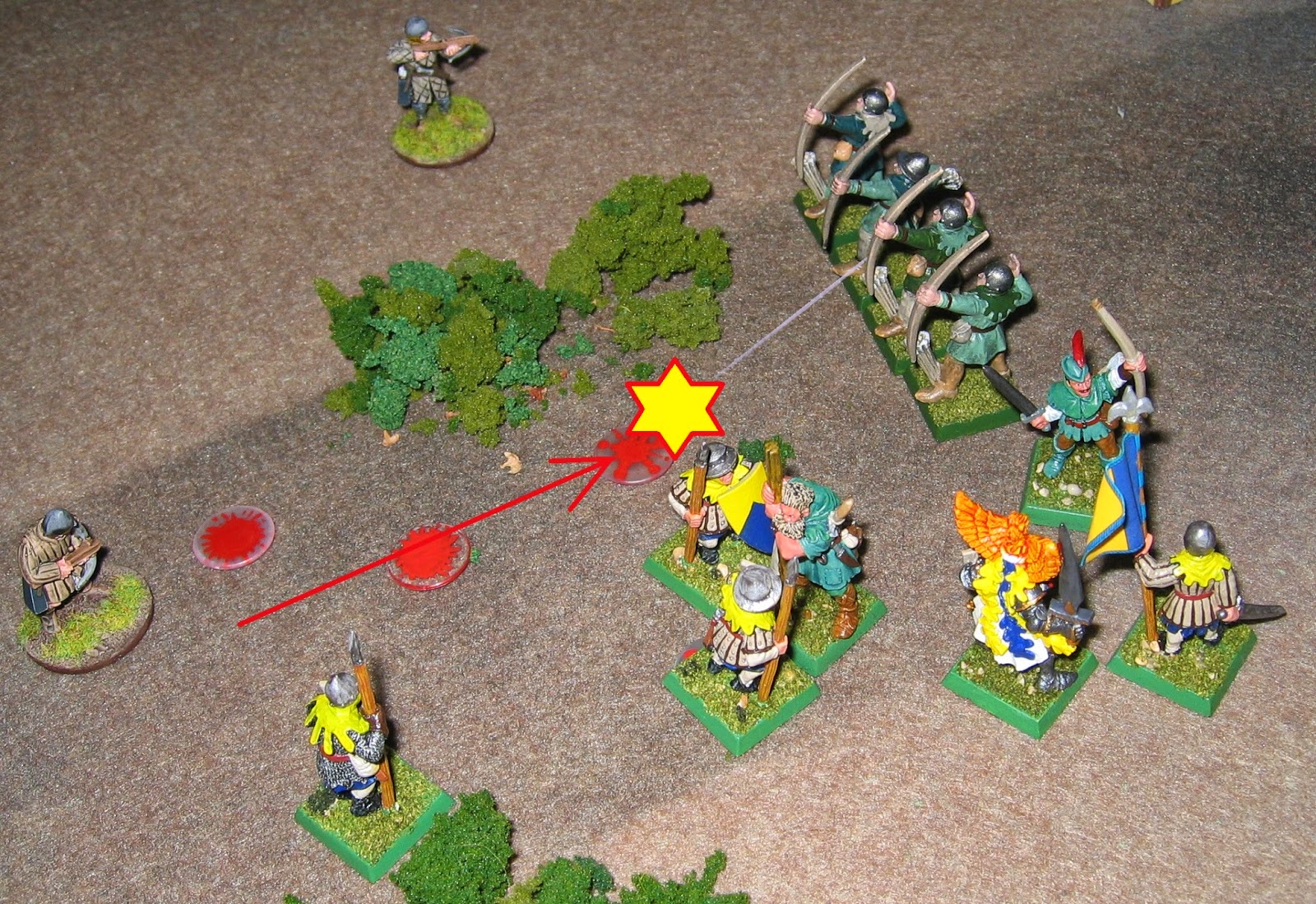 Just as Guy forced Robin backwards again, one of the merry men loosed another arrow and finally achieved success.  He hit a man at arms who was charging towards him and felled the soldier.  Not only that, it was another gruesome kill, which would mean a morale test for all the sheriff's men that were within 'L' distance.  Fortunately, Guy of Gisborne was fearless, which made him immune to such tests - the rabble soldiers weren't so important.

As if the prospect of the men-at-arms running wasn't bad enough, this single casualty took the sheriff's forces to half strength, which would cause a morale test for all the remainder - including Guy.  But hey - he was Q3+, so I wasn't too worried.  3 dice, needing 3+ on at least one of them? 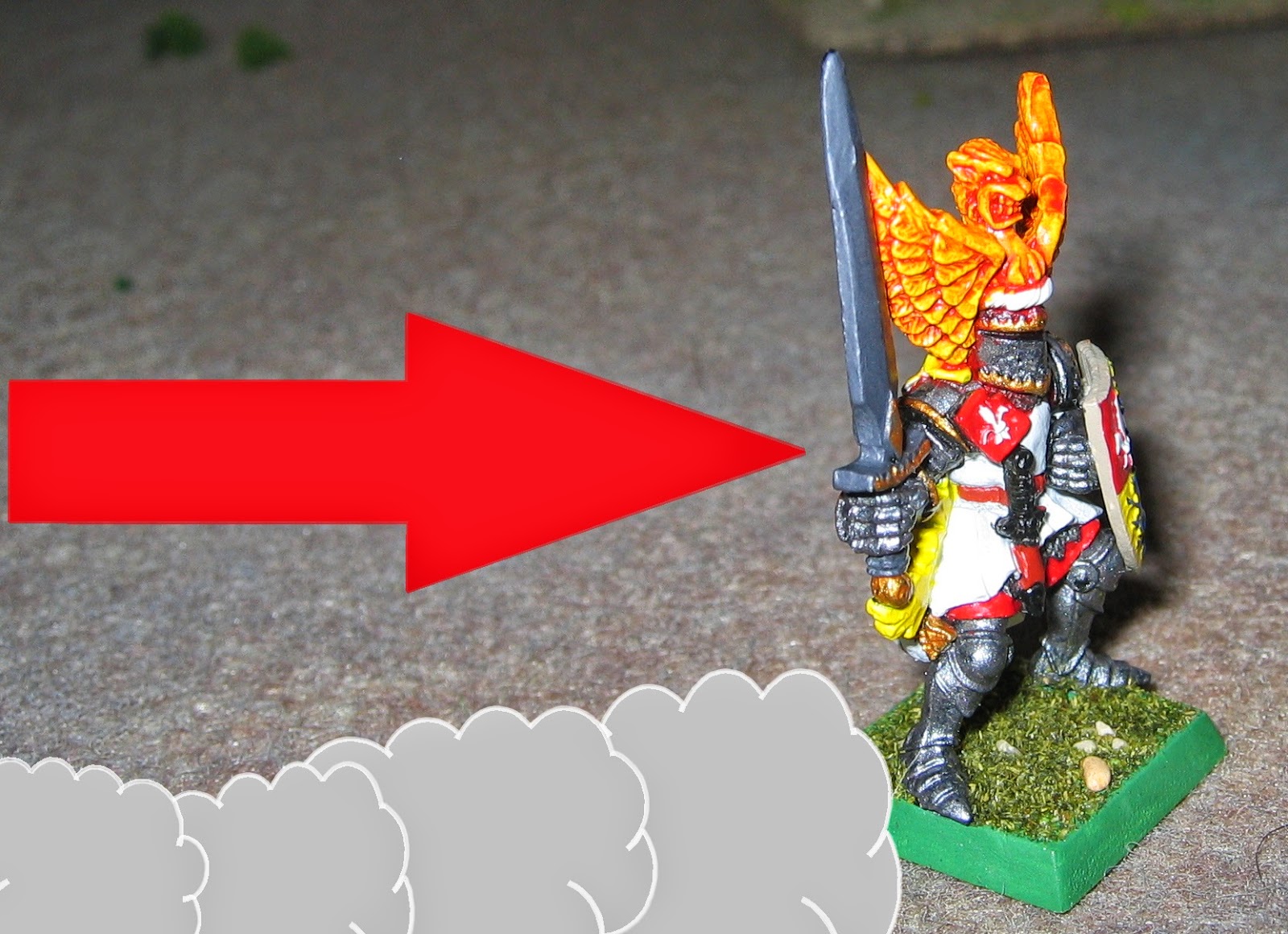 Predictably, I threw the dice for Guy's morale test and got 2, 2, 2.  He panicked and fled so fast that you couldn't see him for dust.  Most of the remaining soldiers also fled, though the few that lingered were no match for the outlaw heroes (and they knew it).

The sheriff was, surprisingly, unaffected by this rout.  Perhaps he was too far away to see the full extent of the disaster, or perhaps he just expected his minions to let him down like this.  Anyway, he decided to retreat voluntarily.  "This isn't over!" he hissed to Marion.  "Enjoy your life with the outlaws while you can, for it won't be long before they are all destroyed and you can then rot in a dungeon forever!"  With these parting words, he ran off before the triumphant Robin and his men could reach him.

A major victory for the outlaws.  Not only did Robin and Marion escape, but none of the merry men were hurt!  That is to say, none were killed, though both Robin and Marion must have had scrapes, cuts and bruises from their adventures.

As the player of the sheriff's forces, my main consolation is that the evil man didn't kill any of his own men during this game.  I think that's the first time that he hasn't knifed at least one underling who failed him!

So, Song of Blades and Heroes delivers again!  There were some moments of high drama and the game never felt hopeless for either side right up to the end.  Very cinematic.

Having said that, I'm thinking of removing the rabble characteristic from the sheriff's men-at-arms.  It means that he'd have fewer of them, but they wouldn't be quite such pushovers!