I'm really keen on Congo (the new "African Adventure" wargames rules from Studio Tomahawk).  After all, the authors have a fine pedigree, having already written the very popular SAGA and Muskets and Tomahawks.  In addition, the European exploration of the Dark Continent is a subject that I have found fascinating since my university years, when I read large numbers of books by H. Rider Haggard and umpired long-running games of the old Source of the Nile board game.

To scratch this itch, at the recent Claymore show I bought the newly-published Congo rules as well as a pack of assorted natives and another of Askaris, all Foundry miniatures.  I've now painted up many of the natives and it's these that I'll be showing below.  They will add to my existing North Star "jungle cannibals" to form the basis of a Forest Tribes force, though I haven't quite worked out how that will be organised yet.

I've got a fair selection of tribal characters here, all of whom are easily recognisable as coming from Foundry's "Warrior Characters - DA064" pack.  There's a slight problem with that pack, though.  Since each tribe would probably have been distinguished from its neighbours by having its own hair style or type of shield, I can only suppose that these guys are all from different tribes.  Well, I won't let that bother me too much (and who knows, I now have the starters for 5 or 6 different tribes I could collect!)

Here is the tribal chieftain.  This time, the figure is from North Star, though his advisor is another Foundry casting.  The chief is dressed in a somewhat unlikely "Hollywood Cannibal" style, with a grass skirt and a bone through his nose.  I don't think this would have been seen anywhere in 19th century Africa!

It's also fairly obvious that the chief has somewhat paler skin than the other figures I am showing today.  I started to paint him many weeks ago and I must have used a different recipe for the dark wash that was applied over the basic skin colour.  Oh, well - I'm not going to repaint him.  I've got a spare Foundry chieftain that I can paint up if this guy's costume and skin colour start to annoy me too much. 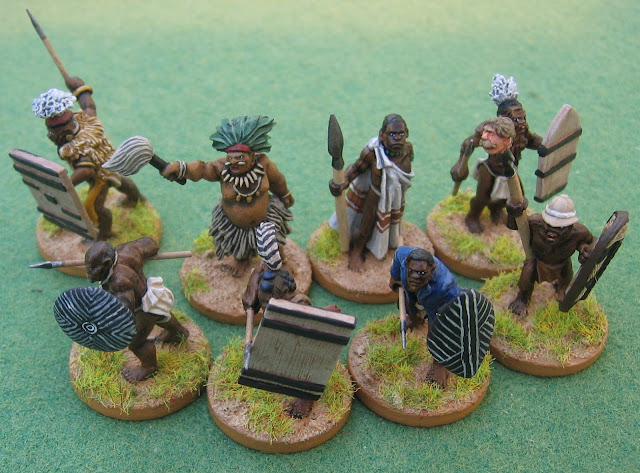 This adds another 8 figures to my Forest Tribe; a.  Along with the 15 North Star figures I painted earlier this year that makes 23.  I've still got a few more models to paint, but these are mostly auxiliaries or decoration (the war drum, the chieftain's favourite wife and daughter, the witch doctor...).  A basic "column" for Congo would probably need about 30-35 models, so I'm still a little short.  Now let's see - should I go for archers, tribal muskets, fierce cannibals or hordes of young warriors?
Posted by Colgar6 at 20:12