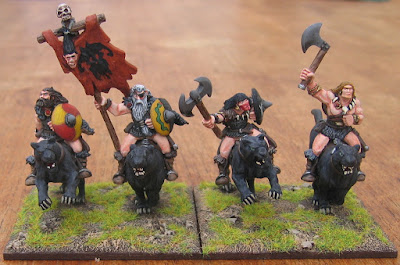 I've been working on a Barbarian army for the Hordes of the Things rules for quite some time now.  Here's the timeline so far:
This is all very well, but I had always intended that I would expand the barbarian army to 48AP or 72AP (i.e. 2 or even 3 Hordes of the Things armies) so that they could be used in really big battles.  I will need many more bases, of course - but a larger force gives scope for something beyond the basic heroes/warband/shooters mix that I have right now.  I'll start with some cavalry! 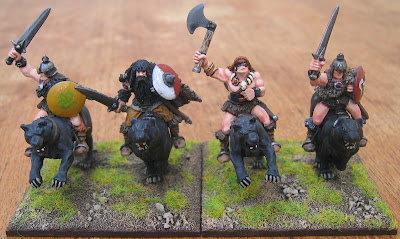 As mentioned above, I had acquired 10 giant panther riding animals as part of a Mantic "crazy box" some years ago.  These seemed like a reasonable starting point for my cavalry; I could make 5 elements from these if I followed my usual HotT convention of 2 mounts per base.  But I would need to find riders from somewhere...

Eventually, after much dithering, in December 2016 I asked for advice on The Miniatures Page.  There were a number of ideas as to where 28mm barbarian cavalry could be obtained, but the most useful one was a suggestion that Gary Tate of Forlorn Hope Games might be prepared to sell separate riders (i.e. without the horses, which I didn't need and which would add to the cost). 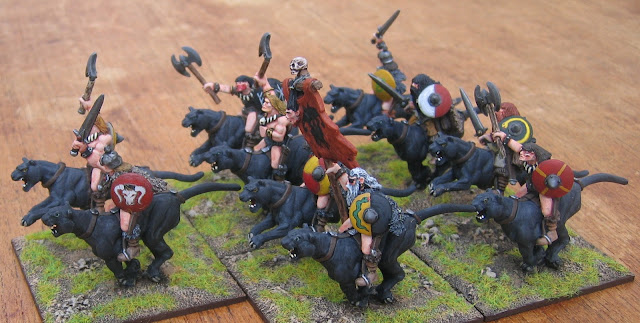 After several exchanges of emails between Gary and myself, I had my 10 figures.  I'm not entirely sure of the provenance of these models, but they have the look of one of the old Grenadier ranges to me.  It doesn't really matter too much anyway; the main point is that these are nicely sculpted, appropriately detailed and well cast figures.

I think there were 7 distinct poses in this set, but I cannot remember for certain.  Many of the figures came in 2 parts with legs and body separate.  This allowed some of the identical casts to be positioned differently, so hopefully the repetition isn't too obvious. 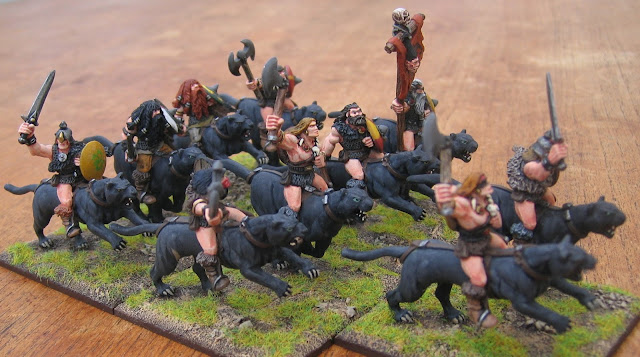 The riders were all I had hoped they might be.  However, the panthers are a little bit of a disappointment, to be honest.  They have only 2 poses, one of which has a much longer body than the other.  In addition, they're cast in Mantic's "restic" material, which may be cheap but is both soft in detail and hard to clean up when the pieces have flash on them.

I did need to carve away some of the mounts' harness to allow the riders to sit on their mounts, but apart from that they seem to fit quite well.  I didn't bother trying to create saddles for them; it would have been a lot of work and would probably only be noticed by the purists.  Anyway, who says that giant pumas need a saddle to be ridden in comfort?  Or maybe the barbarians are so tough and inured to pain that it's not an issue for them...

I haven't quite finished these models. Firstly, they're not sealed yet.  Secondly, those of you with particularly sharp eyes or good memories will have noticed that I like to label my HotT elements so that we can tell at a glance to which army they belong and which type of element they represent.  The former is easy (they're Barbarians), but the latter has me wondering: should they be Riders or Knights?  Here are the rulebook definitions:
[Yes, I know that technically they could also be classed as Beasts, but that doesn't really fit my idea for this army.  For now, I'd prefer to discount that idea.]

My barbarian cavalry don't appear to have the armour that is normal for a knight, though a frenzied, berserk attack with a disregard for injury could possibly be classed as "magical" protection.  On the other hand, assuming that the panthers join in the attack then they don't quite fit the definition of Riders either ("depending on their own weapons").  So, what should it be?  Any opinions?
Posted by Colgar6 at 21:39