Scenario 3 in the "Perilous Island" campaign book for Pulp Alley is set in a large customs warehouse, full of row upon row of crates.  The leagues are searching for a package that may contain clues to the location of Lord Darrow (the missing archaeologist), so they break in to the warehouse at night and hunt for the item, all the while avoiding (or overpowering!) the guards and each other.

Of course, I don't have a model of a large warehouse filled with shipping crates.  Instead, I decided to set the game in one of the Snake Cult's (see previous "Pulp" posts) outposts.  The cult was last seen being fought to a no-score draw in Perilous Island 2: Final Flight.  It's not unreasonable that while they and the Safari's characters are languishing in Lumbasa jail, the other two leagues in the campaign should raid their base! 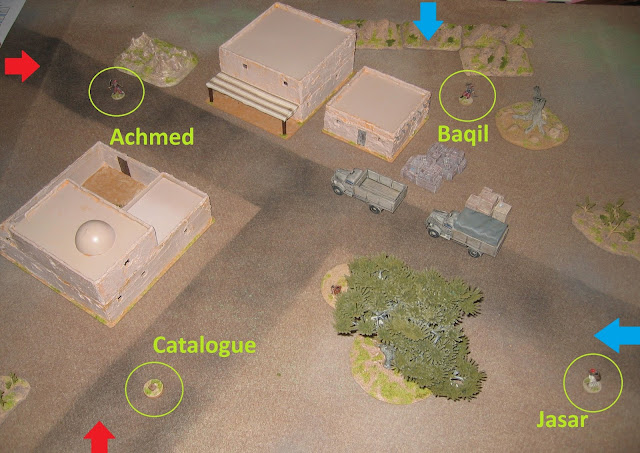 Somewhere in east or north Africa, the snake cult has complete control of a small village.  They have a big operation under way; the hamlet is full of crates of supplies and trucks - but for now there aren't too many cultists around.
The infiltrating leagues have decided to approach in the middle of the night, so visibility is reduced to 12".

Unwittingly, it seems, the cult actually have Lord Darrow's box [major plot point] hidden amongst their piles of goods.  There are also 4 minor plot points, any one of which might be able to reveal this important item:
To find the major item, a character must take any one of the 4 minor points into the centre of the board and query them [using finesse] to reveal the box's location.  It is then placed on the table close by and may be attempted as a normal, major plot point.

We decided on the following effects:


As mentioned before, the Snake Cult is providing "guest stars" in the form of the watchmen and the janitor.  Officially the Cult isn't involved though; the fate of these extras will not alter the league's reputation, experience or other attributes in the wider campaign.

In the first turn of the game, all four minor plot points were attempted: 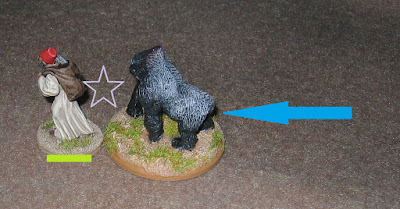 Koko crept up behind Jasar in the dark.  The first thing the poor janitor knew of the ape's presence was when a large, dark arm wrapped itself around him.  Jasar tried to struggle [the plot challenge was against might], but he didn't have a chance of escaping.  1-0 to the Jungle Alliance! 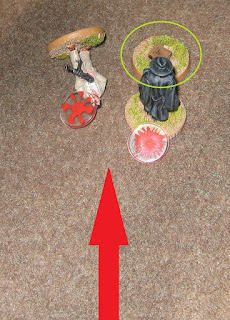 Johann and Herr Stengel approached from the south.  In a staggering display of bad luck, Johann tripped over something unexpected in the road and knocked himself out.  Herr Stengel then groped about in the dark to see what was there, but ended up stubbing his toe badly against a large account book [in other words, both of them failed the plot point challenge for the inventory rather badly]. 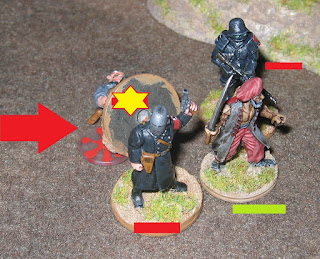 In the east, night watchman Achmed took his job seriously.  When approached, he fought like a dervish and immediately felled Ernst.  It took all their energy for Stahl Helm and Panzerbot 5 to avoid the guard's flashing blade [another set of terrible dice rolls by the Nazis!].

Meanwhile, Tarzan had no trouble at all in subduing the other watchman, Baqil.  2-0 to the Jungle Alliance! 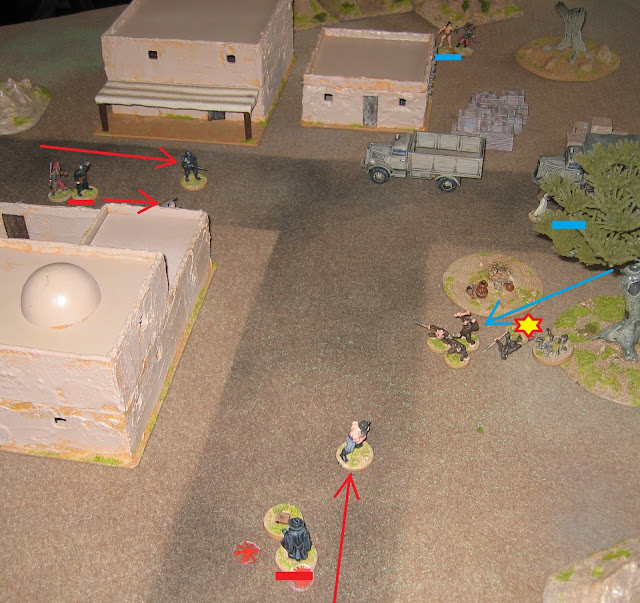 Stahl Helm finally convinced Achmed to stop waving sharp objects around [so that's now 2-1 in favour of the Jungle Alliance], but Herr Stengel just couldn't find the inventory in the darkness.  Life was about to become a whole lot more chaotic for the spectacled Nazi, as the whole troop of monkeys made a beeline for him - they could hear the sounds of him scrabbling about on the road and thought that this needed to be investigated!

It wasn't all good for Tarzan's followers, though: Caesar was bitten by a snake as the monkeys passed near the well and Kurt arrived to protect his Nazi boss, having been delayed by a random event. 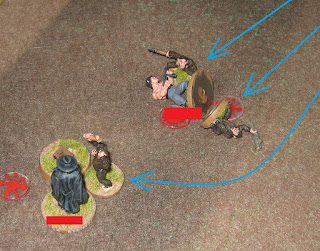 Within moments, the monkeys were all over the Germans, hooting, throwing things and generally getting in the way.  They weren't much good at brawling, but the little creatures had a reasonable Dodge ability and it was hard to prevent them from making a nuisance of themselves [Importantly, their presence prevented Herr Stengel from attempting to complete the Inventory plot point, much to his frustration]. 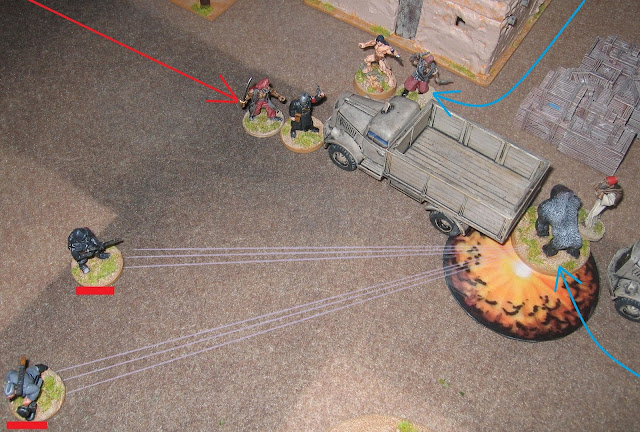 At the crossroads, all the remaining characters stumbled into each other at the same time.  Tarzan and his captive watchman turned a corner and came face to face with Stahl Helm and his captive.  Awkward...

Meanwhile, the Nazi goons attempted to pin down Koko and the janitor with machine gun fire and grenades.  This just served to annoy the great ape! 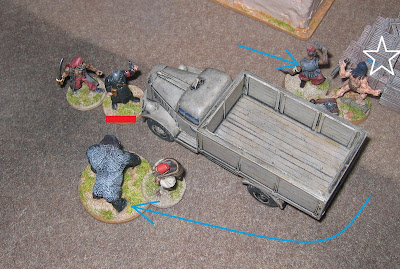 In a brief lull, Koko seized his chance to reveal the location of the final plot point.  He dragged the janitor into the middle of the crossroads, held him up and shook him until the terrified man pointed towards the stack of crates and squeaked "it's over there!" [Koko's finesse skill was not great, but it turned out to be enough (just!) for this task].

Quick as a flash, Tarzan jumped onto the baggage and after throwing a few boxes aside he came up with a package addressed to Lord Darrow.  [As in a number of previous games, the random challenge for the major plot point was against might, which Tarzan has in spades!  He does seem phenomenally lucky in this respect] 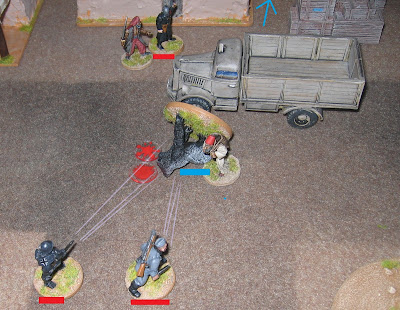 Having reloaded, Ernst and Panzerbot 5 blazed away at the gorilla.  Bullet after bullet hit Koko; he fell, stood up again and then collapsed once more, not to recover.  As the ape's grasp weakened, Jasar (the janitor) decided that he was needed somewhere else; he fled before any of the Nazis could corner him.

On the other size of the truck, Stahl Helm levelled his pistol and shot at Tarzan, but he missed.  Thus alerted, the jungle man dodged around the corner of the building and ran away with his prize into the night. 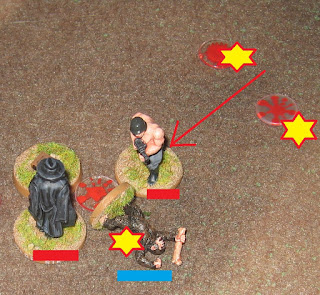 Back down the road, the monkeys finally made a mistake and Kurt, the Nazi muscle man, managed to grab the pair that were taunting him and bash their heads together.  He then stepped into the other brawl and rescued Herr Stengel from the attentions of the third creature - but it was too late.  Some time during the fight, the inventory must have been kicked away and was now lost in the darkness.

With signs that more cultists were coming to investigate the fracas, the Nazis left the village, not particularly well-rewarded for their efforts.

That was another excellent game, though a bit one-sided!  Final score:
I don't make a habit of commenting on poor dice rolling, as normally such effects are more in the mind of the player than in any scientific reality.  However in this game, the Nazis really did have a tough time.  In particular, Herr Stengel's repeated attempts to pick up a book in the dark were somewhat comical.  Perhaps he broke his glasses when he tripped initially and couldn't see properly thereafter?

It could all have gone very differently, of course.  If Koko hadn't managed to make the janitor reveal the location of the final prize then there would have been an almighty fight in the centre of the village.  Both sets of potential combatants would have been fairly evenly matched, I think: Tarzan and Koko would be better in a brawl, but the Nazis had all the guns...