I'm on something of a Dreadball roll at the moment, trying to finish painting all the models I have.  Still to go are 3 of my 13 (?) teams:
The end is in sight, at least until/unless I buy more stuff (that commentary-box/event-card-holder looks very nice, though rather pricey).  To give you an idea of my progress, in the last 3 or 4 weeks I have finished two teams and one squad of cheerleaders.  Here they are:

The Ukomo Avalanchers (note: that's Mantic's name for the team, not mine.  I'll give my lot a different name when I can think of one.  So far, my mind is a blank...) are of the Teraton species.  That is to say, they are intelligent, bipedal turtles who can teleport short distances.  Obviously this gives them certain tactical options that other teams do not have!

Teratons are somewhat slow and clumsy, so the team doesn't have any specialised ball handlers ("strikers").  Instead, the team consists of general purpose "jacks" (above)...

...and specialised tacklers ("guards").  I like these models quite a bit, but it is difficult to tell the jacks from the guards.  If you examine the figures carefully and you know what you are looking for then it is possible to distinguish them: the jacks have a ball-launching "Dreadball glove" on their right arms, whereas the guards do not.

However, there's a simpler way that doesn't require an understanding of subtly-different pieces of equipment: the guards are more heavily armoured.  The guards have armoured boots and (most importantly, for recognition purposes) armoured tails, whereas the jacks do not.

In hindsight, I could perhaps have painted more visible marks to distinguish the two classes of player!  However, the effort required to edge all that armour plate was significant and I'm not going to revisit these models with a paintbrush.

The Chromium Chargers are robots that can change their role during a game.  Each robot can play as a striker, a jack or a guard, though it takes time to alter from one form to another.  As a consequence of this, all the team models look quite alike.  There are subtle differences if you know what to look for, but having just encountered exactly this problem with my Teratons (above) I decided to use colour to make the roles more obvious. 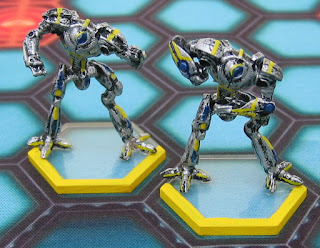 Consequently, the strikers for the Shining Sentinels have yellow flashes and accents... 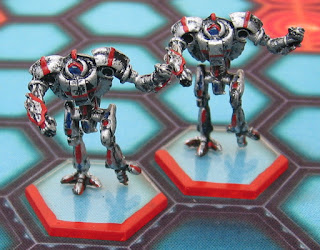 ...whilst their guards are marked with red. 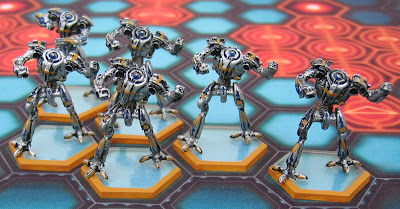 Finally, the jacks are highlighted with orange.  Presumably, when a robot changes role it has mechanisms to alter the colour of its accents as well as extruding extra armour, forming a ball-handling "glove" or whatever other physical aspects it changes.

I'm quite pleased with the numbering on the robots' backs.  The digital numerals are not exactly high tech, but they were somewhat easier to paint than many of the alternatives might have been.

I now have 2 sets of cheerleaders for Dreadball.  This squad of 4 is one I painted up some time ago, but I don't think I've shown it before.  Since I will be describing the other, newly-finished squad below, I thought it would be worth comparing with these. 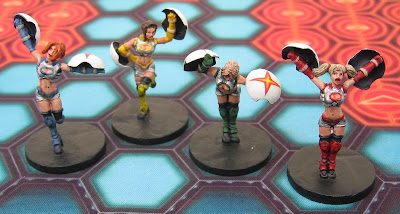 "The Nice Girls" is my temporary name for this group of four cheerleaders, until I come up with something better.  These plastic/resin models depict four wholesome young women dressed in short shorts and wearing a form of halter top.

Each cheerleader has 2 large "shields", one attached to each arm.  I imagine these to be high tech devices, probably with LED or similar technology that would allow them to change what they display.  The possibilities are enormous; they could spell out words, show fireworks or other patterns, or have "cascades" where a logo or message moves from one shield to the next along the line.

Of course, my imagination is rather greater than my ability to paint any of these concepts, so I coloured them all white and added a simple "star" decal of my own design. 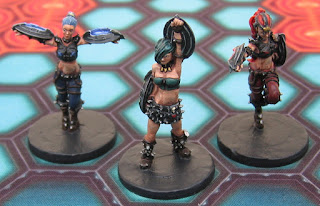 Mantic produce another set of cheerleaders; these are definitely not the nice "girl next door" sort.  They're dressed in a variety of spikey, probably leather gear and one of them even has a knife down the side of one boot. 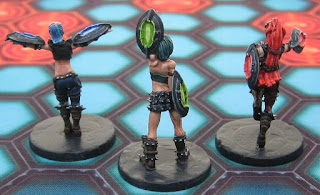 These cheerleaders also have devices on each arm to help with their work.  In this case, they look like cast iron ovals, though they're probably make of lightweight composites instead.  In the centre of each oval is a strong, brightly-coloured light.  I guess that these could be strobe lights, thus allowing the Punkettes to produce a form of mini-disco within their routine.

As with the "nice girls", I've decided to use a different base colour for each model.  Obviously, since there are only 3 figures in this set there is no "yellow" variant.

Well, there you have it: more Dreadball figures.  If these aren't your thing then don't worry - I'll be onto something different very soon.  My interests are many and varied...
Posted by Colgar6 at 14:25