I know how much my readers like eye candy, so here's a selection of models that I've completed fairly recently.  There's nothing particularly common to them, other than they're all 28mm figures.


First up is Uguah, the fictional witch doctor who comes with the "Mungo Mah Lobeh" expansion book for "Congo".  He's a seemingly cruel old man but a powerful sorcerer; he provides the main opposition for Mary Kingsley, the explorer upon whose exploits the campaign is based.

Despite his near-naked state, the model is covered with details.  I just wish that they were more visible, as his hunched pose hides much of the work, including the grotesque face that he is pulling! 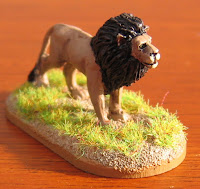 Next up is a fairly generic lion, also from North Star.  I can never seem to find my existing lion miniature when I need him, so having an extra should help.

Finally (in this section), I have some dugout canoes.  These, like so many of my models, were undercoated many moons ago but only completed recently.  I've added some scratch-built paddles and some baskets (one empty, one containing fish) as I felt the canoes were a bit bare without this.


Here are two more star players for my Dreadball teams:


In our first game of Paleo Diet, all of the hunters were armed with spears.  That's all very well, but perhaps a bit dull.  To fix this, I bought some Lucid Eye Neanderthals to add to the tribe.  Mind you, they're from a different manufacturer and are painted in a different style from my existing Neanderthals so I don't yet know if they'll fit in very well.

One model had a club, so that was fine.  The other two both had spears, though.  I converted one of them into a fire-wielder by cutting down the spear and adding some flame from green stuff.  He's got a flint knife as well, so he'll be all right...

I recently stumbled across a Facebook group called Void 1.1 Nexus (not sure if membership is required to see anything much), which is full of enthusiasts for this old game.  They're running a painting competition just now to encourage people to complete old (or new) figures that may be lying around.

Well, I have a very large number of Void 1.1 miniatures lying around, mostly still in packets.  I thought I'd get some out and paint them, without necessarily entering the competition.  Here is the first batch to be finished (and yes, I was persuaded to enter them in the competition after all): 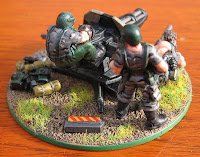 Well, it's another fairly mixed collection of painted figures; I hope you like them!  Not much more to be said, really...
Posted by Colgar6 at 20:52