Last Thursday's club game was Super Dungeon Explore.  This won't be a blow-by-blow account, but rather an overview.  It was a very close game indeed... 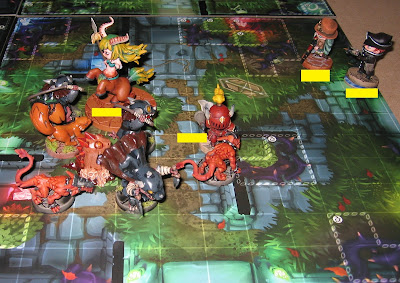 So, the Questing Knight (in red armour) and the Thundervale Huntress (the centaur) tore through a number of kobolds and their pet hounds.  Initially, Princess Emerald (steampunk sniper) and the Royal Warden (black trenchcoat and hat) just stood and watched.  Of course I, as the dungeon consul, just spawned new monsters to replace these losses; I didn't care about such losses 😁. 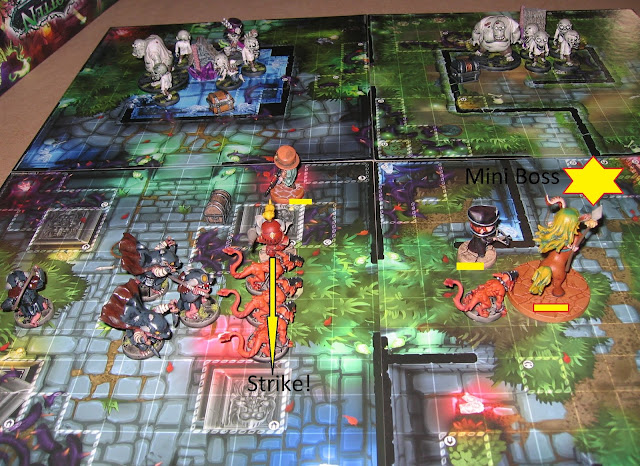 After a while, the heroes seemed to realise that they weren't getting very far.  They switched to prioritising spawn points instead of destroying monsters.  This worked much better and they were working through the second tile when my mini-boss spawned.  Sadly, he was so ineffectual and was dispatched so quickly that I don't even have a picture of him; he just wasn't on the board for long enough... 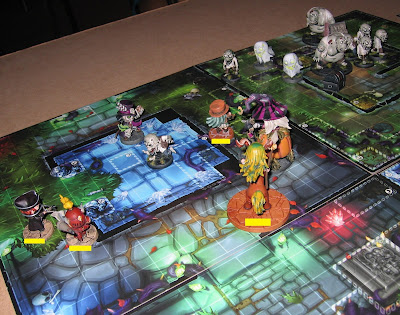 The third and fourth tiles had some very well-entrenched zombies protecting their spawn points.  Nevertheless, the heroes did manage to destroy one of these before the arrival of the big boss (the Witch Queen, on her pumpkin carriage). 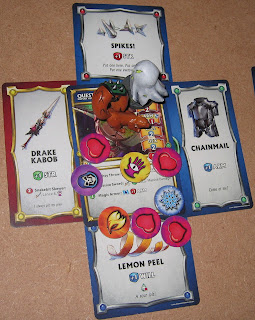 Now it took me a while to figure out how to use the Witch Queen effectively (call me slow if you like...).  She's not much good in a melee, can't heal very well - and the heroes were pretty well tooled up by this time.  However, she can throw curses like there's no tomorrow!

Above is a picture of the Questing Knight shortly before he expired: he is badly wounded and on fire, has hex, bane and ice curses and also is infested by a rabid squirrel and a ghost - none of which are particularly hindered by his considerable strength and armour.  He's not in a good way... 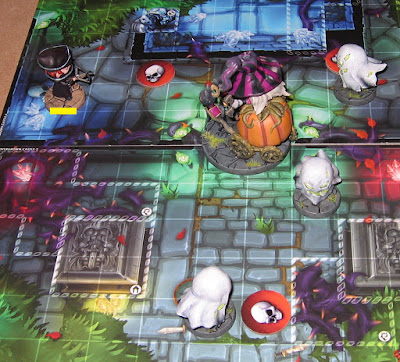 Last to die was the Royal Warden - though not before the Witch Queen had been reduced to 2 health left (from a starting value of 8).  One more turn might well have been enough for the warden to inflict 2 damage, so it is quite possible that the heroes could have won this game.  But they didn't...

We were playing the fan-published Lootimeter Mode rules, rather than one of the two official modes that come as part of the game, though we used 20 cards in each countdown deck rather than 16 .  I think I prefer this mode greatly; Lootimeter Mode provides some very necessary time limits and therefore imparts a real sense of urgency.  The heroes need to stick to their plan; they can't afford to deviate!

Not having destroyed the fourth spawn point made a huge difference, as it allowed the Witch Queen to activate an additional time every move.  In effect, she had 2 turns for each one in which the heroes moved; this is a big multiplier.  Heroes, you really need to kill those spawn points!