The Sword Dance has been a staple part of Highland Dancing competitions for many decades.  Although these days it's more likely to be performed by young girls, the origins of this dance are as a martial exercise - to show off the fitness, strength and dexterity of a warrior.

So why am I telling you this?  The audience for this blog are (I imagine) primarily wargamers and model makers.  Well, I had a hankering to include some character figure models in my Dark Age Scots warband; a sword dancer seemed appropriate.  Also, it's a way of showing an interest in my daughter's hobby 🙂. 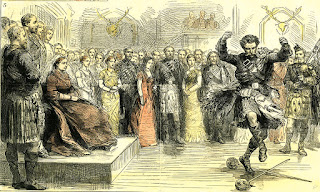 Actually, there are a number of issues with my idea.  It is quite possibly anachronistic and out of place.  Here are some of the things that I have considered: 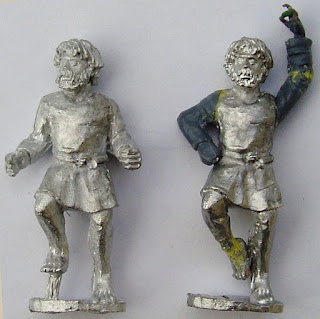 Ideally, I needed to start with a figure that had only one foot on the ground - preferably on tiptoes.  Fortunately, one of Crusader Miniatures "Scots skirmishers" had exactly this posture.  So, a fairly straightforward conversion: 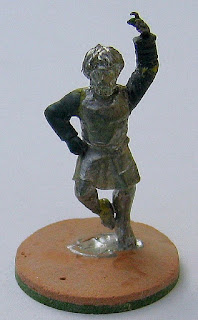 Firstly, I glued the model to a suitable base, though somewhat off centre.  The base was levelled up with brown wood filler. 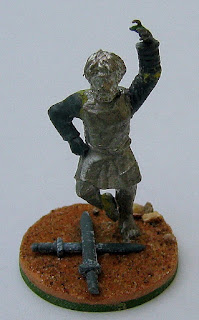 The next step was to texture the base by adding some sand to it.  I added a few small rocks to break up the monotony, though these are around the edges rather than in the middle.  After all, I imagine that my dancer has selected a reasonably flat, open area for his dance so as not to trip over any obstacles.

Two plastic swords were then stuck to the base, in the classic "X" shape.  I didn't have any bare swords in my bits box; so these swords had to be constructed by taking the blade from a "hand-with-sword" piece and marrying it to a hilt from a "sword-in-scabbard" part. 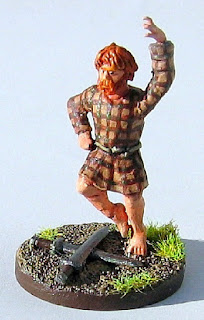 Painting this model was easy; he doesn't have much in the way of detail.  So: undercoat, flesh, hair, tunic. The tunic is easily the most complex bit of painting; my dancer wears a "pseudo tartan" tunic.  I've described my technique for these before, so I won't repeat it again. 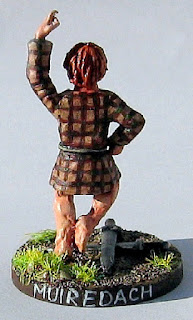 By custom, figures in my SAGA warbands have names.  I called the dancer "Muiredach".

I had the idea for this model a very long time ago, but it took a long time to get around to making it.  When I finally began, it was a reasonably easy conversion that was built and painted quickly; I'm pleased with the result.  Of course, now I really need a piper or other musician to accompany him...

History is full of examples of warriors trying to intimidate or insult their enemies just before a fight begins.  Or maybe they are just trying to bolster their own courage?  Either way, there aren't as many models of these as I would like - but they're often not hard to convert.  Pretty much any army from any time period could have such figures.  As well as the sword dance or other weapons display, here are some more ideas:
So, let's see your insulting or showing-off figures!