After a night's rest, the bridge crew returned to the same spot of the planet for another day's hunting.  "I want those targ" exclaimed captain Mor'tah.  "Nobody is to scare them off this time!" 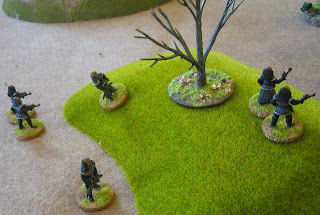 Once again, the captain heard noises on the far side of "Dead Tree Hill".  However, when he and Sira climbed to the top to investigate, there was nothing there.  Mor'tah shook his head in bewilderment, but said nothing.  Although his crew were very loyal, it wouldn't do to show any weakness in front of them by admitting that he was getting jumpy. 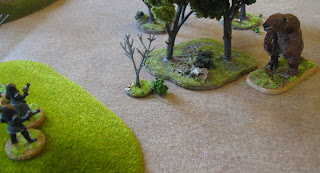 "Hah, I thought so!" he shouted as a huge creature lurched slowly from the trees just ahead of him.  Sira just gaped, stunned at the size of the animal, but Mor'tah was quick to react.  He took careful aim and fired once, hitting the creature directly in the brain.  With a tremendous crash of breaking branches, it collapsed to the ground and expired. 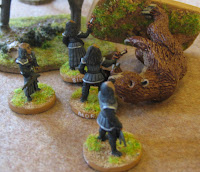 The crew clustered round and gazed at the corpse.  "Captain, congratulations."  "That's...very impressive!"  "Look at the size of that beast!"  "Good shot!"
Only Sira, the medical officer was muted in her praise.  She had her suspicions that despite its fearsome appearance, the anatomy of the creature suggested it to be a slow-moving and dim-witted herbivore.  It would only be dangerous if you got close enough for it to stand on you accidentally.  However, she kept her thoughts to herself - now wasn't the right time.
Mor'tah thumbed his communicator.  "Transporter chief, I have a job for you!"  He turned to the rest of the hunters.  "I think we'll get a big enough pelt from this to cover the entire command deck with fur rugs!"

Once the first kill of the day had been dealt with, the party advanced in a loose line towards the river.  Since there had been animals there yesterday, perhaps they would have the same luck today?

As they advanced, Ensign Leyra wandered off on the flank.  The other Klingons hadn't noticed how far she had gone from the rest of them, but they weren't the only ones who were watching.

Peering out of the bushes at the river's edge, a huge bird waited for the moment when Leyra's back was turned.

Without making a sound, it sprinted from its hiding place and caught the young officer by surprise.  She was felled before even being aware of its presence. 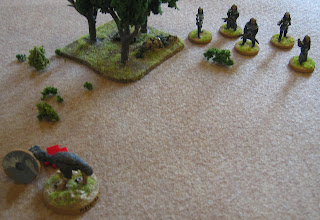 Her comrades saw all that happened, but were too far away to intervene during the initial attack.  However when the bird paused to adjust the grip of its enormous foot, the other Klingons opened fire with everything they had.  Bolt after bolt hit the bird, leaving it as a smoking ruin of a corpse. [Incredibly, 9 out of 10 shots fired were hits.  Even given the size difference (Leyra: size 1, bird: size 4) I would have expected some incoming fire to hit the unfortunate ensign - but no, she was unscathed and the bird took a pounding!]

Amazingly as the hunters ran up to the corpse, Leyra was clearly conscious.  Indeed, she was trying to struggle out from beneath the bird's body, more embarrassed and angry than hurt [that 'resilient' attribute was handy!].  She had barely a scratch; just a small trickle of blood flowed from her shoulder.
"Right, back to the ship, everyone!" ordered Mor'tah.  "Leyra, you will report directly to sickbay".
"But captain!  It's just a scratch - I'm OK really."
"No arguments!  I want a proper checkup done.  And let's all think about what just happened.  P'rang - beam us up!"

On the 3rd day of their holiday, the captain ordered Leyra to stay on board the P'Rang and catch up on some paperwork.  The rest of the hunters left the sullen ensign and returned to Prehistorica for some more trophies. 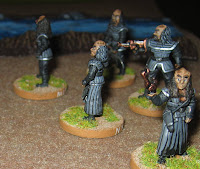 This time, they decided to start a bit closer to the river and work their way back.  Perhaps this would reduce the risk of ambushes from that direction? 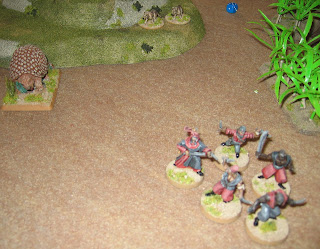 Caprain Mor'tah, Vagh and N'Kara were a little way ahead of the other two when they turned a corner in the river and came across a strange sight.  A huge beast with a domed shell was being pursued by 2 dog-like animals.  These in turn appeared to be associated with a small group of people who had almost bumped into the Klingons [it's not often that 3 PEFs are so close together and none are resolved as "nothing there"].

The three Klingons approached the strangers.  "Tell them to leave.  This is our hunting ground" hissed N'Kara to her captain.
Mor'tah called out "Who are you?  What are you doing here?"
"Kion vi faras?" responded the strangers' leader.  "Ĉu vi komprenas?"
"I don't think our automatic translators are working on this dialect" muttered Mor'tah.  He paused and thought for a moment.  "Klingons.  We are Klingon" he said, as slowly and clearly as he could.

The strangers' leader had obviously lost patience.  He reached for his gun... 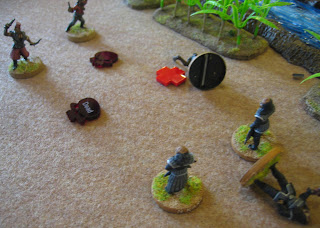 ...but this was a language that the Klingon captain understood.  As quick as a flash, Mor'tah brought up his disruptor and shot the stranger dead.  Immediately, 2 members of the now-hostile party raised their own guns and shot back.  The other 2 charged forward as they drew their swords.  Mor'tah fell to the ground, temporarily stunned [the 'resilient' attribute proves its worth again.  These Klingons are tough!], while his companions drew their own weapons and shot down the swordsmen.

One of the two remaining gang members turned and fled, but the other was made of sterner stuff.  He continued to fire wildly at Vagh and N'Kara; they both took shelter behind nearby bushes.  Although the stranger forced Vagh to keep hidden with a number of bullets that nearly hit him, the captain was able to recover enough to shoot the gunman dead. [Wow!  The THW reaction system means that when things kick off, they happen fast].
N'Kara approached the wounded man.  "What was that about?  Answer!" she shouted, as she shook him roughly.  The wounded man made a bubbling sound and expired.  "Weakling!" she muttered as she dropped the corpse. 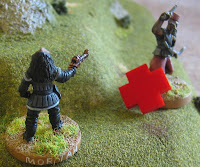 Mor'tah got back on his feet groggily.  "Treacherous vermin!" he called out.  Then he set off at a run after the survivor who had fled.  He caught up with the the man after a short distance and shot him down. 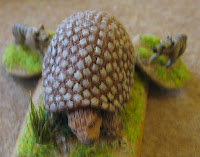 Meanwhile, the strangers' 2 "dogs" were attacking the giant armadillo, although they weren't making any impression on its armoured flanks.

Vagh unsheathed his bat'leth and charged into the melee.  The nearer dog was taken completely by surprise and received a deep gash on one flank from the Klingon's attack.  It immediately whimpered and fled.  The other dog rounded on Vagh, but after being fended off once it also fled.

The armadillo was trying to make its escape whilst the dogs and the security chief squared off.  It didn't managed to get very far on its short legs before some of the other trigger-happy Klingons started to shoot at it.  Almost all of their disruptor bolts just bounced off its thick hide; only one grazed a leg.
When captain Mor'tah returned and saw this, he called out "Leave it be!  This animal is not dangerous and I see no honour in shooting it at point-blank range.  We are Klingons!"

With that, the hunting holiday ended; any other game in the area must have been scared off by the noises of the fight.  Most of the crew were very satisfied with the 3 days of sport, though Leyra was mortified to have missed out on the big fight at the end.  Both Maal and Mor'tah had impressive trophies and all had plenty of tall tales to tell!

I was hoping that these games would be a good test run for my "Attributes for Animals" amendments to the basic Lost Lands rules.  However, these games weren't really a very fair test.  Here are some observations about how they worked: