A zombie, a Klingon and a dodo walk into a bar...

A zombie, a Klingon and a dodo walk into a bar...

Or I could just stop wittering and show you all some of the wargaming stuff that I've completed recently (over the past 2 weeks or so).  That would be better, wouldn't it? 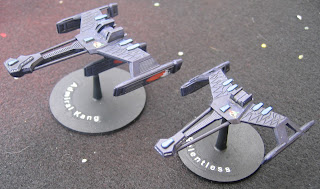 The battleship Admiral Kang and battlecruiser Relentless will give my Klingon space fleet some real punch.  These models are from Studio Bergstrom; I'll use them as Klingon ships although officially they are "Sing-Ons" instead.

I like these so much that I took several pictures of them; here's another from a different angle.

A little while ago, I showed off some Egyptologist models.  As I was writing about them, I realised that, apart from a few ruffians, I didn't have much in the way of opposition for these adventurers.  Well, since then I've been starting to gather some...

Firstly, some scarab beetle swarms.  These models come from Black Cat Bases, who are excellent for such things. They have a large range of swarms that really do look like a multitude of animals (I can't see myself using a turtle swarm for anything, but no doubt someone will find a gaming use for them!) 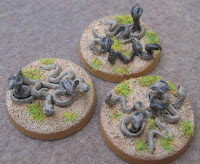 Next up are some snakes from a large packet that I've had lying about for years.  I think they are from Black Tree Design, but I cannot remember for sure.  Anyway, I'm not too happy with the way my painting turned out on these, so let's move on swiftly. 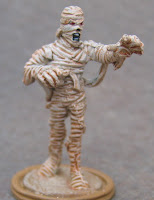 Here's the big guy himself, the boss monster at the centre of the tomb, The Mummy!  This one comes from the same Blue Moon set as most of my Egyptologists.

When I saw them in the Black Cat Bases catalogue, I immediately thought that their dodos would be great as light relief for a "Lost World" expedition.  These are odd models in many ways.  Firstly, they are huge; these birds come up to a 28mm human's shoulders and are considerably bulkier than a man.  In real life, the birds stood about 1m tall.  Secondly, the anatomy is a little suspect (for example, they don't have the very distinctive upright tuft of tail feathers).  Still, kudos to the manufacturer for making such odd creatures available in miniature.  I'll use them anyway in my games, though they might just have to be "man-eating giant dodos" instead (mwahahaha!).

A couple more zombies made it to the head of the task list.  I'm working my way slowly through 2 sets at the same time; one of these is from each set.  See here for a previous update on zombies.

Lastly, I thought that some livestock would be useful.  Primarily this would be as an objective or a distraction in a game of Saga (if I ever manage to paint up my other warband).  I suppose they could be used in any game with 28mm figures though; I'm interested to hear any serious (?!) ideas about how I might use a flock of chickens in All Things Zombie!

So there you have it: this is roughly a fortnight's output from my workbench.  Some of these items were assembled, based, undercoated and painted from start to finish within that period.  Others were merely completed, having been worked on before and then spent a long time waiting for my full attention.  Still, they're all finished now!