I run a lot of games at the Helensburgh club.  Roughly speaking, this is 1 game per week during school term times, so something like 30 sessions per year.  Each of these has a cunningly contrived and balanced scenario that's designed to stimulate and interest all the players.  None of my games are ever get thrown together at the last minute, just because real-life pressures mean that I haven't thought about it until the day before, no sirree!

Well, OK - that last bit is not totally true.  Sometimes a scenario is underdeveloped and doesn't play out the way I'd hoped at all.  This is not frequent, but here is an example; this didn't really work well in my view (though the players seemed happy enough, for all that).  Note that I'm not trying to railroad my players into certain courses of action when I set up a game.  However, it's important that both/all sides feel they have (a) something to do and (b) a reasonable chance of achieving their goals. 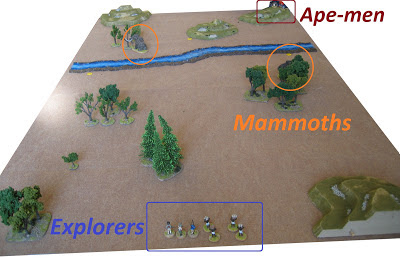 We're back in the Lost Lands this week.  A group of explorers have established a base camp, from where small parties intend to set out to gather specimens for science, meat for the pot and trophies for the ancestral home.

However, before they can achieve these goals the camp is raided in the night by a couple of large bull mammoths ("Mamut" and "Ogrom").  Amongst other destruction, the crate containing all the bottles of gin is smashed.  Swearing revenge, Sir Reginald Utterly-Barking leads a small band to hunt down the animals, unaware that they are crossing the territory of a local tribe of ape-men to whom the mammoths are sacred!

So, this is a 3-way battle (the mammoths are a player side as well as the explorers and the "ape-men"): 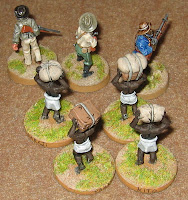 Note that these objectives were secret and known only to the appropriate faction:

As is often the case with my games of Lost Lands, we had time to run the scenario several times in our 2 hours of club time.  This is what happened the first time around:

The explorers advanced until they passed the clump of trees where Mamut was feeding.  On taking the In Sight test, the mammoth decided that he really didn't like the look of these strangers, so he charged!
The native porters fled immediately, but the 2 white men and the askari all fired at the rapidly-approaching beast.  Their hasty shots went wild... 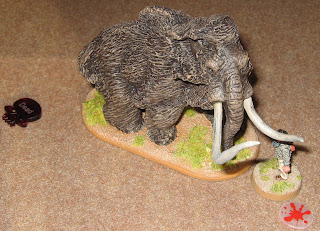 ...so Mamut stomped on Professor Contender before spinning round to gore Sir Reginald. 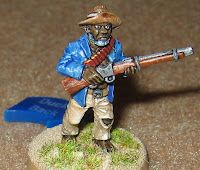 Bakhari decided that he wasn't going to do the white mens' work any more; he fled for the trees, hoping to be able to evade the victorious beast in the thicket.

Result: the explorers were obliterated.  The Neanderthals hadn't even managed to cross the river (they're slower than average), so they slipped away quietly and left the field to the trumpeting mammoths. 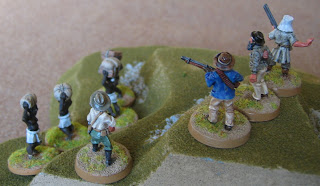 This time, the explorers (their force bolstered by a second white man with elephant gun) climbed the hill on their baseline and refused to move from it!

Again, the Neanderthals made slow progress and didn't manage to get close to the action. 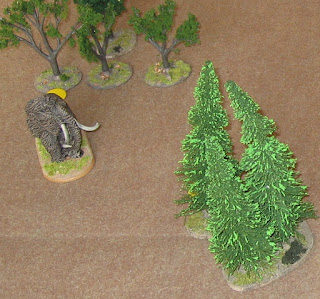 Ogrom and several PEFs (Possible Enemy Forces) approached the explorers, taking care to remain hidden by a clump of fir trees whilst doing so. 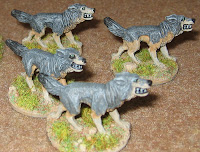 One of the PEFs advanced past the trees and was resolved as a small pack of dire wolves.  However, the explorers were waiting for just such an event...

First one wolf was shot down, then another.  The last remnants of the pack fled in disarray before they could reach the humans, terrified by the sudden death of their fellows.

Mamut and Ogrom both moved forward to investigate the strange noise and were joined by a 3rd mammoth, as one of the PEFs just happened to resolve as a mammoth.  The stunned explorers didn't react initially (the group threw a double-6 for their "in sight" test, then rolled a further 6 for their leader dice!).  When the men finally came to their senses, they decided to make a hasty strategic withdrawal - they ran away!

Result: no casualties to any player forces, but the mammoths held the field (the Neanderthals withdrew as quietly as possible without even seeing either the mammoths or the humans). 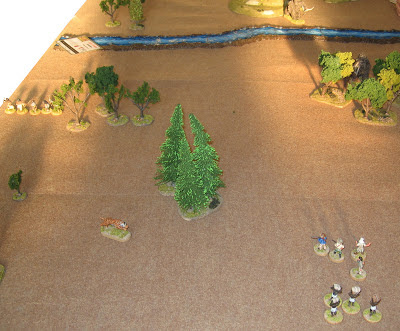 For the third game, I started the Neanderthals half-way along one edge of the table, rather than at the far end.  With their slow movement rate, this might allow them to be part of the action!

Almost immediately, they encountered a PEF; this was resolved as a Smilodon (sabretooth).  It looked as if the beast would attack the Neanderthals, but the explorers could also see it and one of them fired at the animal.  Warily, the animal turned to face the humans instead. 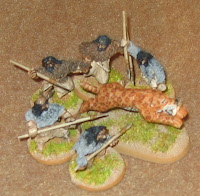 The Neanderthals had a good run of initiative rolls and silently approached the big cat from behind.  This was too good an opportunity to miss and they fell upon it, stabbing with their flint spears.  In the initial rush, they knocked the Smilodon down and wounded it.  However, the predator wasn't badly hurt; it quickly regained its feet and turned on its attackers! 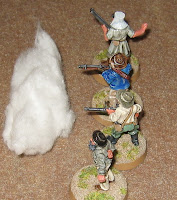 This was too much excitement for the nearby explorers.  They couldn't resist "trying to help" and started to fire volley after volley into the melee! 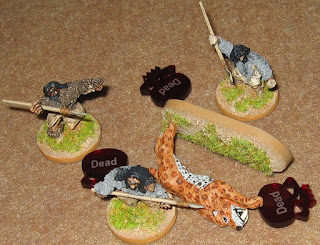 By the time the smoke had cleared, Crug, Brun and the smilodon were all dead from gunfire.  The remaining Neanderthals were defiant and angry.  This puzzled Sir Reginald: he thought they should be grateful to the explorers for having helped to slay the sabretooth.  He was even prepared to let the cavemen have the pelt as a sign of goodwill!

Result: Another cultural misunderstanding that ended in a massacre.  That seems to happen a lot in my games of Lost Lands, though in no way had I planned such an event.  In this game, the mammoths just stayed where they were, grazing and letting the noisy humans fight it out.

This was designed as a 3-player scenario.  However, in all of the games we played only 2 forces had any contact; the 3rd side might as well have not been there.  That's not what I had intended at all.

I'm also a little unhappy with the one-sided results, particularly of the first 2 games.  It's always difficult to balance a game where the technologies, resilience and abilities of each force are radically different from each other.  This is very apparent when fielding rifle-armed hunters against large wild animals.  At range, the hunters will almost always win, whilst in melee the mega-fauna cannot really lose.  It's one of gaming's great perennial problems and if you have any solutions then I'd be delighted to hear them!