The strange events at Chessex-under-Wold

I was at a bit of a loss as to which game I should host at the Helensburgh Club this week.  I like to rotate through my "stable" of rule-sets, but several of the more popular ones have had an outing quite recently and so they were out of consideration.  I've got reasons for holding off on running All Things Zombie and Full Thrust (all will be revealed in due course), so they were out too.  So, it was time to crack open the Doctor Who Miniatures Game (DWMG) again!  [Please don't interpret this the wrong way: DWMG is a fine game, but the subject matter doesn't lend itself well to the large, multi-player games which I  provide at the club]. 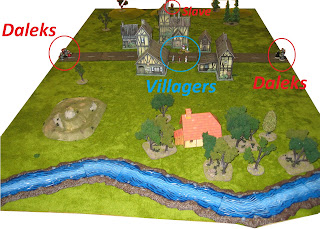 Some time in the 1970s, the Daleks hatched yet another nefarious plan to conquer rural England.  This time, success would depend on capturing a number of humans, in order to analyse their DNA and do some horrible genetic experiments on them.  To this end, the aliens selected the sleepy village of Chessex-under-Wold as their target; a snatch squad would surround the village and harvest the locals!

The monster player chose to approach the village along the road, entering equal forces from each end.  A lone pig slave came in from the north, to prevent any villagers from escaping in that direction.  Initially, the daleks moved quite slowly, but the pigs ran in from all directions as fast as they could. 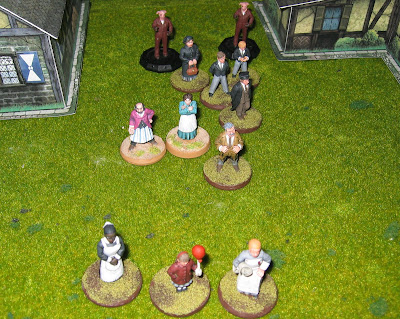 The appalled civilians streamed south out of the village, away from the horrible alien menace, but closely pursued by the 2 nearest pig slaves.  Indeed, these monsters had just reached their first 2 intended victims and were about to attack them... 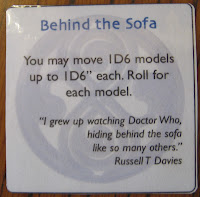 ...when the good players revealed a "Behind the Sofa" random event card.  They rolled a '2' for the number of models and used this to move both the threatened civilians out of the clutches of the pigs! 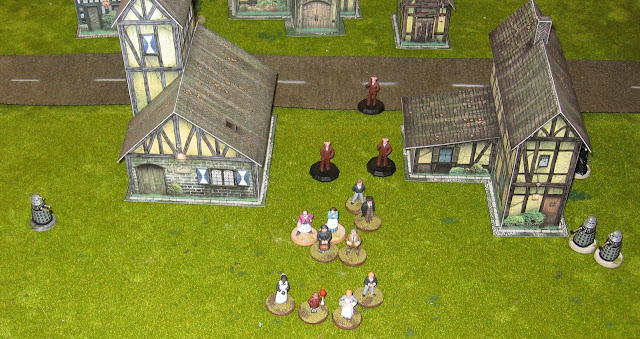 However, with the pig slaves behind them and daleks approaching from both sides, it didn't look as if this would be more than a temporary reprieve for the villagers. 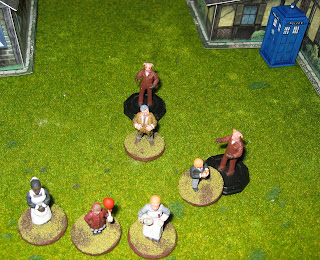 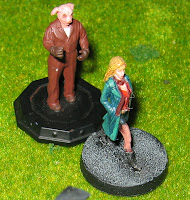 One pig slave and one dalek drone fled in terror from the unearthly noise, but the rest of the monsters held their ground.  From the Tardis, a young woman (Amy) ran towards the villagers.  One of the pig slaves immediately pursued, but couldn't quite capture her. 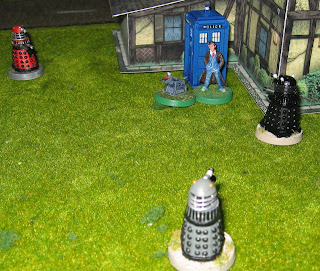 Then, more leisurely, the Doctor and his robot dog, K-9, stepped out of the machine - only to find that he was surrounded by angry monsters! 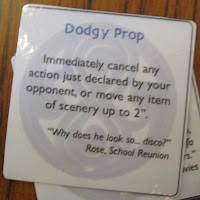 Rather than be shot by 3 daleks, the Good side played another event card.  They used the "Dodgy Prop" to move the Tardis... 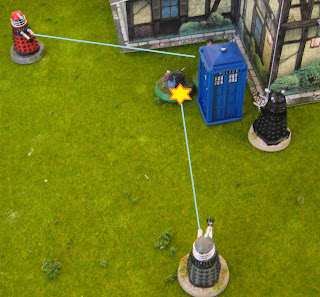 ...so that it blocked the line of sight for 2 of the monsters.  The 3rd dalek fired at the doctor and missed, though K-9 took some damage from the drone.  The tin dog still managed to move and shoot dead the pig slave who was pursuing Amy! 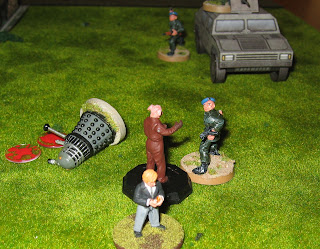 The captive boy was nearly off the board, held firmly by a pig slave and escorted by a grey dalek, when UNIT forces finally arrived.  A truck fitted with an MMG drove off the road towards the monsters.  The gunner hosed the grey dalek with .50 calibre bullets; this was too much for the alien's armour and it disintegrated.  At the same time, a couple of troopers dismounted to try to save the boy, but they were too far away and the pig slave would certainly reach the edge of the board in its next turn. 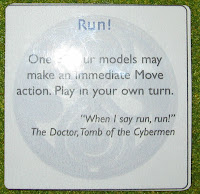 However, the good side weren't so easily beaten.  They played their 3rd and last event card and used it to make one of the UNIT troopers "Run" into close combat with the pig slave.  The annoyed creature immediately had to release its captive so that it could defend itself!

Elsewhere, K-9 went head-to-head with a dalek drone at close range.  The little dog fired his small nose laser and used up all his luck points trying to hit the target.  Sadly, he failed to injure the warrior; in return it blasted K-9 to bits. 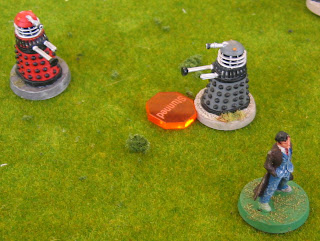 The Doctor ran for his life.  He managed to temporarily scramble the circuits in one dalek's battlesuit, but he had to use up a lot of his luck points to avoid taking serious damage from the others. 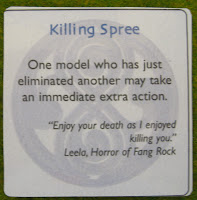 By this time, the Black dalek was taking an interest in the annoying UNIT troopers to the east.  The temporarily-captured schoolboy had long since fled, so the dalek leader fired into the growing melee between the pig slave and 2 UNIT men [the good side wouldn't dream of shooting into a melee, in case they hit their friends.  However, a dalek wouldn't worry about such a thing!].  The blaster shots vapourised the pig slave and one of the troopers, then the monster player used a "Killing Spree" event card to fire again and finish off the remaining soldier. 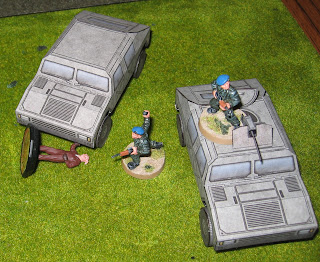 A second UNIT truck loaded with reinforcements arrived.  It pulled in next to the first one, running over the 3rd and last pig slave as it did so.  The first truck's MMG fired at the stunned grey dalek; even though the range was long, it cut down the alien (somewhat against the odds, it has to be said!). 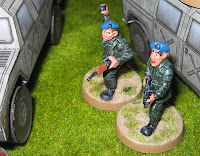 To the monster player's complete disgust, the turn ended with a single UNIT trooper aiming his rifle at the sub-commander dalek.  Despite the extreme range, the incredibly lucky soldier hit his target, penetrated its armour and caused enough damage to destroy it.  Scratch one red dalek!

This left the monster player just the black dalek supreme and 2 grey drones.  One of the drones was still in the village's main street, but the other was pursuing the villagers, near to the river bank.  It wasn't close enough to capture any, so it shot one person dead before being recalled by its leader to deal with the ever-increasing numbers of UNIT soldiers. 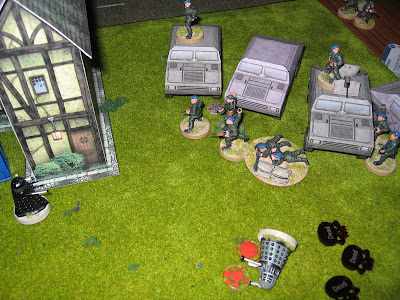 UNIT were now feeling quite confident.  After all, they'd already destroyed 3 daleks (and run over a pig slave).  All the troopers who could now opened fire on the black dalek.  This had absolutely no effect; every bullet either missed or just bounced off, leaving the bored monster unscratched. 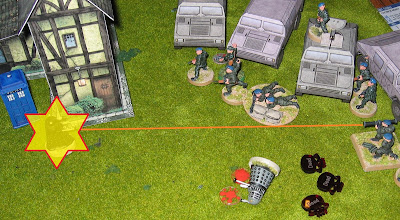 The dalek supreme might have been forgiven for being cocky, but UNIT weren't done yet.  A bazooka team leaped from out of their 4th and last truck.  Taking only a moment to steady himself, the operator fired his rocket at the monster and achieved a direct hit.  He then rolled a '6' for the number of damage points; the dalek's leader exploded violently! 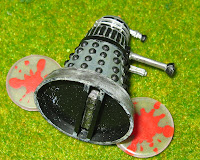 The nearby drone avenged his leader by killing 1 member of the bazooka team, though not before the weapon had been reloaded.  Quickly, the gunner fired again and scored a direct hit: another dalek destroyed! 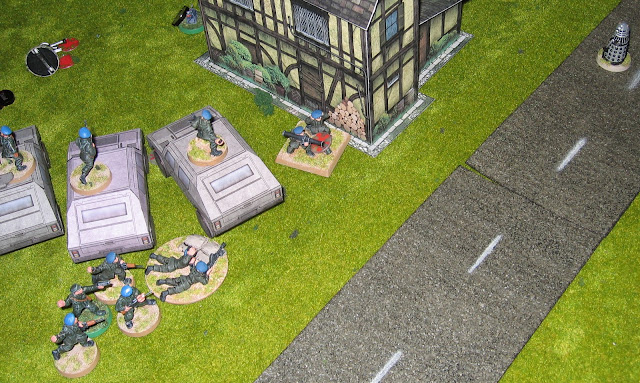 The end of the game saw the last remaining dalek trundling along the road, while UNIT prepared an ambush from behind the last house in the now-deserted village.  I'm guessing that the humans probably had enough firepower to take out the monster, though not necessarily without cost.

So, who won?  Here are the standings:
The daleks spent a lot of their mid-game effort trying to kill the Doctor and his companions.  They managed to strip their targets of all their luck points and then inflict injuries.  However, ultimately this distracted the monsters from either capturing civilians or fighting back against UNIT.  The vendetta was their downfall, I think!
Posted by Colgar6 at 21:26