Black Powder: The Russians are coming!

It's some time towards the middle or end of the Napoleonic wars.  Somewhere in central Europe, a Bavarian brigade is quartered in the sleepy town of Kufstein.  In the early morning, a frantic messenger arrives with news: an entire Russian division is approaching and will be here imminently!

General Hausmann, the Bavarian commander, quickly arrays his forces for defence and sends his own courier for help.  The nearest allied force is General Cotillard's French brigade, but can they reach the town before the Bavarians are attacked?  Even if they do arrive, the allies will still be outnumbered; can they avoid being overwhelmed by the Russian assault? 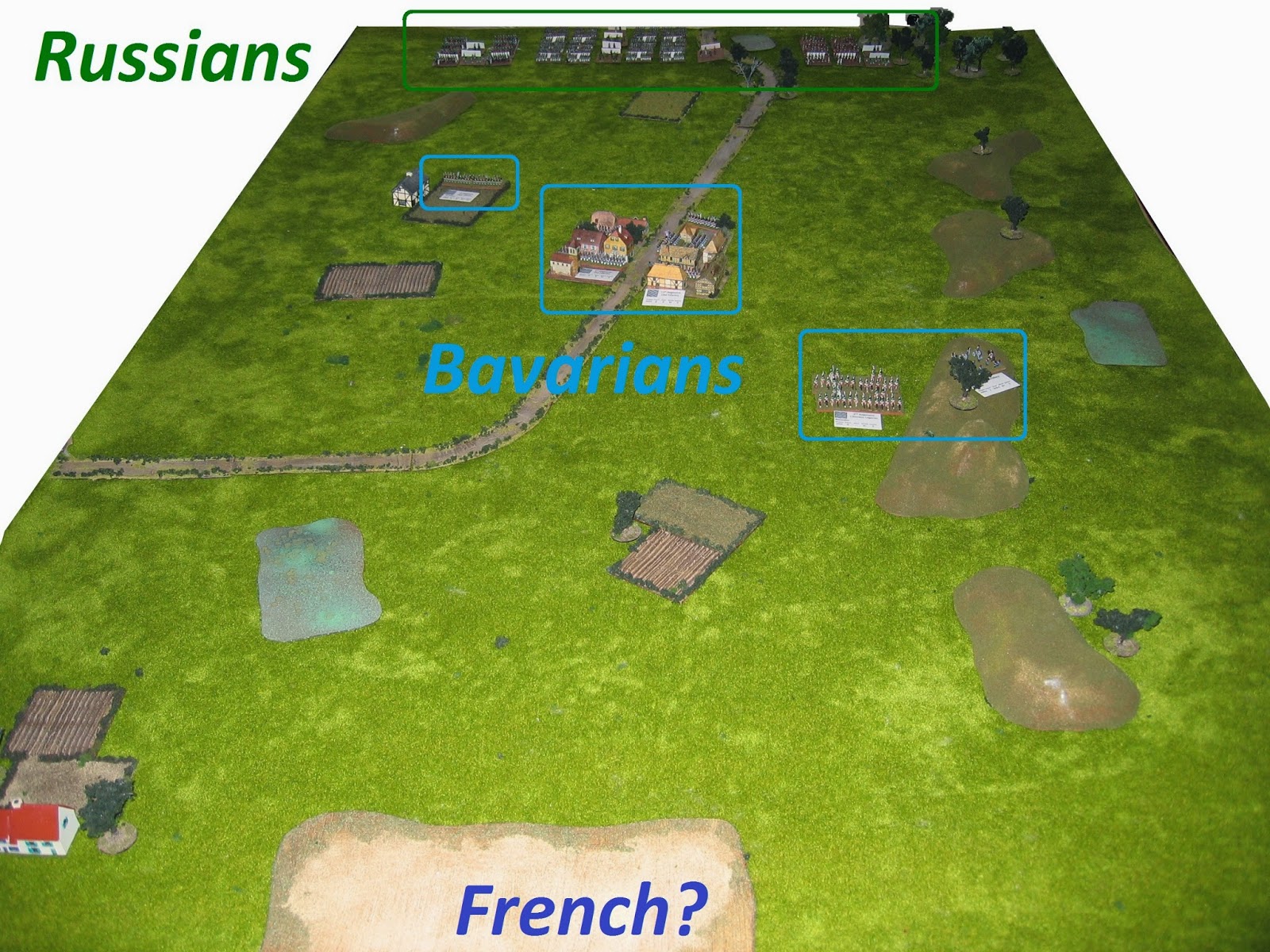 There is a small town (Kufstein) in the centre of the board.  The town is split into 2 districts by the road that runs through it; each district may be garrisoned by 1 unit.  All of this built-up area provides substantial defensive bonuses for any troops who are garrisoning it.

A few fields are scattered around the table.  The hedgerows which surround these provide some cover from shooting and a minor defensive bonus in melee.

There is a line of low hills to the east; these give height advantage when firing but they are too shallow to impede movement.

All of the Russians start on the northern table edge and are available from the start of the game.

This is determined only on possession of the town by the time the game ends (because we run out of troops or exceed a given time limit.  Or because we need to stop for lunch).  If either side holds both districts of the town then they win outright.  Otherwise if each side holds 1 district then it's a draw.

Before the start of play, we decided to roll for the command abilities of each general and brigadier.  We used the very simple method of starting with a rating of 8 (competent) and then rolling a 'fudge' dice to adjust this up, down or not at all.  The results were thus: 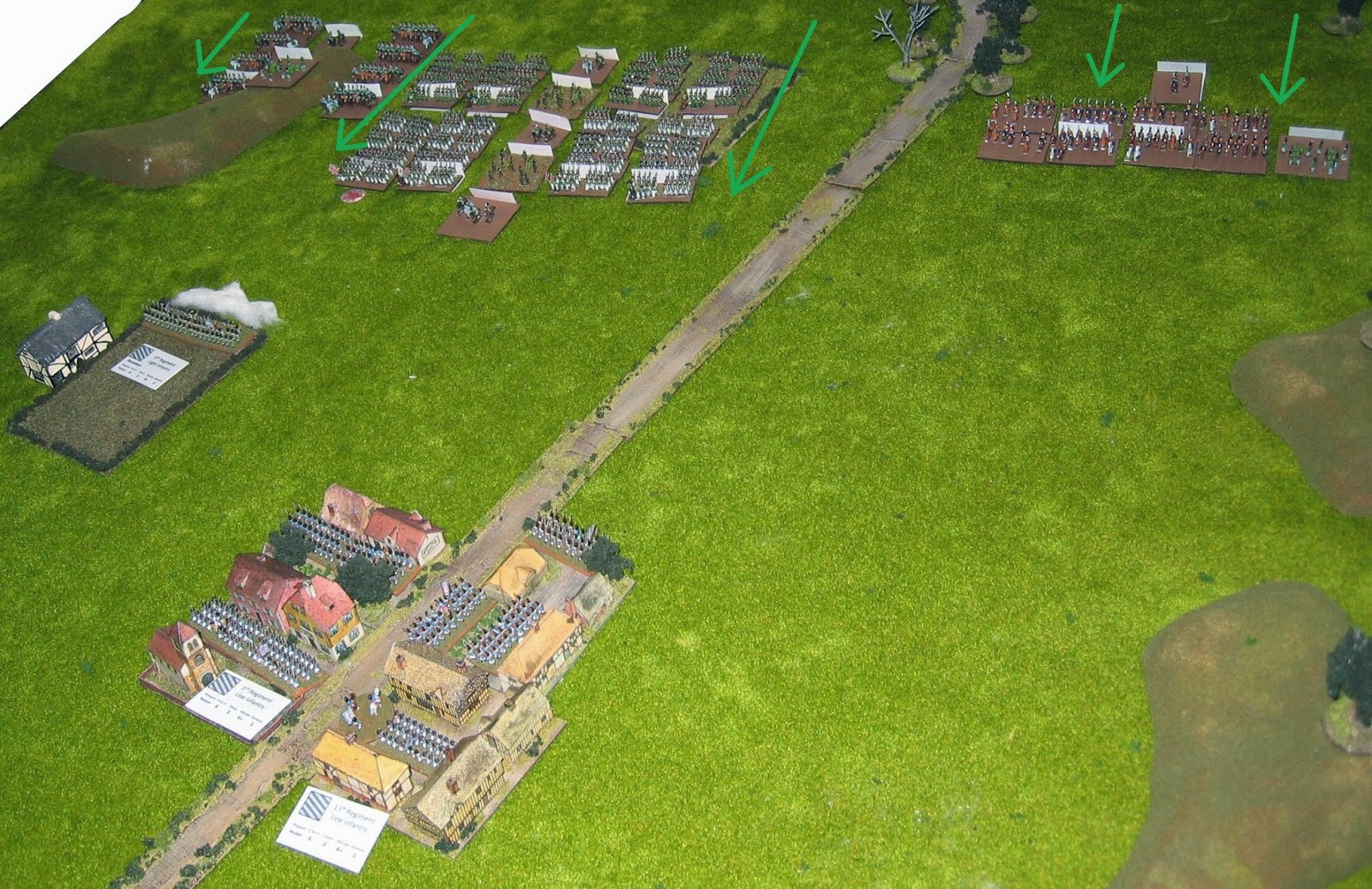 Unsurprisingly, the Russians advanced straight away.  A dense block of infantry in the centre made good progress, but the cavalry brigades on the wings were less eager and only moved slowly. 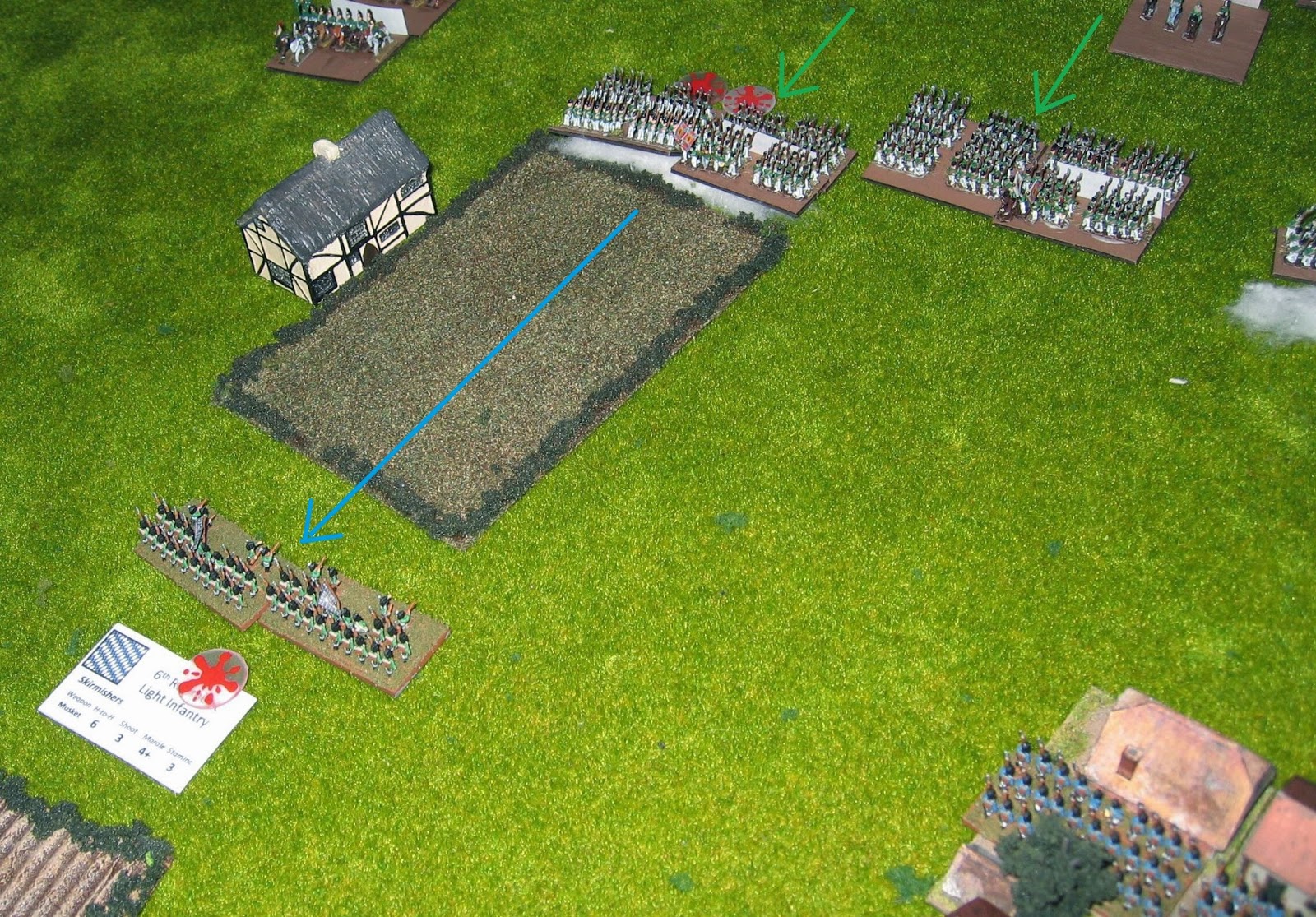 Initial contact was made between the lead Russian infantry and the Bavarian light troops.  The Russian column suffered significant losses in the attack, whilst the small unit of defenders drew back in good order to look for another hedgerow. 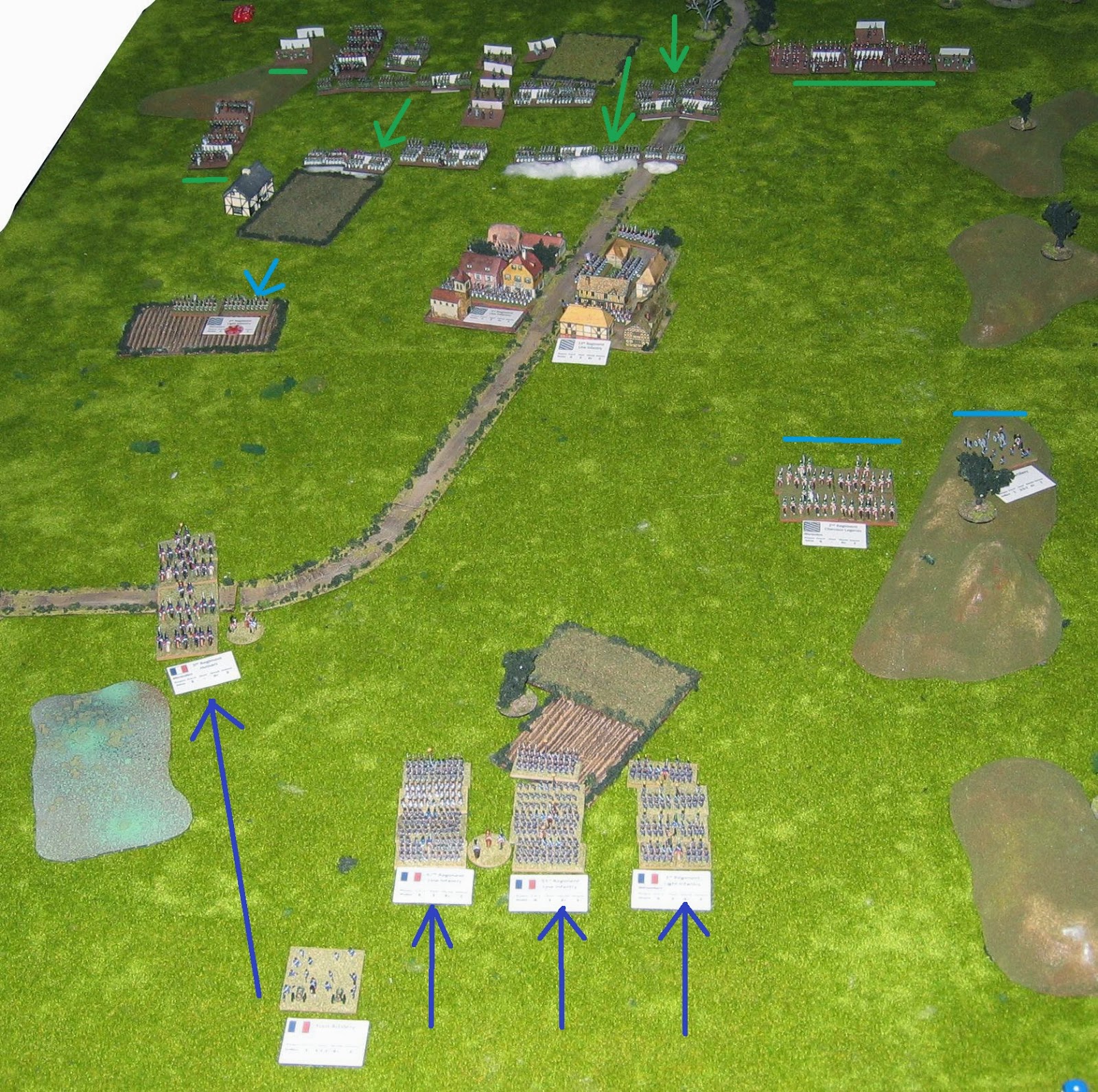 The French relief force came marching on at the double as soon as they were permitted.  This didn't look good for the Russians.  General Raevskii was tearing his hair out; his cavalry (which should have been ranging far ahead and interfering with the French advance) sullenly refused to move.  Even the 2 Russian infantry brigades were only just bringing troops into action - and that was only because Raevskii was issuing many of the orders personally.

A couple of Russian battalions did make it into position to attack the town, but they suffered very badly from defensive file.  The Bavarian position benefited from thick stone walls, so the Russian musketry made little impact in return. 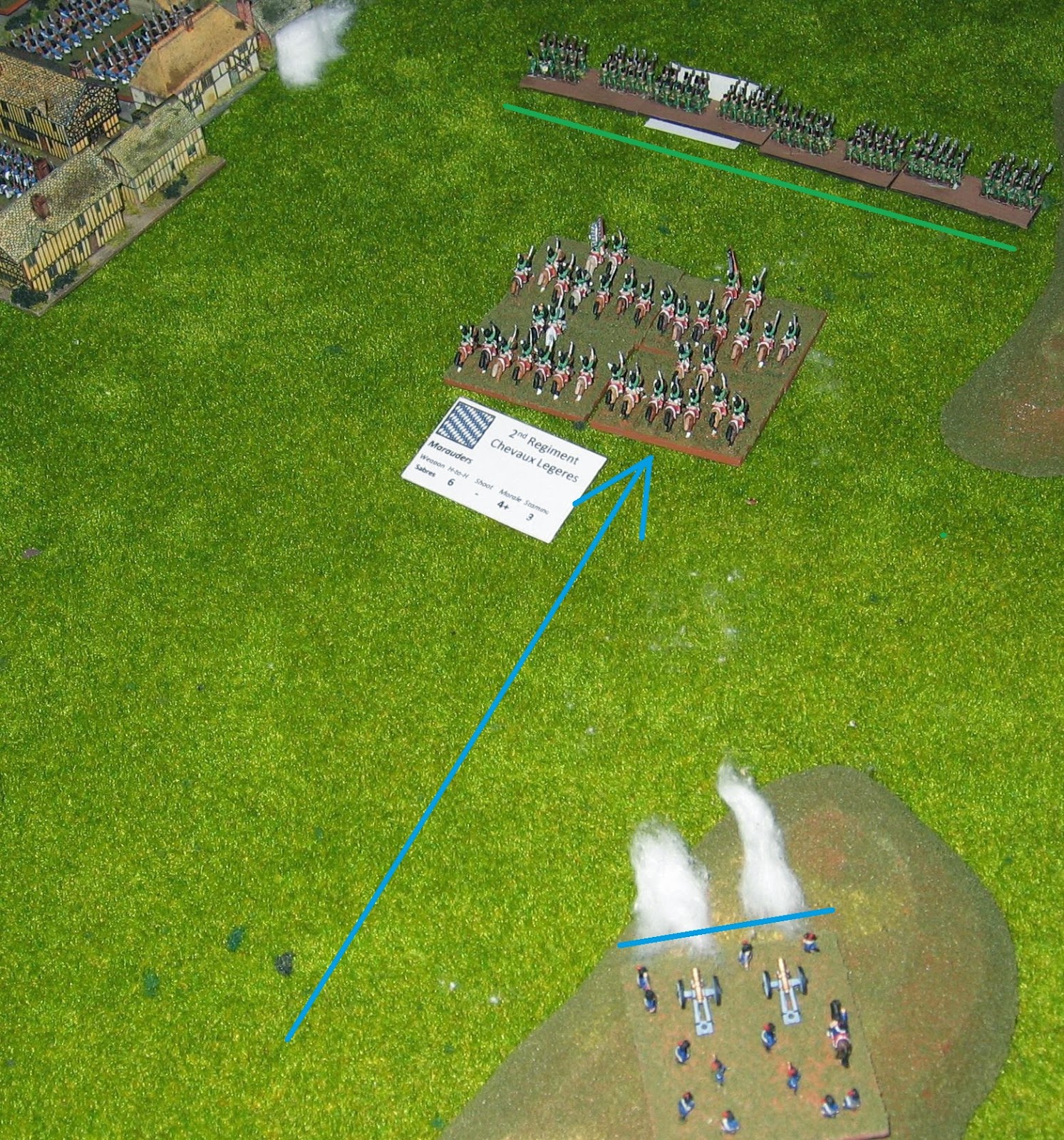 A lone Russian battalion made its way to the eastern side of the town.  The Bavarian light horse moved forward to threaten it and force the Russians to form a square.  If that happened then the nearby Bavarian battery would have been able to pummel the infantry.  However, in a (for them) rare command mistake, the cavalry regiment didn't move far enough and left itself vulnerable to being shot.  Russian marksmanship was poor, though and the light horse escaped serious injury. 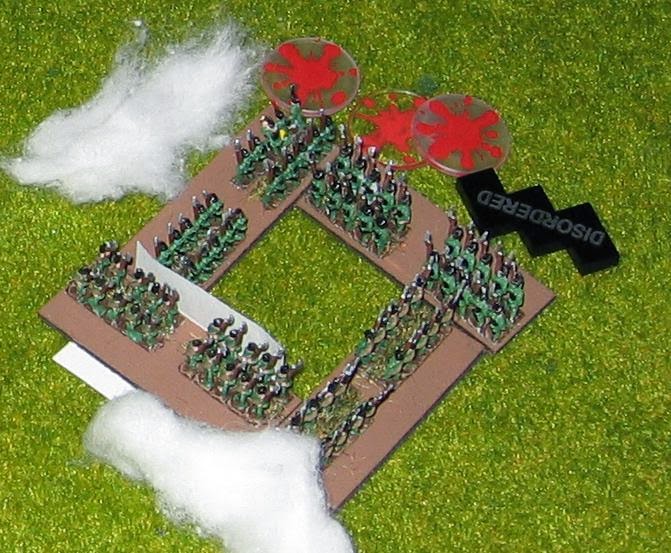 The Bavarian cavalry soon rectified their mistake, made a feigned charge and forced the Russians into a square.  Once that happened, the horsemen retired a short distance and let the cannons do their terrible work. 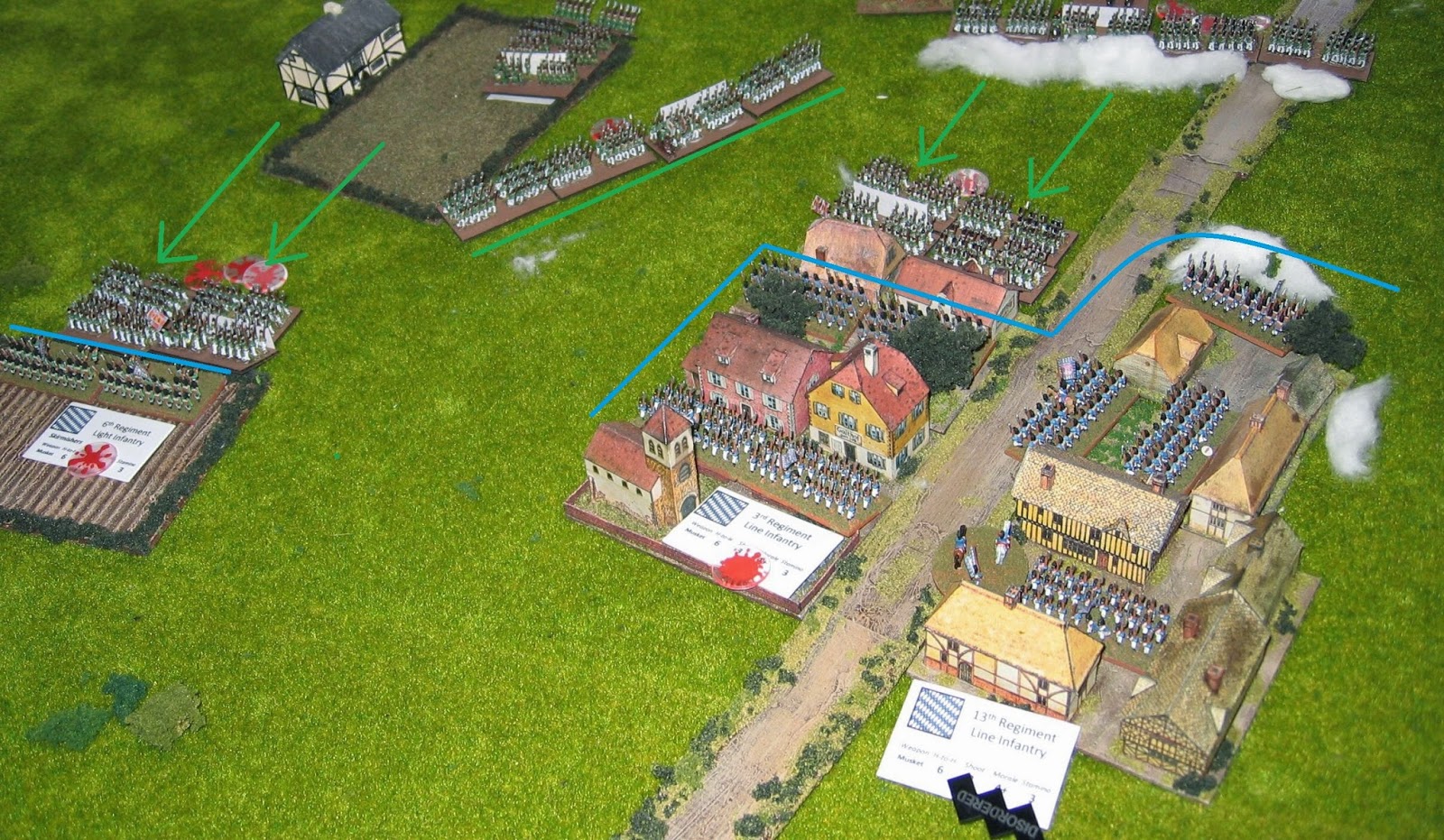 The main body of Russian infantry now attacked.  One battalion charged the Bavarian light troops in the ploughed field and were savaged in doing so.  Another unit attacked the town, but their support failed to materialise.  The attackers did well to hold on briefly, under the circumstances. 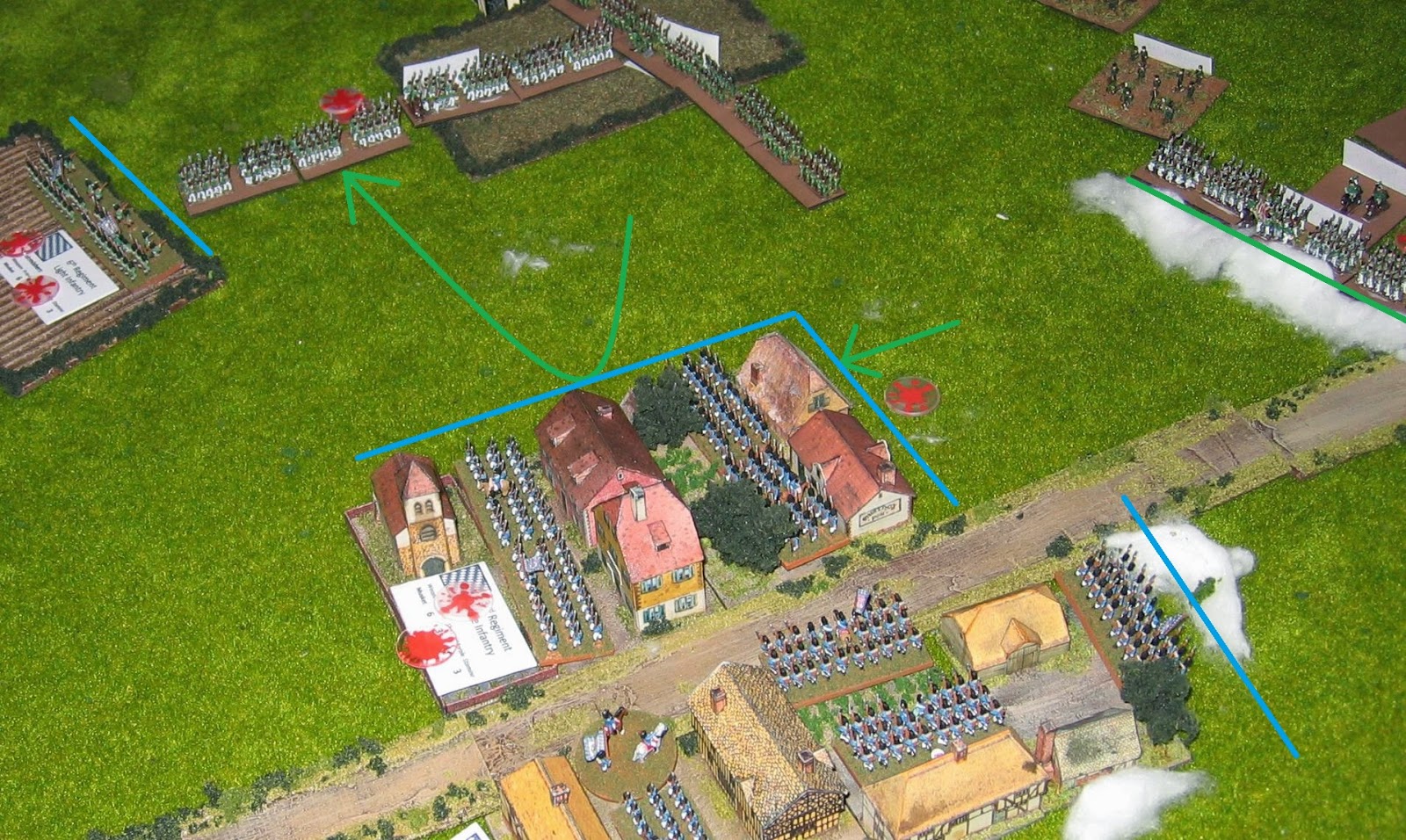 In a bravura performance, the Bavarian light infantry in the field destroyed the battalion that was assaulting them across the hedge.  A further Russian unit attacked the town, but the defenders routed the original battalion and drove the newcomers back.  Indeed, the second Russian infantry were driven back to a position from which the Bavarian light infantry could now enfilade them at close range! 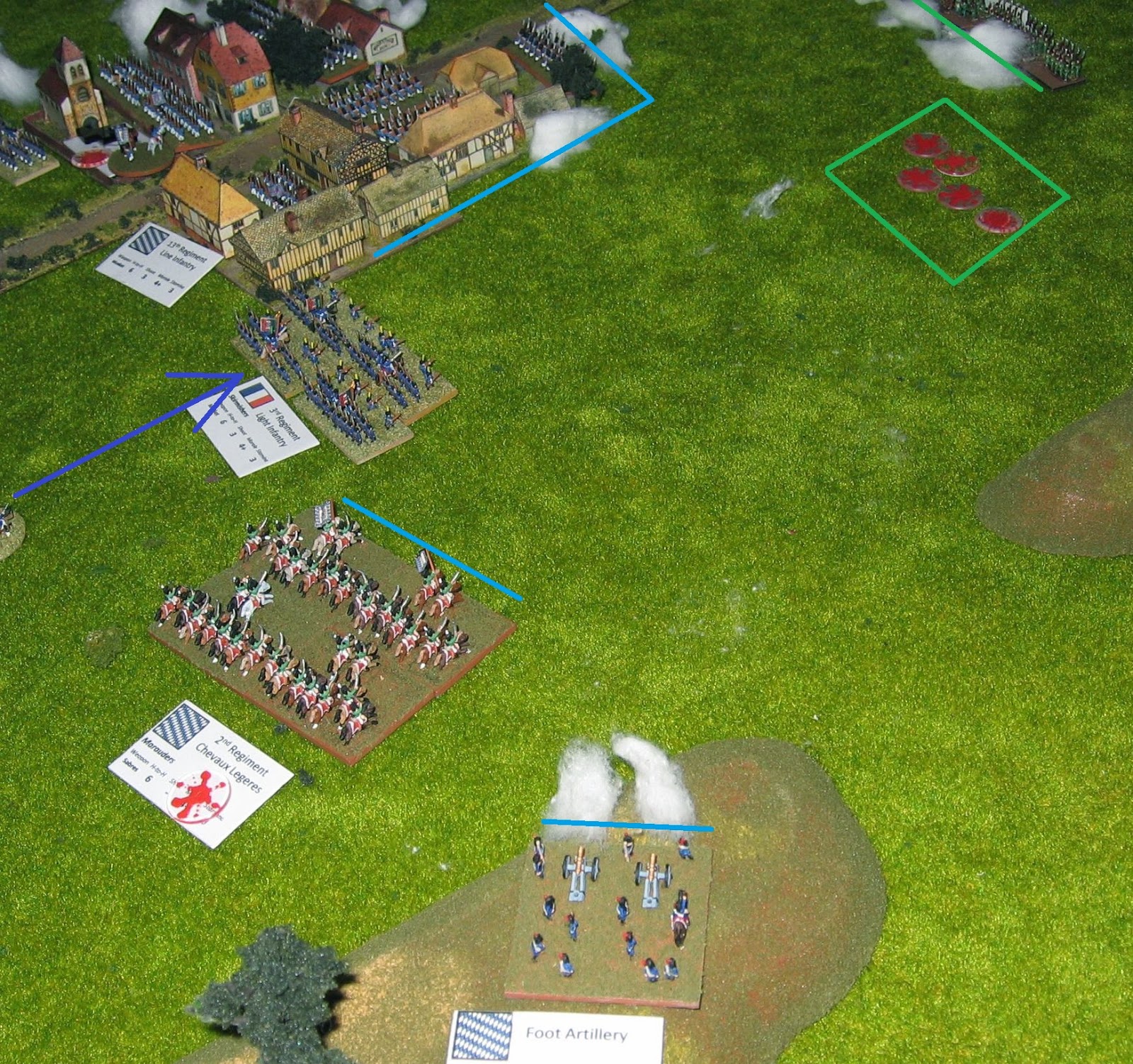 As the French infantry started to arrive at the town, the Bavarian cannon made mincemeat of the poor Russian square (which dared not move through fear of the Bavarian cavalry). 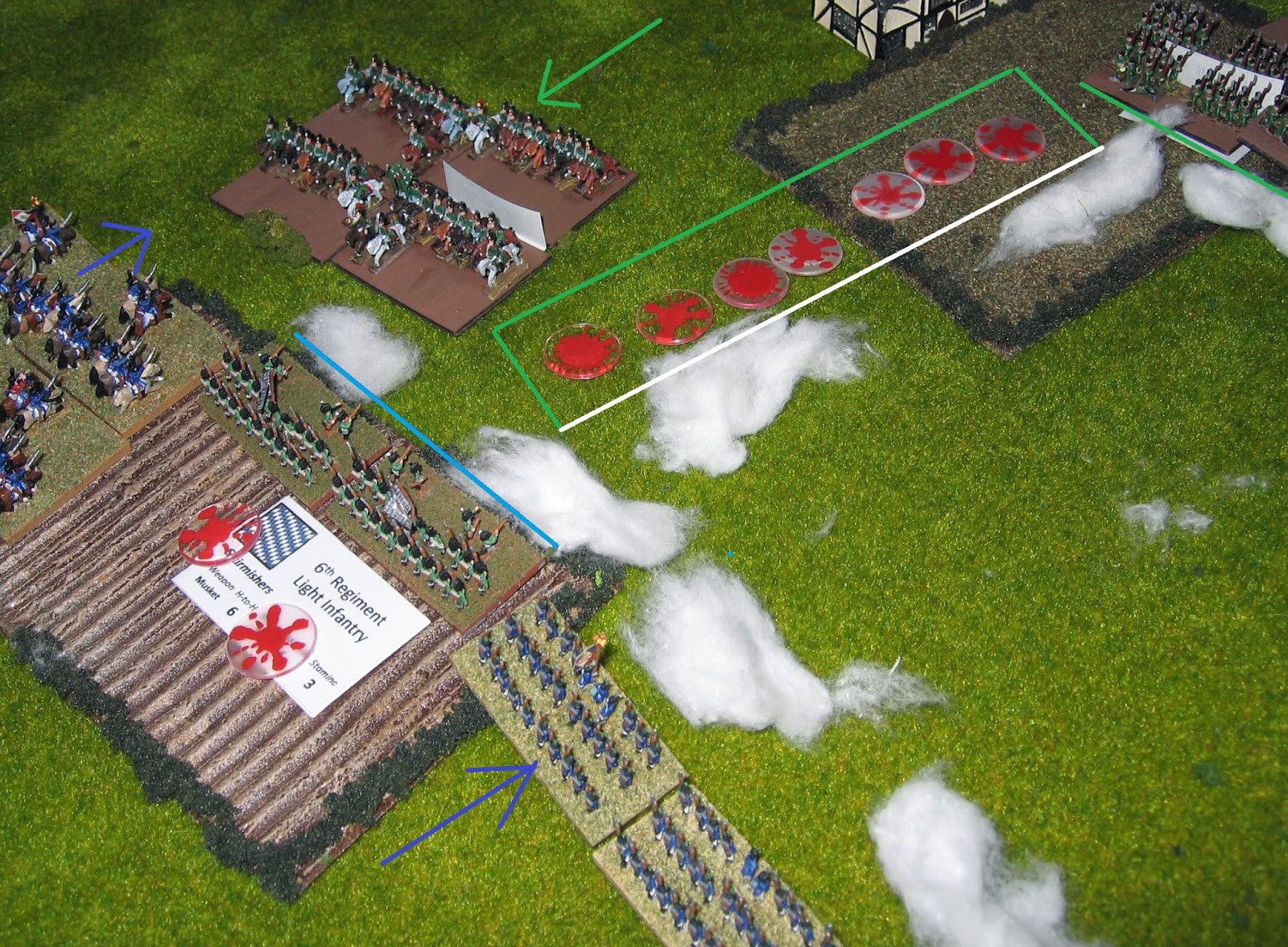 To the west of Kufstein, the story was similar.  French infantry marched up, arrayed for battle, just as the 2 companies of Bavarian light infantry shot the enfiladed Russian battalion to pieces.  One Russian dragoon regiment finally advanced tentatively, but this was countered by a French Hussar unit and even though the 2 groups of cavalry were close enough to shout insults at each other, no contact was made. 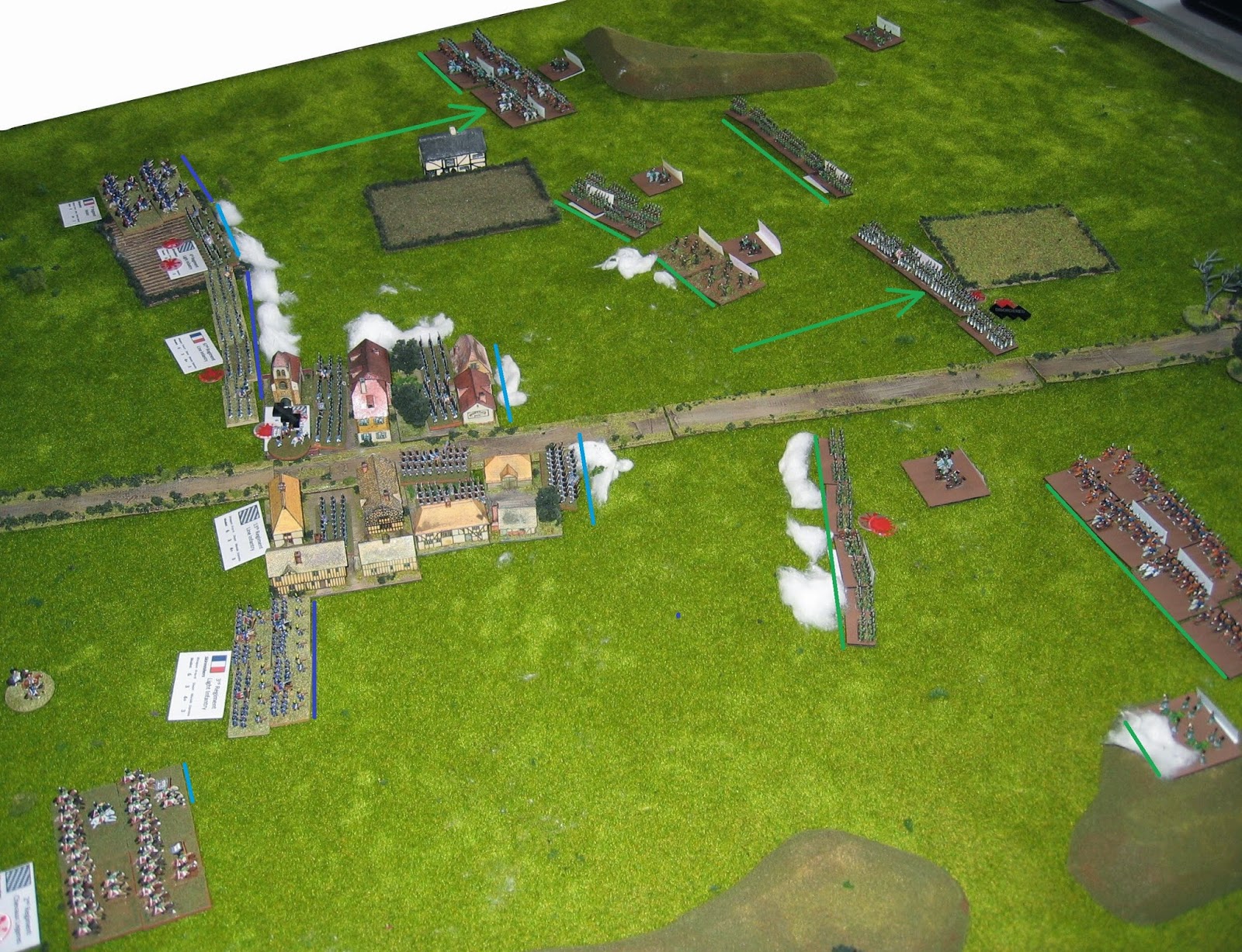 This was too much for the Russians.  One infantry brigade broke and started to rout off the field.  General Raevskii ordered a withdrawal for his other forces.  There was little hope of taking the town with the 3 remaining battalions of the unbroken infantry brigade and the Russian cavalry probably wouldn't have achieved much even if they could be persuaded to advance.

That did not go as I had imagined it might!  Poor General Raevskii was surrounded by dullards and incompetents.  Even though his plan was quite reasonable and didn't require much finesse, his subordinates just wouldn't behave.  In fact, it looked strongly as if the Russian cavalry commanders were more concerned with their inter-service feuds than with fighting the enemy.  I wonder if Raevskii was an infantry officer before his promotion to General; perhaps the cavalry looked down upon him?

Some awards are due, I think: