SOBH: The Summoning of Asmodai

2 battle reports back-to-back?  My last posting was also a battle report, so you may be wondering what's going on.  Well, last Saturday my friend Steve came over for the day.  As well as the Napoleonic game that we played in the morning, we had time in the afternoon to play Song of Blades and Heroes.


We debated briefly whether to use my Robin Hood warbands in our game, but in the end we went with the Witch Hunters.  This was mainly because I was keen to try out the Song of the Ancient Ones scenario from the Song of Wind and Water supplement.  The scenario revolves around magic users from one warband attempting to summon something supernatural from a shrine in the centre of a stone circle.  Sounds like a job for the witches!

We played the Song of the Ancient Ones scenario straight out of the book.  The witches would be the defenders and would attempt to summon something nasty from the centre of the magic circle, whilst the local humans (soldiers and professional witch hunters) would try to stop them.

Roughly speaking, the witches have to build up 9 "power points" of magic in the circle and then cast a summoning spell to bring forth a demon.  This doesn't automatically grant them a win, but will add to their victory points and will (probably) give them a useful ally.

One thing that we found slightly confusing was the scenario's description of what happened if someone entered the ring of stones.  In the setup part of the scenario, it suggested that such an act would dissipate all the stored power and therefore the ritual would have to start again.  However in other parts of the description, one power point would be lost if someone stepped into the ring.  We went with the latter and further stipulated that each further activation by a character inside the ring would lose another power point. 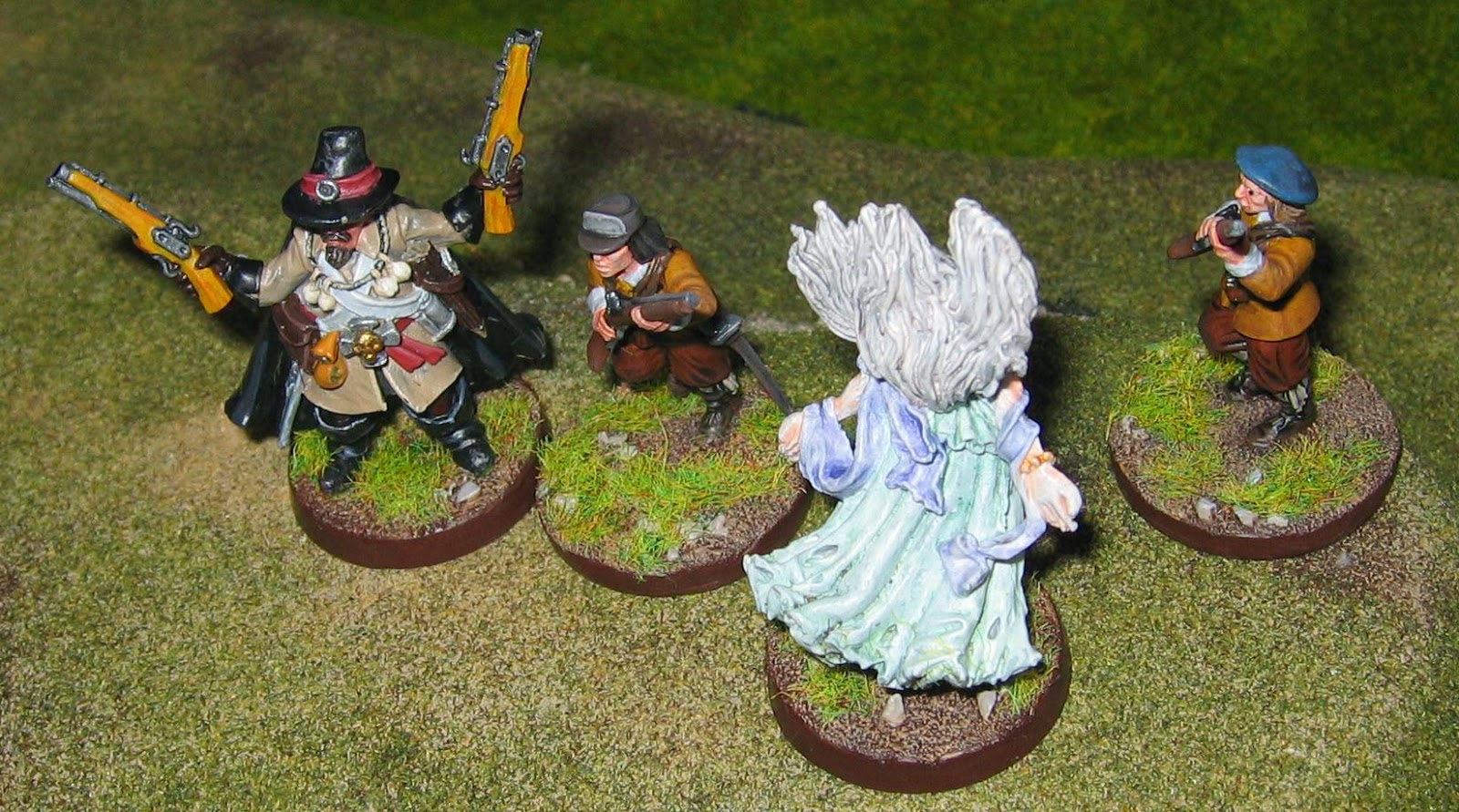 John Sterne (the witch hunter) and 3 musketeers climbed the hill overlooking the dark ritual.  Immediately the ghost came drifting out of the darkness towards them.  One of the musketeers fled immediately in terror.  The remaining men, afraid to charge the awful creature, fired their muskets and pistols at it.  However, their shots passed straight through the apparition without harming it at all. 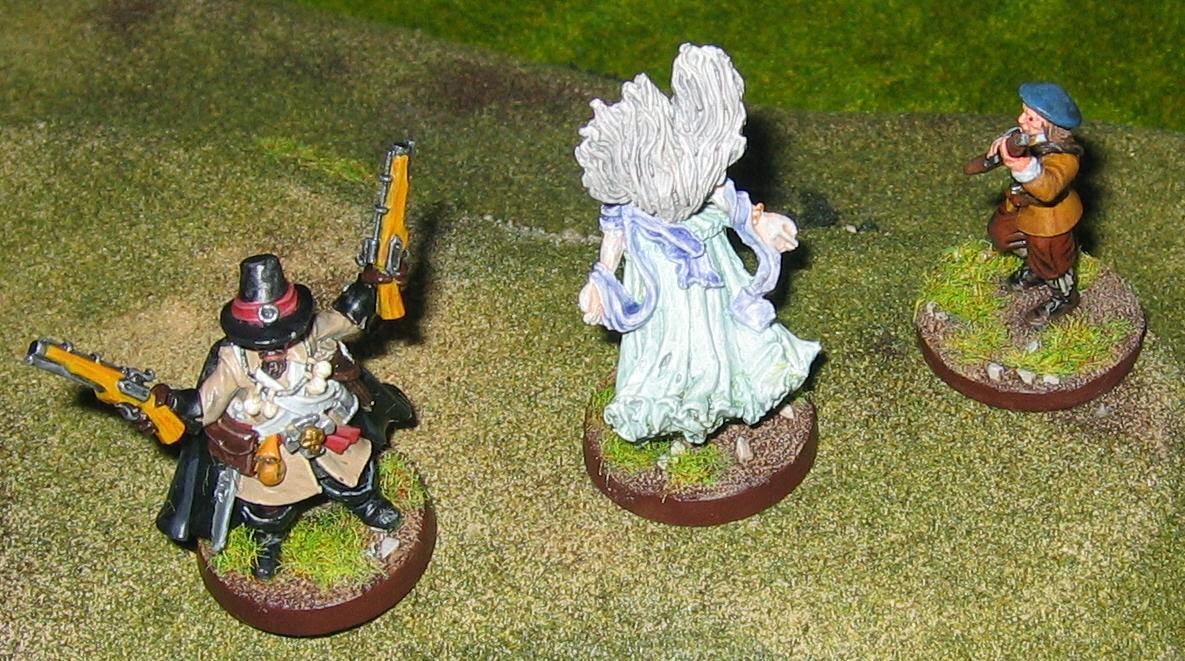 The ghost then turned on one of the other soldiers and gave another terrible shriek.  The man went pale, turned and fled! 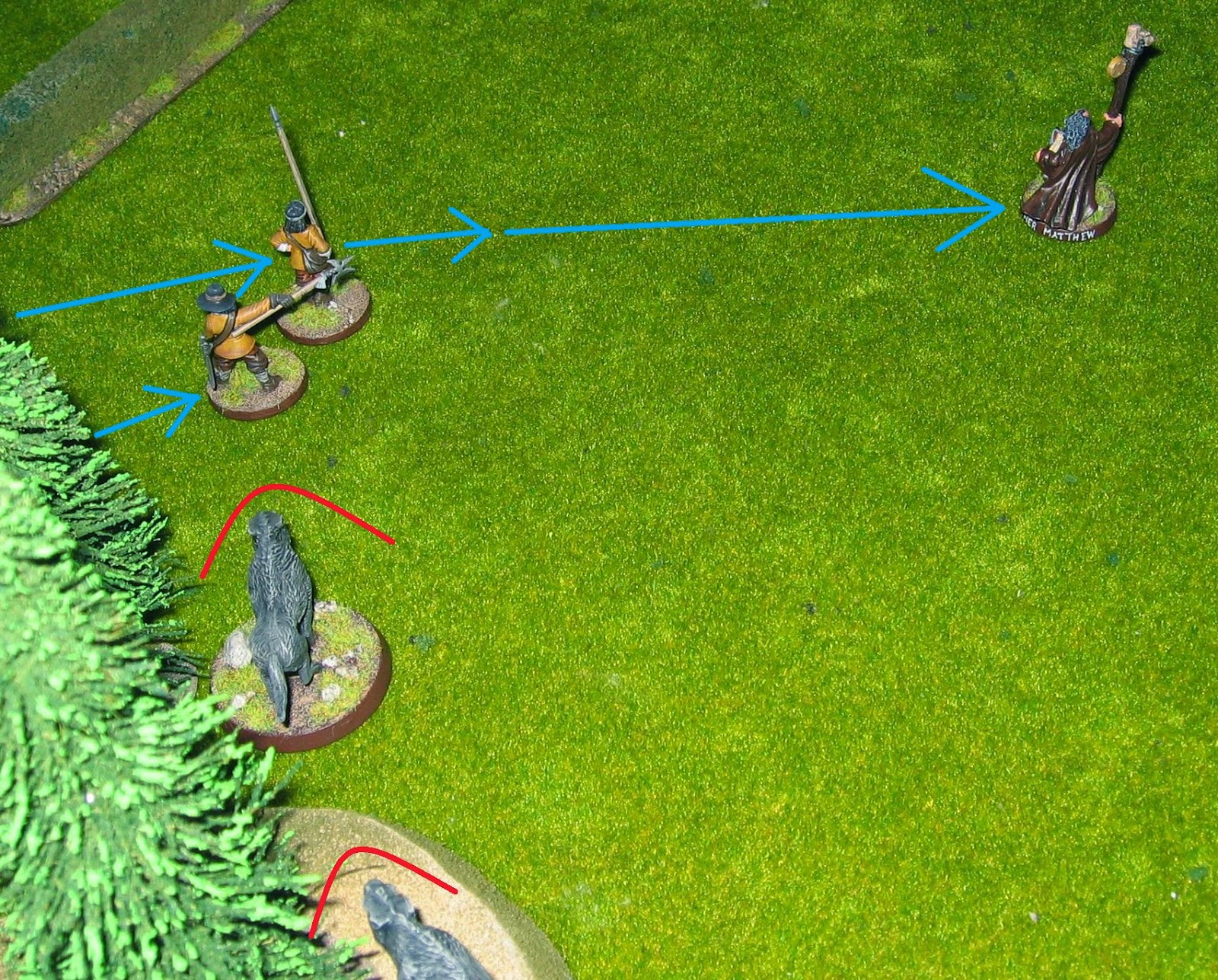 Brother Matthew, the mad monk, ran as fast as he could towards the stone circle.  He was screaming threats, or maybe prayers, and waving his staff wildly.  Because he was frothing at the mouth, he was somewhat incoherent and nobody could work out what he was saying.

The troopers who had been with him followed cautiously.  They hadn't seen what lurked on the other side of the trees, but they were still uneasy and nervous. 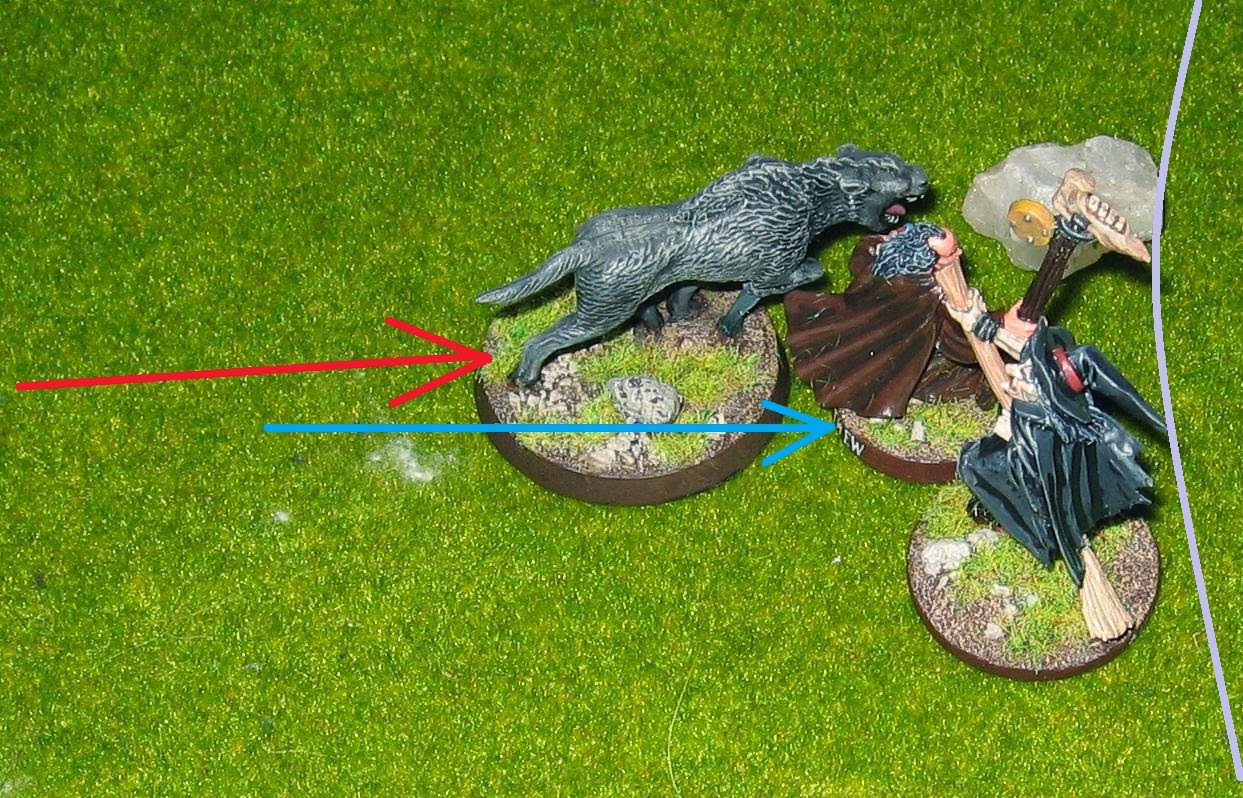 Matthew ran straight for one of the witches in an attempt to prevent her from chanting the horrible ritual.  However, he was followed by one of the hellhounds; the monk had barely reached the hag when he was lifted off his feet and mauled by the monstrous creature.  It scored a gruesome kill on the poor madman but, fortunately for the humans, all of his friends were too far away to see his death in the darkness. 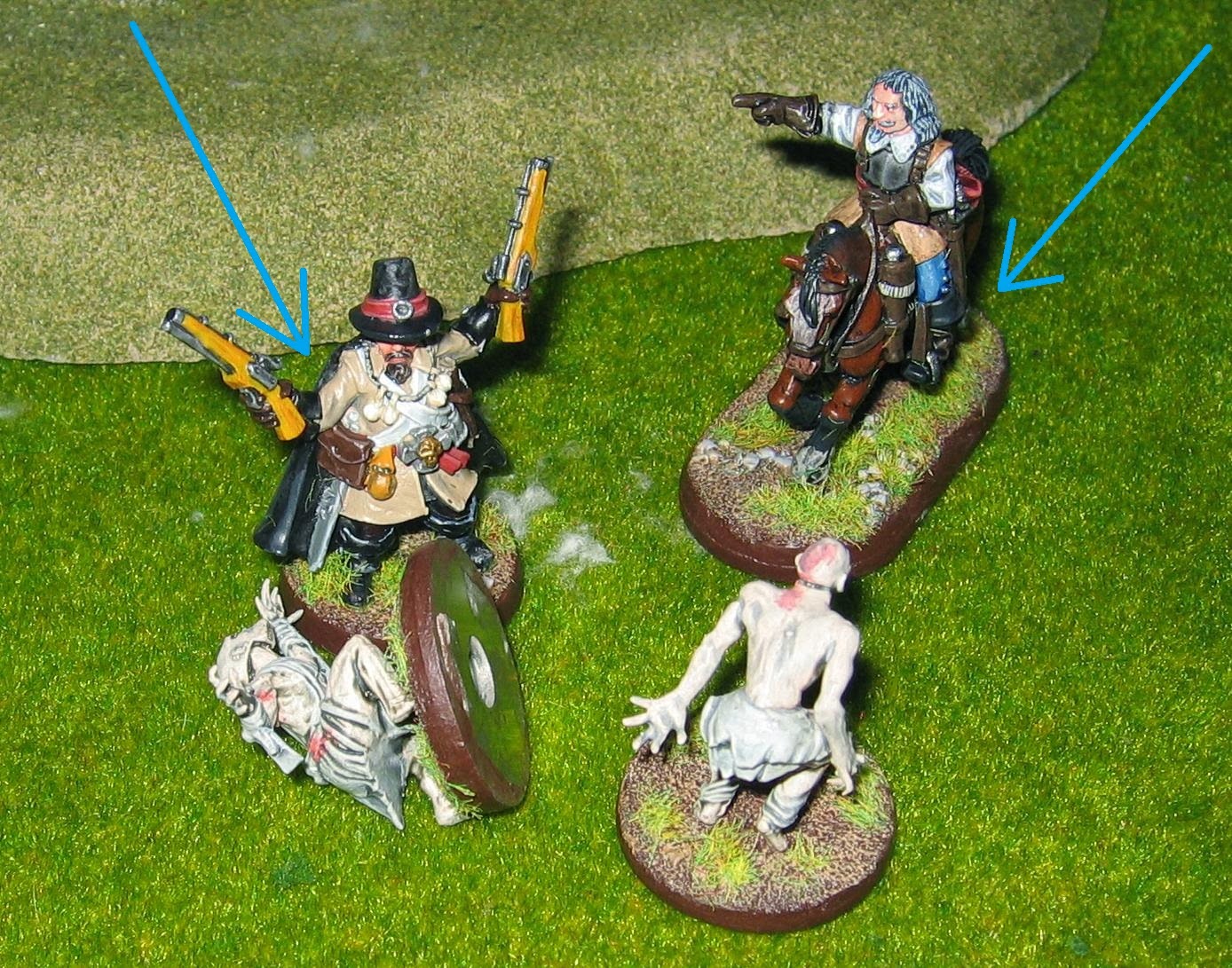 Deciding that the ghost was just a distraction, John Sterne came down off his hill and approached the stone circle from the north-west.  He was joined by Colonel Brandon, who had ranged ahead of his soldiers.  Frustratingly, the men found their way blocked by ghouls who had moved to intercept them.  Even though they were slightly over-matched by the humans, the evil creatures proved remarkably resilient.  Whenever one of the ghouls was knocked down it would just get back up. 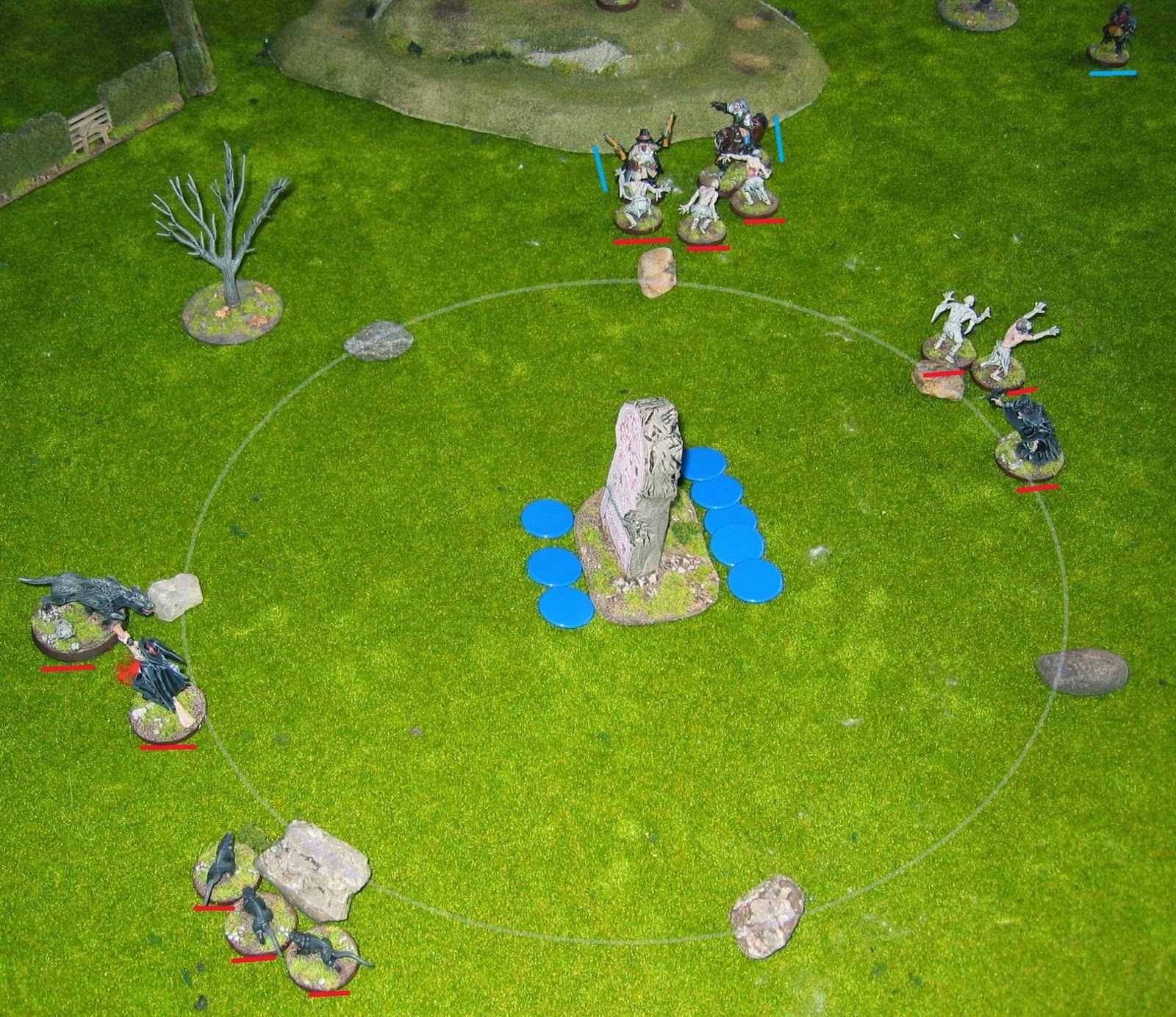 The witches continued to chant their dark incantations, building up the power to a critical level (8 of the 9 necessary points for a summoning).  The monk had died a grisly death, the witch hunter and Colonel Brandon were blocked by ghouls and all the foot soldiers were quite a long way off.  What could the humans do? 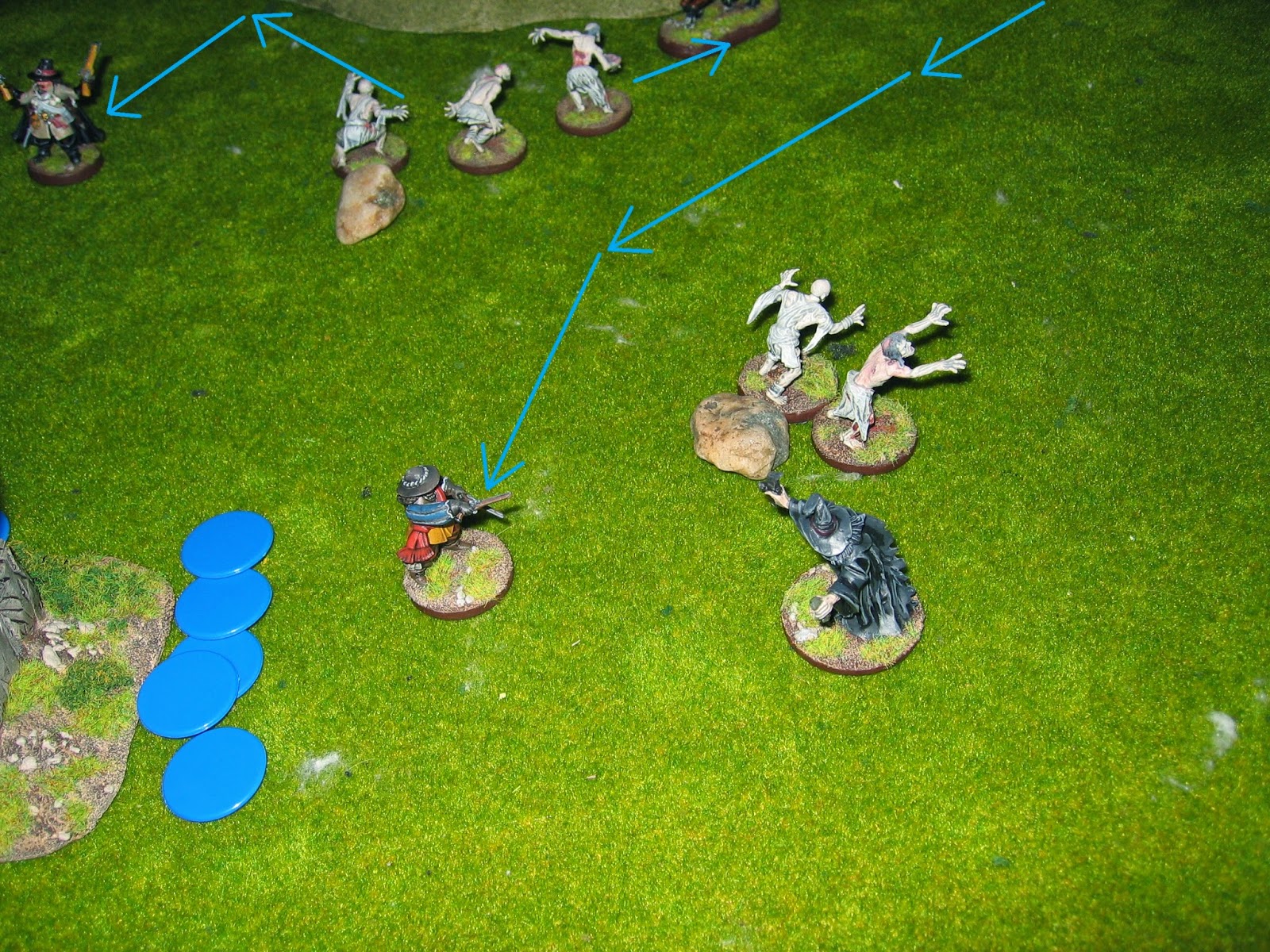 John Sterne and Colonel Brandon both backed away from the ghouls that were in front of them, but neither man was able to get close enough to hinder the black ritual.  Instead, Major Fairfax came running through the night.  He dodged past the waiting ghouls and stood defiantly in front of the runestone at the heart of the circle.  "Hah!" he cried.  "Foul hags!  Your filthy work is undone!"  One power point was dutifully removed from the ritual. 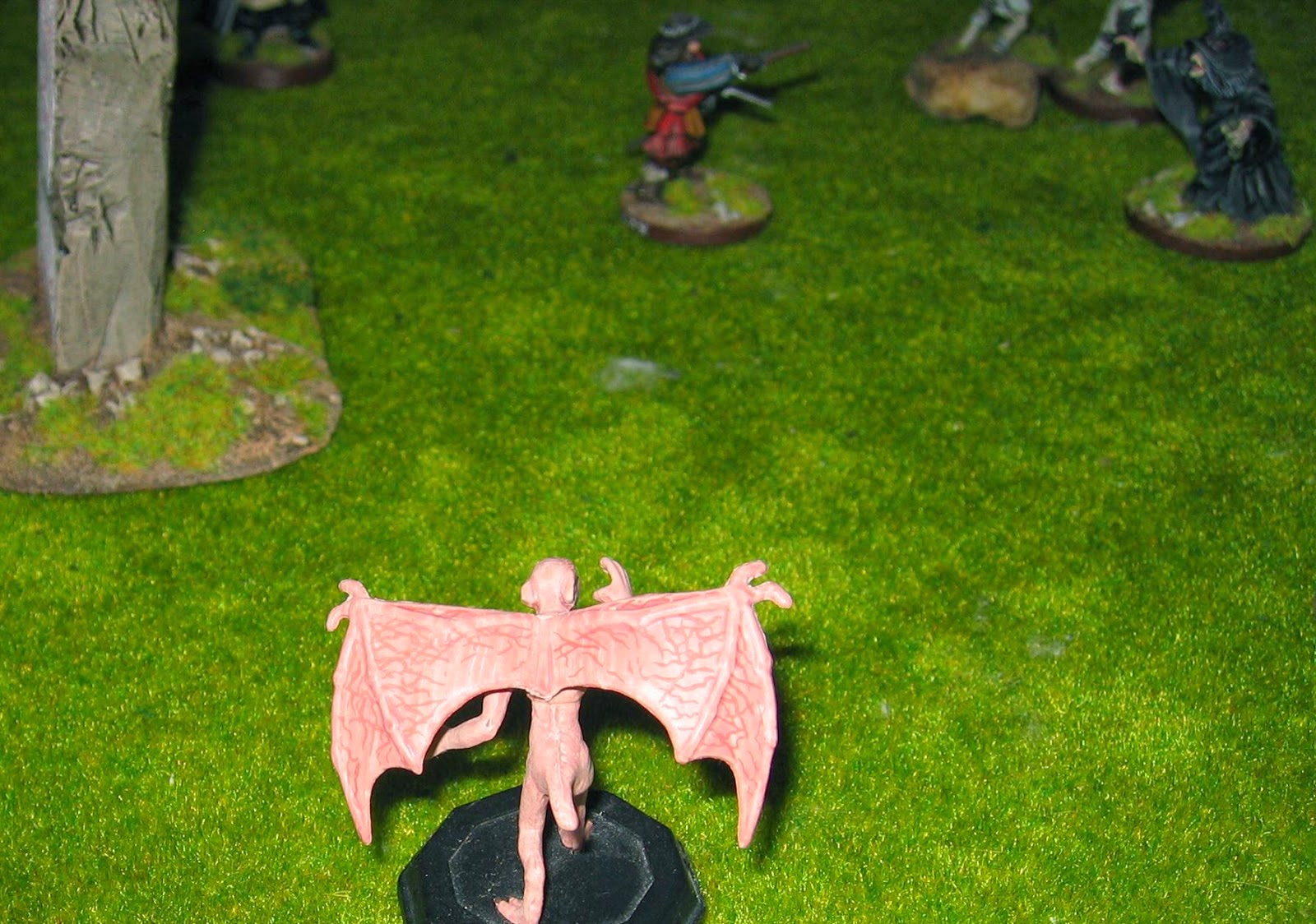 As the major strutted, the witches redoubled their efforts.  Agatha chanted sufficiently to add 2 more power points, thus giving the circle the required charge of 9.  Meg then called on the infernal powers to summon and bind an agent of darkness to her will.  We rolled on the summoning table and got a '2', thus bringing on Asmodai, a Minor Ancient One.  Not the most exciting result, but a demon nevertheless... 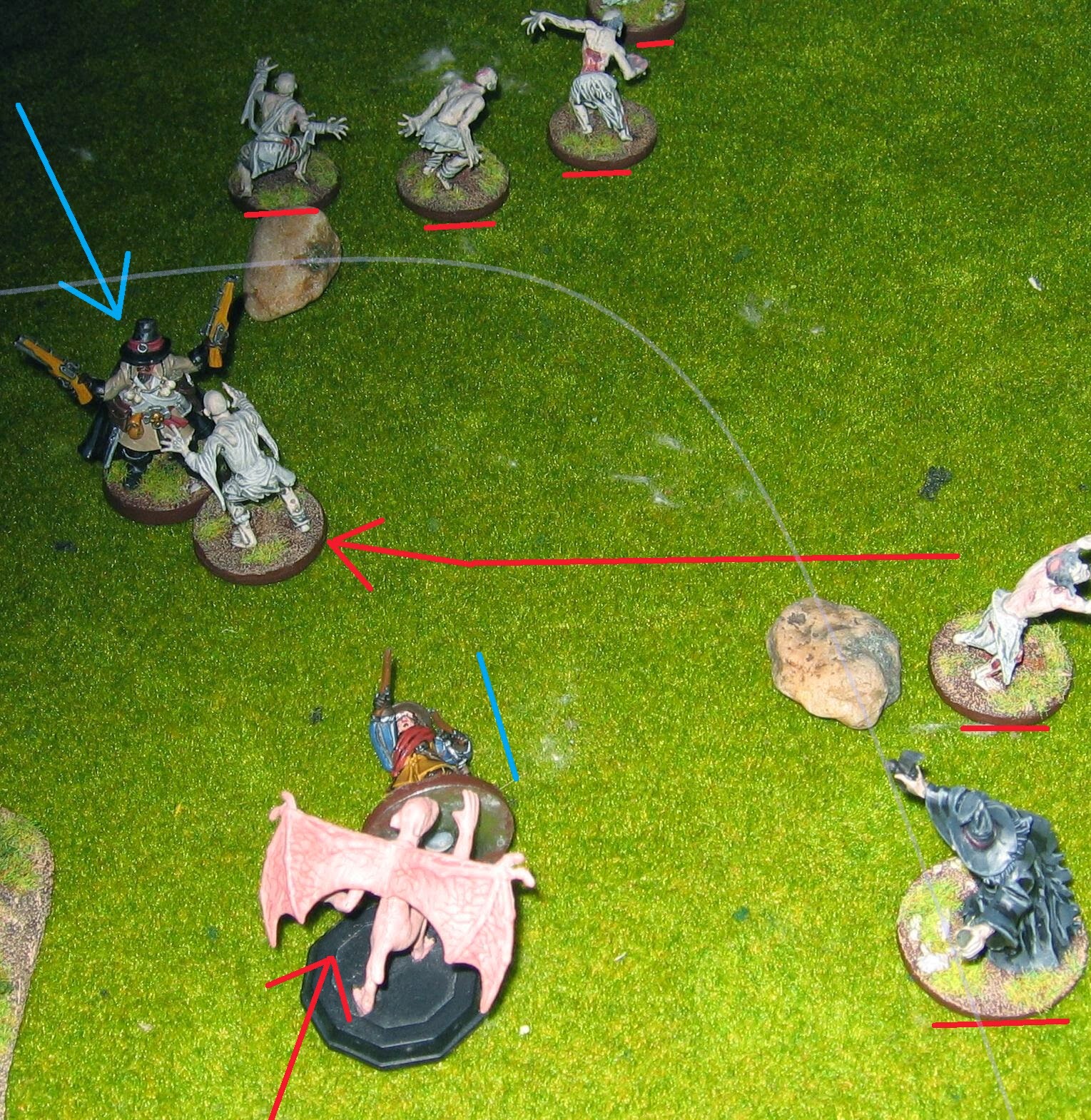 "Oh, CRAP!" the major cried, as the fiend charged straight at him.  He wouldn't get any help from the witch hunter either, as John Sterne was still being obstructed by the ghoul pack.  Mind you, there were now so many figures milling about inside the magic circle that all hope of starting another summoning ritual were abandoned! 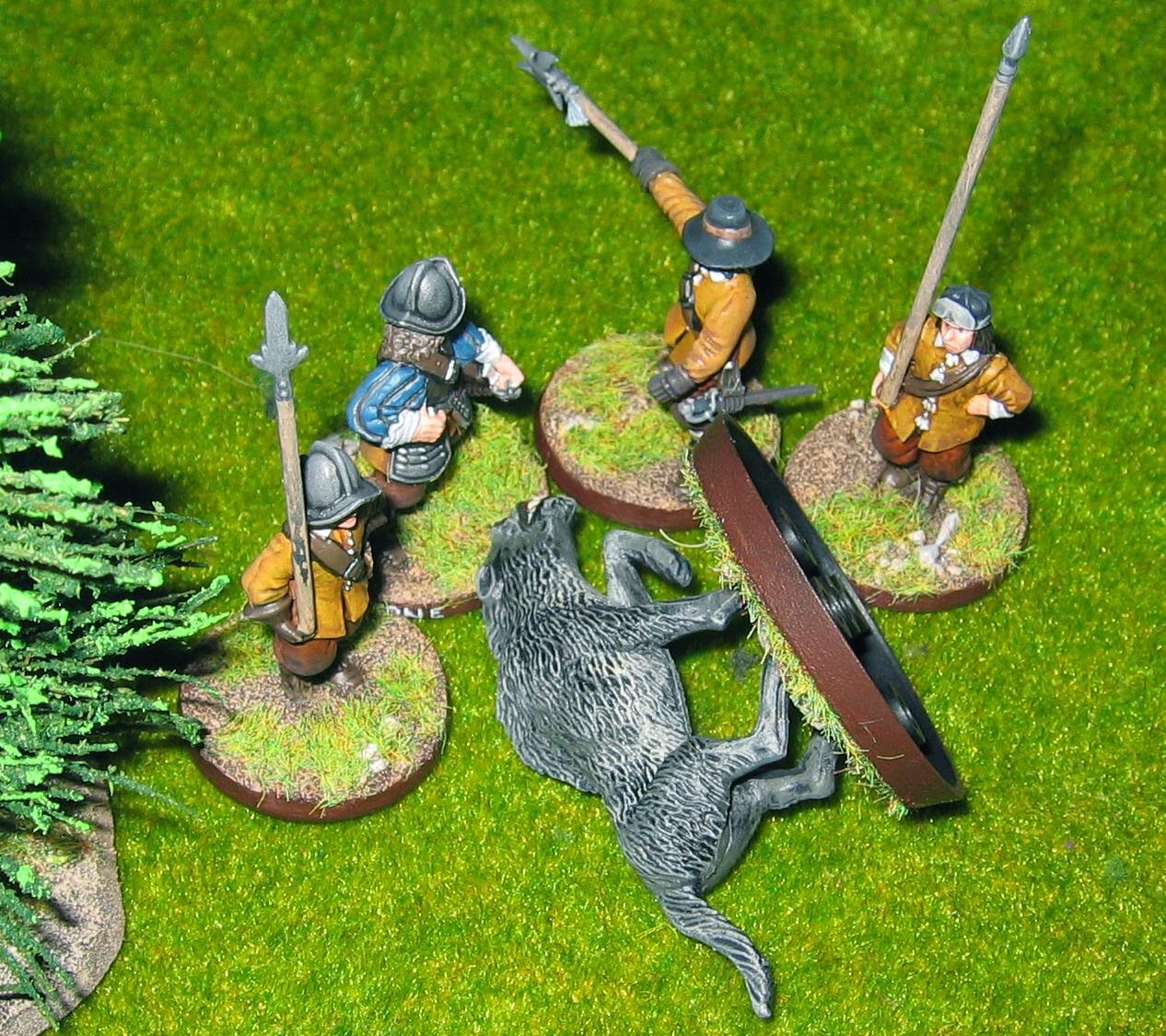 Meanwhile, where were all the soldiers?  Sergeant Stone and his squad had been ambushed by a hellhound as they came out of the woods in the south.  After a long fight in which the advantage swayed from one side to the other, the men eventually managed to knock down and then slay the brute [this was something of a sideshow for us; the figures involved were a long way down the priority list for activations].

The soldiers then jogged forwards towards Agatha.  Their attack was disjointed though, with some men lagging far behind the others.  Sergeant Stone was in the lead but to his dismay he found himself fighting a hellhound all on his own.  Worse, the witch caught his attention and he found that he could not avert his gaze.  As the savage beast tore him apart, all the poor, transfixed sergeant could think was "Those eyes!" 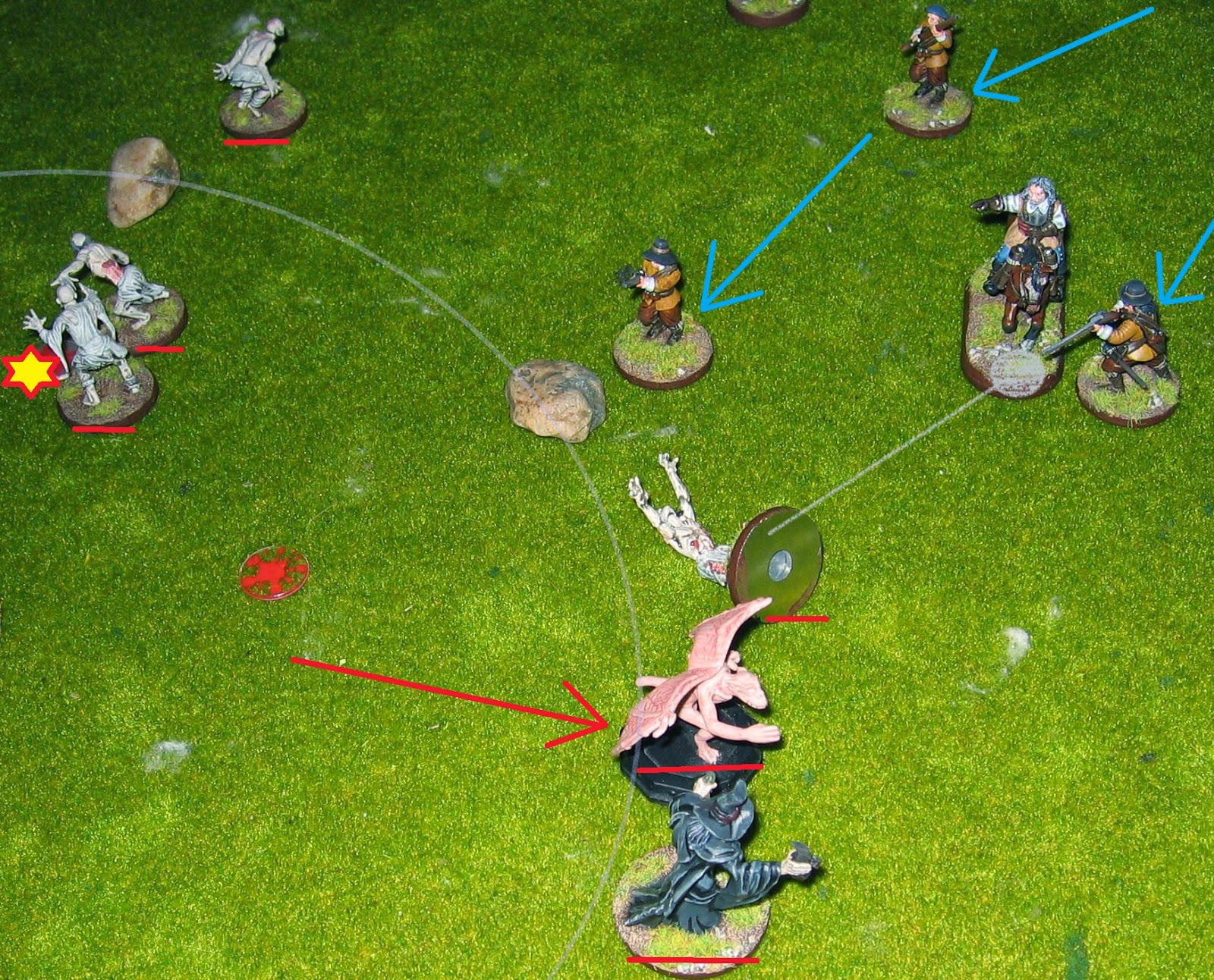 All was confusion in the northern part of the table.  The ghouls finally slew John Sterne and settled down to feast on his corpse.  Indeed, they were completely oblivious to everything else for quite some time after this [i.e. they failed every single activation roll that they attempted for many turns in a row].  The demon killed Major Fairfax, though not without some trouble.

This took the human side perilously close to half their starting strength.  They had lost all bar 1 of their special characters as well as several unnamed soldiers.  If they suffered even 1 more casualty then they would all take a morale test; this would probably destroy any hope they had of continuing to fight.  On the other hand, the witches had only lost one ghoul and a single hellhound!

Colonel Brandon retreated a little, but not from fear.  Rather he was now encouraging his troops; the musketeers fired as they advanced. 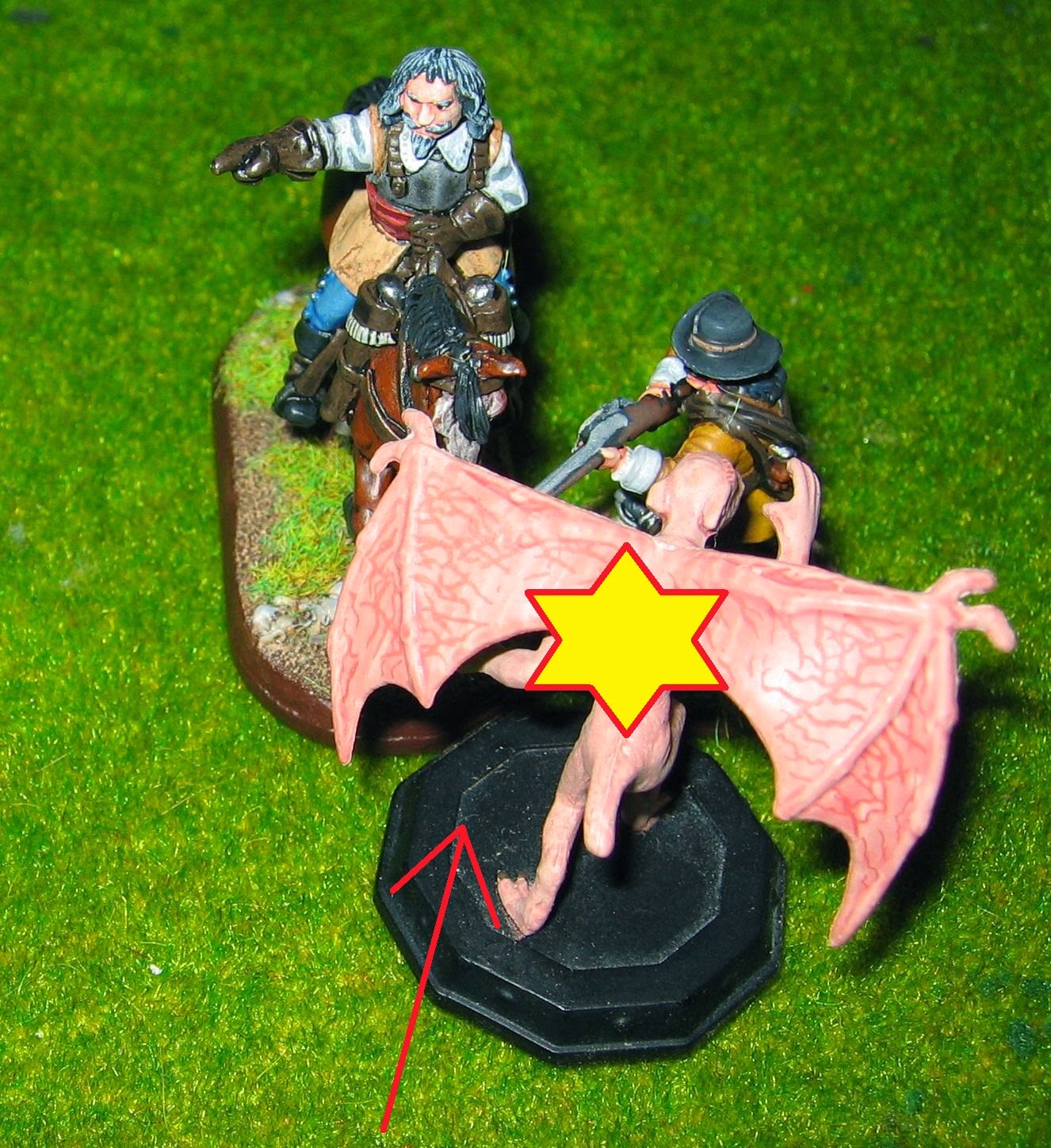 More humans attacking them was the last thing that the witches wanted, so the demon leaped forwards and snarled at the good colonel.  He wasn't having any of that, so he drew a pistol and blew its brains out! 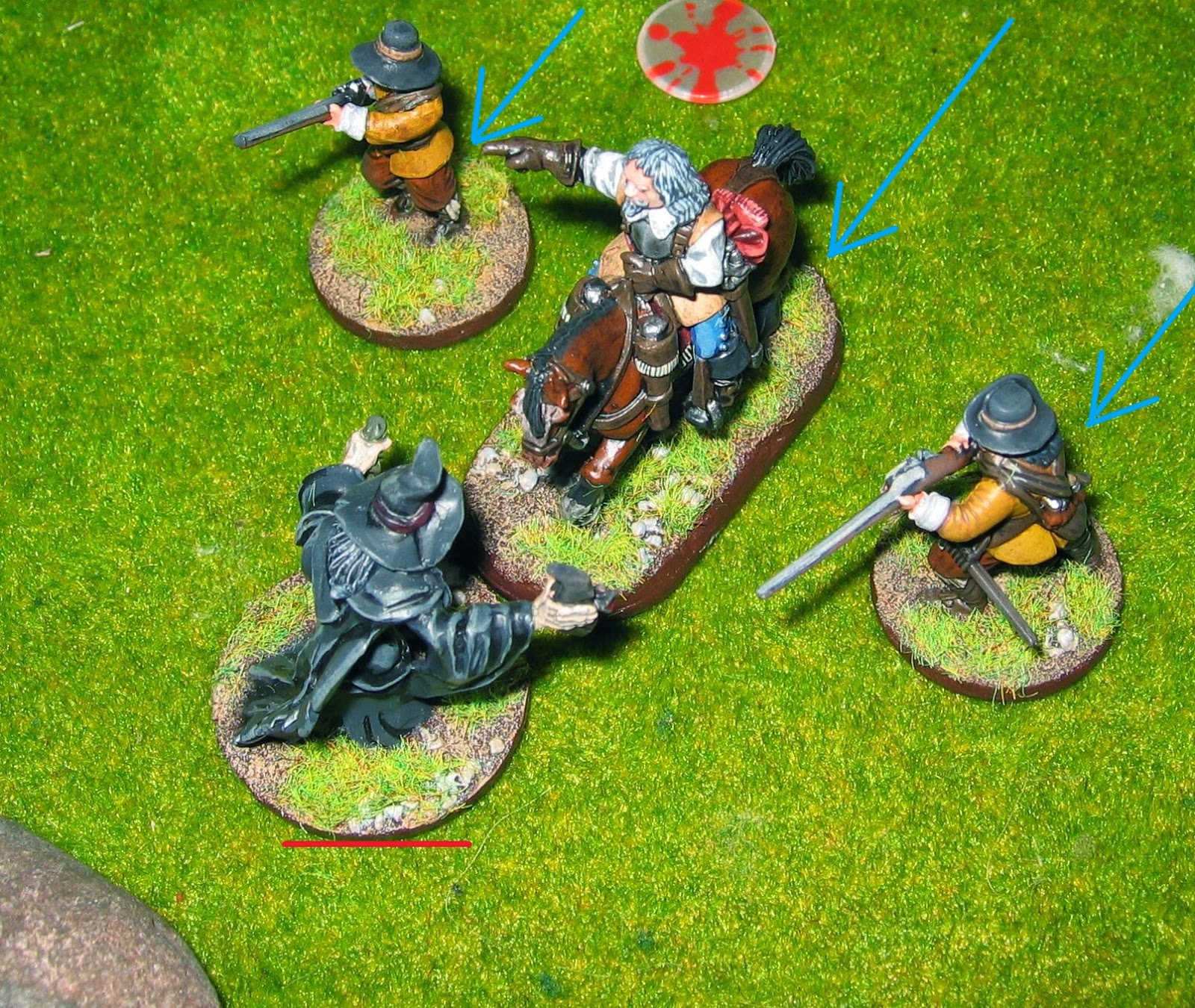 Colonel Brandon followed up by attacking Meg herself, while 2 of his musketeers hovered close by to protect from any marauding enemies.  Despite Meg's screeches for help, the remaining ghouls were still far to interested in their meal and the witch had to fight alone.  With her back to one of the standing stones, she had nowhere to run.  Several times, the colonel stabbed the hag and she fell backwards across the rock, but each time she staggered back to her feet.  Finally, the old soldier thrust his sword deep into her heart and she fell for the last time. 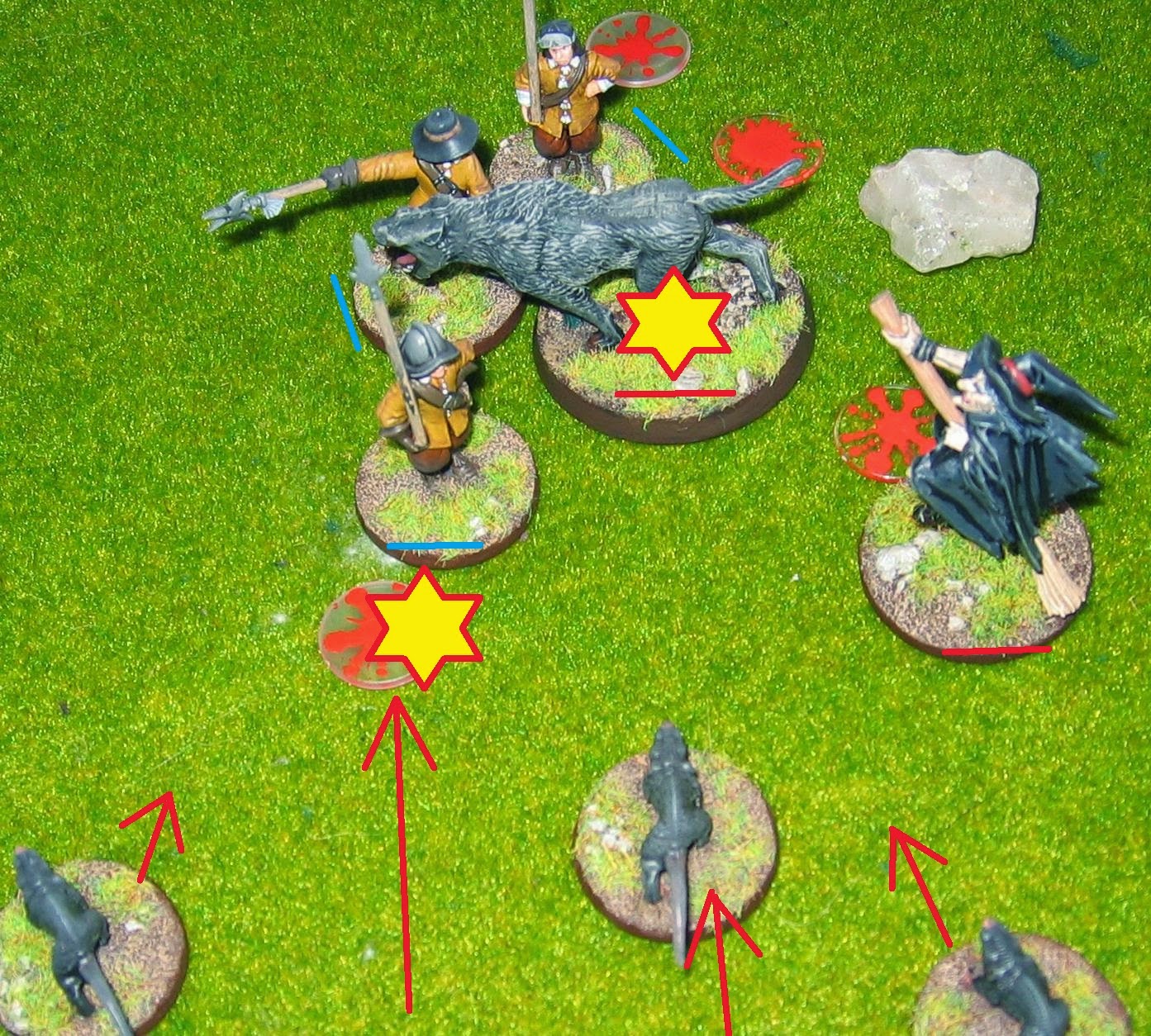 On the other side of the circle of rocks, the soldiers were trying to face down the second hellhound.  Agatha ordered her giant rats to attack the men as well, but this proved to be a bad mistake.  The rodents approached one-at-a-time and the first such creature to come into reach was skewered on a halberd.  It died in agony [another gruesome kill] and its terrible squeals unnerved the hellhound, which then blundered about, trying to flee from the sound.  Escape was impossible: the beast was trapped against one of the standing stones and slain by the exultant soldiers. Seizing their chance, 2 of the men charged straight at Agatha.  The witch wasn't expecting their fierce assault and fell beneath the repeated blows, never to rise again. 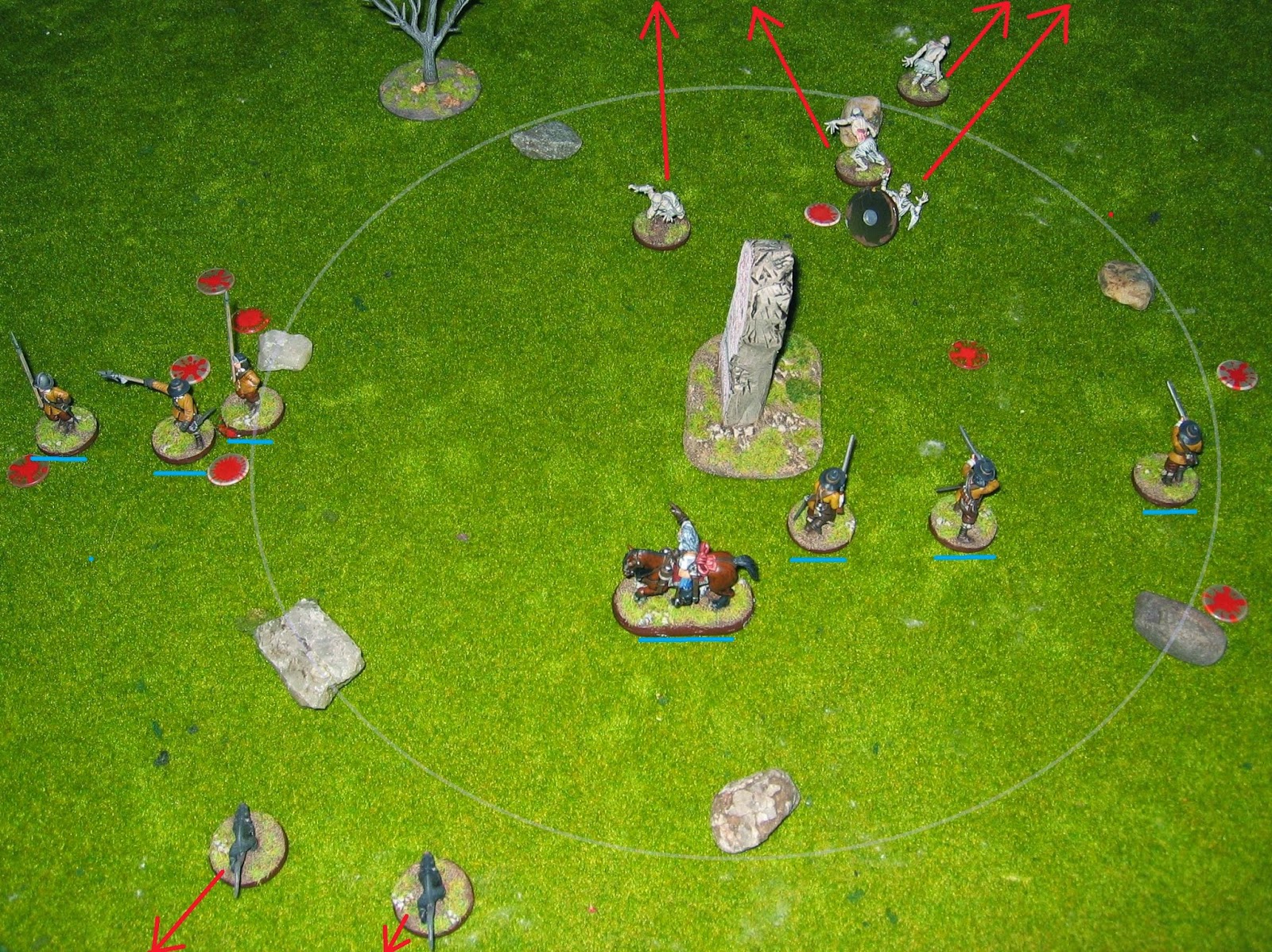 This last loss was too much for the evil side to bear.  Since they were now below half their original numbers, they took a morale test - which resulted in some of the rats running off at top speed.  The remaining ghouls decided that they didn't like the odds any more and slunk off into the night.  Only the ghost was left, endlessly drifting about the hills and fields...

That was a fascinating and very eventful game!  It went very much in the witches' favour to start with, but the humans made an amazing comeback.  When we added up the victory points at the end, we came up with these totals:
So, it's a draw!