Robin Hood and the Abduction of Marion 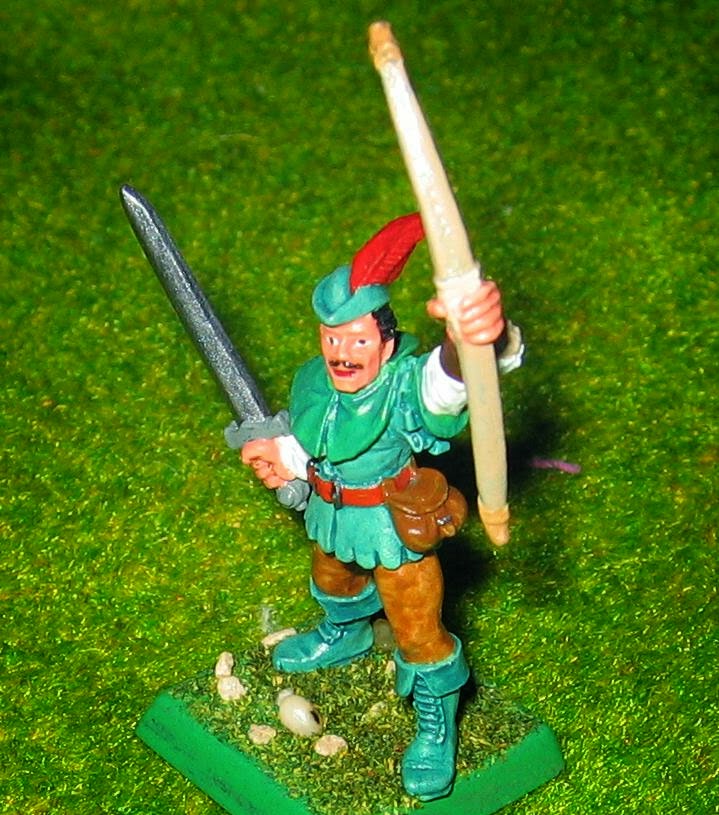 A little while ago, I published a Song of Blades and Heroes battle report entitled "Robin Hood and the bishop of Lichfield".  It was always my plan to play more games in this setting, so here is another one.  Actually, we played the scenario twice, since the first game was very short.  Read on to find out what happened...

The Sheriff of Nottingham and his dastardly men have taken Maid Marion prisoner.  It's not important for the game how this occured - perhaps she was hiding out in a local nunnery, or maybe she was in disguise and visiting a sick aunt.  Anyway, Robin Hood has heard about this and is giving chase through the forest, along with some of his men (the others are away on a raid elsewhere in the county).  If the Sheriff can just drag his captive to within sight of the town of Nottingham then Robin's band won't dare to follow any further.  Will Robin catch up and rescue the lady?  Or will the Sheriff succeed with his nefarious plans?

We decided to play the Kidnap scenario from Song of Arthur and Merlin.  Roughly speaking, one warband has captured someone important and must escort their prisoner from one side of the board to the next.  They have a 1-turn head start over the rescuers, who are pursuing them.  One figure from the kidnapper's band must spend an action every turn to keep the captive under control; a second action may then be used to move the prisoner and captor together.  If the captive ever becomes uncontrolled then the rescuers may move that model as part of their warband - if thy make the requisite action rolls, of course!

Victory is determined as follows: 5 victory points to the kidnappers if they move the captive off the far table edge, or to the rescuers if they move the captive off any other table edge.  1 VP is also scored for each 50 points value of enemy figures lost.  Since we were playing with 400 point warbands, this would give an absolute maximum of 8 points in the unlikely event that the enemy's warband was slaughtered to a man.  The fate of the captive was more likely to determine who won the game!

(Sadly, I didn't have enough personality points to field both Robin Hood and Little John - Robin is a very expensive character!  I suppose that Little John is leading a different search party somewhere else)
So, Robin and his band are outnumbered by about 2:1 .  On the other hand, most of his opponents are rabble; these are much easier to scare off or kill than normal. 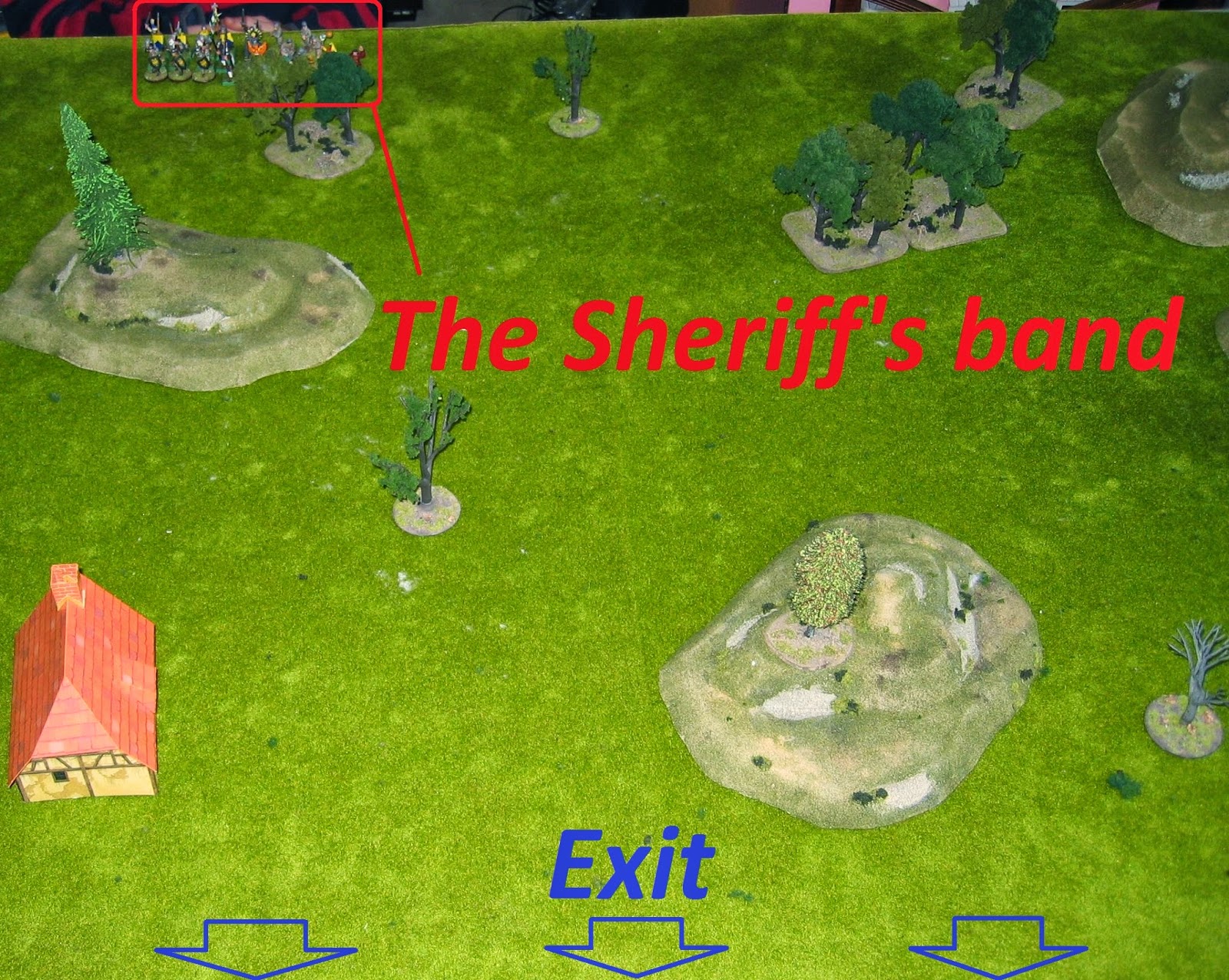 In the first game of the afternoon, the Sheriff (my youngest son) chose to bring on his band of ne'er-do-wells in one corner of the table and advance down the edge. 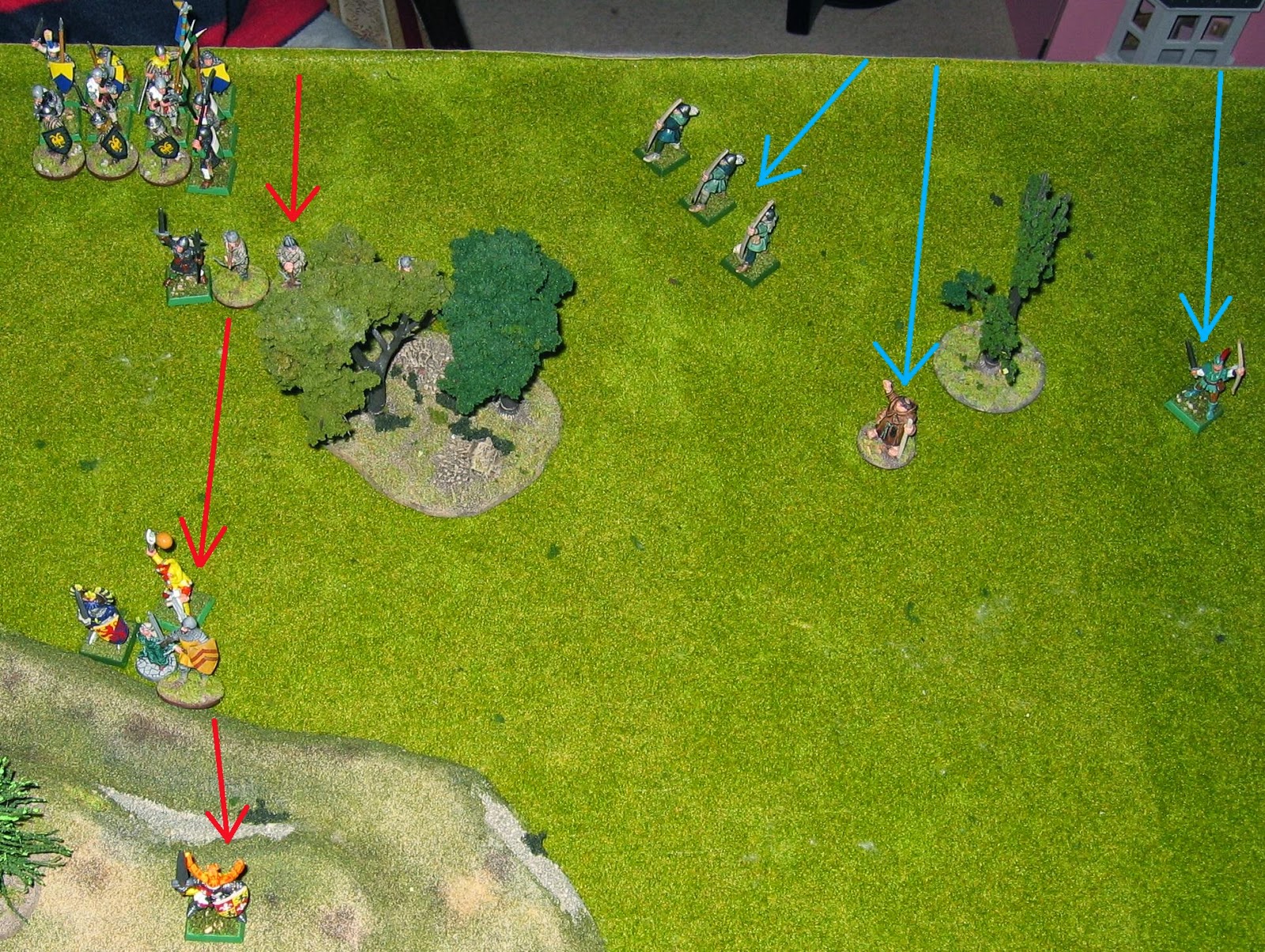 Guy of Gisborne scouted ahead, whilst the other knights and the jester dragged Marion forwards.  The Sheriff started marshalling his crossbowmen behind a small clump of trees, whilst most of the men-at-arms didn't move.

It proved remarkably difficult to bring any of the rescuers onto the table at all [the Song of Blades system allows you to roll 1, 2 or 3 dice per figure for actions - but if you get 2 failures then your turn is over.  I tried rolling 2 dice usually, but had a stunning number of double failures].  After 2 turns, only 3 outlaws, Friar Tuck and Robin Hood himself had arrived.  Rather than bring them on close to the mass of men-at-arms, I chose to try to outflank them and run for the knights and the prisoner. 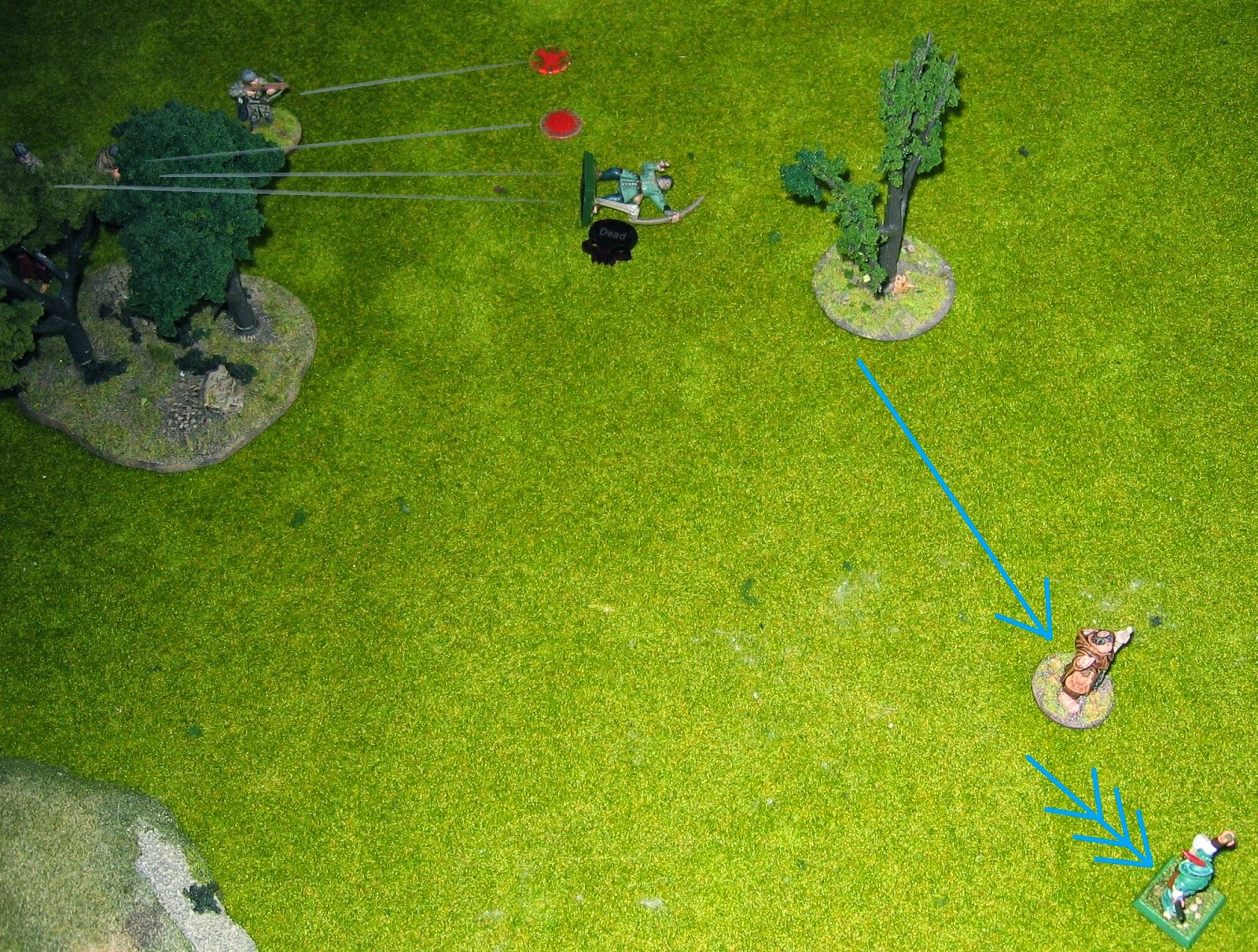 With the Sheriff encouraging them, the crossbowmen shot bolt after bolt at the nearest outlaws.  Over the course of 2 turns, they killed 2 of them outright.  Then, the 3rd man slipped over whilst dodging one bolt only to be hit by another missile in a very sensitive place.  He writhed about the ground screaming, before collapsing to the ground in a fountain of blood [i.e. a "gruesome" kill].

The poor outlaw's horrible death unnerved Friar Tuck; he took a few steps away from the grisly sight.  Robin Hood also had to take a morale test [because he was within "Long" distance of the kill (just)].  It shouldn't really have been a problem, but he rolled 3 failures and promptly legged it off the board.  Oh, man!  How could I possibly recover from this - I don't think that Friar Tuck was going to tackle all of the baddies on his own and even if more Merry Men had arrived, there was no certainty that they could catch up with the prisoner or overcome the escort.  Game over, man! 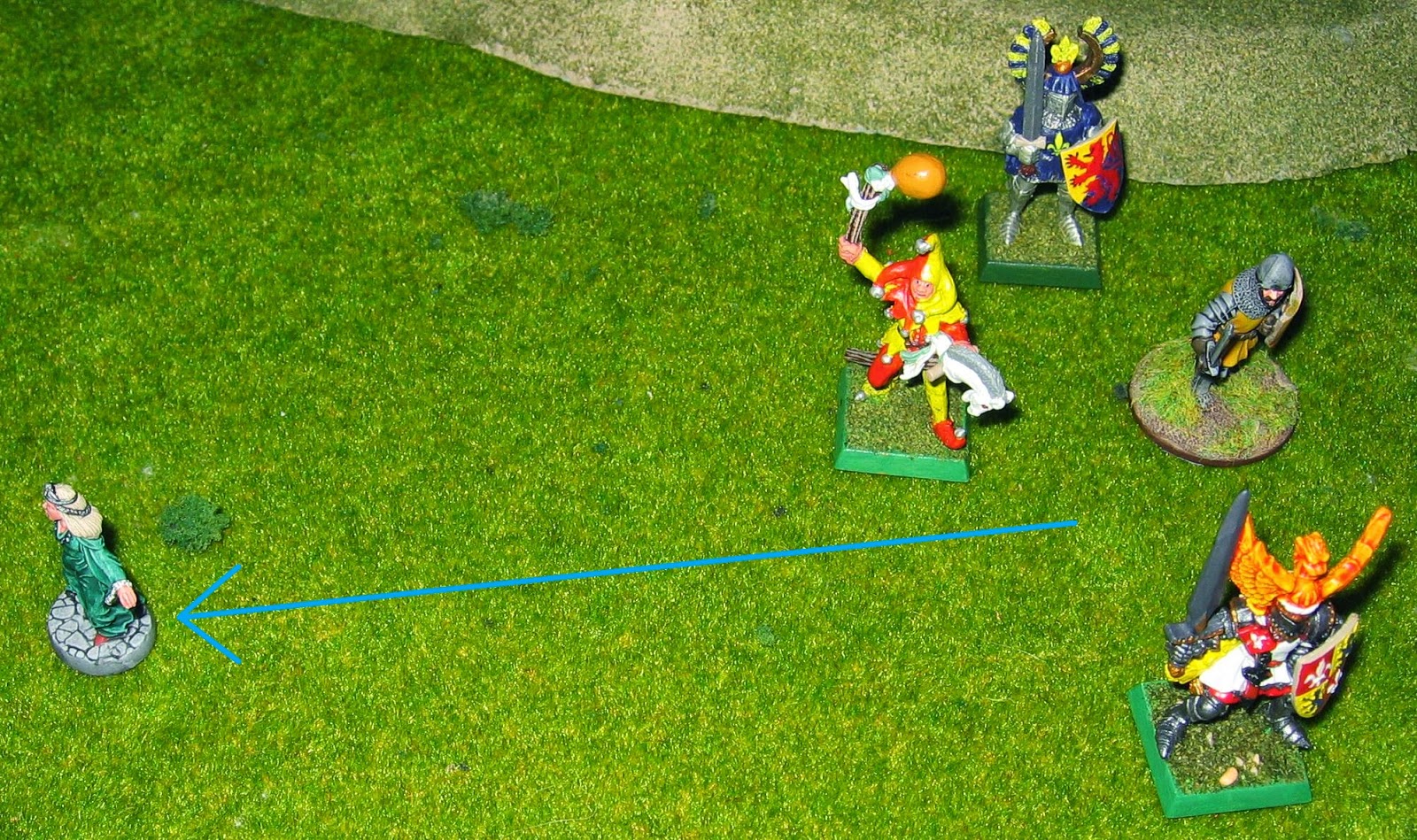 In the excitement of shooting down the outlaws, the Sheriff hadn't yet spent an action to keep the prisoner under control.  The last crossbowman rolled 2 activation failures; thus signalling the end of the turn for the kidnappers.

As the knights jeered at the famed Robin Hood for running like a bunny rabbit, Maid Marion slipped from Sir Walter's grasp.  She immediately ran in the opposite direction [Marion activated on a 5+ and was 2 moves away from the side edge of the table.  If I could roll 2 activations out of 3 dice then she was off and safe - but I only rolled 1]. 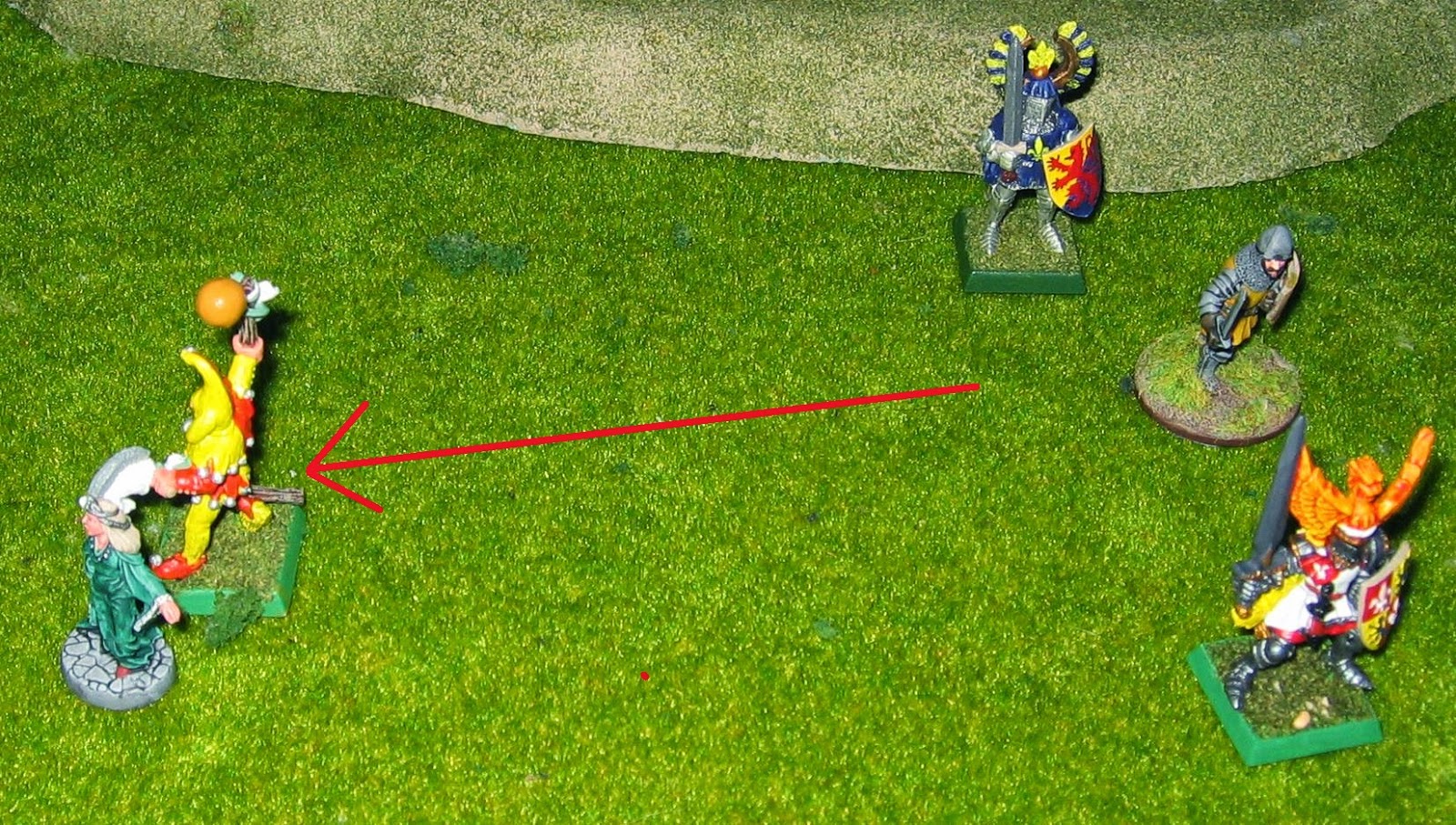 Only Yorik, the jester, was quick-witted enough to grab for the fleeing damsel.  He almost had her, but was then wrong-footed by a sudden jink.  Maid Marion disappeared into the edge of the dark forest and was lost to sight within moments [At 3+ activation, Yorik had a good chance of recapturing the prisoner; he would need one move to reach her and a second activation to subdue her.  However, out of 3 dice he only threw 1 success, thus allowing him to draw level but also signalling the end of the baddies' turn for the 2 failures.  Marion then took another turn, threw 3 successes out of 3 and ran like the wind off the table edge].

Well, that was unexpected.  Final scores: 3VP to the Sheriff for vanquished foes, but 5VPs to the Outlaws for a prisoner escape.  Victory to the Merry Men!

Whilst it was satisfying in some ways, the first game was over so quickly that we had enough time to play the same scenario again. 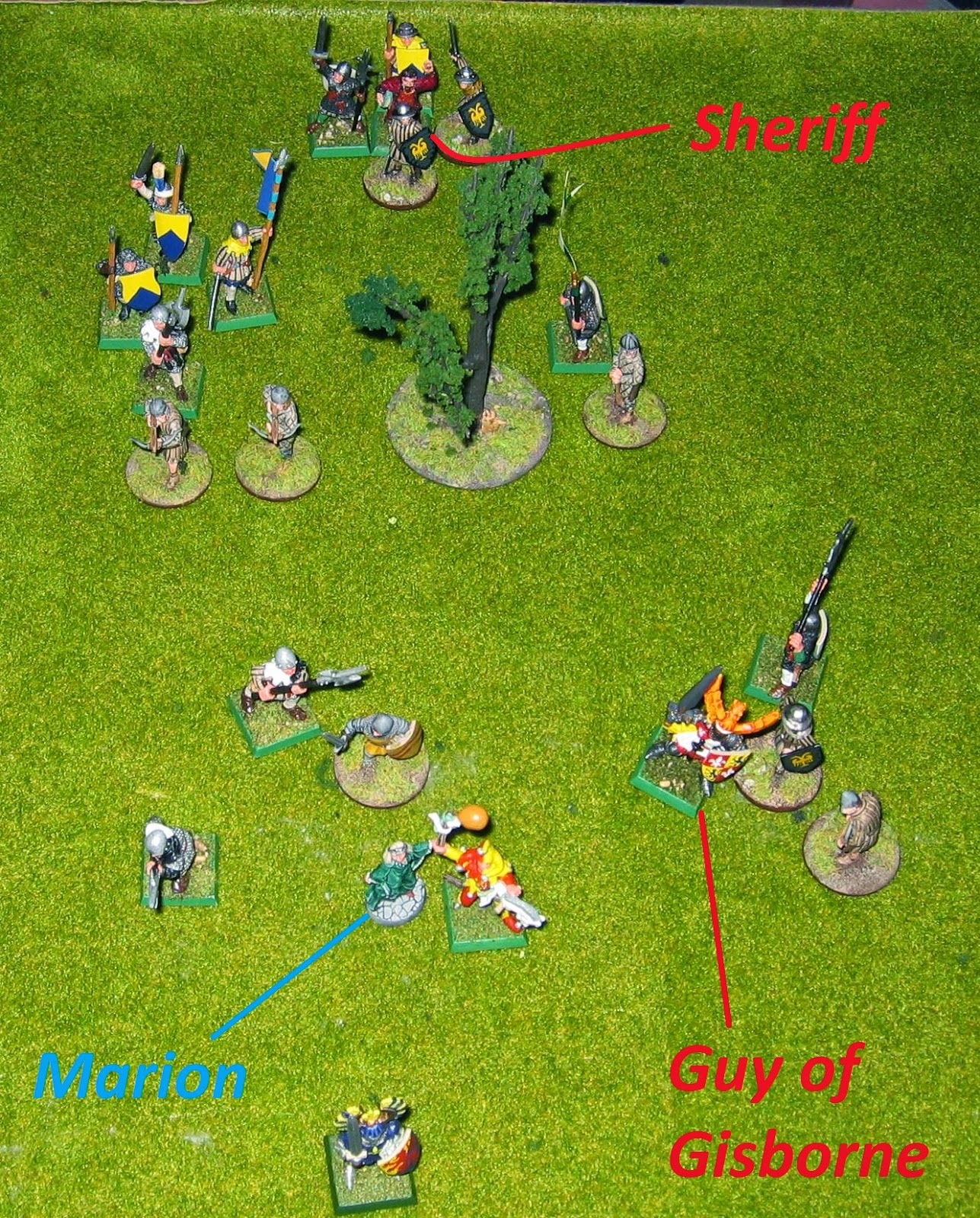 This time, the Sheriff's men entered the table rather more in the middle of the edge.  Even if Marion managed to escape, she would have much further to go to reach either side [and with only a 5+ activation, it seemed unlikely that she'd make it without being recaptured].  Also note that both she and the Sheriff were surrounded by soldiers - my son wasn't taking any chances with his 2 most valuable models! 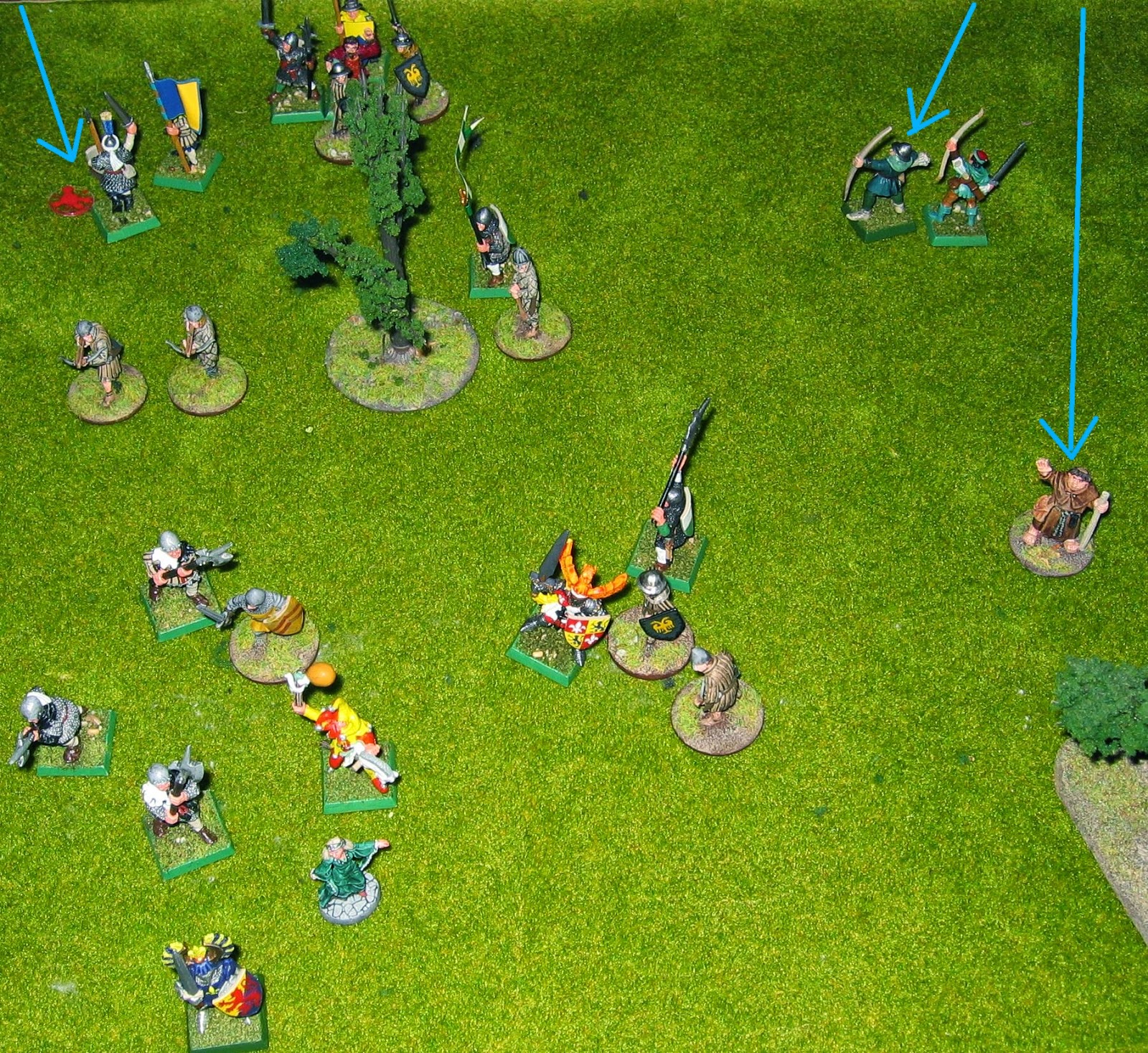 Again, the Merry Men were slow to arrive - and when they did come on, it was in dribs and drabs.  One outlaw fancied his chances in hand-to-hand combat against the Sheriff's rabble, but was quickly dispatched.  The others tried to keep moving parallel to the kidnappers whilst waiting for reinforcements to arrive.  Marion did indeed struggle enough to break free when she saw Robin arrive, but she was quickly surrounded and caught again. 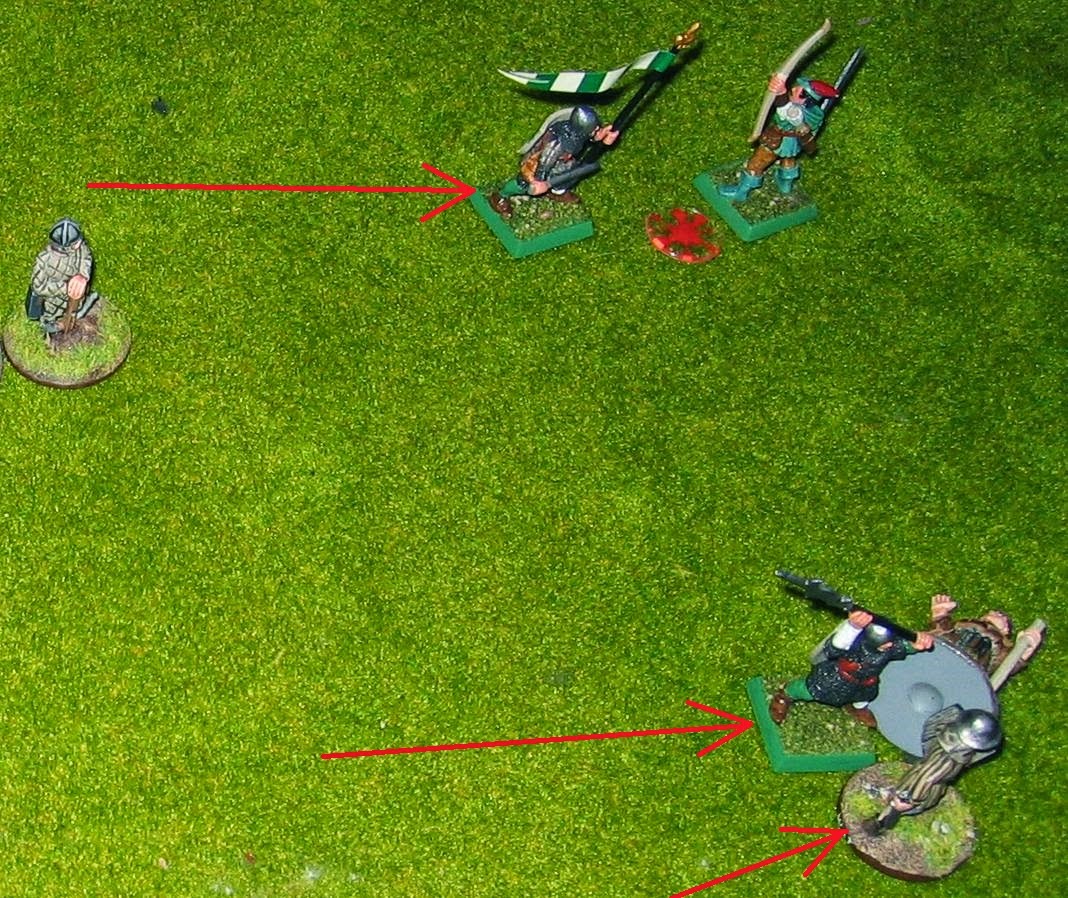 In a surprisingly aggressive move (or perhaps it was a cunning delaying tactic?), the Sheriff sent small numbers of men-at-arms to engage the would-be rescuers, whilst the knights and the jester dragged Marion further across the board.  Initially, the rabble had some success: the standard bearer killed one Merry Man and the other 2 soldiers had Friar Tuck on the ground and in trouble. 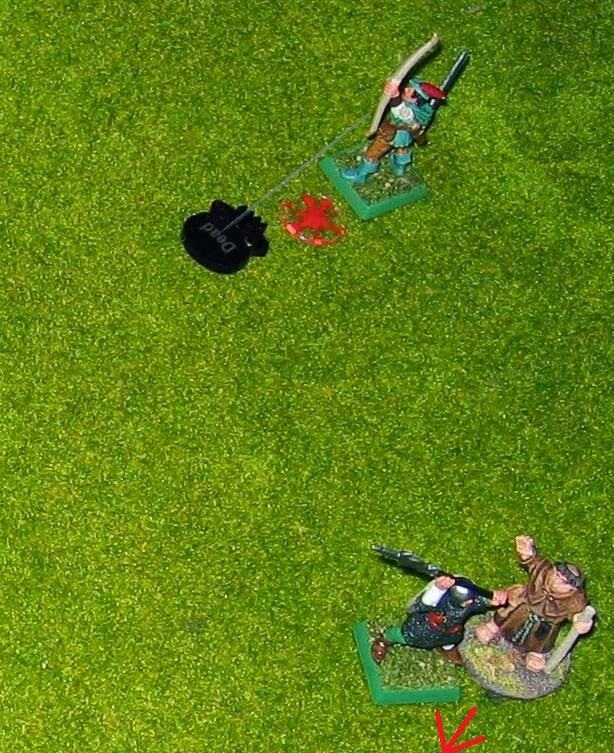 With a flashy piece of archery, Robin shot down the standard bearer [another gruesome kill].  One of the men who was attacking Friar Tuck fled at the sight, though the other wasn't so easily impressed.  Still, this did allow Tuck to regain his feet.

However, the reprieve was temporary.  With a howl of fury, Guy of Gisborne charged the poor friar and swept his head from his shoulders with one mighty blow [gruesome kill, again!].  Robin Hood was so taken aback at the fate of his friend that he retreated a few paces.

Guy followed this up with a ferocious charge at Robin, pushing the outlaw back until he was almost off the table.  This was his undoing however; the moment there was a slight gap between them Robin put 3 arrows into the knight in quick succession.  Guy's armour wasn't enough to save him from the master bowman; he sank to his knees and was out of the fight.

Meanwhile, the lesser knights and the jester, encouraged by the Sheriff, were crossing the table alarmingly fast.  The Merry Men really couldn't afford to hesitate if they were to have any chance of rescuing Marion. 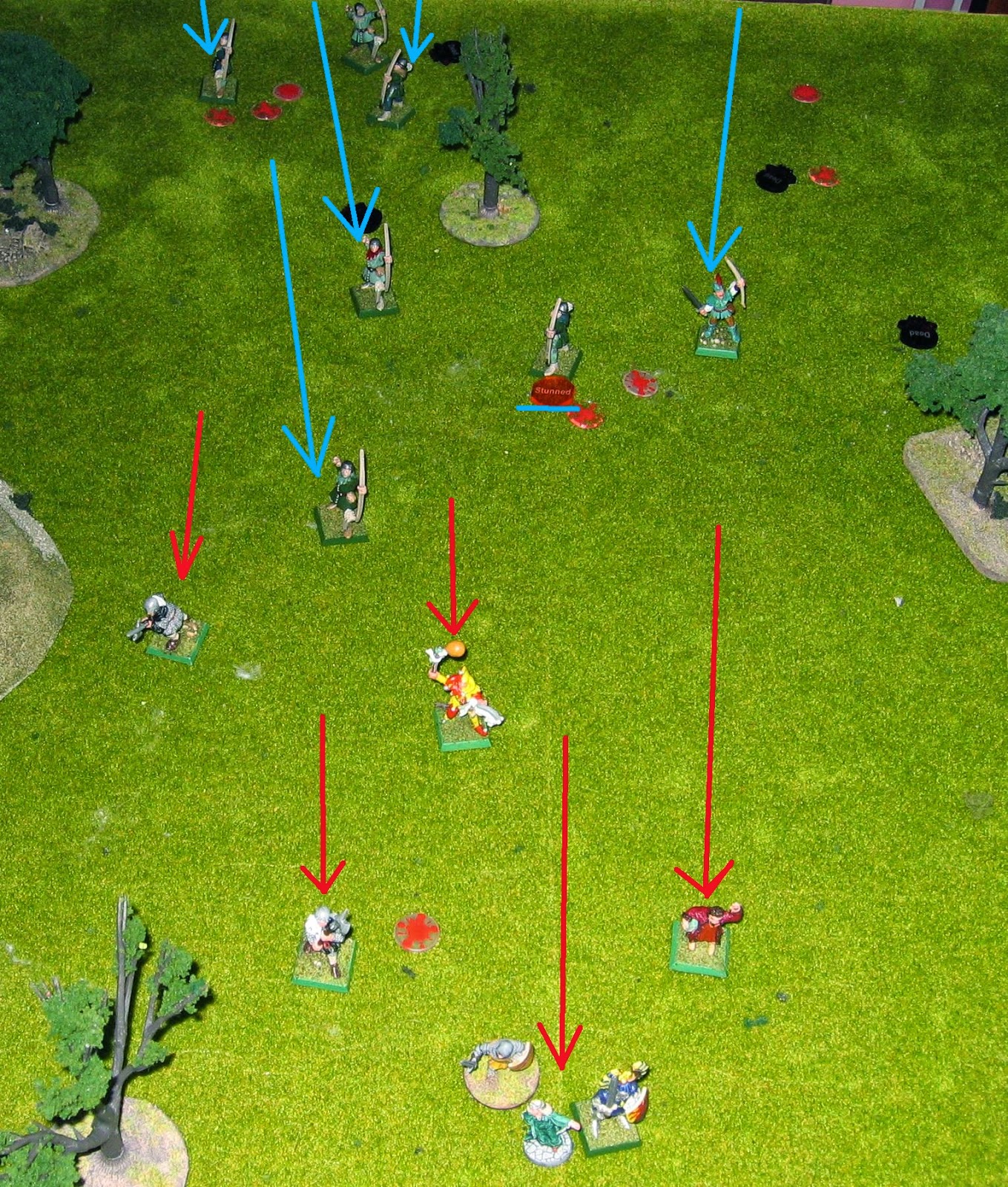 While Guy of Gisborne had been on his rampage, more outlaws had arrived on table.  The strung-out men-at-arms had attempted to stop them on occasion; sometimes they had succeeded in delaying the Merry Men for a while, but in the end they mostly died or ran away.  The Sheriff didn't have many men left, but the knights were close to the table edge with the captive.  Could they drag Marion away before Robin could rescue her? 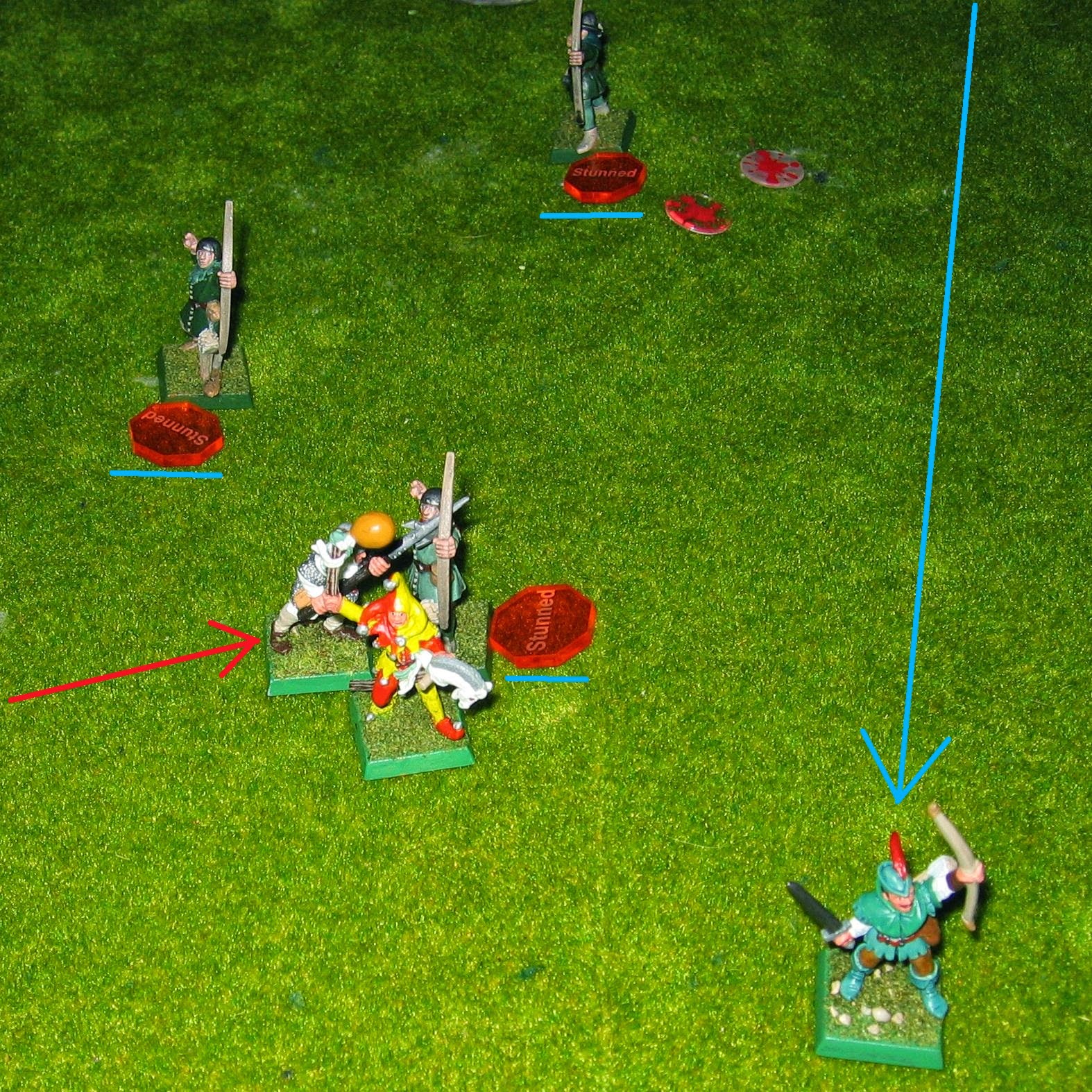 Yorik the jester was now the rearguard; he had considerable success in distracting the pursuers with his tricks and jokes.  Robin ran as fast as he could, ignoring the sideshow and firing occasional long-range arrows at the sheriff - but the kidnappers just had too great a lead. 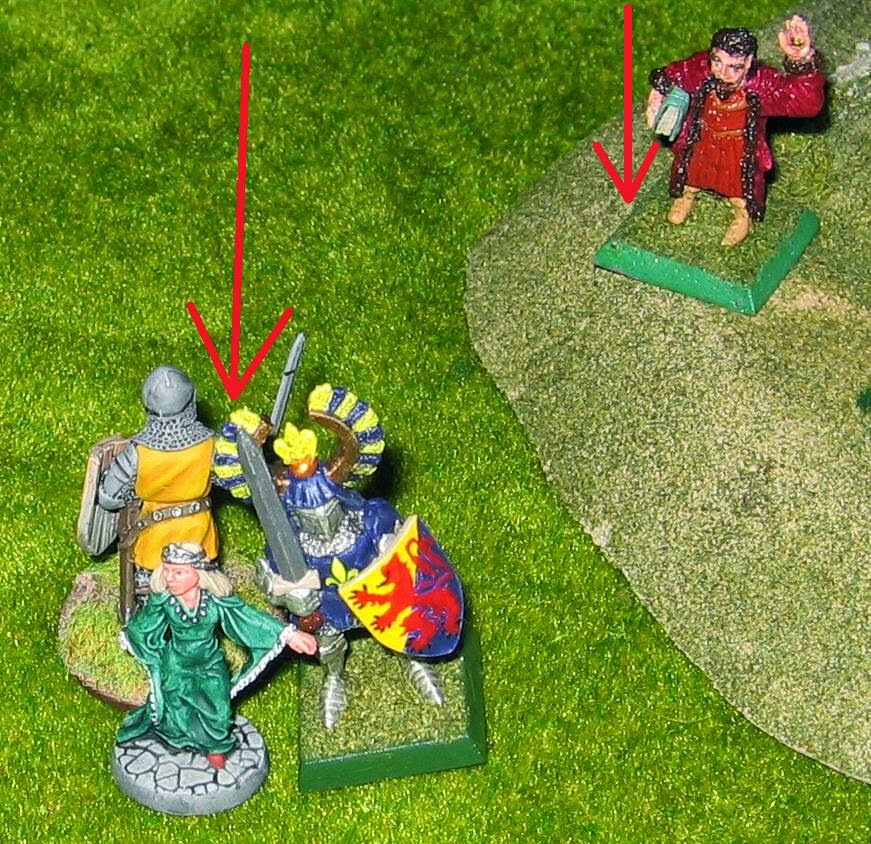 Sir Stanley kept firm hold of Marion, whilst Sir Walter protected his back and the Sheriff of Nottingham encouraged them from the side.  Robin could do nothing to prevent them from escaping, as Marion was dragged away, biting, kicking and cursing in a most unladylike manner!

This was a very interesting scenario and one that was quite difficult for the pursuers.  In both games, the Sheriff's Leader ability was critical, mainly for the +1 Quality for activating nearby followers but also for the ability to issue group orders.  He was able to keep the kidnappers moving fast and while Robin and his men dispatched hordes of goons in the second game, they were delayed just enough that the captors could escape.