A couple of weeks ago, at Salute 2014, I bought a couple of bits of terrain from a company called Amera Plastic Mouldings.  They make vacuum-formed pieces and while this technique limits the sharpness of detail that can be achieved, their terrain is incredibly cheap.  I've had my eye on them for some while - the long-defunct Bellona range of vac-formed terrain is a very fond memory of my childhood - but until now I'd not bought any of Amera's product.

Of the 2 pieces I purchased at Salute, I've now finished one.  I have special plans for the other (F218 Temple Ruins); it won't be finished as a temple if my ideas work out - but that's for the future.  For now, here is a description of the model that I have completed. 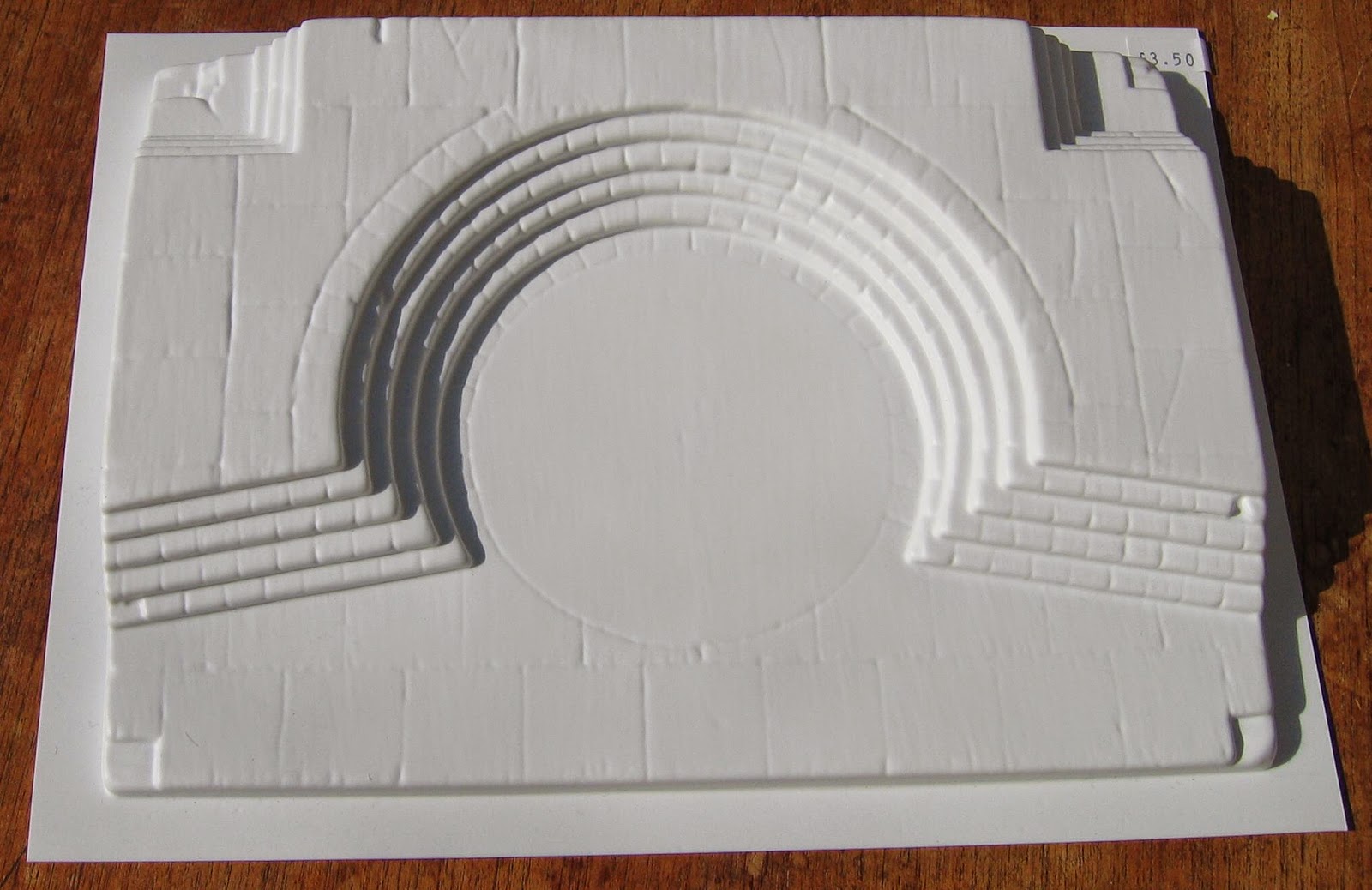 This piece appears in the Amera catalogue as "F208 Amphitheatre".  Officially it is in the 28mm Fantasy section, but I see no reason why it couldn't be used for historical settings or indeed for 15mm or smaller figures.  Other than the depth of the terraces and possibly the size of the stone slabs, there's not much to indicate scale on this.  Indeed, the "orchestra" (the circular space in the middle for the performers) averages 78' (23m) in real-world Ancient Greek theatres.  For 28mm figures, this equates to rather over 1' (30cm), which would be a prodigiously large terrain piece.

So, my amphitheatre is going to be a small, provincial affair rather than one associated with a busy city.  However, it has a wealthy patron, so the orchestra will be paved with marble rather than just packed dirt.  This is really just an excuse for me to try out a circle-cutter that I got for Christmas (from a pound shop or similar "bargain" store, so not a very expensive tool at all!).

I cut out a disk from plasticard that was embossed with paving.  This is really sold for scratch-building model railway layouts and is scaled for OO layouts, so the paving is perhaps a bit small for my project.  Still, it'll just have to do.

I also cut out a slightly larger ring from plain plasticard, to be used as a border.  I used a triangular file to mark out the stones on it by cutting a slight groove every 1cm or thereabouts. 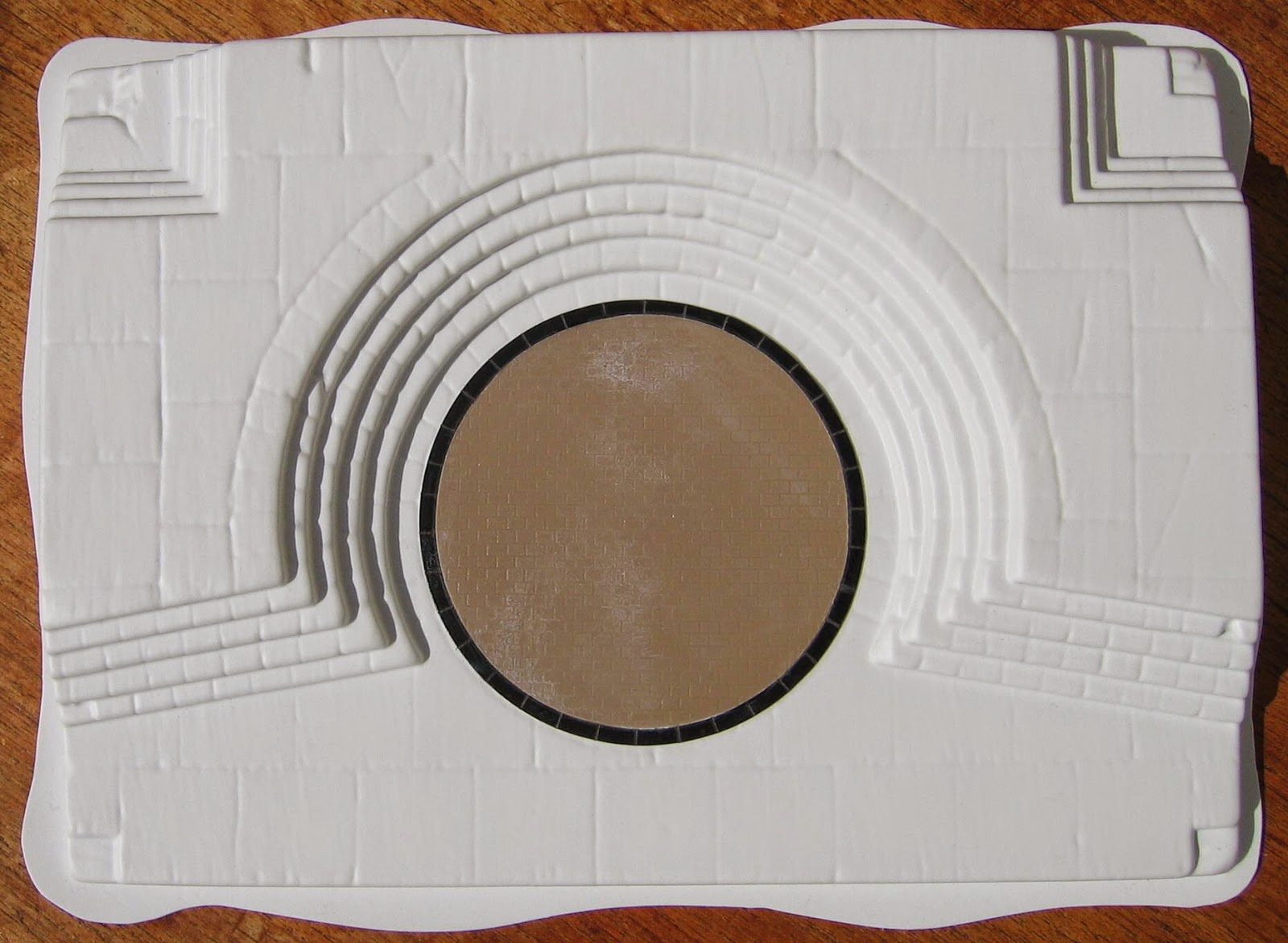 Fitting these new parts to the model was easy - or at least it would have been if I'd applied the super glue to the correct side of the plastic!  If the finish looks a bit rough then that's because I had to wipe off the embossed side very quickly, wait for the remnants to dry and then try again.

I also took the opportunity to shape the rim around the bottom, thus removing any straight lines.  It's my opinion (not backed up by any science of which I'm aware!) that straight lines draw the eye more than gently-curved ones.  My intention is for the base to blend in with the table a bit better.  I really don't know if this works or not, but there we are.  Hmm.

Actually, I did consider removing the base rim completely, but I decided that it probably added some structural strength.  I also thought of packing the reverse side to enable the model to take heavy figures.  However, it's made from quite thick plastic as it is and barely flexes when I press down in the centre of the orchestra.  In the end, I decided that such reinforcement wasn't needed. 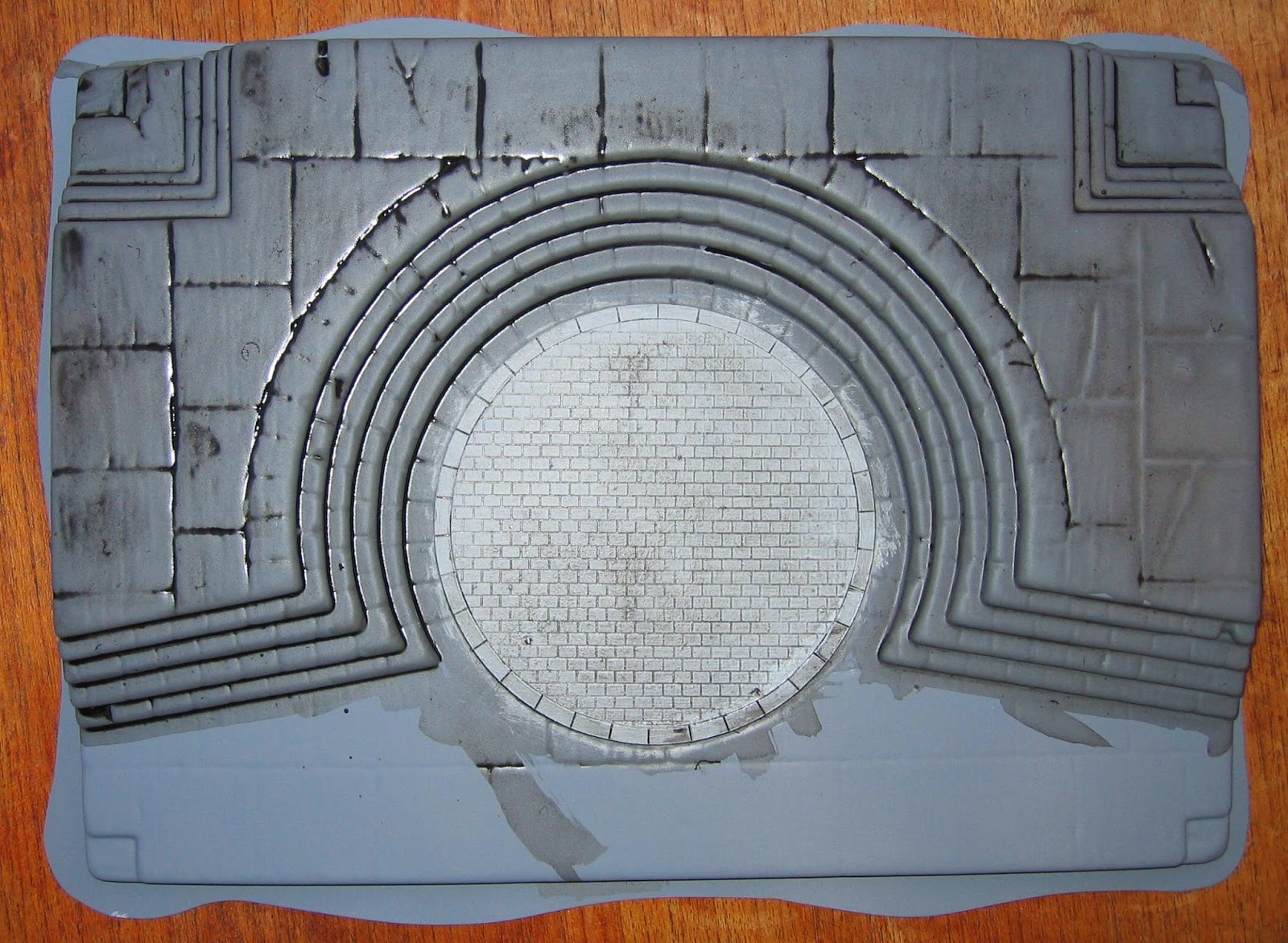 The amphitheatre was coated with my usual grey undercoat (Halfords spray body primer, for cars).  The circle of marble was painted in a much paler colour and then all the stonework was washed with black. 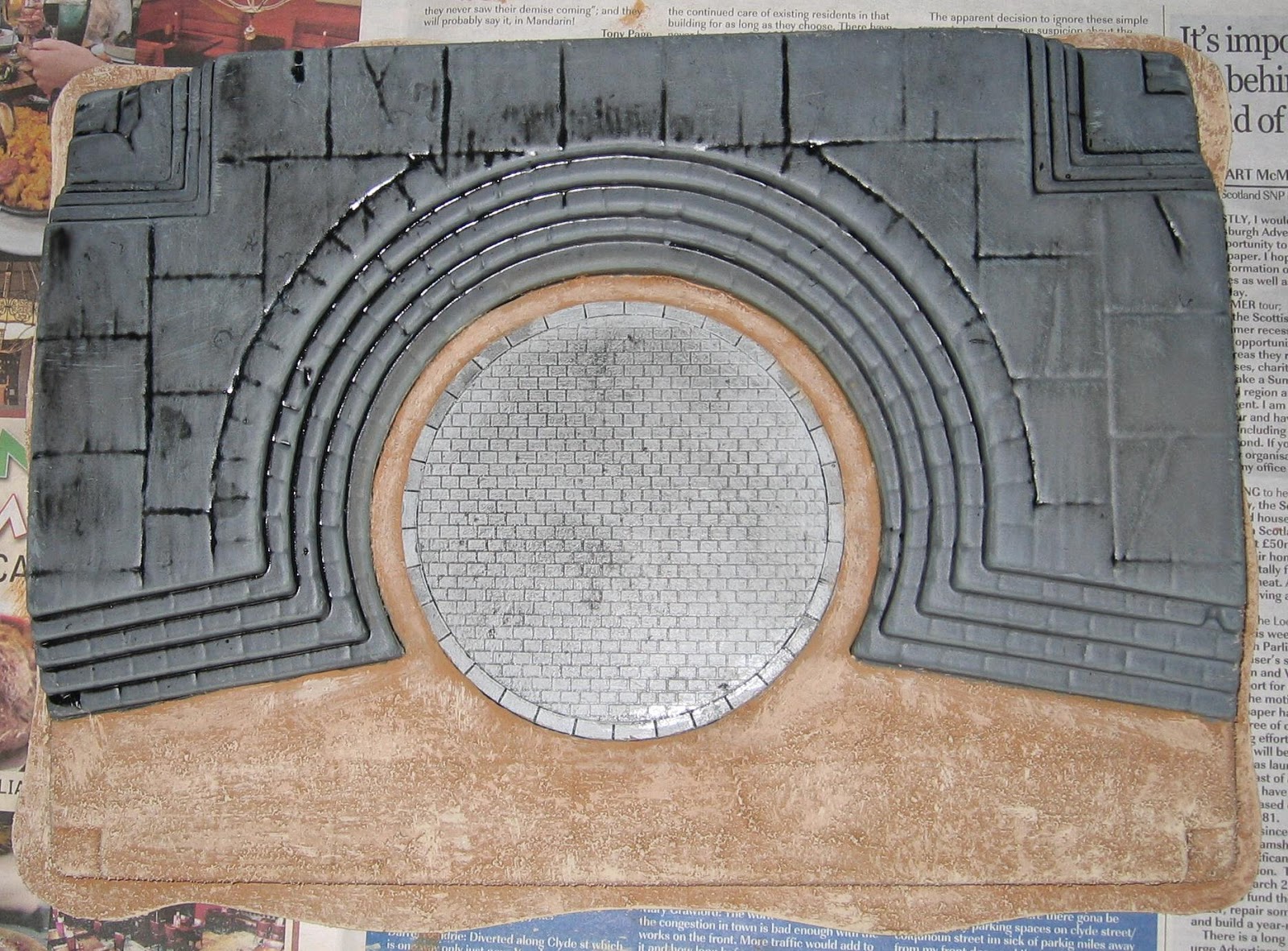 For the dirt parts, I under coated with a mid yellow-brown paint to which some sand had been added (for texture).  A couple of successively lighter dry-brushes completed this. 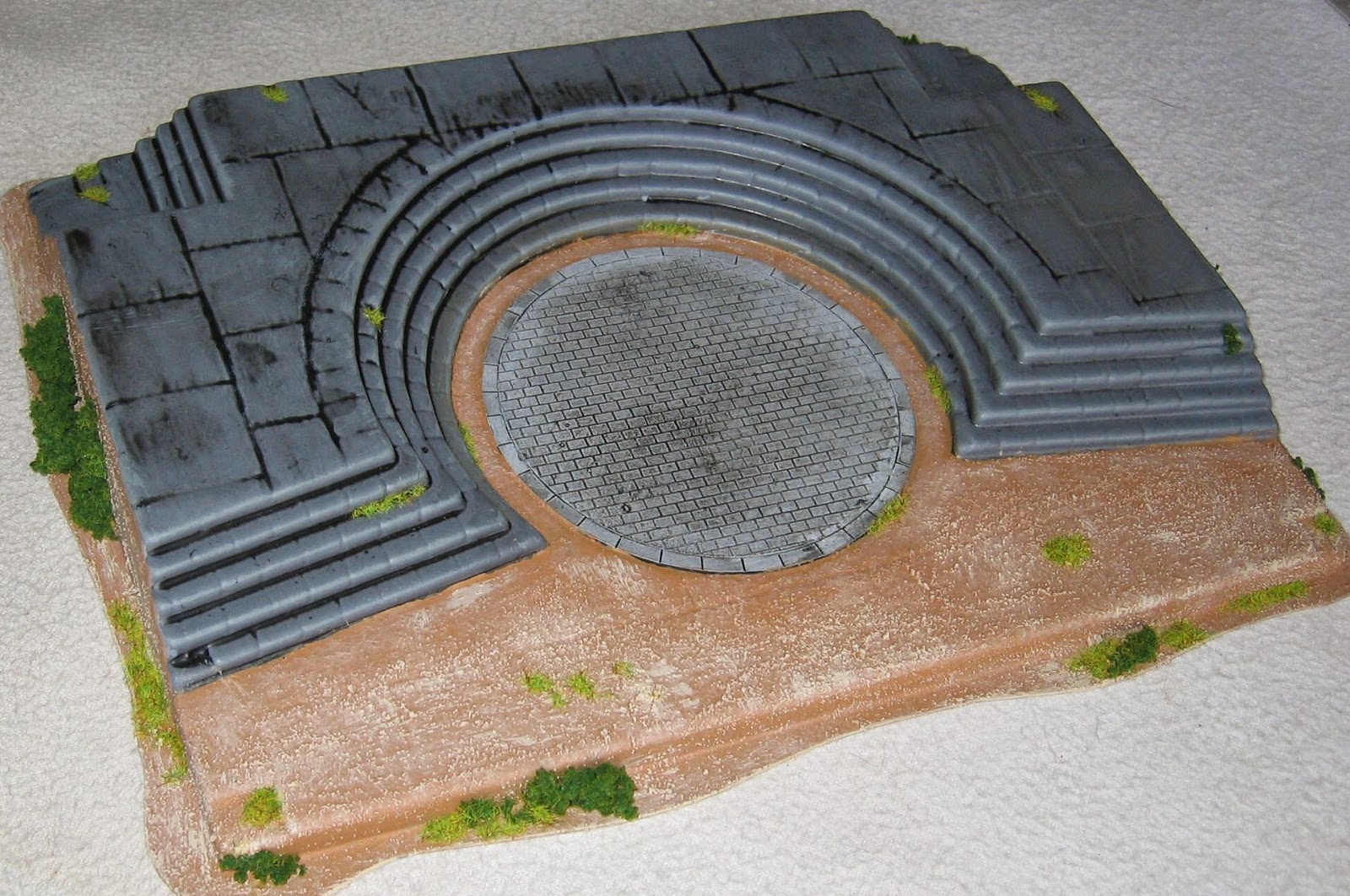 Finally, the edges of the stonework were highlighted and I added some static grass and clump foliage.  This theatre might have had a rich patron once upon a time, but I think it's fallen on hard times more recently and the weeds are starting to take hold! 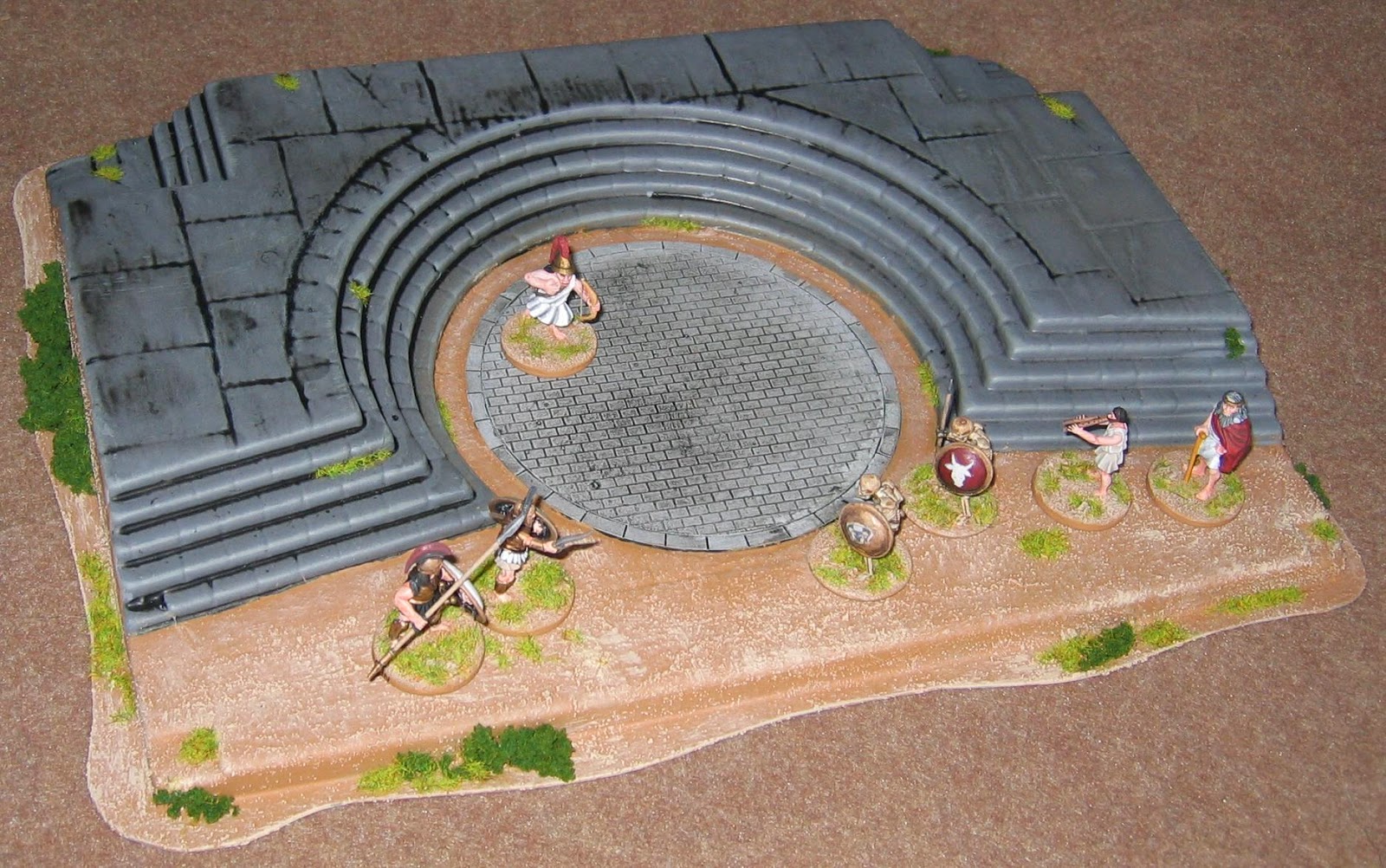 It occurs to me that I haven't mentioned the size of this model amphitheatre yet.  Well, it works out at roughly 30cm wide and 21cm deep, or perhaps slightly larger than this.  Even if it's really too small for a historical Greek theatre in 28mm, it's still quite a big model!  The figures seen on it are some of my "Jason and the Argonauts" project; I don't think that the skeleton warriors summoned by the evil King Aeëtes are part of the show at all!

The cost of the amphitheatre is a mere £3.50 (plus a little for the materials I've used on the model).  I'm very happy with the way it has turned out and I can certainly see myself buying more products from Amera in the future.  Now I've just got to work out how to store this piece...