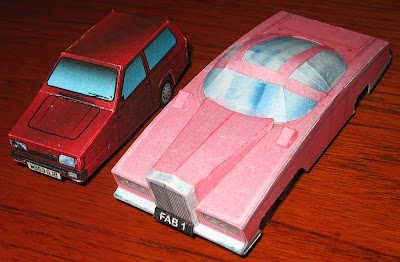 Last week, I published pictures of some card models that I built whilst on holiday: here.  These were all downloads from Dave's "Cut and Fold" Card Creations site and a wonderful resource it is!  I also mentioned in passing that I had started (but not finished) a 6-wheeled, pink Rolls Royce.  Well, I've now completed FAB1 and here it is!  There's also a nice, simple bonus model that only took me a short while to make.

As all fans will know, FAB1 is the name of Lady Penelope's vehicle from the Thunderbirds TV series by Gerry Anderson.  She was described as International Rescue's "London Agent" and was a cross between a super-spy, a diplomat and a high society debutante.
In keeping with her extremely glamourous position, Lady Penelope was driven about in this flamboyant and brightly-coloured Rolls Royce by her dour butler/chauffeur, Parker.  Parker was a reformed criminal whose underworld contacts and burglary skills often came in useful, but his driving of FAB1 was near-legendary as well.
The limousine was not just a luxury transport, though.  FAB1 had more gadgets than one of James Bond's rides, including multiple weapons, defensive and anti-pursuit measures.  Heck, it could even drive on water at up to 50 mph!  Mind you, I don't like to think too much about the fuel consumption it must have required... 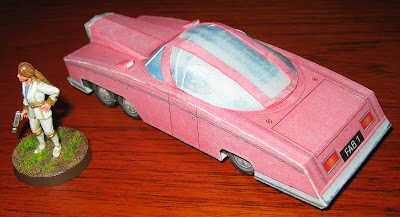 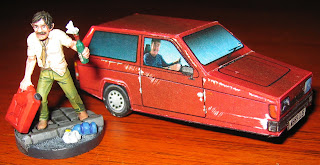 At the other end of the price & luxury scale, we have another car from Dave's Cut and Fold site.  This is the much-rubbished Reliant Robin and unlike FAB1, it was a real vehicle which sold in considerable numbers!
It was often criticised for not being much of a car (to put it mildly!), but that's really missing the point.  The Robin was designed to fit with the lesser requirements of British license and tax regulations that more usually applied to motorcycles.  I'm simplifying a bit here, but the result was that it was much cheaper and simpler to run than a 4-wheel vehicle.
This particular Reliant Robin was made famous after it appeared in an episode of the BBC's Top Gear motoring programme.  In that, I believe M969OJB was driven by (and lambasted by) Jeremy Clarkson.  This kit has a small image of Mr Clarkson in the driver's window.

What can I say?  These are both fine models in their own ways.  FAB1 is the epitome of 1960s glamour, chic and hope for the future, whilst the Reliant Robin was a very easy build.  I hope to use both of these in my games, in due course.  Probably not in the same game, mind.
Posted by Colgar6 at 10:26