My *other* Imperial Fleet

I've been trying to tidy up my work area recently; it's such a mess that I've not been able to do any painting for 6 weeks or more now.  Rather than just push everything loose into yet more piles, I'm attempting a "deep clean", where I reorganise quite a lot of the storage of my finished models as well as deciding how to arrange all the tools, paints, part-finished figures and materials.  Of course, this is going very slowly...

Whilst I was opening some of the tattier cardboard boxes on my shelves to discover what was in them, I came across the following spaceships.  I thought that maybe you'd like to see them too, before they go back into a more suitable box.  They are my Imperial starships, though I'm not really sure to which Empire they belong.

I have a different Full Thrust "Imperial" fleet, based loosely on the bad guys from Star Wars, but I actually had this fleet painted up first and so technically it's my first set of  such ships.  Ah, I guess that I just like huge, star-spanning civilisations with grand, hereditary heads of state!

All of these starships are from Games Workshop's Battlefleet Gothic range.  They come from the Imperial and Space Marine ranges, though I don't necessarily regard my versions as belonging to the Warhammer 40K Universe. 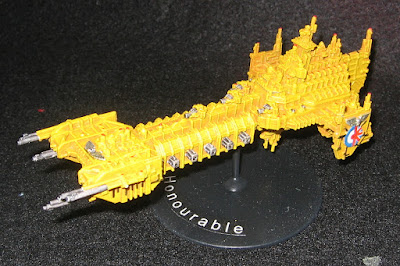 The "Honourable" is a huge ship.  Officially, it's a Space Marine "Battle Barge" (whatever one of those might be!), but I regard it as simply a very large battleship.  She's clearly armed with multiple heavy beams on the prow and with missile launchers or possibly guns on each broadside, plus a significant, turreted array of lighter point defence weapons.

To put a bit of distance between my models and the Warhammer 40K universe, I've painted a Warzone Imperial insignia on the tail fins.  That should confuse both sets of fanboys, I think! 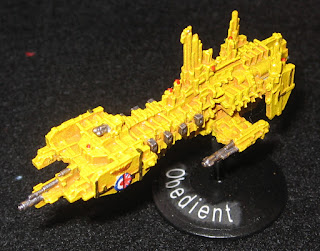 Obedient clearly shares some of the same design principles as the Honourable, but is a lot smaller.  It's not immediately obvious just what a size difference there is until you see the two models side-by-side.

This light cruiser also has a Warzone Imperial insignia on her sides, forward-facing beam weapons and broadsides of missile or gun tubes.

Next up are the 6 destroyers of the 52nd flotilla.  They're all Firestorm-class vessels, though there are minor variations between each.  This is partly due to being built at different yards and partly due to varying levels of refit and upgrade.

The Firestorm-class destroyers have a heavy battery of forward-facing beam weapons.  These aren't powerful enough to take on an enemy battleship, but rather their task is to screen their own capital ships from hostile light units.

Finally, here are the 5 frigates of the 114th squadron.  They're all Viper-class torpedo boats, whose task is to assault enemy heavy units.  Since the Vipers are lightly built and don't have much in the way of weaponry other than their torpedoes, they have short life expectancies!  Still, every frigate's captain dreams of glory: if he, she or it could just be the one to sink an enemy flagship then they'd be a hero!

This is quite an unbalanced fleet, with plenty of small and large ships but not much in between.  I could use a few more cruisers and I might even have 1 unbuilt Space Marine cruiser lying about somewhere.

Will I ever use these models in a game?  I hope so, though at the moment I don't have any Full Thrust SSDs for them.  I suppose they could also be used in Battlefleet Gothic, or 5150: Star Navy, though, if only I had the time...
Posted by Colgar6 at 20:41