I've been working away on many projects recently, without really concentrating on any one.  Sometimes I'm finishing off a model that has languished for too long on my paint table, sometimes I'm producing more figures to extend an existing project and some of my output is for new settings that I haven't yet gamed.  Judge for yourself; here's an eclectic collection of models; the only thing they have in common is that they have been completed recently!

First up is a card model: this is the Hotwheels "Deora" from Dave's Card Creations.  Whilst the kit is based on a toy, it does represent a futuristic design from the 1960s.  As such, I thought it would be ideal for my long-awaited Captain Scarlet game, though it could also be used in Star Trek or any other 1960s Sci-Fi or Spy-Fi setting.

Note that I've scaled this model up a bit from the downloaded pattern.  I can't remember how much, though I think my version is between 10% and 30% larger than the "out of the box" model.  Also, I've added treads to the wheels to strengthen them, though this isn't visible in the picture above. 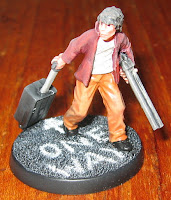 My second offering is "Denver", from Reaper Miniatures.  He's described as a zombie survivor and is clearly based on the character of Columbus from the film "Zombieland".  I've tried to paint this model as he appeared in the movie, though I don't recall him having any luggage there.

Note that Reaper are known for their considerable variations in the size of their (human) miniatures.  "Denver" is bigger than average; I had to place the model on a 30mm base rather than my more normal 25mm.

Moving on, this is a model of "the Master" from Doctor Who.  The Master has had almost as many different portrayals as the Doctor himself; this version comes from the rather poor 1996 Doctor Who movie where he was played by Eric Roberts.

The model is from Black Tree Design (for some reason, their current website is now "eorbis.co.uk"; this is not a misprint).  As well as a renegade Time Lord, I could see the figure being used as a futuristic VIP, a cult leader or a modern wizard.  Use your imagination to come up with other ideas! 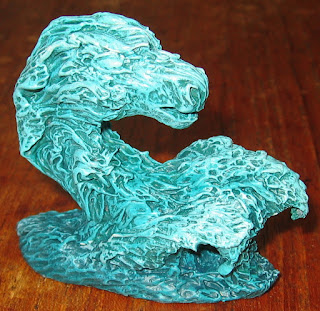 Next, here is a water elemental, also from Black Tree.  He/she is a single-piece casting and is a very large lump of metal!  For all that, it's a simple piece to paint; I used a base colour and a lot of dry-brushing.  I wonder if I should have picked out the eyes in something different, though?

The water horse is intended for games of 7th Voyage, where it could be part of either heroic or evil casts, or indeed just a hazard of the scenery.  Jason and the Argonauts, beware! 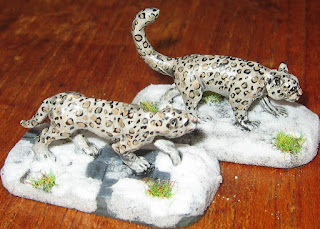 To finish, I've just completed a pair of snow leopards for Frostgrave.  The one in front is from Black Cat Bases (although it is described as a "panther" there), whilst the other is from North Star's official Frostgrave range. 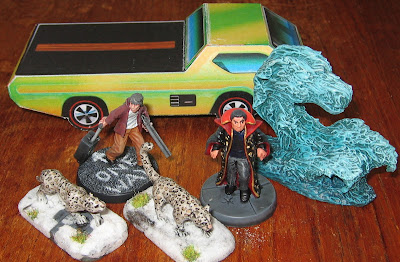 It can be difficult to judge the size of a model from a single picture, so I've included a group shot as well.  From this last picture, you can see just how big is the water elemental.  Note also that "Denver" looks similar in height to the Master, but remember that the former is bending forward whilst the latter is standing up straight.  In reality, Denver is quite a bit taller than "regular" 28mm figures, though not impossibly so.
Posted by Colgar6 at 12:04