The Tesserae Incident: Part 2 (the Game)

Last week, I described my reworking of a scenario for Full Thrust: The Tesserae Incident.  It's basically a Klingon commando raid on a secretive Romulan research base.  Initially, the attackers have overwhelming force, but the defender's reinforcements arrive steadily; how much time can the attackers afford to retrieve the secrets from the installation?

As I see it, the Klingons have a number of key decisions that they need to take early on:
For the Romulans, these issues arise:
Here's how it went when we played the game: 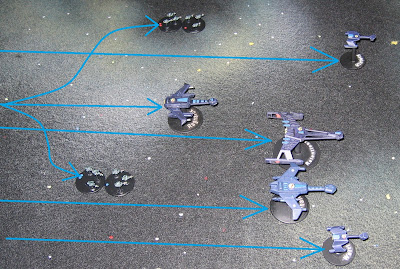 In our game, the Klingons decided to come in at high speed (typically 16" or so).  Shuttles were launched and the warships surged forwards. 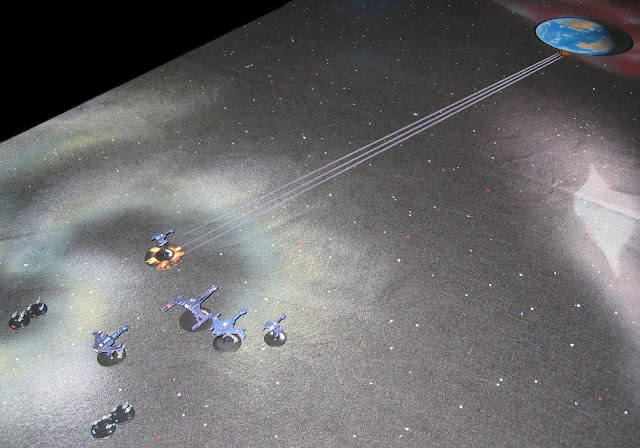 There wasn't a lot for the Romulans to do on turn 1, but I realised with delight that one of the enemy frigates was just in extreme range for the base's heavy beam battery.  A runaway series of '6's ended up causing 9 points of damage to the tiny ship which was completely vapourised [in Full Thrust, a beam weapon that rolls a '6' not only inflicts damage, but also gets to roll again].  So, a bad omen for the Klingons, or just an extremely lucky shot?

The Klingons continued to approach at high speed.  Anticipating a bombardment, the base switched on its Reflex Field (thus prohibiting it from shooting).  However, the attackers also held their fire...

An ever-increasing number of "blips" was beginning to worry the Klingons,  Romulan reinforcements were arriving, but there wasn't much the attackers could do about this except carry on with their plan.

The main event of turn 3 was the ground assault on the Romulan base as the troop-carrying shuttles arrived at their destination.  Here's how it went: 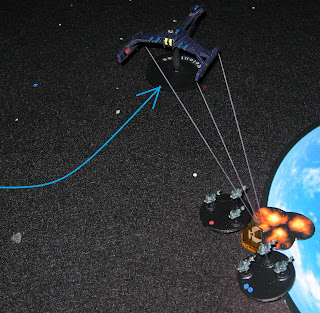 Still there were no Romulan ships on the board, though there were blips all over the place.  The assault on the planet was taking too long (and the outcome was too evenly balanced).

In an act of desperation, the Klingon battlecruiser "Relentless" fired everything it could as it flashed past the planet at high speed.  The base lost one living quarters (and the associated scientists), but more importantly the volley knocked out all of the facility's fire control systems and killed one base security squad.  At least that was very much in the Klingon's favour! 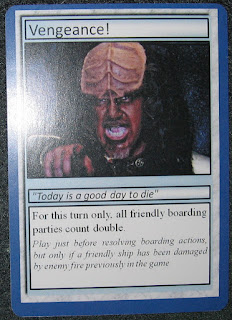 Things looked better for the commandos now that they had a 2:1 advantage in surviving troops.  However, the Romulan commander (i.e. me) then played a Vengeance! event card.  Sadly, even though the last base security squad fought with redoubled strength, they didn't manage to do more than trade losses with the Klingons.  Result = 6 shuttles, 1 commando squad left.  No base security remaining, so the last Klingon assault team captures the base (just)! 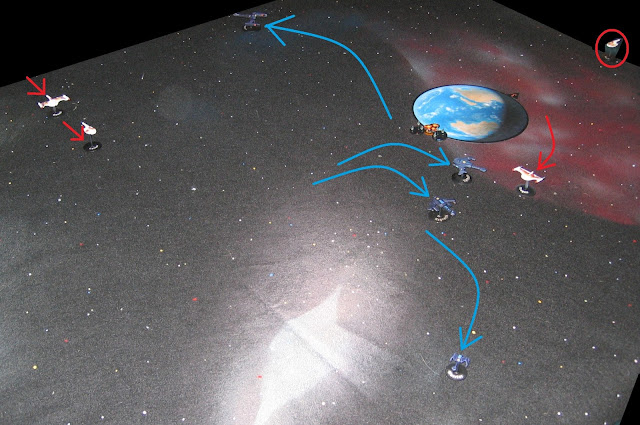 As the Klingon ships executed high speed turns away from the planet, the Romulan fleet decloaked!  The defending ships were travelling relatively slowly, hoping to sandwich the invaders in the middle of the table.  Whilst that wasn't quite how it turned out, they were still fairly well positioned. 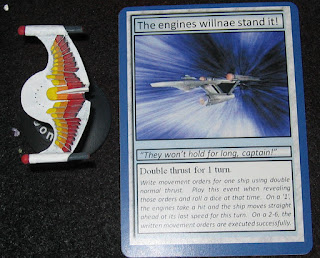 Realising that the Romulan cruiser "Dragon" was perfectly positioned to attack his assault carrier, the desperate Klingon played an event card on her.  Normally, this card ("The engines willnae stand it!" would be used on a friendly ship, but the Klingon was hoping that the Dragon would break down.  It was an interesting gambit, but it wasn't to be; the Dragon's chief engineer was too canny to over-stress his engines in this manner. 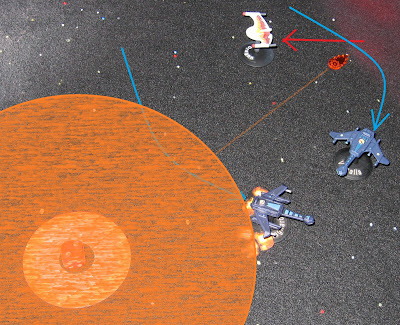 The Klingon ships took evasive action, but it wasn't enough.  The Dragon's plasma torpedo just clipped the Ragnarok (the assault transport) and rocked the vessel.  Damage was severe, including a warp core critical hit.  Before damage control teams could react properly, the Ragnarok blew up in a spectacular display of pyrotechnics!

The Klingons were in real trouble now.  Their battlecruiser (Relentless) had flown off the table; it's high speed and relative lack of maneuverability meant that it couldn't turn tightly enough to stay in the battle.  Even though the 6 assault shuttles left the planetary base full of captured equipment, technicians and documents, the loss of the troopship meant that they would find it extraordinarily difficult to escape.


Events were played on the Romulans whenever possible, at least until the Klingon player ran out of cards, but they only slowed down the inevitable end. 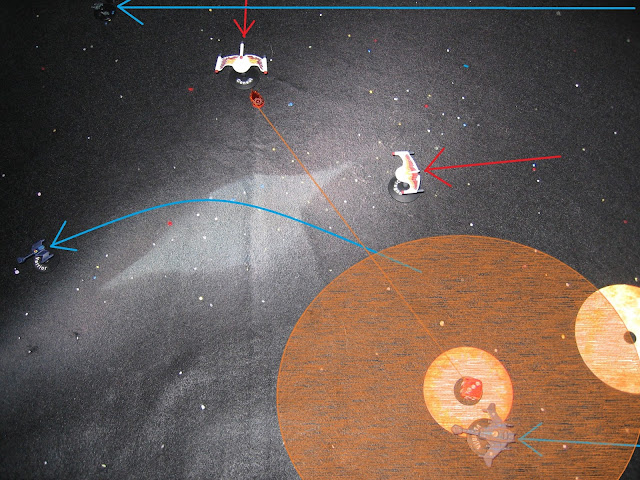 Finally, the Romulan battlecruiser Consul torpedoed the last remaining Klingon cruiser.  Although the Valhalla survived that attack, she was very heavily damaged and didn't have any realistic chance of either escaping or of fighting back.  We played another turn after this, but it was obvious that the Klingons could do nothing to change their fortunes.

Could the Klingons have won this scenario?  The game went quite heavily against them, yet they did suffer some bad luck:

So, could you do better as the Klingon?  Would you have changed the force composition (perhaps having 2 smaller assault transports might have worked better)?  What changes to tactics might have improved their odds?  I'd be most interested to hear your thoughts - and I'd be absolutely delighted if anyone else also played this scenario and reported their results!
Posted by Colgar6 at 19:08