I don't often write "work in progress" articles, but it's time for one now.  What's the occasion?  Well, I'm stuck and cannot decide how to proceed; your opinions would be most welcome!

OK, here's the story.  A few weeks ago, I bought a few pieces of laser-cut MDF terrain from Blotz.  I've almost completed the greenhouse, which is a lovely model, but that is stalled until I can find or make some model flower pots.  I'll hold off telling you more about it until another time.  So, the topic for today is the Shield Generator. 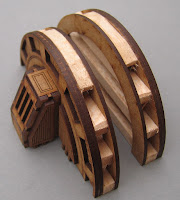 I bought the (single, but double-sided) shield generator, thinking that I would add it to my Star Trek starter colony (when I finally get round to building this!)  Blotz make several variants on this pattern; the one I bought is the most basic of their generator kits.

Once I had constructed the two end pieces, I decided that rather than glue them back to back as instructed, it would make a more impressive piece if I could lengthen the generator somewhat.  I added some spacers from balsa and I do intend to add a skin over the top to cover these spacers, but perhaps this isn't enough?  Couldn't I make something bigger from this? 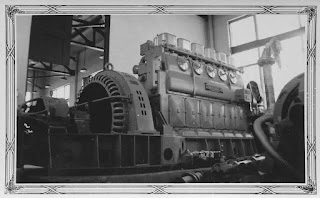 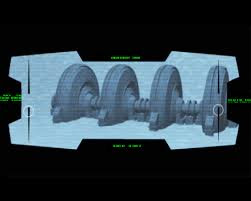 Above are a couple of pictures of generators or engines that I've found on the Internet.  One is (I imagine) from the 1920s or 1930s, whilst the other is very much science fiction.  I'm not trying to copy either of them exactly, but rather to come up with a terrain piece that could be used for pretty much any industrial or post-industrial genre.  So, what sort of alterations could I make to the basic Blotz kit? 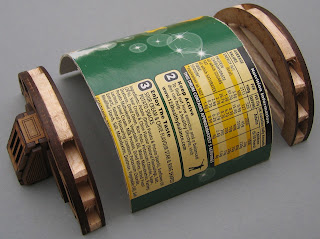 It would be very easy to add a half-cylinder between the two end pieces.  Such an extension wouldn't necessarily be the piece of tubing that I've pictured here; I could make it shorter, or longer, or use a smaller diameter.  The point is, would a cylinder look OK?  That's option A. 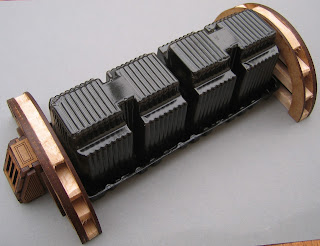 My second possibility is that I finish the generator by filling the gap with a piece of interesting-looking packaging.  I think this particular piece of black plastic came from a packet of after-dinner mints (supermarket own label, not the more famous brand), but I cannot remember for certain.  The plastic is fairly thin and flimsy, so if I used it then I'd probably need to find some way of bracing or filling it before it could withstand much handling.  But would it look the part?  Option B... 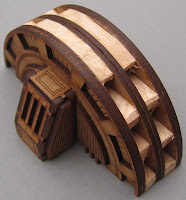 My 3rd choice would be to build the model more or less as the manufacturer intended, by gluing the two end pieces together, back to back.  Obviously I've already extended the length a bit with my balsa inserts, but the gaps will be covered with a new skin to hide them.

It may seem like a trivial issue, but I find many of my model-making projects stall on just such a decision point.  I find that I really need some particular piece to complete a mini-diorama, or I can't quite figure out which technique or colour to use for the next stage, or some other equally mundane issue arises.  Until I can answer the question, the model is moved from "active" to the metaphorical "to do" list, where it will often languish for weeks, months or even years.

Help me out here, please!  How should I finish the generator?
Posted by Colgar6 at 19:18