I can hear you all thinking "Wait a minute - it's still Saturday.  Zomtober posts are traditionally made on each Sunday in the month".  True, but there's nothing in the rules (such as they are) to say that it can't be done earlier than Sunday, as long as it's each week.  Anyway, I've got a Halloween battle report to come on the 31st, so I wanted a bit of a gap between that and this post.

This will be the last of my zombie/survivor duels for 2016, so make the most of it.  After all, it's not every October that has 5 Zomtober Sundays (err, Saturdays) in it! 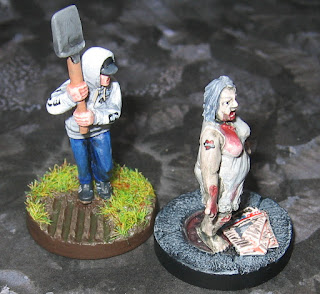 Today's confrontation is between Matt and Big Momma Zombie (BMZ).  As you can see in the picture above, he is creeping up behind her, with a spade raised and ready to strike!

I usually pose my "duels" with both models facing each other.  However, when I took this pair to be varnished, I just happened to place them down on the spray turntable with her facing away from him.  I decided that I liked the way this looked; it gives quite a different angle to the story! 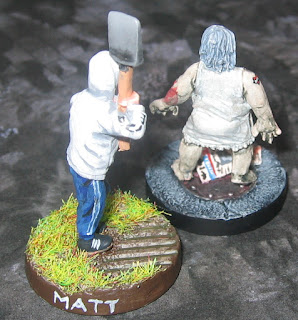 BMZ is from Studio Miniatures' Zombie Mob 002.  There's not really a lot of detail to paint on this model, just flesh and nightgown/slip.  I attempted to make her clothing slightly translucent, just to try out a new technique.  However, I don't think it quite worked out; the nightgown looks like a dirty white instead.  Which is OK for a zombie, but not really what I had intended.

To add a little colour to an otherwise very drab model, I painted a little tattoo on BMZ's right shoulder.  It's possibly a little too bright & solid, though?  I also added quite a bit of detail to the newspaper at her feet.  I wonder if anyone can guess which (UK) publication I used as a pattern? 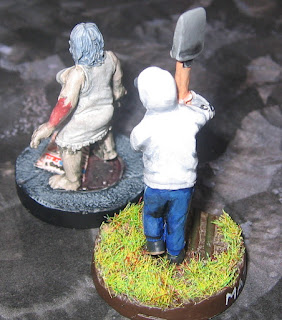 Matt is one of Offensive Miniatures' street kid/young rioter models.  He's been fixed to a Basius II base, but is otherwise unconverted.  I've tried to decorate his clothing with the various stripes, slogans and logos that such a young thug might well wear in real life; this probably makes him a bit more interesting than if he was dressed in a plain-coloured top and plain trousers. 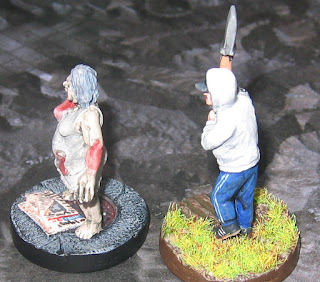 OK, here's the important bit: who wins?  Matt clearly intends an attack; presumably BMZ is blocking his path or his access to some resource.  Although maybe Matt just feels like shovel practice - you never can tell with barely-educated street kids?  He looks determined enough, but is he strong enough to inflict fatal damage in one blow (and skillful enough?  I think I might use the edge of the blade to hit the zombie, rather than the flat part)? 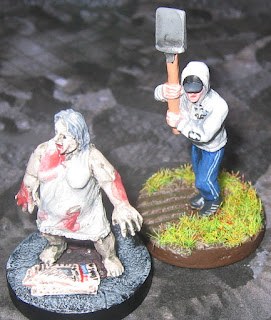 If Matt doesn't fell BMZ with a single strike then he might be in trouble.  If she turns and grabs for him then he'll have difficulty breaking free - just look at the size of her hands!  And I don't think she'll have any qualms about eating him either; I'm pretty sure that not all the blood on the gown is her own!
Posted by Colgar6 at 15:40