I've been very quiet on the blogging front recently, but that doesn't mean I've stopped all hobby activity.  Far from it: I've been painting away busily, trying to finish - or at least put a serious dent in - 2 major projects.  One is to finish off all my Super Dungeon Explore figures (a difficult task, seeing as how I've got several unopened warband boxes yet to go) and the other is to paint my small (but growing) collection of Relic Knights miniatures. 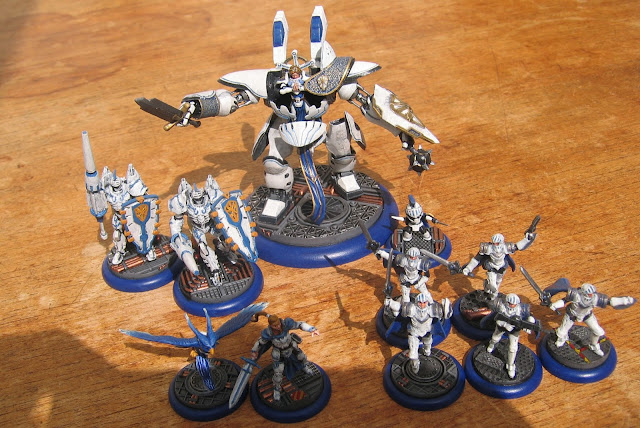 I first came across Relic Knights at Carronade 2017, where my son and I played a small demo game.  For us this was very much the highlight of the show: he loved the Anime setting and I was intrigued by the card-based playing style.

I decided to buy some figures after Carronade; this decision was confirmed after another excellent demo game at Claymore 2017, though with a slightly newer revision of the rules.  Here is my first completed faction!

Over the past few months, I've collected at least some models for 4 different Relic Knights factions.  These have all been sourced from eBay as second-hand bundles, as the new prices for this stuff is too much for my liking.  As a consequence, the collection I've been able to amass is an eclectic mixture of squads and heroes, rather than having any pre-planned composition.

Also, note that some of these models were built (but not painted, much) by a previous owner.  This wasn't always done to quite the standard that I would have achieved myself, so if a few of the figures look slightly odd in pose then it's not entirely my fault!

So, the Shattered Sword is an organisation of Space Paladins, perhaps somewhat akin to Jedi Knights in Star Wars.  They're pure of heart, well armoured and although they do use missile weapons and have psychic powers, their strength is in melee. 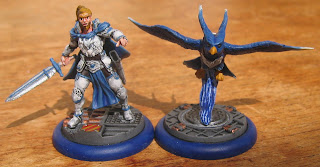 There are 2 types of knight in Relic Knights: Questing Knights and Relic Knights.  Both types are heroes and are available to every faction.  Each knight has a "familiar" known as a cypher, manifested of mystical energy and (at least somewhat) matching that knight's personality.

The difference between the types is that a Relic Knight is more experienced and has found a relic to aid them; this seems to be almost invariably a large, stompy robot/walker.  On the other hand, a Questing Knight is more junior and is still searching for such a powerful artifact. 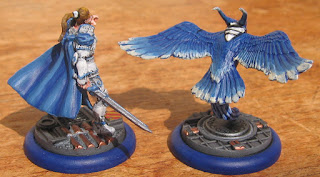 Francis Malory is a Questing Knight; his cypher is Quill, a giant, blue bird something like a hawk. 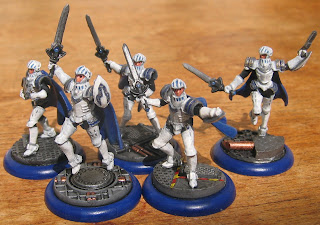 Of course, each faction has foot soldiers, grunts, thugs or other minions as well.  In the case of the Shattered Sword, the basic troopers are the Swordsworn.  They're your fairly average space knights, dressed in white armour & blue cloaks and wielding power swords and blasters. 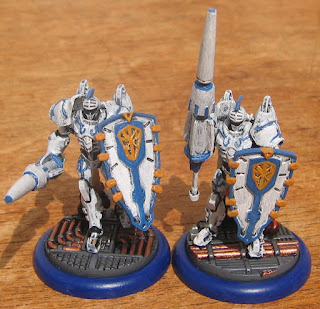 The Paragons are heavy support troopers.  They are in much larger suits of armour/mini-mechs and are armed with star lances (yes they can shoot, quite effectively at that!) 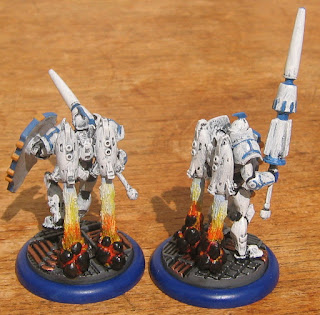 In addition, the Paragons have rocket packs, so they can fly - or at least make short hops.  Note that the "exhaust" effect is something I scratch-built; it's not part of the models as supplied.  It helps to remind me of their flight capability, though (and it was fun to build!).

I'm not very happy with the way I painted these models.  They were the first Shattered Sword unit I built and I was still experimenting with how to paint a mostly-white figure. 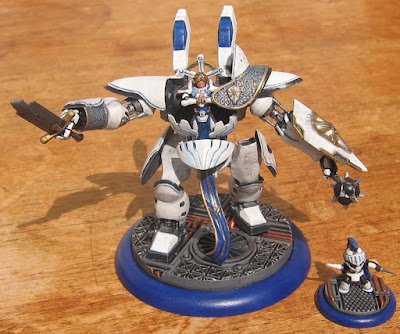 Finally, Sebastian Cross is a Relic Knight - he has found his ancient artifact, a large warrior mech.  His cypher is Rook, a miniature knight with a surprisingly dark look.

Sebastian himself seems to be extremely devout.  It's not obvious whether he's just praying/meditating before an action, or if he controls his mech/relic with thought power alone. 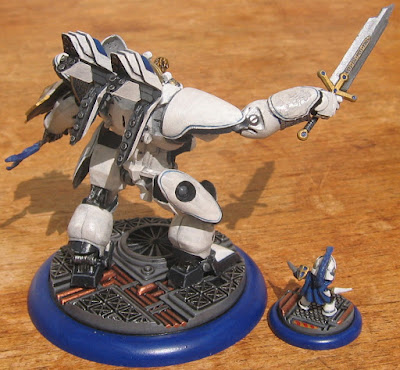 This relic is a huge model!  My white paint isn't particularly good quality and it needed at least 3 or 4 coats to achieve a decent finish.  Consequently the mech took several weeks to finish - probably longer than all the other models in this faction put together.

I'm assuming that the "vents" at the back are heat sinks, rather than being any form of jet propulsion. 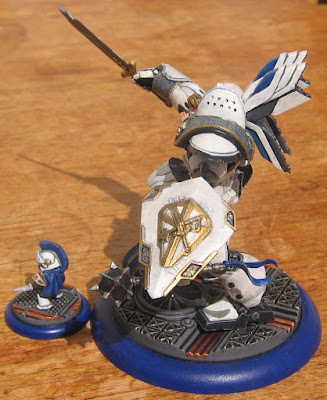 I've enjoyed painting these models, though obviously they're not enough on their own to play a game.  Most of my Black Diamond (mercenary army) force is now complete and I've also got some Star Corsairs (space pirates) and Cerci Speed Circuit (boy/girl racers) to build.

I'm still not sure if this is just a passing fad for me, or whether it's the start of something more significant.  Probably the former, but you never know...