Zomtober - is that still going?  I feel as if I've been posting these articles like, forever!  Ah, well - there's no rest: here's another Sunday and so I owe my readers another zombie/survivor duel... 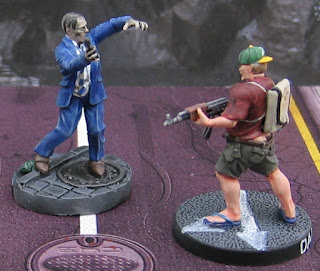 Today's pairing is between a very newly-completed survivor named Danny and a newish build of a zombified agent from the Men-in-Blue organisation.

I've hinted at my Men-In-Blue agents before in a couple of posts (one of which was a Zomtober duel some years ago between a MiB female agent and a zombie.  Sadly, I cannot remember which article and I can't be bothered to look, so if you want to know then you'll need to find it yourself :-) ).  However, I've never really explained what type of organisation MiB might be.  The truth is that I don't know myself, yet!  I've painted up 2 live agents so far, plus a zombified ex-agent - but without much of an idea as to what they do... 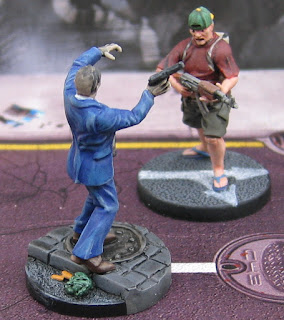 Men-in-Blue zombie (MiBZ) has got a gun in his right hand.  However, he doesn't appear to know how to use it.  Indeed, he seems to have only just noticed his left hand for the first time; it's clearly engaging a lot of his very limited attention. 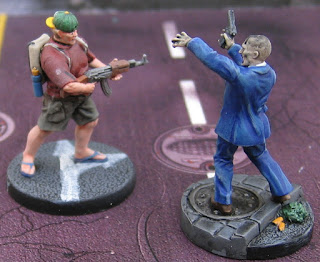 On the other hand, Danny is dressed for a day at the beach, or maybe for a visit to Disneyland or a sports match.  His sandals, tee shirt and shorts don't suggest to me that he is particularly likely to survive zombie fighting for long.

Then again, he's picked up an assault rifle from somewhere - and he has a water bottle as well.  I've mentioned before the importance of having good access to hydration during the apocalypse, so maybe Danny isn't as helpless as he looks?  Or maybe he just got lucky with the gun and the sports bottle? 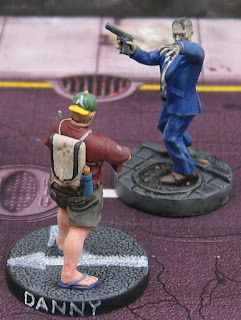 Both of these figures are out-of-the-box builds of Warlord Games plastic kits.  Danny is from the "Apocalypse Survivors: Men" set that was previously owned by Wargames Factory, whilst MiBZ is from the new-ish male zombies set.  The man is on the base which came with the kit, whilst MiBZ is mounted on a resin base from Escenorama. 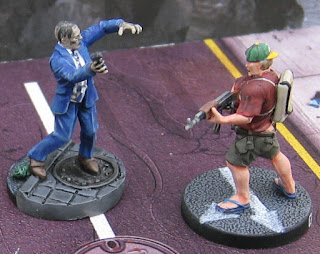 The final part of each of these duels is always the same question: what happens next?

My 2c worth: they're both pretty rubbish at their jobs: MiBZ is too busy staring at the five wiggly appendages on the end of his hand and Danny, despite lucking out in obtaining a gun, just isn't prepared for the fight of his life.

All other things being equal, I think I'd give the win to the man because he has the greater intelligence and dexterity.  Even if only slightly...