The Haunted Lighthouse from Tin-Soldier

For some time now I have been looking for a lighthouse model that I can use with my 28mm figures.  This would play a vital role in certain Pulp-style games as the lonely rendezvous for a spy and his/her handler, or as a focus for a raid by Nazis/aliens/sea monsters/...

I did consider converting a bedside lamp.  Yes, apparently you can buy table lamps in the form of a lighthouse!  However, they're (a) a bit too expensive for this type of project and (b) often quite kitsch - not very realistic representations of anything found in the real world.

It took a long time, but my hunt is now over.  I discovered that Tin Soldier publish a range of slightly unusual paper models to download and print; amongst these is a "Haunted Lighthouse". 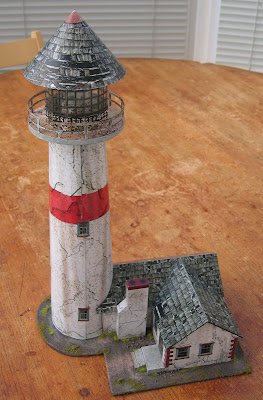 For a mere $10 (US), I bought the kit and downloaded the resulting PDF.  It's taken me about a week to build this kit, though note that this could be done a lot quicker if desired:


Other observations about the kit:

The first thing to say about my version is that I cut out an MDF base for the building.  This is slightly larger than the supplied (printed, coloured) ground and will be stronger & heavier than a foam core base.  It should make the whole assembly a bit more stable, especially considering the height of the tower.  I then painted and textured the base to fit in with my other terrain pieces, so the base you see in these pictures is quite different from that supplied with the kit. 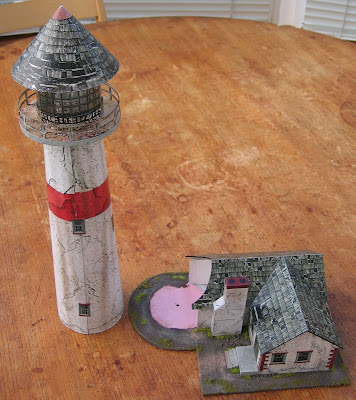 So, here's the next adaptation: I didn't glue the tower to the base.  Instead, there is a rare earth magnet at the bottom of the tower and an iron washer buried in the MDF base.  Together, these hold the tower in place very well, whilst still allowing it to be removed for storage. 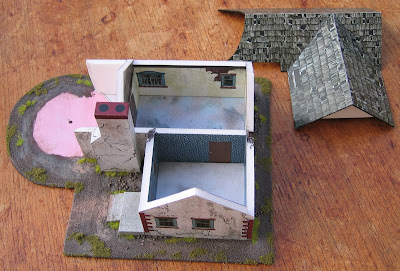 I made the roof as a separate piece too.  This allows access to the inside, though note that the kit does not supply textures for interior walls.  Instead, the inside is entirely my own work; it was easy enough for me to reuse parts from other kits or to download free wallpapers for dollhouses (look for 1/4" scale if you intend to do this as most dollhouses are intended for much larger figures). 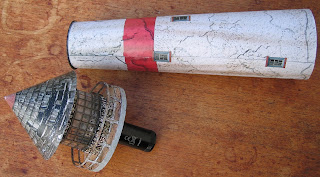 Here's another adaptation: the top platform is separate from the main tower.  This uses a simple plug & socket joint; the socket is 3" of solid cardboard tube from some packaging or other, glued firmly into the upper part of the tower.

Whilst on this part, note that the railing around the platform is especially fiddly to build from paper & card; it's easily the most difficult part of the entire project.  I did consider very seriously trying to scratch build a replacement from wire and/or balsa, but in the end I went with the printed parts. 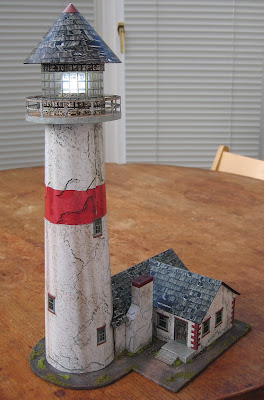 It's a lighthouse, so I couldn't resist making one final adaptation.  I embedded a cheap LED "pen" torch into the upper part (it's the "plug" part from the previous picture).  I added a clear plastic bead glued to the top to help redirect the light and then glued a plastic cap from a drinks bottle over that.  Yes, it does light up!  At night time it seemed very bright, though in this daytime photograph it's not so strong.

I'm delighted with this model!  It's certainly unique and should lead to some interesting games.  The kit didn't cost much in terms of money or materials, though it did take a certain amount of construction time, as all paper/card builds do.

Although it's described as a "haunted" lighthouse, there's nothing particularly spooky about it other than the derelict roofs and optional, grimy version of the lantern room.  Indeed, if the kit offered alternate, "clean" roofs then I think this could make an excellent working building instead.