Terrain for Congo: Termites and Grass

Here's a short post describing some terrain I'm making for games of Congo.  I've already got some large trees which can be used as stand ins for Baobabs or other large specimens (see here), but the new pieces below give me the option of some area features as well. 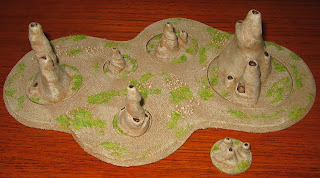 Let's see now; one of the iconic sights of the African veldt is a cluster of termite mounds.  These wouldn't be too hard to make from scratch, but I didn't have enough time or energy to do that.  Instead, I bought this set from Warlord Games. 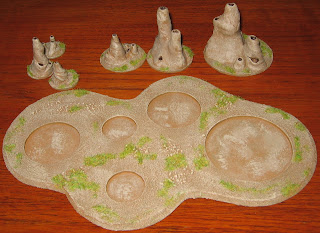 This set is fairly expensive for just six smallish pieces of resin, but it does come with some MDF base plates as well.  I don't know if this is normal, but my pack had 9 base plates in it!  All of these are different shapes, some larger and some smaller than the one shown in the picture above.  So, given that I had 8 spare base plates, some more terrain was required.

So, how am I going to fill another 8 area terrain base plates?  Well, I can and certainly will make some inserts from rocks, to represent rough ground.  However, I also wanted some elephant grass or something similar.  This vegetation is so called because even an elephant can hide in a clump of such grass; hardly surprising when you consider that some varieties can reach 18 feet high (i.e. about 5 1/2 metres)!  Good luck finding your golf or cricket ball if it vanishes into a patch of that!

There are a number of ways of modelling elephant grass in common use, but I thought I would try something different.  I'm not completely convinced by the end result, but see what you think... 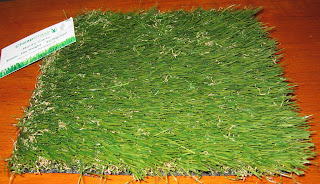 I started with some artificial turf.  There is at least one company in the UK that offers free samples, so I carefully picked the longer styles (typically 40-45mm pile) and ordered some of these.  In only a day or two, I received a parcel containing 6 squares like the one above, each somewhat over 6" square.  That's the best part of 2 square feet of artificial grass which didn't cost me a penny!  The only downside is that every website I visit now puts astroturf in all the advertisement boxes - but I guess I'll just have to live with that... 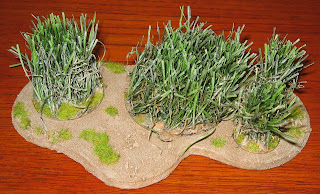 So, artificial turf isn't the easiest material to work.  Cutting disks was moderately difficult, as was gluing it to the circular insert bases.

Additionally, the plastic turf was far from upright.  It had a definite and pronounced lean in one direction which was not at all what I expected or wanted.

I squirted copious amounts of white glue into the base of each piece and found a way to force them upright whilst the glue dried.  That seems to have done the trick and the tufts have pretty much stayed upright since. 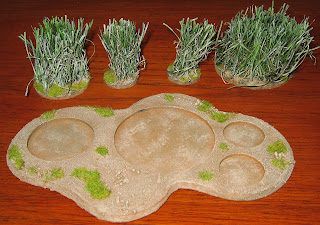 I finished the pieces off by spraying them with a pale tan colour from the underside, so as to make the "stalks" look pale but allow the "leaves" to remain green.  This could possibly have been done better by dry-brushing instead; maybe I'll try that on the next batch...

Savannah/veldt isn't open, empty grassland with as few obstacles as a cricket or football pitch.  As well as significant hills and forests, there may be many local areas of blocking terrain.  I've just started to scratch the surface, really - and I'm doing it fairly cheaply so far!
Posted by Colgar6 at 17:27