In this article, I present my revised combat rules for the 7th Voyage rules, by Crooked Dice.  Straight away, the question is: why modify anything at all?

Well, I've always wanted to play games that recreate episodes from Greek myth (or rather, from movies about Greek myth such as "Clash of the Titans").  This is exactly the point of 7th Voyage and so when it was published, I bought the rules and played a few games:
As you can see, in 2015/2016 we tried these rules exactly as written, but it just didn't feel as exciting as it might have done.  Command & control was fine, the scenarios were good, the magic system (which we barely scratched) seemed workable.

What fell flat for us was the combat system.  Once 2 models were in combat, there seemed to be an endless stream of dice rolls (to hit, to wound, saves for armour, shield or mystical force), with the only outcomes being either injury or nothing at all.  Sure, the rules allowed an attacker to attempt to knock down their opponent instead of striking for damage - but who would ever choose that option? 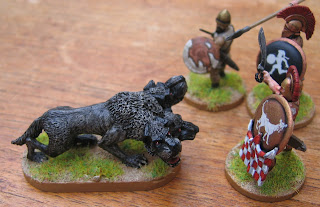 Compare this with another set of rules that I use (though not for this type of game): Song of Blades and Heroes.  In that, the combined results of a single die roll by each of the attacker and defender determines whether either is pushed back, knocked over or killed (or even killed gruesomely).  Note also that this is accomplished in a very simple manner; it doesn't require any table lookup or anything like that - just the application of a few simple rules.

Using Song of Blades and Heroes, we have had some really swashbuckling games where sword fights between the good hero and their evil protagonist have moved all over the scenery.  In particular, I recommend "Robin Hood and the Forest Road" (or here for the thrilling conclusion, if you're too impatient to read the whole thing). 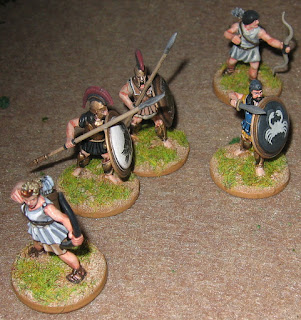 So, I want heroes to be forced to the ground by the weight of the monster's crushing blows, before summoning up a lucky strike to the bad guy's vitals.  I want soldiers to have to watch their step when fighting on a cliff top (or rampart, ship...); if they give ground then they may be in for a fall!  I want combat to be resolved quickly and easily with a minimum of dice and statistics, but with a variety of possible outcomes for each attack.

What you see below is my attempt to meet these goals and breath fresh life into 7th Voyage.  To distinguish my house rules from the base set, I'll call my version 8th Voyage.

So far, 8th Voyage has been tested in these battles:

The basic rules of who and when an attack can be made remain unchanged from the rules found in the 7th Voyage rulebook.

A couple of adjustments to facing are permitted to a defender:

The mechanism for resolving an attack is changed as follows.  Note that this is strongly inspired by, but not completely identical to, the Strike rules in 7TV (2nd edition):

6. Determine the Effects of an Attack

If the strike result is equal to or greater than the defence total then the attack has been successful and the defender takes the normal status effect and/or damage from the hit.

Note: even if the damage and/or status from the attack is cancelled by a push back or knock down, it still counts as a hit.  That will be academic in most situations, but some rules may have other results which are neither damage nor status.  For example, the Hurl special effect allows a defender to be thrown 2" and knocked prone on a successful hit.  This is neither damage nor a status and therefore the result of this effect cannot be cancelled or avoided.

The Defence value is calculated as the original ‘Def’ value, plus 4.  Here are some examples:

The Strike value for an attack is calculated from the data for the original 7th Voyage attack using the following formula:
Strike = 8 + Weapon Str  – Hit number (- 1 if the attack is unarmed).
This assumes that a weapon or natural equivalent such as claws or horns is in use; subtract 1 for an unarmed/brawl attack.
Here are some pre-calculated Strike Values (for weapon attacks.  Remember to take 1 off for an unarmed attack):

Unless noted here, there is no change from the rule as written in the 7th Voyage rulebook. 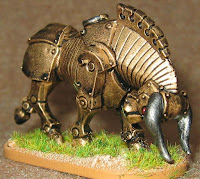 Unless noted here, there is no change from the rule as written in the 7th Voyage rulebook.

For what it's worth, the probabilities of an injury are much the same in 8th Voyage as in 7th Voyage, at least in some situations: 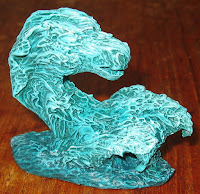 This a work-in-progress and although I'm reasonably happy with the reworked rules above, there are still some questions in my mind: