My #2 son and I have been attending the Claymore wargames show in Edinburgh for a number of years now.  It's always on in early August, so last weekend we took ourselves across the country for this event.  We had a good time, but perhaps not a great one, as you will find out if you read on.

As always, we played some games, did some sightseeing and bought some stuff.

We had seen this game at at least one other Scottish show earlier this year, but it always seemed to be booked up.  This time, we were early and played a quick, 2-player match.  I took the local sheriff, his 2 deputies and a couple of upstanding citizens who had volunteered to help.  Opposing me, my son had 5 bandits; these had a secret agenda and I was not aware of their plans.

This game was short and brutal.  In part, that was because of runs of good & bad dice by the respective sides (the sheriff's men were probably rolling above average and the bandits below par).  However, I couldn't help feeling that it would have been a much better experience if there had been more players.  At the very least, there wouldn't have been the same temptation to just march into the centre and open fire with everything 😃. 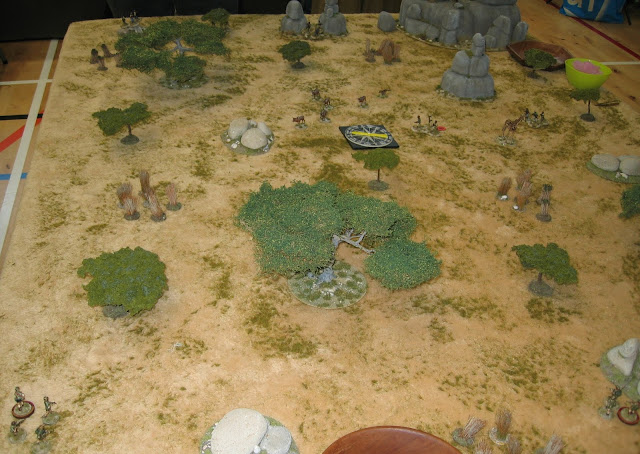 Just before lunch, we stopped at a very nice-looking table and were invited to play a game on it.  This was a co-operative affair, with A. and I each taking a 4-man squad of elite Rhodesian light infantry to try to rescue and extract some scouts (these were hiding out in the large rock formation at the far end of the table).  Of, course, the area was swarming with ZAMLA (?) militia...

The game mechanics involved movement from landmark to landmark.  Some of these landmarks provided soft cover, some were classed as hard cover and some gave no cover at all.

In the very first action of the game, one of A.'s troopers was shot dead whilst crossing open ground in an attempt to find cover.  This seemed like a very bad omen, but our 2 squads then managed to leapfrog most of the way up the table without taking anything worse than the occasional pin or suppression marker.  In return, we saw off large numbers of enemies. 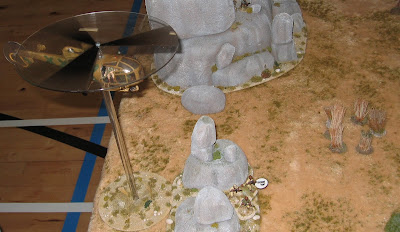 At one point, we called in a gunship helicopter.  It proceeded around the edge of the table creating havoc amongst the ZAMLA troops, until it reached the far end... 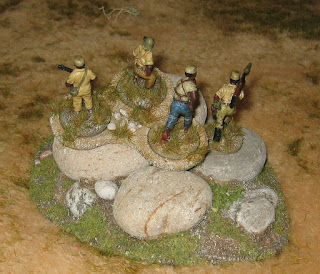 ...where it came across the one enemy squad that was armed with an RPG.  A lucky shot from this weapon saw our gunship crash and burn, much to our disgruntlement! 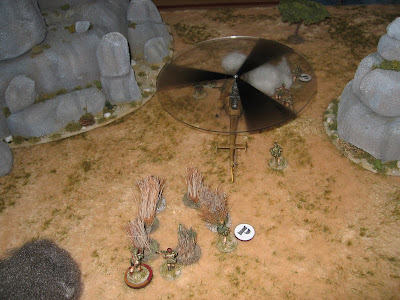 Finally, we reached the scouts and called in our evacuation helicopter.  I think the pilot was cursing us roundly for having chosen such an awkward landing spot, but he managed to put the aircraft down safely.

The 2 scouts and the 3 remaining members of A's squad embarked without too much difficulty, but ZAMLA troops were closing in.  Despite our use of smoke grenades to try to obscure our forces, the helicopter took several bullets and my squad leader was pinned down. 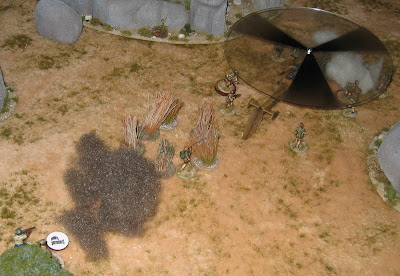 With everyone else on board (including the 2 scouts, on whose safety victory or defeat was solely determined) , the pilot took off without waiting for my last guy.  Plenty of militia shot at the helicopter as it left, but somehow it managed to stagger away, damaged.  We had won the game!

This was a very engaging game, with high levels of tension throughout.  The models were nicely done; the scenery was excellent and our hosts were friendly and enthusiastic.  Congratulations to them!

My only mild disappointment was that the wildlife was purely decorative; the cheetah, antelopes and girafe played no part in the game 😃.  Also, I feel bad about abandoning my squad leader...

I don't normally take many photos of non-participation games, but this one stood out for me. 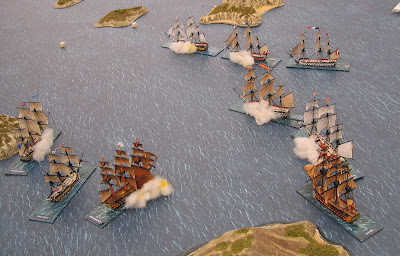 It was a very beautiful Napoleonic naval game put on by (I think) the "Border Reivers".  Models were 1:600 scale, so the larger ships were probably around 6" (15cm) long. 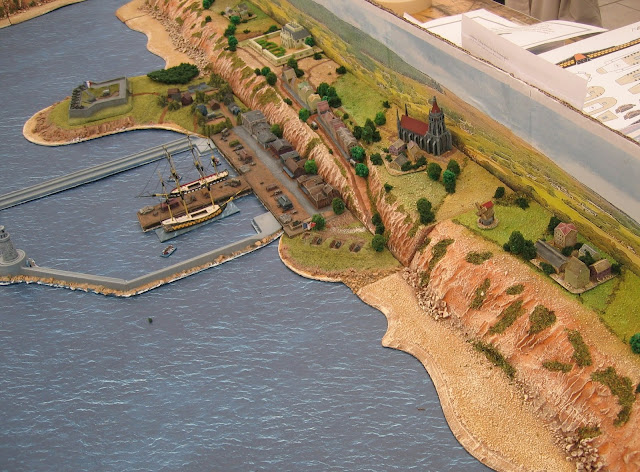 They had a rather nice coastline running along one end of the board, with a port and associated gun emplacements.  The scenic backdrop definitely helps to give the illusion of depth here! 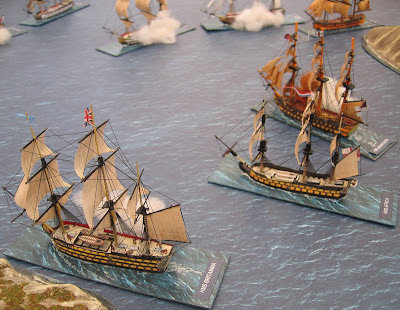 For me, one of the most stunning parts of this display was to discover that the ship models were paper!  That's right; each design is a print-and-build PDF document with instructions on the gauge and lengths of wire to be used for the rigging.

I was told that they were quite simple to build, but I've done quite a bit of card modelling in my time and I'm impressed.  They may be straightforward to make (though I have my doubts ), but each ship must have taken a considerable amount of time to finish.

Of course, once the initial design has been bought, it can be reused as many times as desired.  I was shown some crippled and/or sinking models that had been made from the same kits, though these were not needed at the relatively early stage of the battle in my photos.

For my own reference, I took some pictures of a large Omdurman-campaign Sudan game.  I was more interested in the scenery than the Mahdist vs British action (though the figures were very nice too). 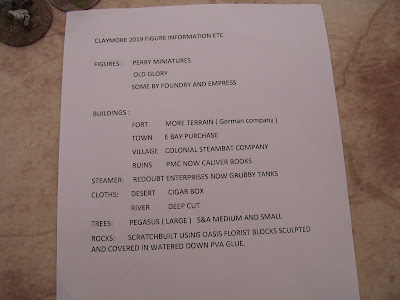 Fortunately for me, they had a "cheat sheet" listing where all the components had been found. 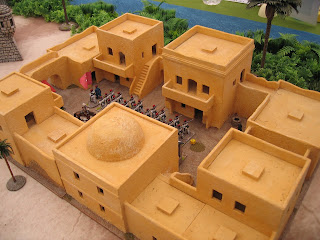 Unfortunately, the Arab town is only listed as "eBay purchase", which doesn't really help me at all.  Oh, well. 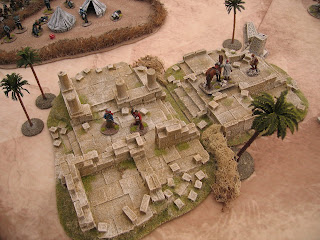 On the other hand, the ruins are ex-PMC, now available from Caliver Books.  I would never have thought to look there for items like that, but I think it quite likely that I'll purchase these in due course now that I've seen them.

I had quite a long list of items that I wished to find, although most of these were "might be nice" rather than "must have".  In the end, I found most of them, with one very big exception (more later on this).

Our purchases were enhanced by tombola wins from the SSAFA charity stall.  We were one of the first groups (if not the very first?) to buy tickets.  Out of 8 tickets each, I won 4 prizes and A. won 3; this is enormously above my expectations for such an event!  Indeed, we were so embarrassed by this that we immediately donated about half of our wins straight back, so that the charity could reuse them.  Mind you, this isn't altogether as altruistic as it sounds; these were items that we didn't have any use for; they would just have gathered dust and taken space had we kept them. 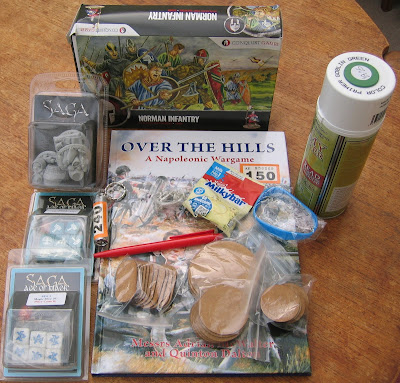 So, my loot pile is as follows: 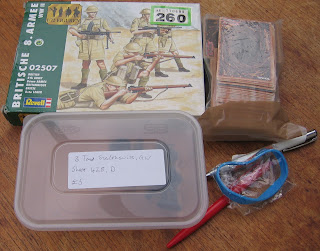 A. had enough of a loot haul to warrant a separate picture:

Edinburgh is quite a long drive for me; it's very tiring.  On the trip homeward, I had to stop in Stirling just so I could find some coffee and take a break.

So, this ends the show season in Scotland for 2019, at least as far as I'm concerned.  It's been a busy year, with 2 new events in Glasgow (one was a one-off; the other will be repeated next year) as well as my regular attendance at Carronade and Claymore.  Now that the shows are all over, I need to find time to paint some of the stuff I have accumulated!
Posted by Colgar6 at 23:00