<== See here for the previous installment

Pushing further into the interior of Perilous Island, Sir Henry's party struggled through a sticky, humid swamp.  The rank, coarse growth limited visibility to just a few yards and oversized insects buzzed around annoyingly.  Larger creatures moved in the undergrowth; the safari could hear them but not see them.  This was clearly the way that the lost Darrow expedition had travelled - but the natives at the last stop had claimed the area was cursed and inhabited by terrible "vizuu", whatever they might be...

As usual in our campaign, we had 3 leagues for our game: 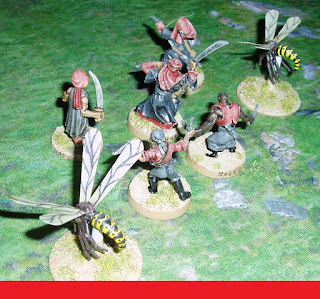 The cult is led by Al Masudi and his giant snake pet (not pictured, as its entry was delayed for this game).  As usual, he's accompanied by his 3 faithful lieutenants and his favourite grenadier.  Also as usual, Al Masudi has used his dominion power to control some of the more exotic local wildlife; in this case a pair of large waspquitos.  You didn't know that he was a keen student of nature, did you? 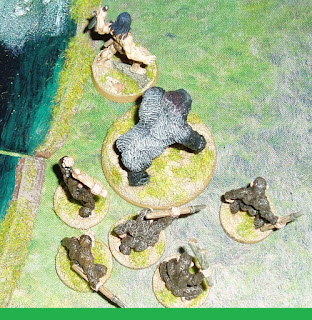 Tarzan is followed by Koko the gorilla and a band of simians led by Caesar.  On this occasion, there was an extra ape in the troupe, though I can't remember exactly which game effect permitted this.  Probably a random event? 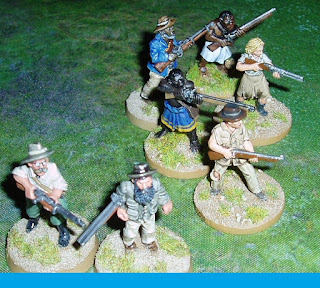 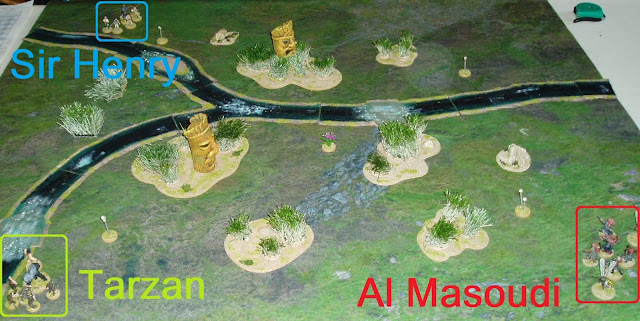 The swamp is full of menace, sticky mud and buzzing insects.  There are several patches of raised ground covered with thicker vegetation; 3 of the largest are sacred places (2 ancient statues and one skull pile).  Each sacred place can be searched for clues, though each team can only find a maximum of one clue per location per turn.

As well as the normal perils which might be encountered due to hostile card play, perilium zombies will drag themselves out of their shallow graves at the start of each turn.  Roughly 1-3 new zombies will appear per player, per turn; each player can choose the spawn location for the creatures he/she generates.  [Note: my collection of generic, non-20th century urban zombies is limited in numbers.  On occasion we ran out of zombie models and used giant swamp rats instead.  These rat models had exactly the same game effect as the zombies.]

The first turn was pretty much as might be expected; all leagues advanced towards their nearest sacred place.  They were all too far away to attempt any plot points or to be able to shoot at each other [this game was played 2 months ago and I have only just got around to writing it up now.  My memory isn't perfect - maybe someone had rolled the "limited visibility" random event before play began?]

Then, something extraordinary happened, though it took a while for the full ramifications to sink in.  By turn 2, we had an unprecedented three "must play immediately" cards on the table [these are rare; many games would never see a single one occur].  Now the first 2 were nice enough, but the 3rd card - "Blood and Glory" - was the real game changer.

In case you cannot read the 3rd card, here's the kicker: every time a character won a fight, their league would gain +1 Reputation.  The table was generating zombies each turn.  Zombies are relatively easy to kill.  Suddenly, the previously-obvious tactic of placing the zombies to impede your opponents wasn't the only choice; placing them close to your own characters could let you gun them down and therefore be rewarded for winning more fights.  Hmm...

That was one of the oddest games of Pulp Alley that we've ever played!  In most games, the objectives are everything and much effort is spent trying to claim them.  However, in this game it was extremely difficult to even attempt an objective - either because your characters couldn't reach the sacred areas because they were blocked by zombies or because once they had reached these zones they were fully defensive against multiple zombies.

Mind you, I think we may have accidentally strengthened the zombies by giving them a health of "d6" rather than "d6*" as written in the scenario.  That meant they would sometimes return to their feet after being felled - it's more characterful, but not what the author intended.  Next time we must read the small print more carefully!

I know that Tarzan scored 2 rewards, if only because I have the photographic evidence.  My memory is extremely hazy on this, but I think that both the Safari and the Cult scored at least one each - maybe two.  I'm pretty sure none of the leagues found 3 objectives.  But all sides increased their reputations considerably by killing numerous zombies 😁.

So, another great game, but where next?  Further into the interior of Perilous Island, or back to the lagoon?  We'll find out in the next exciting installment!