Well, I've managed to survive Zomtober for another year.  This is the last Sunday of the month, so with this post I have completed the challenge for 2020.  Doesn't it feel good 😁!

So, without further ado, here's another zombie/survivor duel. 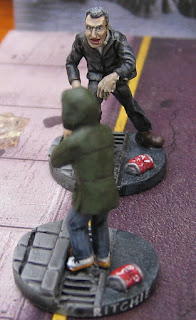 This "duel" is between "Ritchie" - a survivor and "dapper old zombie" ("DOZ").  Now, I try not to judge, but I don't think that Ritchie is the sharpest tool in the toolbox.  For starters, he cannot spell his name correctly (or at least, using the more common form: "Richie"). 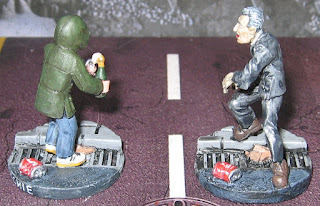 For the first time ever in a Zomtober pairing, I realised that I mounted both of these figures on identical bases.  Too bad - when I noticed the duplication it was much too late in the month to produce another, different model for either or both participants.
Ritchie is one of Offensive Miniatures "Street Kids", whilst DOZ is from Studio Miniatures.  I think the latter may be from a pack of "celebrity" zombies rather than rank-and-file, but if so then I don't recognise the reference. 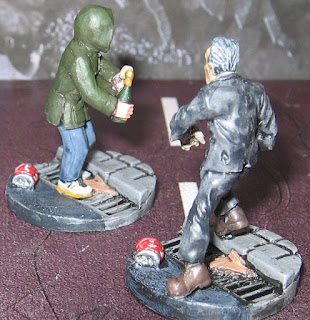 Ritchie is armed with a petrol bomb, which has been universally ridiculed by "experts" as a terrible anti-zombie weapon.  It's hard to light and throw accurately - and even if you succeed in this then flames won't necessarily incapacitate a charging foe.  Instead, you'll simply be mauled to death by a burning zombie. 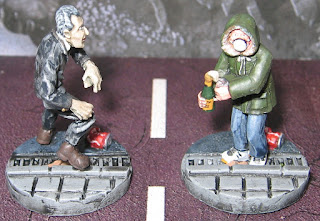 I believe that Ritchie has added yet another level of incompetence to the mix.  It looks to me as if he's using a champagne bottle for his Molotov cocktail.  Such bottles are very thick-walled and strong (so they don't blow apart when full of "bubbly").  I wonder if it would shatter and ignite the petrol when it hit the target, or merely bounce off and lie smoking in the gutter?
This survivor does get credit for heavy clothing and a face mask, though.  These may slow down or impede zombie bites and protect somewhat against splashes of infected blood.

The question, as always, is this: what happens next?  DOZ seems quite fit and active (for a zombie) and appears to have the edge in awareness as well.  I suspect that Ritchie's only chance is to weather the initial onslaught, break free (possibly discarding his anorak to the clutches of the zombie) and flee...
Skip forwards to Zomtober 2021 ==>
Posted by Colgar6 at 19:14