It's another Sunday in Zomtober!  [If you need help in understanding Zomtober then look up some of my earlier posts; I'm not going to explain it every time].  So, as is my custom, here's a "duel" between a survivor and a zombie.  Your job is to decide "what happens next?" 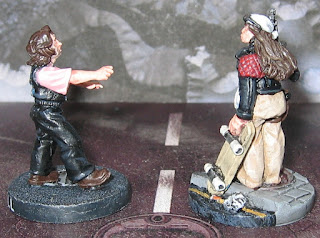 Today's pairing is a bit unusual (even for me), as the zombie has a name ("Bill") and the survivor doesn't.  In the latter case it's because I forgot to give her one; perhaps my readers could suggest a suitable name?
Anyway, for the rest of this article I'll call her "SG".  It's less of a mouthful than "skateboard girl". 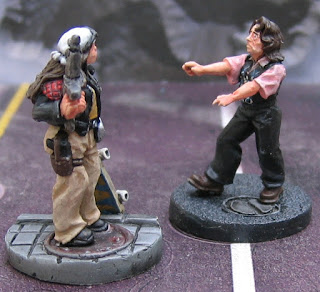 So, I think the first question is this: is Bill a zombie at all, or is he a survivor who is posing as a zombie.  He might have reasons to do this, either to move more freely among real zombies or to scare off the less-determined surviving humans. 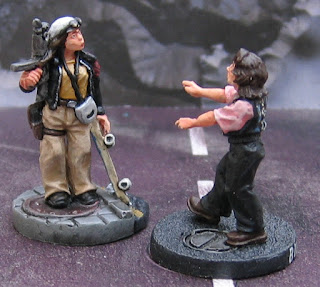 If it's just a ploy, I think it's a dangerous one.  SG appears to be lost in thought, or possibly is just humming along to whatever music is playing on her portable CD player.  Either way, she's about to be startled when she suddenly notices Bill's presence.  What will she do next?  She's heavily armed and seems strong and healthy (she's quite a big lass). 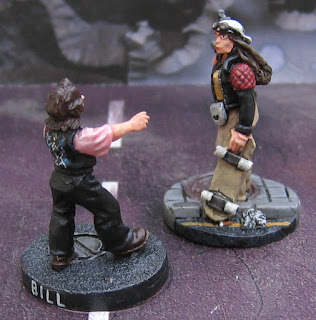 "Bill" is from Studio Miniatures; he comes from one of their slightly more specialised packs of zombies (as opposed to being one of the "horde").
SG is another model from the Street Violence range, sold by Wargames Foundry.

I'm quite pleased to be finishing some of my older Foundry models this month, after many years of neglect.  It's not much in material terms (the lead pile is still enormous), but mentally it makes me feel like I'm making progress.  Given another century or two I might even run out of unpainted figures, who knows?
So, questions:
Only you can tell...
Forwards to week 4 ==>
Posted by Colgar6 at 13:34