Today's offering is my first foray into Japanese fantasy miniatures.  I've built plenty of fantasy models before, as well as a fair number of historical Japanese figures (well, some might argue that my black-clad ninjas are fantasy rather than historical - but at least they're human).  But until now I've never tackled Japanese fantasy figures.

I wouldn't have built the miniatures below except that I happened to see them in the Bad Squiddo range.  I fell in love with them immediately and made it a priority to buy and paint them! 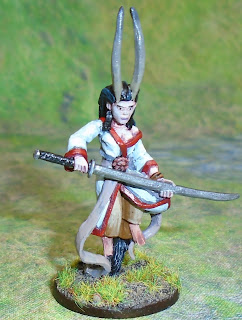 At first glance, Bad Squiddo's "Blood Sorceress" figure is of an apparently young and attractive Japanese woman.  With a very big sword.  And extremely long horns.  And she's not walking, but rather floats through the air.  So probably not a normal person, then. 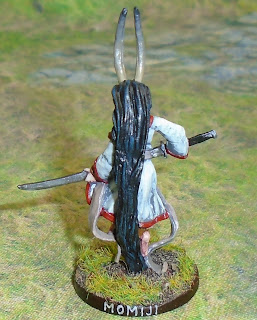 I did a little research on depictions of Japanese ghosts and witches before painting her.  The impression I received is that they are often depicted as having traditional costume and equipment, but are maybe a bit paler in colour than average.  I've tried to make her clothing and skin fairly pale (well, apart from the red accent on the border of her robe). 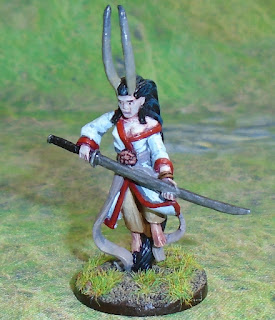 Apparently there aren't many named witches or sorceresses in Japanese folklore - or at least as an outsider I wasn't able to find such information.  In the end, I chose to call her Momiji, which apparently translates roughly as "red-turned maple leaves".  Is this suitable?  I don't see why not... 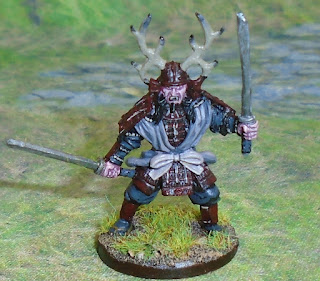 In the same pack from Bad Squiddo, the blood sorceress has an undead manservant.  This model could be used as a regular, living samurai without any difficulty as there really isn't much that insists on his status. 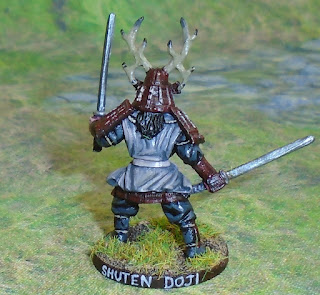 However, I wished to keep him as Momiji's ghoulish assistant.  In contrast with her pale appearance and clothing, he is finished in a dark colour scheme with reddish purple overtones.  I suppose I was aiming to suggest a demonic origin; hopefully this is obvious. 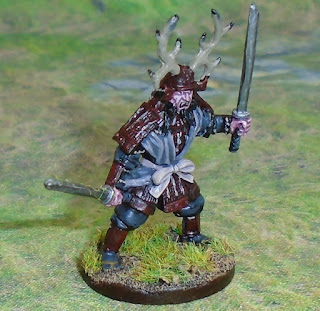 I've given this model a name too: he's Shuten Doji.  That name does come from traditional Japanese folklore: he was a demon or oni.  This seems appropriate for my figure.

I'm not sure how I'll use these figures yet.  My preferred rules for Sengoku-era skirmishes (Test of Honour) don't have any provision for mythical or magical creatures & monsters.  Mind you, I imagine that if I looked around I would find that someone has published house rules for such.  Alternatively, I could just use them as models with regular abilities, for now.

Either way, I'm very pleased with these figures!