Seven Samurai, Kurosawa's masterpiece, has been one of my favourite films ever since I first saw it.  The story has been repeated and remade so many times that I've lost count.  Many people will recognise the plot; it has been transposed into other settings such as Western (The Magnificent Seven) and Science Fiction (Battle Beyond the Stars).

Until recently I could only dream of being one of the small band of heroes facing off against huge numbers of bandits, at least in a game.  Then, Footsore Miniatures released a pack for the Test of Honour game called "Seven Ronin".  Of course I rushed out and bought these models, but then life got in the way and it took me quite a long time to paint them.  Still, here they are, at last.

Kambei is the leader of the seven.  He is getting on a bit, but is wise, experienced as a commander and proficient with his weapons. 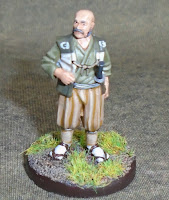 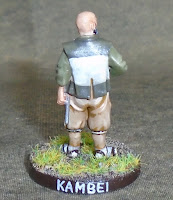 The taciturn Kyuzo lives only for the perfection of his swordsmanship and is idolised by some of his younger comrades. 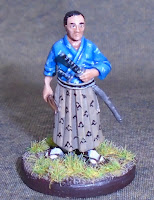 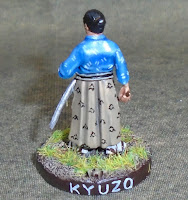 The tall Kikuchiro has strong emotions and is perhaps a little deranged.  Initially he has some difficulty fitting in, but finds his niche as an emotional bridge between the samurai and the peasant farmers they are sworn to protect. 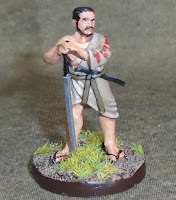 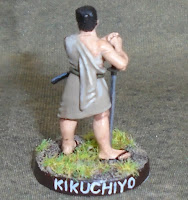 Katsushiro is the youngest and most innocent of the group.  He's independently wealthy and has tagged along for the adventure rather than because he needs to work for food. 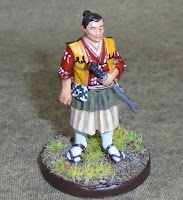 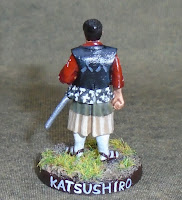 Heihachi is not the greatest warrior, but he is witty and charming. 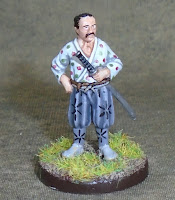 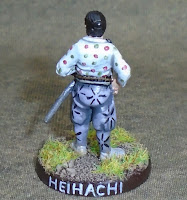 A capable, mellow and observant samurai, Gorobei is also a proficient archer. 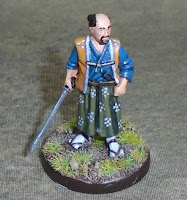 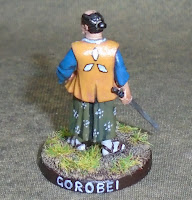 Shichiroji is an old friend of Kambei's - both thought the other one dead before meeting up at the start of the story. 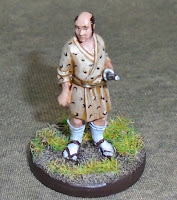 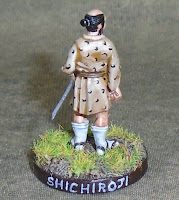 For the most part, I've let the pictures above speak for themselves.  For anyone who wishes more information on the characters, the story or the film, the internet is awash with reviews, synopses and analyses.  But seriously, if you haven't already seen the movie then why not?

On the figures: Footsore have produced some extraordinarily fine representations of the characters from the movie.  I have some concerns that the realistic-thickness swords may prove  a bit flimsy for gaming models, but apart from that these are very fine figures.

Since the original film is black & white, it's difficult to find primary sources for the colour schemes.  There are a few secondary sources (such as later collectable models and book illustrations) which depict the seven in colour, but these aren't consistent with each other.

In the end, I've chosen colours that seem plausible to me and I've tried to copy at least some of the patterning on their clothes, usually simplified a bit to fit my skill level.

OK, now I need a whole load of Japanese bandits.  And a village.  And villagers...