So, there haven't been any wargames shows in my part of the world since the coronavirus pandemic struck here in March 2020, some 18 months ago.  Indeed, I suspect that the last show I attended was Edinburgh's Claymore in August 2019; that's more than 2 years ago!  I've really been missing such events.

Normally, Falkirk's Carronade show would be held in May, but this year (2021) it was postponed until the end of September.  For much of the summer I - and, I imagine, others - were waiting to see if there would be further restrictions which might cancel the show.  Well, there weren't, the show did go ahead and we did attend.  Here's how my day went.

Unusually, my son and I drove to Falkirk rather than taking a train.  This was because my wife and daughter were due to attend a dance competition only a few minutes drive away from Falkirk (the first time they had done such an event in almost 2 years as well).  I'm a bit rusty with driving long distances, not having done much of that for a while, but it was uneventful.  Neither weather nor other human beings caused us any difficulties.

Carronade 2021 did feel a bit different to previous such events.  For starters, there was the distancing within the entrance queue and the collection of contact details by the show organisers.  Mask-wearing was compulsory, at least whilst moving around (there's some debate about whether it is really permitted to remove masks when sitting at a table indoors for any purpose other than eating).  Adherence to this regime seemed pretty much universal and uncontroversial.

Other than masks, the main effect of virus precautions on the show seemed to be fewer public participation games than I would normally expect.  I haven't compared the advertised numbers from various years; it just felt to me that these were more sparse than usual.

My son and I did play in one participation game: we took part in an alternative version of the Battle of the Denmark Strait.  In this entirely plausible scenario, while the capital ships HMS Hood and HMS Prince of Wales were engaging the German battleship Bismark, the shadowing cruisers HMS Norfolk and HMS Suffolk engaged her consort, the Prinz Eugen.

So, it's 2 Royal Navy heavy cruisers against one slightly larger German heavy cruiser.  This isn't really a battle that the Prinz Eugen can afford to take part in, let alone have much hope of winning - so the German's victory condition is simply to escape. 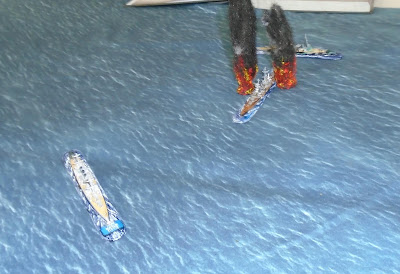 My son and I each took one of the British cruisers.  We were using (I think) Warlord's "Victory at Sea" rules.  It soon became apparent that winning initiative for the turn made a big difference; my son won the roll-off every time.  While the German cruiser did land some hits  on the Royal Navy ships, the game ended abruptly when HMS Suffolk landed a crashing salvo of 8" shells on the enemy ship, followed up with 2 torpedo hits (despite the Prinz Eugen only presenting a small stern target).  This blew the German to pieces, so we went away victorious!

I'm a bit dubious about these rules, mind: it felt a bit as if we were dog-fighting with heavy cruisers and I don't think that's really how it would have happened.  Still, our experience of the game was only 20 minutes or so.

A few large tables caught my eye and we spent some time examining all the details.  Unfortunately, I was carrying a new camera and it seems either highly sensitive to shaking hands or else its automatic focus isn't so good.  A number of the pictures I took are heavily blurred and unusable.  Hmm.

Still, here are some images... 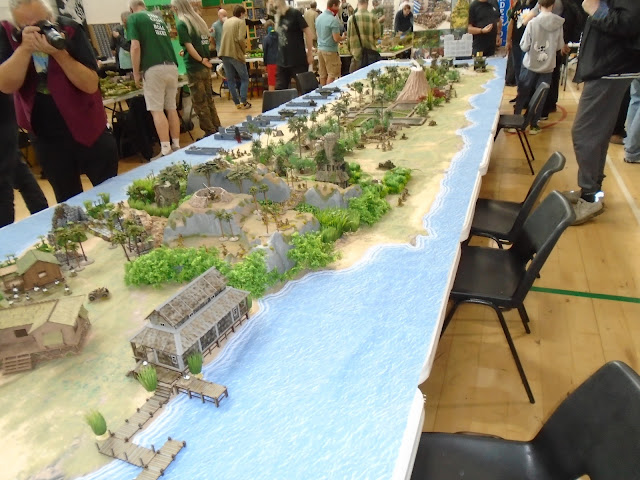 At first, I thought this was some form of Pulp setup, mainly because of the jungle ruins and the smoking volcano.  But no - it seems to have been a WW2 amphibious landing.  Still, it was pretty and had a lot of nice details. 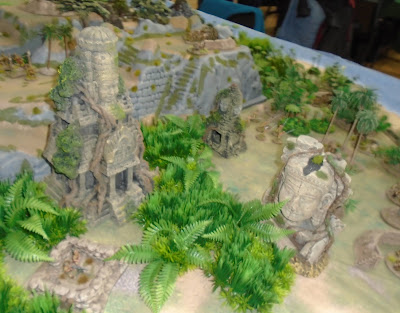 The table had some impressively large, overgrown temples & statues in the jungle... 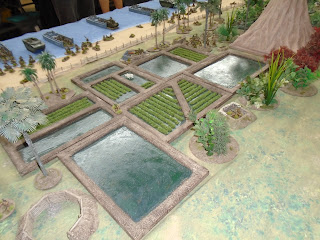 ...as well as a decent set of rice fields.  These are very similar in style to my own versions, though larger, deeper and more numerous.  Note to self: I need more paddy fields! 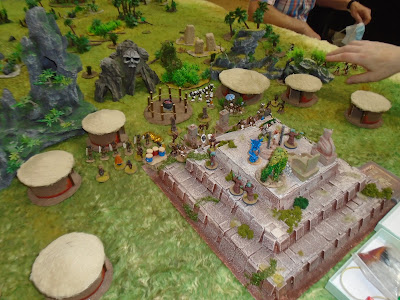 The other table that really caught my attention was the Congo Bill adventure.  I understood that this was more than a standard game of Congo.  It had many pulp features such as a maiden sacrifice and giant gorilla, but in addition to this the organisers were gleeful in telling us about the Cthulu-esque monstrosities that they had planned! 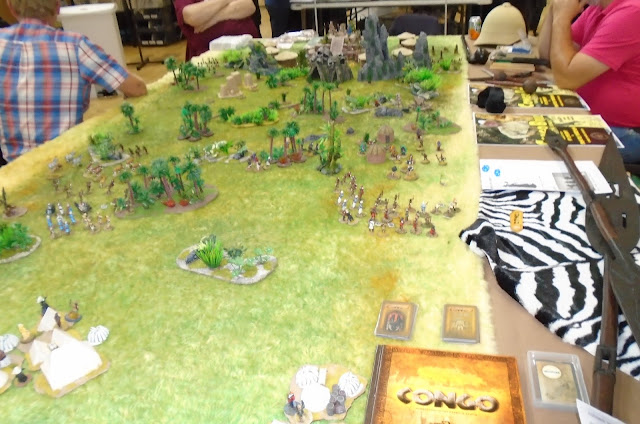 I didn't manage a really good shot of the whole table, but this slightly blurred version will have to do.  As well as all the explorers, there was a group of nuns/missionaries, large amounts of wildlife and (of course) copious natives.  This was all very much to my taste. 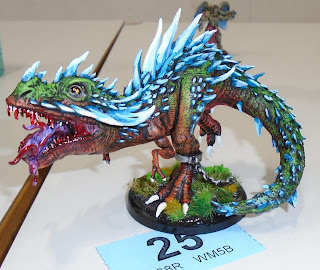 I always take a look at the entries to the painting competition at a show, but I don't think I've ever mentioned this in a report before.  This time, the model above caught my eye.  I don't remember seeing it ever before, though my son wondered if it was a 3D printed piece rather than a "regular" commercial model.  Either way, I thought it was beautifully done! 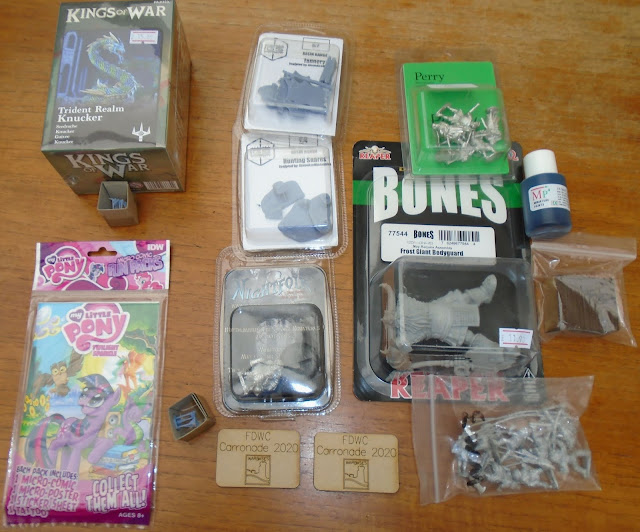 I hadn't expected to buy much at the show (I'm trying to cut down on new projects, for a start!), so I was surprised at just how much I found when I opened my bag on my return home.  From bottom left, going roughly clockwise:

It's good to be back at shows!  We (or at least, I) caught up with friends and bought more than perhaps I should.  We played a game (more would have been nice) and even the drive home again wasn't particularly difficult or stressful.  More, please!