What I did on my holiday...

Every summer, we try to take our young family away for one or two week's holiday.  There have been one or two times where this didn't happen, typically because of great uncertainty over job security and the consequent reluctance to spend any money.  However, this wasn't such a year and we've just returned from 2 excellent weeks vacation in Dumfries and Galloway.

I've always tried to take some model-making stuff with me on long holidays.  There's always some quiet time at some point in the day - maybe after the children are in bed in the evening or perhaps after breakfast but before going out for the day.  I like to make use of these interludes to keep up my hobby.

In the past, I've taken primed miniatures and paints, but this hasn't worked very well.  The long(ish) drying times mean that the setup cannot be moved quickly, the models are difficult to pack safely and taking a small range of paints means that I always find I'm missing one that I really need.  Instead, I've taken to building card vehicles for ATZ or similar games. 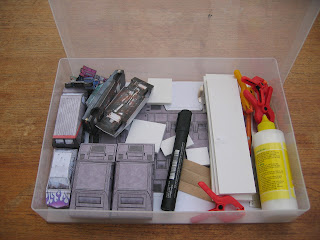 So, here's my holiday model-making travel setup.  It all fits in an A4 box that was designed for scrapbooking.  Actually, I use a lot of these boxes (and their A5, A6 and "peel off sticker box" cousins) for storing models as well, but that's not really relevant right now. 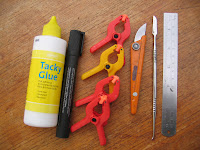 On the way out, the kit holds the tools I'll need.  Most important are the knife, steel ruler, scribe and glue.  A few clamps can be useful and a black marker or felt pen for edging is pretty much essential too.  I've also included some offcuts of foamcore, to use as stiffeners for vehicles with large, flat sides or underbellies. 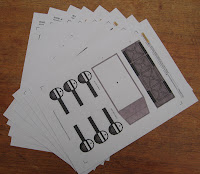 Finally, I include a number of card sheets with the desired models printed on them.  Obviously these need to be prepared before leaving on holiday, but that's not too onerous a task.

This year I thought that I'd build some military vehicles from the Ebbles' "Convoy" and "Patrol" sets (the contents of the latter now appear to be sold separately as the APV and GPV).  These have been on my wish list for some time as they would be useful for playing any of the military scenarios from ATZ: Haven.  I also took a small assortment of models from the old Mayhem vehicle collection and other WorldWorks kits. 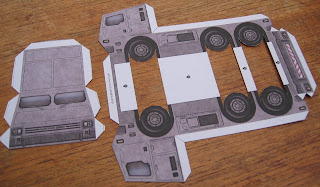 So, how did it go?  I started by carefully cutting out the first sheet for one of the Convoy trucks.  Immediately I discovered that I hadn't measured the foamcore offcuts I had with me; all were too narrow for this big boy.  Argh!  Bang goes my idea for building all the transport vehicles I had intended...

Next up was a sheet with 3 motorcycles on it.  These are large touring bikes, I think, rather than trail bikes or mopeds.  The builds were surprisingly straightforward, if a little tedious due to the number of pieces for each bike and the small size of the components.  A bonus was that the chassis is exactly the right size to be wrapped around a small piece of 5mm foamcore for extra rigidity.  Surely this is just fortuitous; WorldWorks would never have thought to design it that way - or would they?  My respect for those guys is always growing. 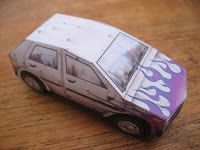 The custom-painted compact car was an easy model to make.  I've done a number of the same shape before in different colours and the only real trick is to cut the front of the vehicle from the body and glue it on separately (otherwise it doesn't fit as well as it might).  Perfect for the aspiring boy racer. 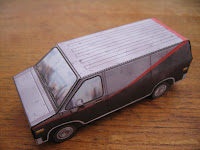 The van is one of the easiest WorldWorks vehicles to make (only the bus is simpler, I think), although the finished model looks a bit small when compared with the WWG cars.  This one is in the livery of some touring troupe of do-gooders called the "B team".  Anyone ever heard of them?

Last year (or maybe the year before that) I printed a sheet containing a black and a white sedan, but never got round to building them.  This year I thought I should do so.  Now, the WorldWorks sedans are a bit pidgeon-toed if built "out of the box", as the wheels align with the slopes at the front and rear of the bodywork.  In all apart from my first 2 or 3 builds of this kit, I've made some adaptations to allow all the wheels to sit parallel with each other. 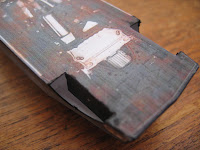 This modification does require the use of fully-round wheels rather than the half-round ones that come by default.  Somewhere I have an entire A4 sheet of such wheels, edited from the original by doubling the length of the tread on the tyre and adding a full second side.  This sheet should supply more sedan wheels than I'm ever likely to need - but I forgot to include it in the holiday pack.  So for now, these cars have no wheels. 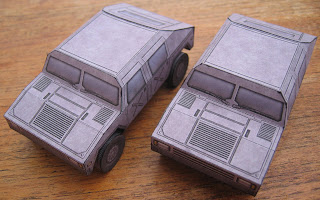 Finally, here are a couple of the Ebbles' GPVs.  These are very frustrating models.  They mostly fit together very well, but I hate the wheel arches!  The first GPV I made from the bottom up; the wheel arches were fitted into the body shell before the front and back of the vehicle were attached.  This was a bit fiddly and I wasn't entirely happy with it.

For the second GPV, I changed my approach and fitted the wheel arches, the front and the back panels to the upper body before attaching the underside.  Big mistake!  It proved impossible to glue the bottom of this model neatly and the whole construction is warped considerably (one corner of the underside is maybe 2 or 3mm higher than the other three).  Careful placement of the wheels means that an observer probably won't be able to tell, unless they turn the model over and look at its belly.  Still, I know - and now so do you.

The model box was padded with some spare socks to stop everything rattling about for the return journey, so it all arrived safely.  I'm not sure that I'd want to take my travel pack with me if I was flying, though.  Even if the constructed kits didn't get damaged with rough handling, the sharp knife and bottle of liquid might just make airport security a bit too interested.  Still, for a car journey this works just fine and I made up some useful models for which I wouldn't have found time otherwise. 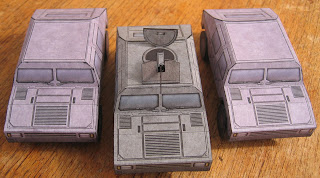 There's another part to the sorry tale of the military vehicles.  On my return home, I compared my 2 new GPVs against the 2 I had already made.  As you can see from the picture above, the earlier one is in a different colour scheme from the recently-built model.  Which means that my existing 2 GPVs and 1 APV are not the same as all the Convoy and Patrol stuff I printed out just before my holiday.  I should have checked first.  Bother.