What's in the Box? Cargoes for Starships.

A few months ago, I described someone else's idea for adding colour to Full Thrust or similar games that involve miniature starships: Damage Control to the Disco Lounge.  The table presented there adds "non-critical" damage to spacecraft and this gives the players something of a feel for the lifestyles of the crews under their command, if somewhat tongue-in-cheek!
This is all very well for military ships, but it doesn't work for civilian vessels; too many of the non-critical hits aren't really appropriate.  In most of the games of Full Thrust I have played, freighters have been simple targets without any real sense of personality.  This article attempts to redress the balance. 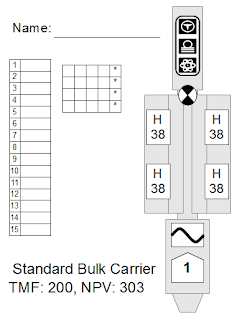 Every freighter or passenger ship will have space - probably a lot of space - allocated to its cargo.  By the way, I'm not intending to suggest anything pejorative by describing passengers as "cargo"; it's just a convenient term to cover all things that are transported from one place to another.  In Full Thrust, this cargo space is typically divided into 4 or fewer holds ("H" in the Ship Status Display above) or passenger areas ("P").
If the game scenario dictates what the freighter or starliner is carrying then that's simple and the rest of this article will be irrelevant.  However in most games this will not be the case, especially if your playing style is anything like mine.  So what is the merchantman carrying?  Just roll on the appropriate table below to find out!
Firstly, a few notes:

Knowing what cargo was destroyed doesn't alter the balance of a game in any way.  However, it certainly helps to flesh out the story.  So, a convoy is attacked - but why are the merchantmen carrying luxury foods?  Is this part of a regular trade run to a well-off world?  Or is it a perk for the despotic warders on a grim prison moon?
If you wish to take this further then you could assign values to each type of cargo, to see how significant the loss is to the owner (beyond the cost of the ships themselves, of course).  Of course, you'll have to decide whether that Political Delegation is a group of corrupt senators on a jaunt (low value?) or whether it's a commission of inquiry sent to investigate wrongdoing in a remote colony (high value?).  Good luck!