A Long Time Ago in a Small Town in Germany...

Another Tuesday evening at the Helensburgh Games Club.  There are usually at least 6 kids wanting to play whatever game I host, so I'd better not disappoint them.  What to put on this time?  I know - I'll try out the Black Powder rules with my 6mm Napoleonic forces.  That'll learn them a bit of history, won't it! 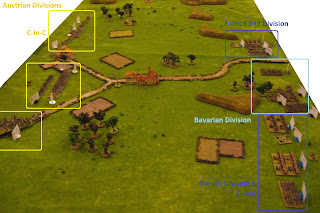 Since this is only the second time I've ever played Black Power and since there's no-one else present who knows the rules, I've tried to keep it simple:
Even with these restrictions, I'm sure I'll make mistakes in interpreting the rules under pressure.  As long as everyone enjoys themselves; that's what really matters!

The players chose name-cards for their commanders; there were a fair number of princes and archdukes on the Austrian side!  These names didn't have any game effect, but would (I hoped) help to set the atmosphere.  My pride in thinking of such a ploy was somewhat dented when I had to explain that the Austrian general "Hiller" was not the guy who led the Nazi party and that the French general "Grouchy" wasn't just someone with a bit of a sullen attitude.  I think that the players were just teasing me, but maybe not.  Oh, well! 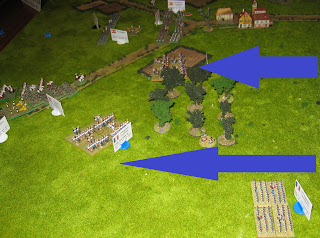 To start with, all the Austrian generals and most of the French just made trivial adjustments to the positions of their forces.  When it was his turn, the French commander-in-chief was clearly frustrated by this.  His first order of the game was to his 1st division: "advance towards the enemy as quickly as possible!"  The appropriate command roll was made and gave each unit in the division 3 moves; this took the 5th Hussars and the 2nd Carabinieres to within spitting distance of the Austrians on the road.  The French general was horrified.  "How far did they move?!" he exclaimed. 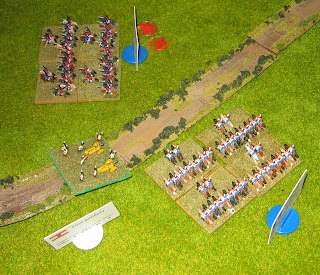 However, the French attitude rapidly changed to one of glee as the Austrian general attempted a complicated move (rather than relying on automatic responses to the presence of the enemy) - and failed the command roll.  The 2nd Jaegers in march column on the road were obliterated by the French cavalry, taking the Austrian brigade commander with them.  The hussars then swept forward into the Austrian Cuirassiers.  Caught in march column as well, these too were destroyed - though the hussars took some hits in the process.  It was only a matter of time before the nearby Austrian artillery was also wiped out by the rampaging French cavalry. 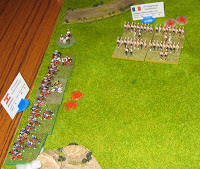 Only a desperate fight by the Austrian 4th Hussars managed to halt the Carabinieres.  Eventually, these French cavalry were sandwiched between the Hussars and an Austrian infantry regiment who had marched at the double from the centre; this was too much for the Frenchmen and they broke.  Still, the Austrian right wing was devastated! 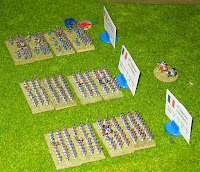 Encouraged by this, the far French wing advanced.  Their infantry columns made an impressive sight, flags flying and drums beating as they marched forwards. 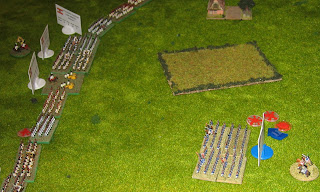 However, there was a solid line of Austrians waiting to receive them.  The Frenchmen were battered by a storm of musket and cannon fire; first one unit and then another broke and fled.

Finally, the Bavarian brigade in the centre decided to advance.  There was little in the way of opposition in front of them and it looked as if they should push aside the shaken 36th Austrian line regiment with ease.  The Bavarian cavalry charged, expecting to rout their enemies easily.  They inflicted 3 hits on the Austrian infantry and took 2 in return - but every single one of these five hits was saved with a roll of '6'.  This left the combat tied; the cavalry pulled back, while the infantry took a break test which caused them also to retire.  Vengeful Bavarian artillery eventually put paid to the 36th, but the Bavarian advance had been stalled. 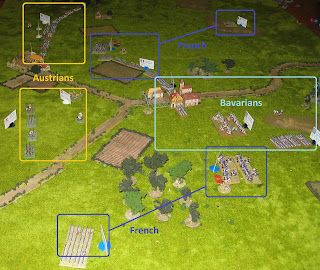 At the end of the evening's play, one Austrian brigade had been effectively wiped out.  The central Austrian command was damaged and in disarray, but the far brigade had just held its ground and wasn't hurt.  The 2 French brigades were both shadows of their former selves, though each still had some combat power remaining, whilst the Bavarians in the centre were fully effective.  I'm really not sure which way it would have gone, had we played for longer!

Mistakes?  Sure, I made some.  Most obviously, I should have double-checked whether infantry that are threatened by cavalry must form square or if this is only may form square.  I also need to re-read the rules for manhandling artillery and I need to dig out my gun teams and limbers so as to give the players more choices there.  I should re-read the bits on free moves in the face of the enemy.  There's probably more, but that'll do for now...