Since this week's Games Club night was the day before Halloween, I decided to host something involving spooks and other night terrors.  I'm something of a traditionalist at heart, so I chose to put on a 72AP game of Hordes of the Things (HotT), pitting the resurgent Knights of Lyonesse against my undead army: the Cabal of the Black Hand. 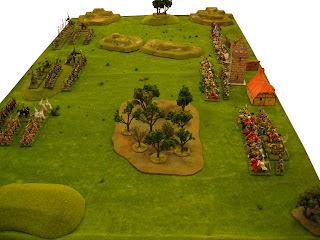 As before, the forces of Lyonesse comprise many noble knights with a scattering of heroes, an aerial hero (Bertrand de Fleury, a distant relative of Sir Alain Fleury who died fighting goblins here) and a paladin (Saint Florence of Artenay).
Against them, the Cabal's army is led by magicians and has hordes of ghouls, skeletons and zombies.  Also of note: the near flank has some sneakers (ghosts/spirits), the centre has an evil undead hero and many bats, while the far wing has a large mounted contingent.

The small border village of Valence-sur-Aignan is under threat from an invasion of evil creatures, worshipers of darkness.  To protect the village, the Knights of Lyonesse have ridden hard since their victory over the goblins in the Black Mountains (here).  Will their valour be strong enough to save the townsfolk, or are they too tired to resist the forces of evil?  Read on... 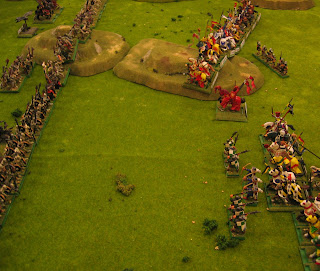 In the centre, the Cabal's hordes shambled forwards as fast as they could (which wasn't very fast!).  The far wing of Knights started to move out to meet the undead cavalry, but then hesitated and ground to a halt (very poor dice rolls for PiPs).  In the centre, long-range magic was very effective at disrupting and destroying the Lyonesse infantry.  It looked as if the Cabal had chosen well in mounting their invasion near Halloween; the dark gods were favouring their dice rolls considerably! 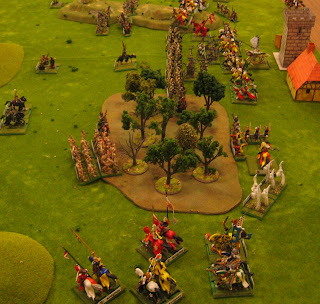 The story was much the same on the near wing.  A combination of fast-moving sneakers and bats plus hostile magic served to break up the Knight's forces.  Meanwhile, the undead hordes advanced through the woods, obliterating everything in their path (mostly squirrels). 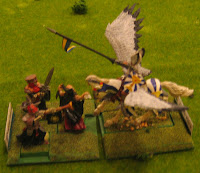 It looked as if the Cabal had made a slip, though.  Bertrand de Fleury saw the enemy commander-in-chief casting spells a long way from his troops.  The hero spurred his winged horse into the air, flew over the battlefield and challenged the horrible wizard to a duel.  However, the magician cast a dark web over Bertrand and his steed, ensorcelling and capturing both of them! 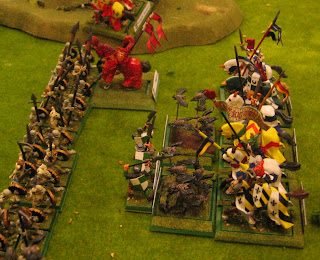 In the centre, the Cabal sent huge flocks of bats forwards to pester and confuse the knights.  The men destroyed most of the critters with ease, but again this caused them delays and broke their momentum. 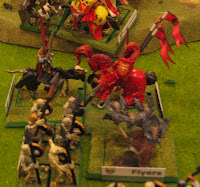 In the swirling melee, the Red Knight came face-to-face with the undead champion.  He was still distracted by swarms of bats and this was his downfall: the boney wight wounded him and the knightly hero fell. 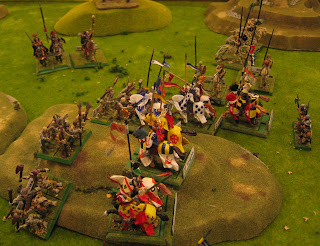 It was the far wing of the army of Lyonesse that was the first to flee.  The skeleton riders crunched through their terrified human counterparts.  Hampered by indecision (poor PiP rolls), the knights had little chance to react and were routed by the rampant undead.  Even some of the hordes managed to kill the knights who tried to face them, the Cabal's forces were so outrageously lucky! 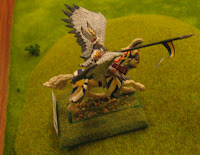 Bertrand de Fleury finally managed to escape from his captivity and return to the field.  We'll never know how he managed this, for he returned just as the central command of the knights' army also became demoralised.  Bertrand took one look at the devastation and fled (and wow - Aerial Heroes can flee a long way!).

It was up to the near wing of the army of Lyonesse to attempt to regain some honour.  By now, some of their cavalry had managed to circumvent the dark wood and trickled in to attack the pair of chanting wizards who commanded the opposing forces of darkness.  The first knights to attack were fried to a crisp by a well-placed fireball from the junior magician; the senior spellcaster didn't even deign to notice the attack. 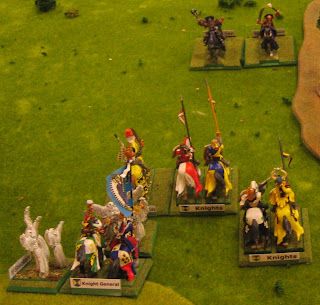 The ghosts assailed the knights' commander, confusing him with visions of his dead ancestors.  Although he managed to shake off these apparitions, he was then unable to join in the assault on the Cabal's leaders. 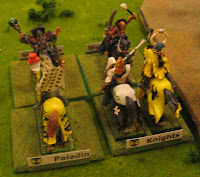 Finally, some of the forces of Lyonesse managed to charge the Cabal's nearest sorcerers.  Saint Florence slew the lesser magician in a fit of holy righteousness, but once again the ordinary knights who attacked the other wizard were destroyed by foul magics.

This last loss, combined with the destruction being wrought by the undead hordes emerging from the far side of the woods, was the final straw.  All 3 Lyonesse commands were now in full retreat, whereas the armies of darkness were barely damaged.  There must have been something in the air that night, for the knights lost pretty much every die roll that mattered, while the Cabal won theirs.  Truly the townsfolk of Valence-sur-Aignan would remember All Hallows Eve with horror!

Email ThisBlogThis!Share to TwitterShare to FacebookShare to Pinterest
Labels: Batrep, Cabal of the Black Hand, Halloween, HotT, Knights of Lyonesse