HotT: The Valley of Death! 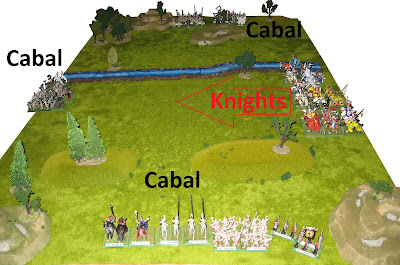 This week at my local games club in Helensburgh, I hosted a game of Hordes of the Things (HotT).  However, rather than a stand-up battle between 2 equal forces, I decided to run a Breakthrough scenario of my own devising.
It's very simple: the Knights of Lyonesse are returning from an expedition to the badlands when they are ambushed by necromancers from the Cabal of the Black Hand.  The knightly forces total about 50AP, whilst the Cabal's undead are 70AP or more (i.e. outnumbering the smaller force by around 3:2).  However, the ambushers are split up and some are disadvantaged by having to cross a river to come to grips with their foes.
Victory is decided by the number of knights who manage to escape off the opposite table edge.  If half the knights escape then they score a major victory.  If none of the knights escape then the Cabal wins crushingly.  Any other result can be judged on its own merits! 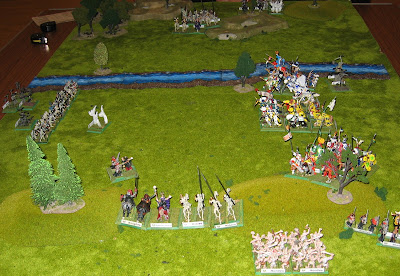 Initially, the southern Cabal army advanced swiftly.  The blocking force shook itself out into a line of skeletons, leaving masses of bats behind them.  Both northern groups were on the wrong side of the river to be immediately effective, though they did send a very large bat across to threaten the knight's rear.
All 3 columns of knights advanced in their march formations.  This was a dangerous choice as it left the lead elements very vulnerable to recoils in combat, but it did mean that they could move all their units for a minimum command effort. 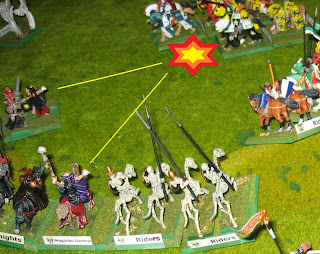 Disaster struck the knights as magicians targeted the central column.  With no way of recoiling, their general was the first to die.  The loss of their commander would make it much harder for this group to move, just when it needed to engage the enemy. 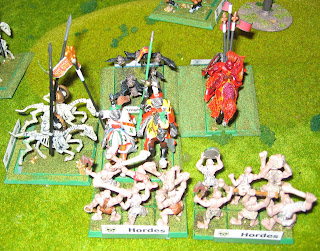 The southern column of knights changed into a line and charged over the hill to engage the hordes of ghouls on the other side.  Their general ploughed through the first rank of the enemy easily enough, but was held up by the second line.  Within moments, he was surrounded and despite fighting valiantly, he also fell.  2 of the 3 commands of knights were now leaderless, almost before the battle had begun.  Their prospects now  looked grim indeed! 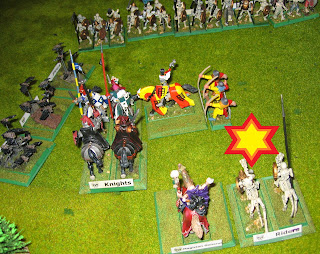 The central group of knights attempted to charge through a hole in the undead ranks, but the gap was quickly filled with swarms of rank bats.  Outnumbered and surrounded, they took terrible losses through a combination of foul magics and flank attacks.  Even the Paladin, Saint Florence of Artenay, could not stand against the skeletal horsemen under these cicumstances.  Of course, once the saint was lost then the remaining few knights were greatly more susceptible to hostile spells. 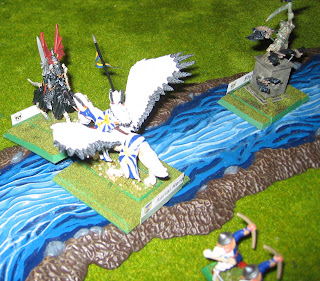 Back near the river, a lone group of blue and white liveried archers had been left to act as a rearguard.  They shot the giant bat out of the sky and drove off its lesser relatives with accurate archery.  Seeing this, the Cabal sent an evil hero to kill them.  However, before the wight could cross the river, Sir Artois de Beaumain flew overhead on his winged steed and challenged the undead lord to a duel.  The fight was a rather soggy affair since both heroes were in the river, but the Cabal's champion unhorsed his opponent with a roll of '2' to the knight's '1'. 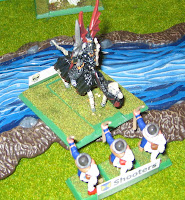 The victorious wight then charged the archers, but they turned and shot him down as his steed tried to scramble up the muddy riverbank. 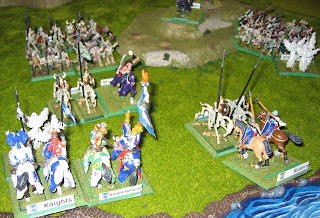 Seeing the debacle in the centre, the northern body of knights forged their way across the river in a vain attempt to break through.  In doing so, they were facing terrible odds, the running water would no longer protect them from evil magic and they would have difficulty in retreating (should the need arise!)

Run for your Lives! 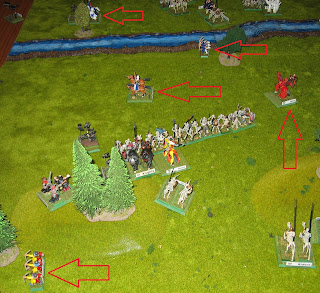 Soon, many of the knights had fallen.  A remnant of the southern force still held on, but they had barely moved from their starting point and couldn't disengage from the Cabal's heavy infantry.  Elsewhere, the scattered fragments of the forces of Lyonesse fled through any gap they could find.  But how many of them could escape? 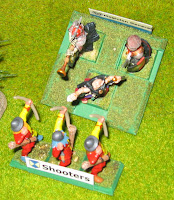 The red/yellow archers almost made it, but were assaulted by no less than the chief Cabalist himself.  They were swiftly reduced to piles of smoking ashes. 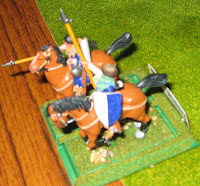 The fast scouts dodged all enemies and fled for safety...

...followed soon after by the blue/white knights, though these had to fight their way through swarms of bats to make their getaway. 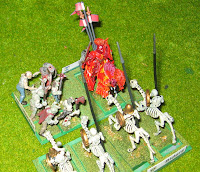 However, the Red Knight was caught and brought to bay by hordes of the undead.  He was too stout a hero to fall immediately, but escape now looked impossible for him.  Elsewhere on the battlefield, the other remaining knightly hero (the Castellan) was still holding out, though again he was surrounded and his fate seemed inevitable. 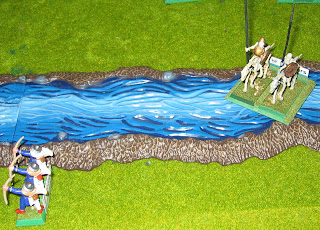 Finally, the valiant blue/white archers had a clear line to safety, with only a single enemy rider slowly crossing the river to pursue them.  Would they make it?  Time ran out and the game was packed away before we could find out!

Well, that was my first foray into scenario-based HotT gaming!  Both sides claimed a victory, Lyonesse on the basis that some of their forces escaped, whereas the Cabal declared the result to be a massacre.
The knights' early decision to advance in a dense column turned out to be a disaster, as they quickly lost a number of significant models for no return.  They could, perhaps, have achieved local superiority over one of the nearby Cabal armies if they had engaged them quickly enough.  But there was always going to be a balance to be made: who fights and who flees?