Full Thrust: How to blow up a planet

The Emperor has discovered the location of a secret Rebel base; it's on a jungle planet in the Draconis system.  At the same time, his latest terror weapon, the starship "Planetary Stabiliser", has just been completed.  He could test the new mega-ship and crush the rebellion mercilessly at the same time.  All his admiral has to do is sail up to Draconis IV and vaporise the planet! 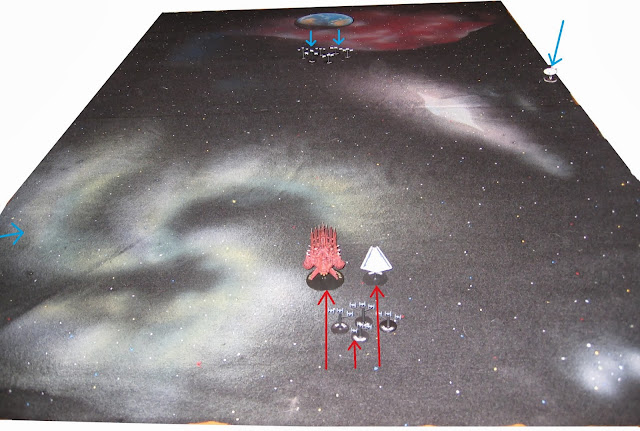 There are limited local defences available on or near the planet.  In addition to that, the defenders are racing reinforcements to the Draconis system - but they will arrive piecemeal. 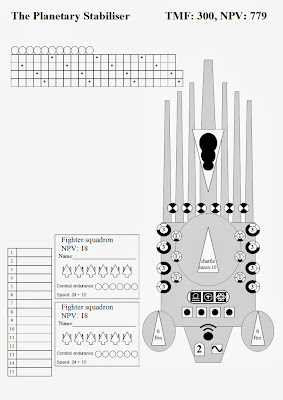 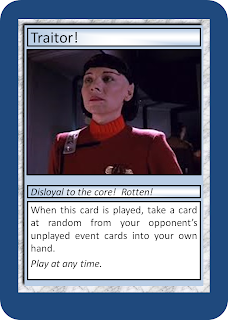 So, how did it play out for us?  Well, before the game even started properly, the Federation played a Traitor event card.  This enabled them to filch a potentially useful Reinforced Shields card from the Empire's set of cards.  Oddly, the Imperial admiral didn't seem too bothered by this.  Perhaps he simply expected treachery and was relieved that it wasn't worse! 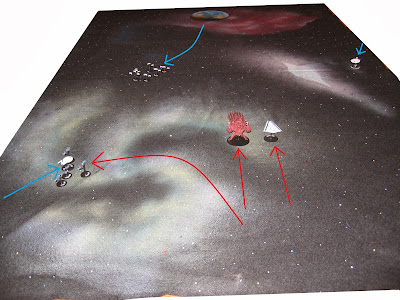 In the first turn, both the Imperial fleet (the "Planetary Stabiliser" and her consort, the battleship "Goliath") launched TIE fighters.  A large group of X- and Y-wing fighters took off from their planetary bases in response.
Reinforcements started to arrive from the Federation fleet.  On the right, a lone destroyer appeared, whilst the unluckiest corvette in the galaxy (USS Zhukov) warped in on the left.  The TIE fighter group immediately pounced on her and attacked.  They were so confident of success that one squadron saved its ammunition and didn't even bother to make a firing pass.  The Zhukov managed to shoot down a single attacking fighter before being torn to shreds. 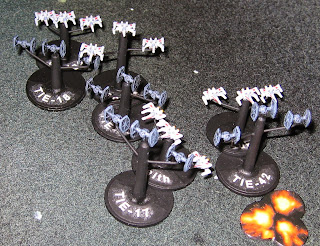 On the turn after this, vengeful X-wing heavy fighters pounced on the TIEs (the Y-wing bombers wisely stayed out of this fight!).  In an incredibly bloody melee, both sides rolled high and almost all the squadrons on both sides were destroyed.  Only 3 TIEs out of 23 and 4 X-wings out of 24 survived a single round.  One TIE managed to take out 4 X-wings all on its own with a succession of '6's (hmm, I wonder who was piloting that craft?) 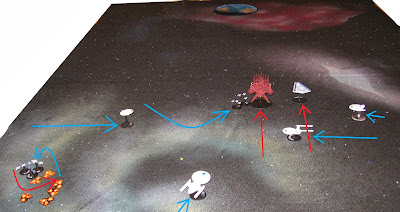 While the exhausted remnants of the fighter squadrons continued to dogfight and the Imperial flotilla plodded on doggedly towards the planet, more Federation ships arrived.  A destroyer and a frigate were placed to either side of the Imperial ships, but more significantly the light cruiser Los Angeles and the battlecruiser Invincible manoeuvred behind the Planetary Stabiliser.

The Y-wing bombers made an attack run on the larger enemy ship...

...but they were all shot down without causing any significant damage.  The smaller Federation ships were hammered mercilessly and even the Los Angeles misjudged its approach and ended up as target practice for the port batteries of the Stabiliser.  However, Invincible sat in a blind spot to the rear and began firing torpedo after torpedo into the bigger ship. 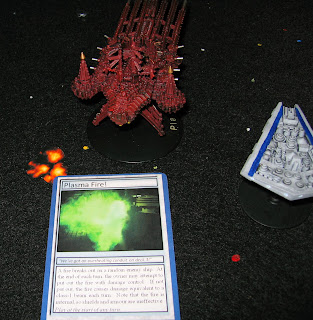 This was probably the Federation's finest moment.  Enough damage was caused on the Planetary Stabiliser to trigger a threshold check.  Even though each system would only be knocked out on a '6', the Nova Cannon was hit!  The Federation players were jubilant and immediately played a Plasma Fire event card on the big red craft as well, just to complicate things.

Sadly for the good guys, plentiful damage control parties on the Planetary Stabiliser managed to bring the Nova Cannon back on line and put out the fire immediately. 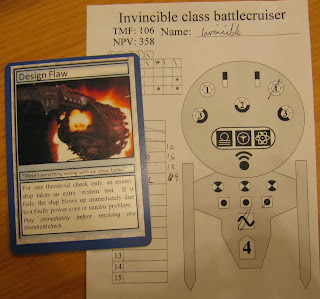 Now it was the Empire's turn to retaliate.  Although the Planetary Stabiliser couldn't fire on the pesky Federation battlecruiser (and had to console herself by swatting all the little Federation ships instead), her consort could!  The Goliath couldn't bring her full fire-power to bear to her flank, but she still did enough damage on Invincible to cause a threshold check on the Federation vessel.  To add insult to injury, the Empire also played a Design Flaw event card on Invincible: rolling a '6' would have resulted in her instant destruction.  The Federation breathed a collective sigh of relief when they rolled low on this test! 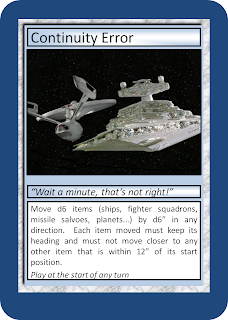 This wasn't the end of the Empire's nefarious plans, however.  At the start of the very next turn they played a Continuity Error event and rolled high (again!) for its effect. 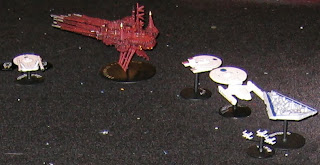 Suddenly the Invincible found itself not behind, but right in front of the Imperial battleship!  The last 2 X-wing fighters attempted to distract Goliath, but didn't achieve any real damage. 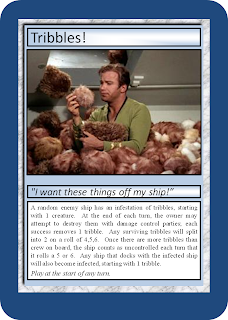 In desperation, the Federation revealed that they had smuggled some Tribbles onto the Planetary Stabiliser. 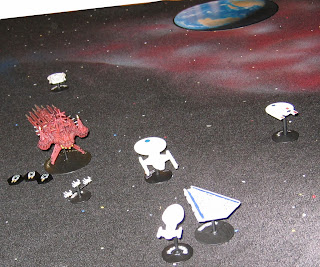 By now, more Federation cruisers were arriving.  Even as the crew of the pulverised Los Angeles abandoned ship, the Endeavour also approached from the rear, fast.  Sadly, before we could resolve any more attacks (or the Tribbles card), time ran out and we had to pack up.

Who won?  Both sides claimed a victory, of course!  I think that all the players enjoyed the game thoroughly (which is a victory in itself, of sorts!).  However, the Planetary Stabiliser had veered off course in a vain attempt to shake off Invincible.  She'd also taken damage to the Nova Cannon and although it was now repaired, I wouldn't wish to be the weapons technician who certified it as fit for heavy duty use!  On both counts, I think I'd give the Federation a marginal, if somewhat Pyrrhic, win.

Bonus points to any reader who knows the origin of the name Planetary Stabiliser, without Googling it first!