In the small Western town of Pike's Crossing, many people held grudges.  Cowmen hated the sheriff, newcomers hated the established families, whiskey drinkers hated beer drinkers and those who opened their boiled eggs at the pointed end hated those who cracked them at the blunt end.  One hot Saturday evening everything boiled over into a massive brawl... 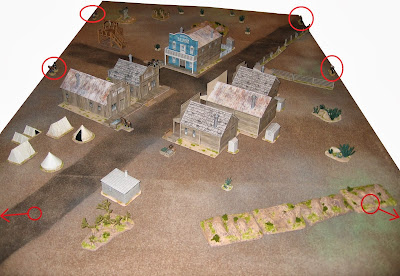 What do you do when you have 6 kids at the club wanting to play your game, most of whom haven't played "The Rules with No Name" before?  I could have tried to concoct some frighteningly subtle and layered plot with which to entertain.  However on this occasion I chickened out and declared a free-for-all!

Each of the 6 sides would receive one experienced gun-slinger (either Legend or Shootist rank) as well as a not-so-good sidekick (Gunman or Citizen rank).  The winner would be the last man standing.

Unlike most of my battle reports, this game quickly became very chaotic (no, really?).  Rather than try to give a blow-by-blow account of the action, I'll just mention some of the more memorable moments.

From the start, the 3 players on the left declared a truce; they all charged across the board as fast as they could.  The funny thing is that 2 of them actually seemed to believe that the alliance would hold for the entire game...

Emmett (Legend) shows how it's done by running round the corner of some outcrops and shooting Deputy Rex in the leg, all in the same action!

After Deputy Rex recovers enough to stand up, Old Pete (Gunman) tries the same action.  All he achieves is to jam his own gun.

Jesse (Shootist) shows his strength by charging Deputy Rex and flattening him with a couple of solid punches. 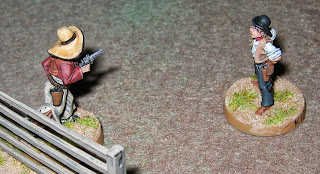 Juan (Citizen) turns on a surprised Kid Shelleen (Citizen) and fires on him.  And fires again.  10 dice of blazing away without any result.  Kid Shelleen then recovers from his bemusement and blazes away in return.  He's slightly more successful: Juan takes a flesh wound, promptly fails a nerve check and spends the rest of the game curled up in a ball beneath the fence, calling out "I'm so sorry, señor - it was an accident.  Please don't shoot me!" 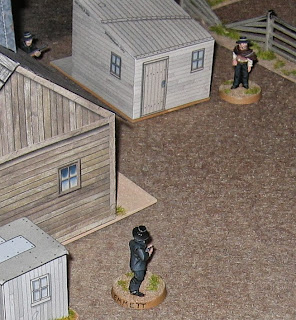 The 3 Legends meet up in a confused fire-fight with much ducking back behind cover.  Sheriff Roberts (top left), after spending the first half of the game in the saloon's outhouse, misses Blondie with his shotgun at a range of 4.5"!

By the end of the game, Deputy Rex had been knocked unconscious, disarmed and tied up.  Deputy Eddie was unconscious with a serious wound and Juan was blubbering like a baby.  2 or 3 other characters had taken wounds, but no one had died!  Of course, this meant that all players claimed a victory, though personally I think that the Deputies' player didn't have a leg to stand on (ha ha...).
Posted by Colgar6 at 20:31