On the remote planet of Tantalus III, contact has been lost with a remote scientific base.  A reconnaissance aircraft that was sent to overfly the area has crashed nearby, for reasons unknown.  Finally, the Viridian Planetary Defence Force has ordered in some infantry to investigate and secure the area.  Of course, resources are tight and so the PDF are a mixture of regular grunts and unenthusiastic militia.  I'm sure that most 18+ readers can guess where this is going... 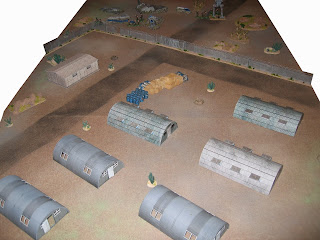 The base consists of a number of huts surrounded by a perimeter fence.  There's also a big pile of supplies near the gate.  The fence is breached in at least one location, though there is no sign of life anywhere.

The PDF have to investigate each hut for survivors or other evidence and then return the way they came in order to report their findings to higher authorities.  For some reason, there's a lot of interference with their communication equipment near the base. 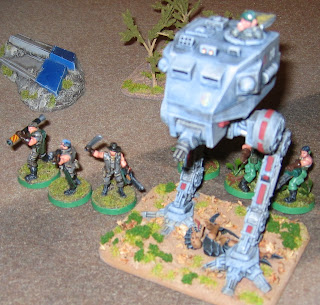 Making their way through the wreckage of the reconnaissance craft to the right are 3 more squads (2 regular with a single chaingun and 1 militia with a grenade launcher). 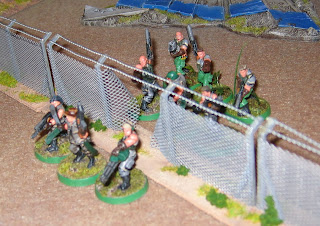 Everything was quiet as the PDF squads started to move through the hole in the perimeter fence. 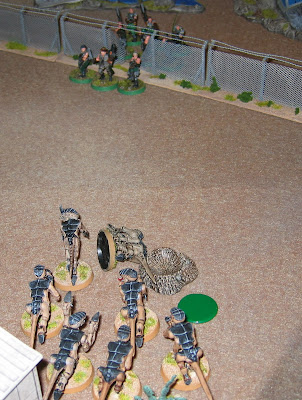 This was the point where a small swarm of bugs erupted from a tunnel near to the first building.  Immediately, the creatures raced round the corner and straight towards the troopers. 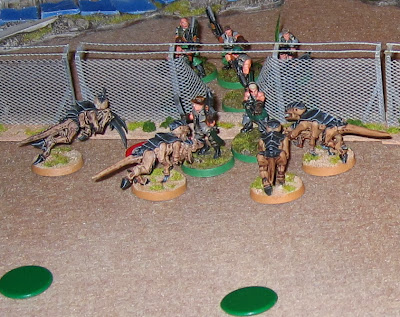 The front squad managed to gun down a few of the bugs as they approached, but not enough to avoid being assaulted by 8' long chitinous monsters!  One trooper fell immediately, torn apart by the ferocity of the attack.  However the other 2 (the squad leader and the blonde chain-gunner) both held their own, even when faced by 2 bugs at once. 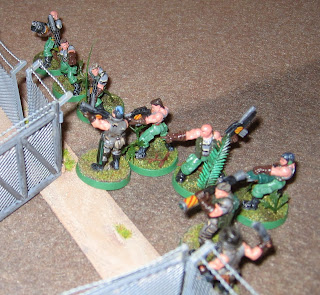 Rather than get involved in the fracas at the fence breach, the militia squad from the left ran sideways "to help open the gates". 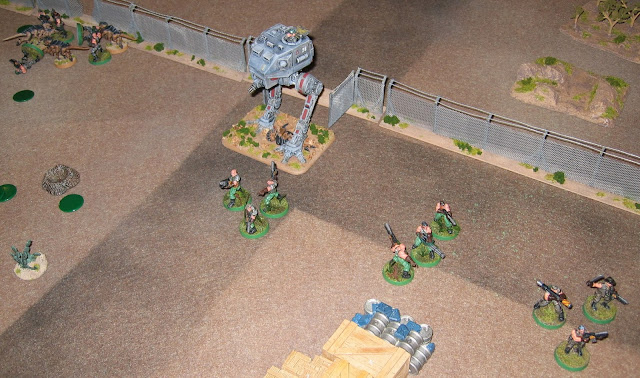 Once inside the base, the 3 squads from the gates fanned out and started to search all the buildings (a good Scooby Doo moment: "let's split up and look for clues").  They spent much of the rest of the game doing this, but without finding anything of interest. 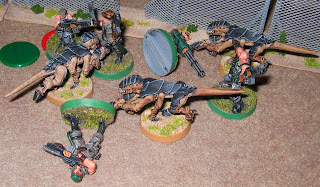 At the breach, the second squad of regulars couldn't fire into the melee without risking hitting their comrades.  Instead, they decide to charge into hand-to-hand combat (!).  Even though the humans outnumbered the bugs 5 to 3, the troopers kept losing every fight.  Fortunately, for some reason, the bugs only managed to knock down the soldiers instead of slaughtering them, time after time. 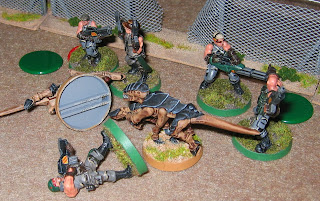 At one point, it even looked as if the humans were winning.  Blonde chain-gunner managed to pick herself up off the dirt and kill the bug that was attacking her, just as the remains of the second squad knocked down their opponent. 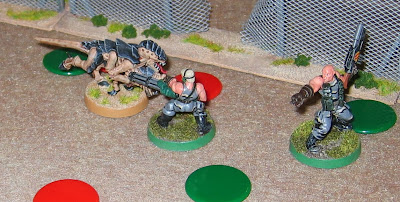 Yep, she's still going.  Blondie tried to save a colleague by charging into yet another melee, but ended up facing the last bug on her own. 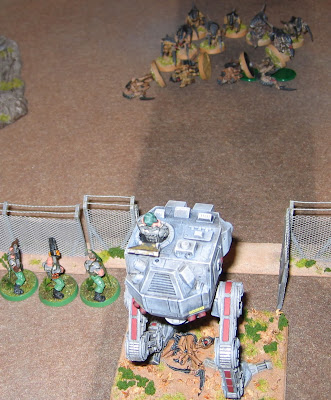 Just then, another group of bugs erupted from beside the road, just outside the base.  The Valkyrie pivoted on the spot and started hosing the swarm with its vulcan cannon.

In this, it was aided by one squad of militia, though their fire was more noise than substance.  In particular their grenade launcher guy, who could have made a huge difference if he'd hit the tightly-packed bugs, managed to hit just about every other piece of scenery apart from where he was aiming! 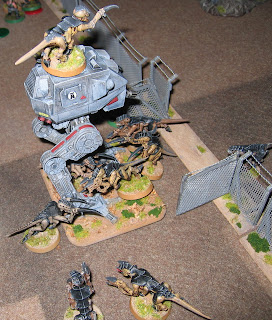 Once the bugs closed with the walker, there was little it could do to prevent the creatures from clambering all over it, tearing out cables and jamming moving parts.  A few critters fell off and were crushed as they climbed the machine, but most were nimble enough to cling on.

Within moments, the machine suffered multiple systems checks (requiring a turn of activation to reset before it could do anything) and the motors in one of its legs were badly damaged (so it had difficulty in moving).  Although the crew were safe inside the armoured cabin for the moment, it was only a matter of time before the bugs would strip the machine of all its working parts. 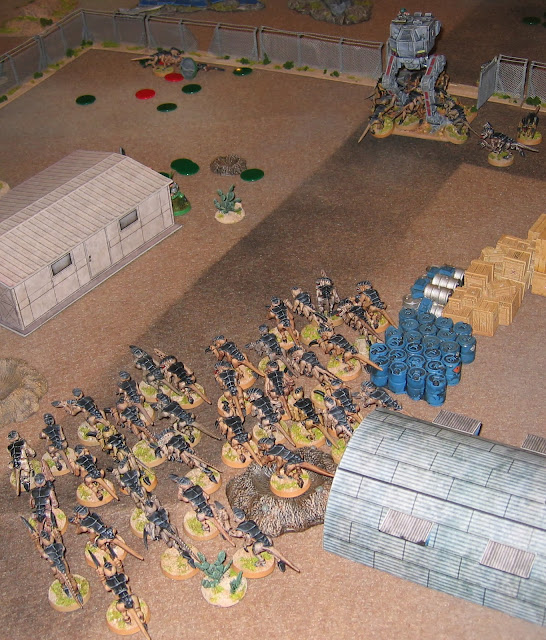 A third bug hole appeared, this time in the middle of the base.  This swarm was much bigger than the previous two and it should have been obvious to any observer that the remaining humans had no chance at all if they stayed. 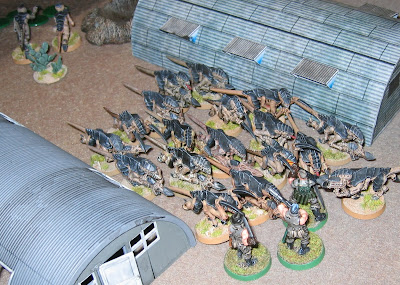 The humans were jubilant as the squad with the missile launcher managed to land a round right in the middle of the new swarm, killing or knocking down 7 enemies.  There were lots of (metaphorical) high-fives and "oorah"s from the soldiers.  The bug player just shrugged and ate them up anyway. 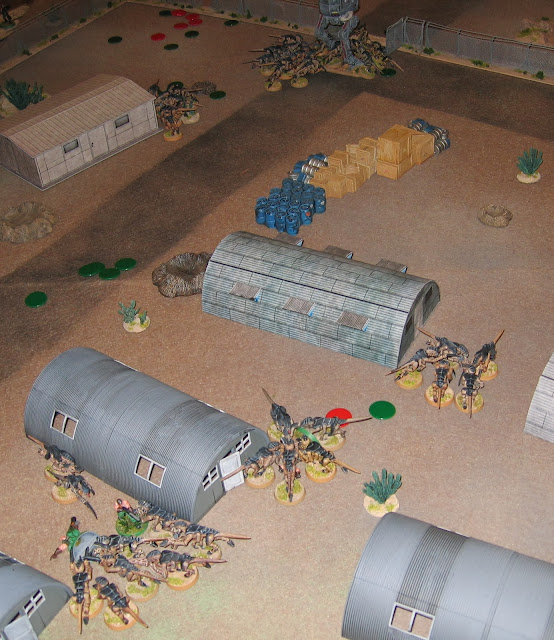 The final scene, as groups of bugs hunted down the last few PDF soldiers, was not a pretty one.  Some of the militia tried to run for shelter inside a hut, but didn't quite make it to the door before the swarm caught up with them.  No-one lived to tell the tale!

For anyone who thinks that this all seems very familiar, I did run a somewhat similar game some time ago: http://colgar6.blogspot.com/2012/11/5150-installing-acoustic-sensor-net.html.  In both games, the players stuck to their assigned objectives way past the point where they might have realised how impossible they were.  Sometimes you have to know when to run away!

The next time I bring the Viridian PDF to the games club, I think I'll have a completely different set of enemies (or maybe none at all!).  The players will be so fearful of "bugs" that they'll not even consider any other possibilities.  Mua-hah-ha-ha!
Posted by Colgar6 at 10:52