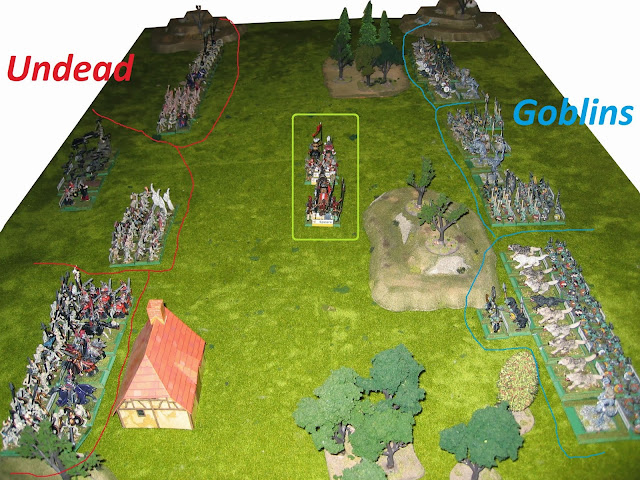 This week's battle at the Helensburgh Games Club was a 3-way affair using the  Hordes of the Things rules.  However, it's been a crazy week (amongst other things, there was an open evening at the local secondary school and also I was made redundant), so I've not got round to reporting the game until today.  Even now, I think it'll have to be a very cursory article.

I described this as a 3-way battle.  Actually, the scenario is more a 2-way fight with a few distractions...

The story goes thus: a small band of mercenaries is escorting a tax collector and his takings when they are ambushed by not just 1, but 2 separate armies.  The tax collector's forces must try to escape (fat chance!); each of the attackers can win by capturing the cart which contains the tax money. 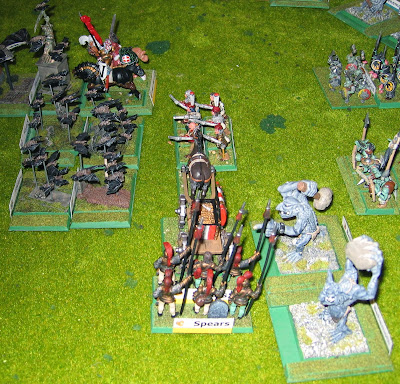 The mercenaries tried to make a run for it, but almost immediately they were caught between marauding goblins and trolls (on the right) and swarms of bats from the undead army (on the left). 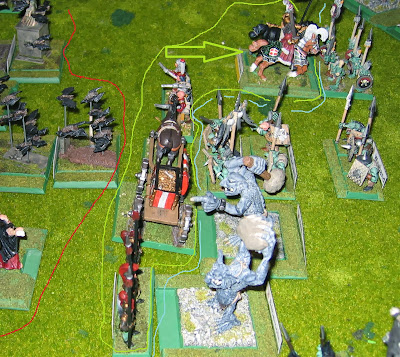 Most of the mercenaries were wiped out very quickly, but one persistent group of spearmen faced off against a huge troll for much of the game.  Also, the tax collector and his knightly bodyguard broke through hordes of goblins and nearly managed to escape. 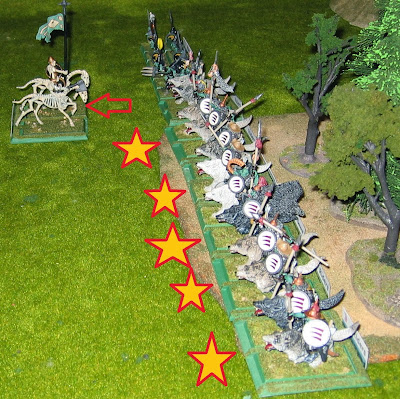 In the north, a line of goblin wolf riders met an equal line of skeleton horsemen near the edge of the forest and all but obliterated them.  As one player said "dogs like bones".

The tax collector finally broke free from the encircling hordes, but then ran straight into a pair of trolls and was squashed.

As he did so, the goblins' ballista had a clear line of sight to the undead army's flocks of bats.  The artillery showed remarkable efficiency by shooting down several bat swarms in a row (were they using cannister or chain-shot, I wonder?) 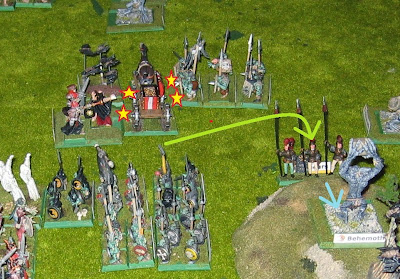 This wasn't the end of the mercenaries, for 1 particularly feisty element of spearmen had chased off the troll that had attacked them near the wagon.  These infantry were so fired up that they followed the monster up a nearby hill, jabbing at it with their pikes whenever it tried to stop.

At the treasure cart, the fight degenerated into a vulgar tussle as generals from both the goblin and the undead armies fought over the loot.  It was easy enough for each to recapture the wagon, but they never had a chance to drag it away before the other side counter-attacked!

And that's pretty much how the game ended.  There were fights elsewhere, but none were conclusive and all 3 sides claimed that they might have won if we'd been able to continue.
Posted by Colgar6 at 19:42