Very recently, someone posted a link to their blog article on The Miniatures Page.  That's not unusual, of course (done it myself a few times!), but what caught my attention was that the author had collected links to a number of dolls' house manufacturers who made smaller-scale items.  I'm annoyed that I cannot remember the original author, in order to give him proper credit for inspiring me!  [Edit: Zabadak has correctly identified the original post as coming from Shedwars.  Thanks to both Zabadak and the author of Shedwars]  Here's what happened next...

I looked through the catalogues for the various dolls' house manufacturers and filtered out most of them.  Either they were too expensive or they only had a very small range in a scale that might suit me.  However, one company really caught my eye: Petite Properties.  They have a large range of cottages, houses, churches and the like in 1:48 scale.  They also sell a lot of smaller items with which to furnish these houses or their gardens and surroundings.  Since the prices were fairly cheap, I thought that I'd buy a few kits as testers.

The remainder of this article describes the 3 kits I've build (or part-built) so far, though none of them are painted yet.  I've shown them with some half-painted "28mm" figures beside them so that you can judge the size and decide whether the 1:48 items are too large.  Note that I've used quotes around "28mm"; the young man with the suitcase (from Reaper) is more like 31mm base-to-eye.  The woman with the golf club (Wargames Factory) is a digital sculpt and is probably the truest shape and size of the 3 figures.

This is a sweet little kit with a surprising number of parts to it.  I don't think I'd recommend it for raw beginners (some of the pieces are very small), but it should be straightforward for most modellers. 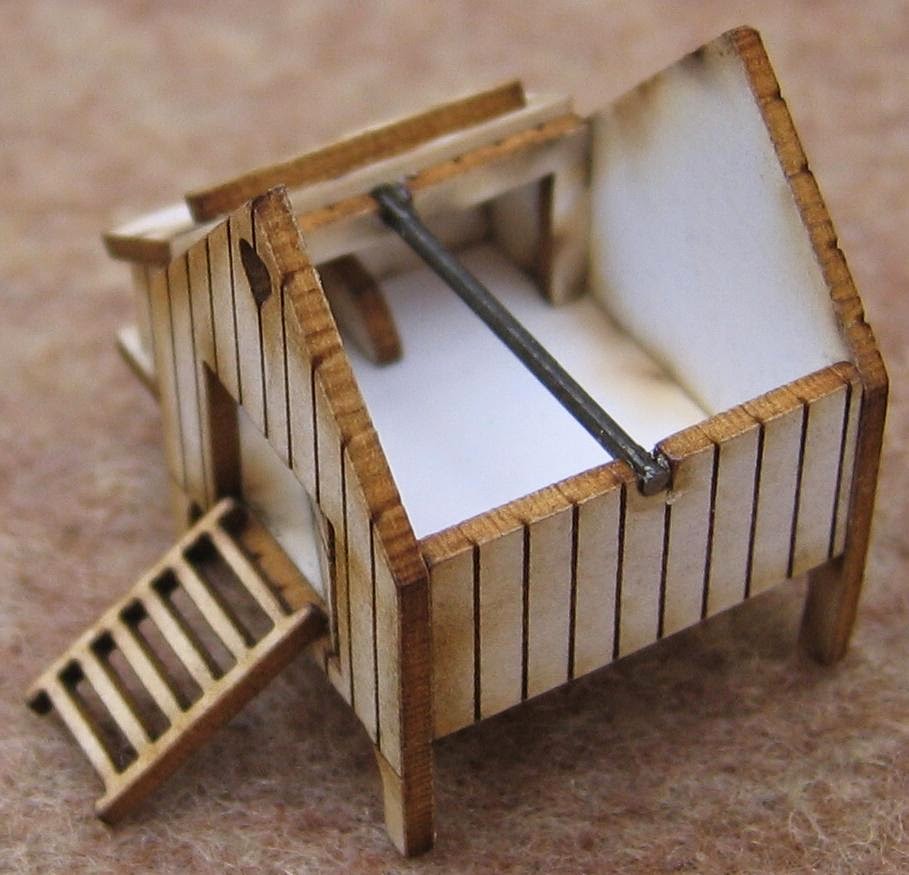 Amazingly, the hen house even has a removable roof and detailed interior - a roosting bar and divided nest box!  The cost of this kit is £1.75. 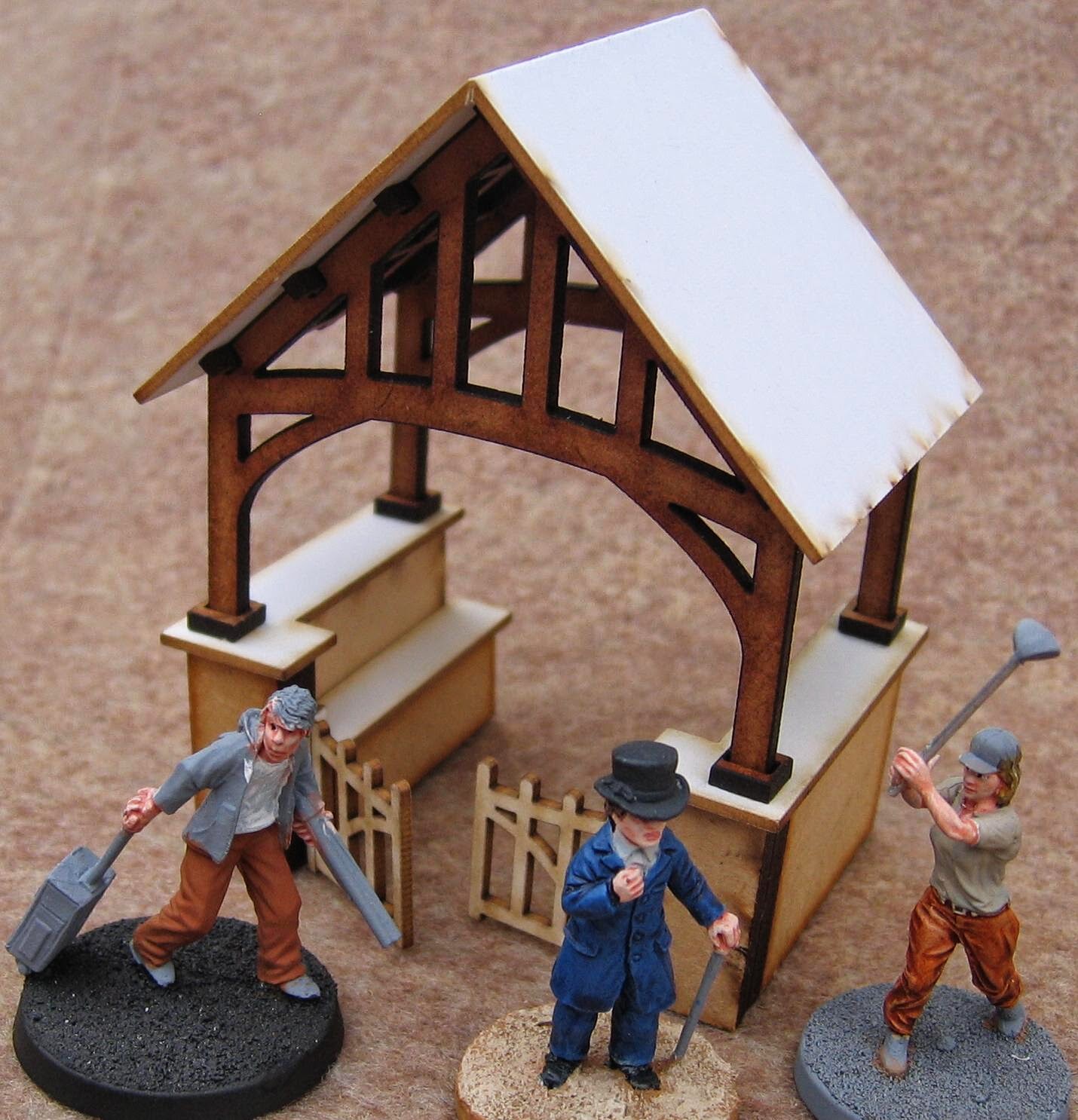 A lych gate is a covered, gated passage often found at the entrance to churchyards in England (and elsewhere?).  I plan to use this as the way into a "gothic" graveyard - when I eventually get round to that project. 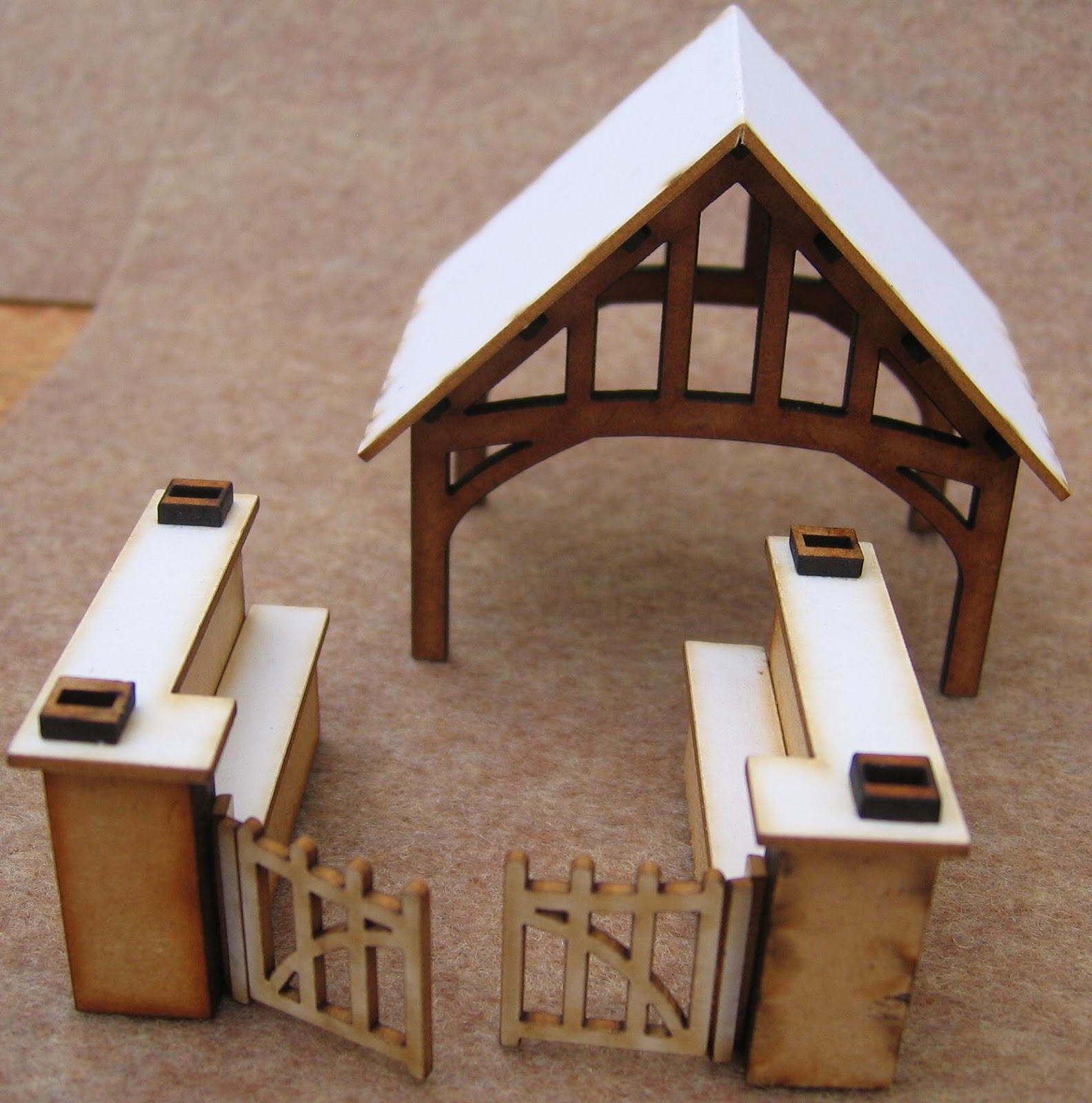 This is a much more substantial structure than the other pieces in this article, but for all that it wasn't too hard to build.  The walls were probably the most tricky - and that only because some blocks of 3mm MDF needed to be "doubled up" to produce 6mm thick parts.  Cost: £5.99 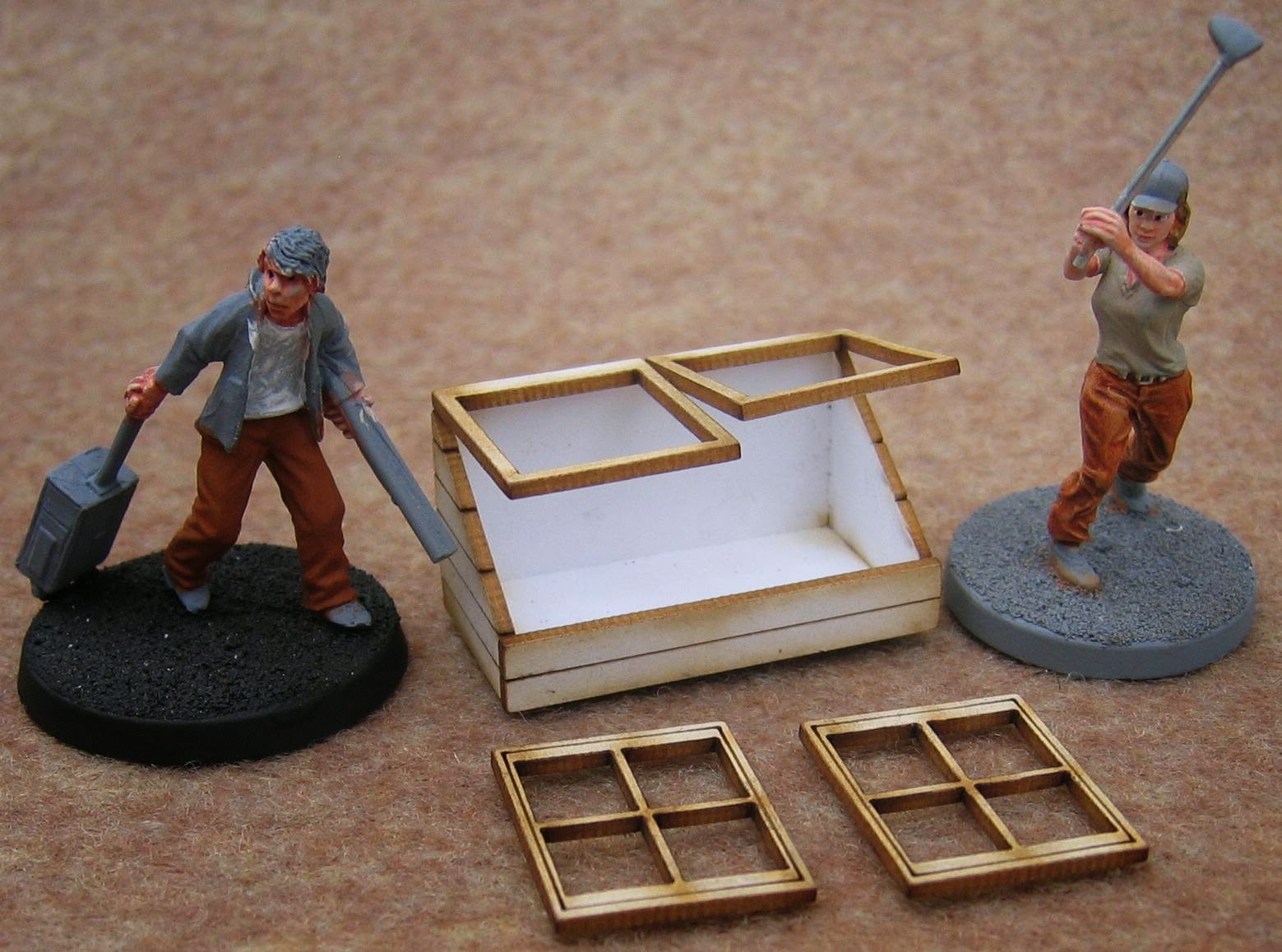 I haven't finished building this model, for the obvious reason that I need to paint some or all of it before sticking the windows together.  Acetate squares are supplied for the glazing, though I haven't shown them in this picture.

This was probably the simplest of the 3 kits to build; it's certainly the one with the fewest parts!  Once again, the cost is £1.75

I'm very happy with the way these models so far.  They're a touch big for 28mm figures, but of course the figures have a base which adds to their height and this helps to hide the difference.

As well as entire buildings and the outdoor elements that I've shown here, Petite Properties also make plenty of indoor furnishings including packs to furnish an entire schoolhouse or church.  I can see these being very useful!  The style of their ranges is very definitely centred around a slightly romantic 1930s English village, but I don't see why much of their product couldn't be used in other time periods or other geographical areas.  Have a look for yourself!